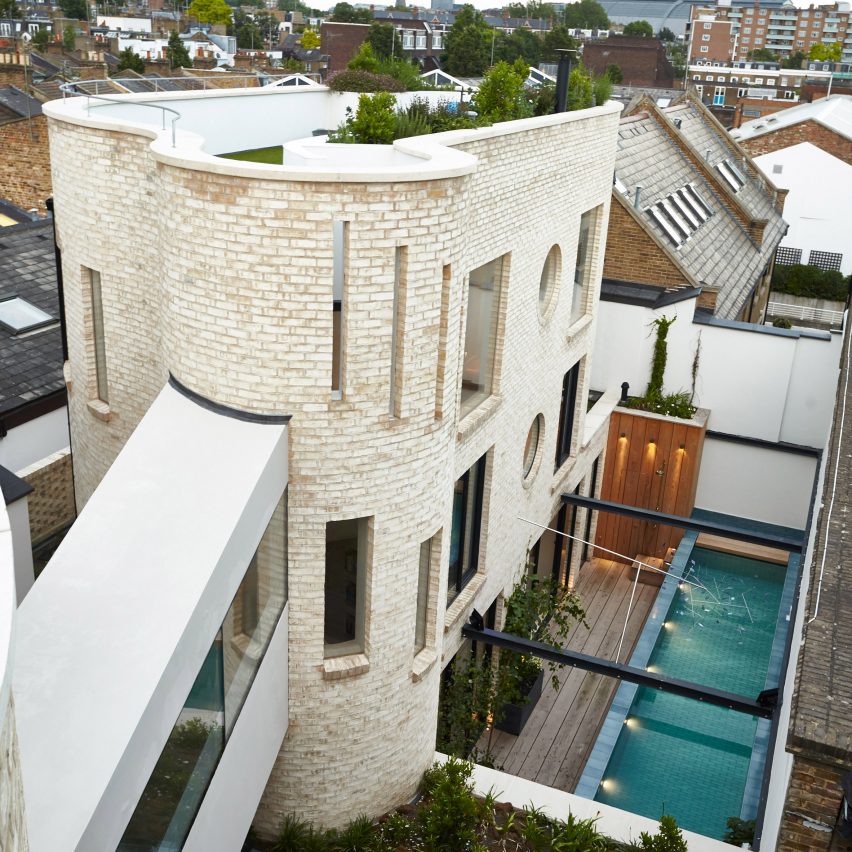 London architect Alex Michaelis, co-founder of Michaelis Boyd, has designed a home for his family as a “striking, contemporary take on Corbusien modernism”. 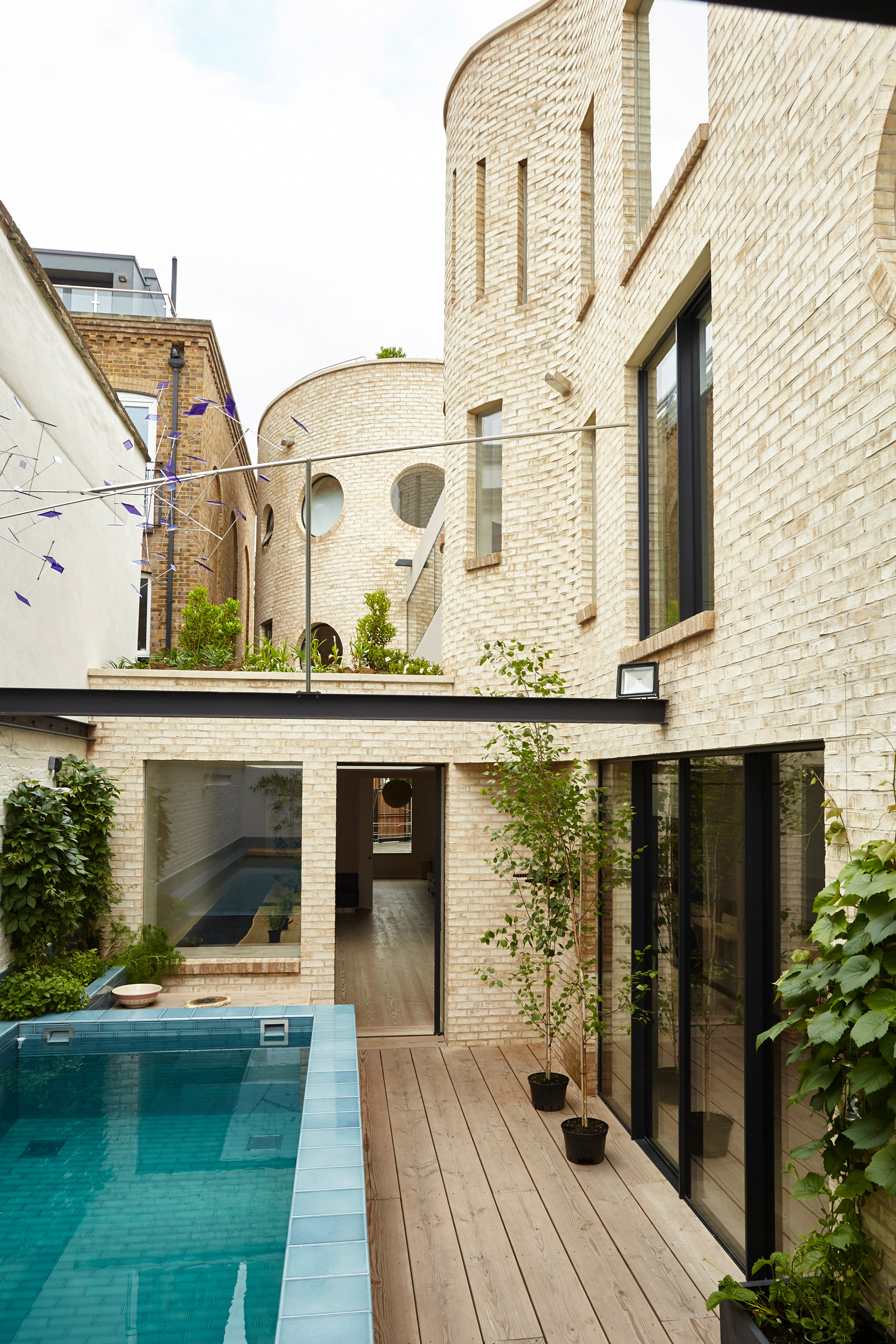 Michaelis completed the residence for a “challenging long and narrow site” on Blythe Road in West London’s Hammersmith area, in place of a disused garage that was demolished. 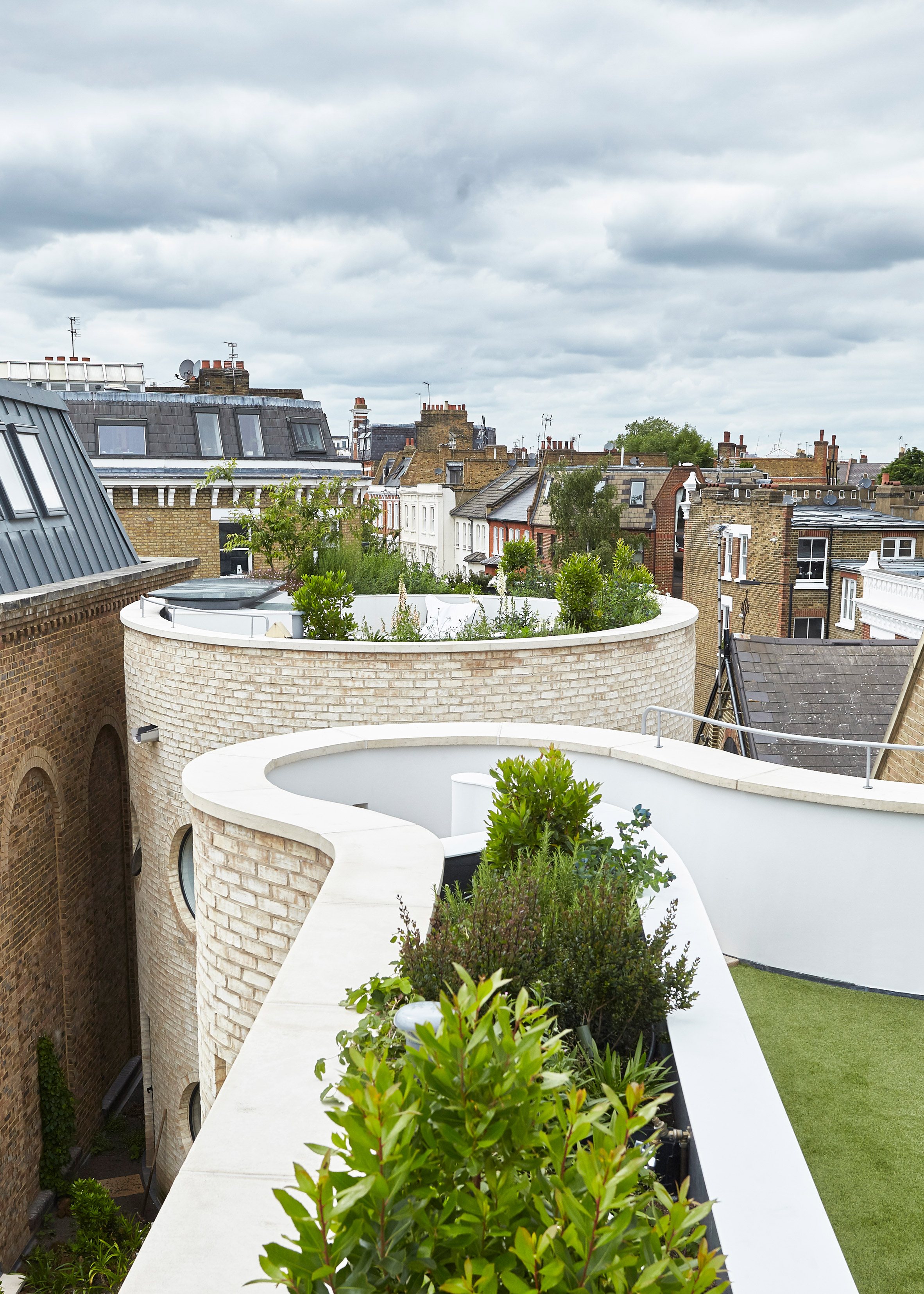 The British architect, who founded his firm with Tim Boyd, said the design takes cues from the work of 20th-century architect Le Corbusier. 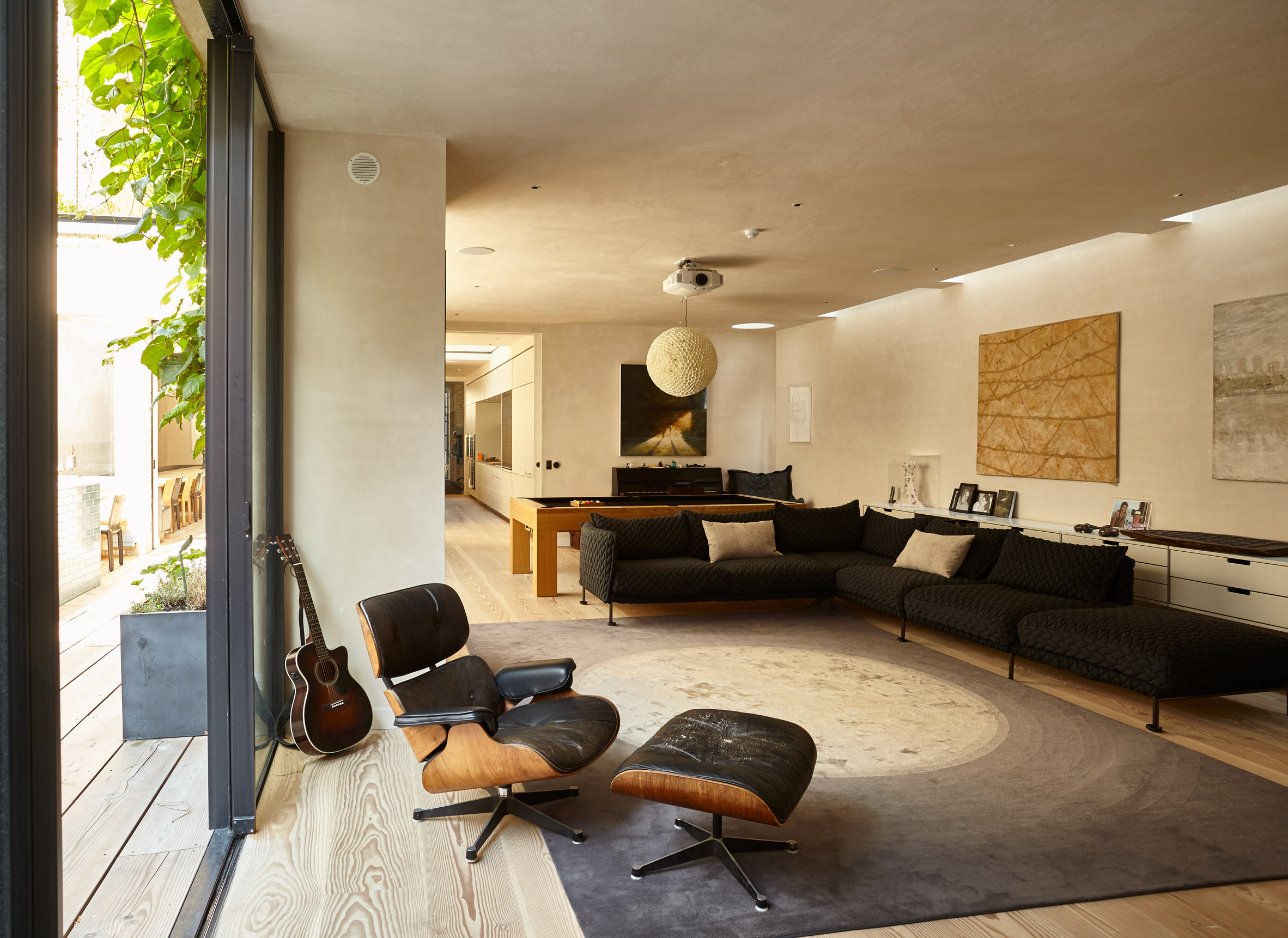 “The design is a striking, contemporary take on Corbusien modernism employing geometric and sculptural forms, sliced open with dramatic glazing that offers a unique and unparalleled experience of city living,” Michaelis said. 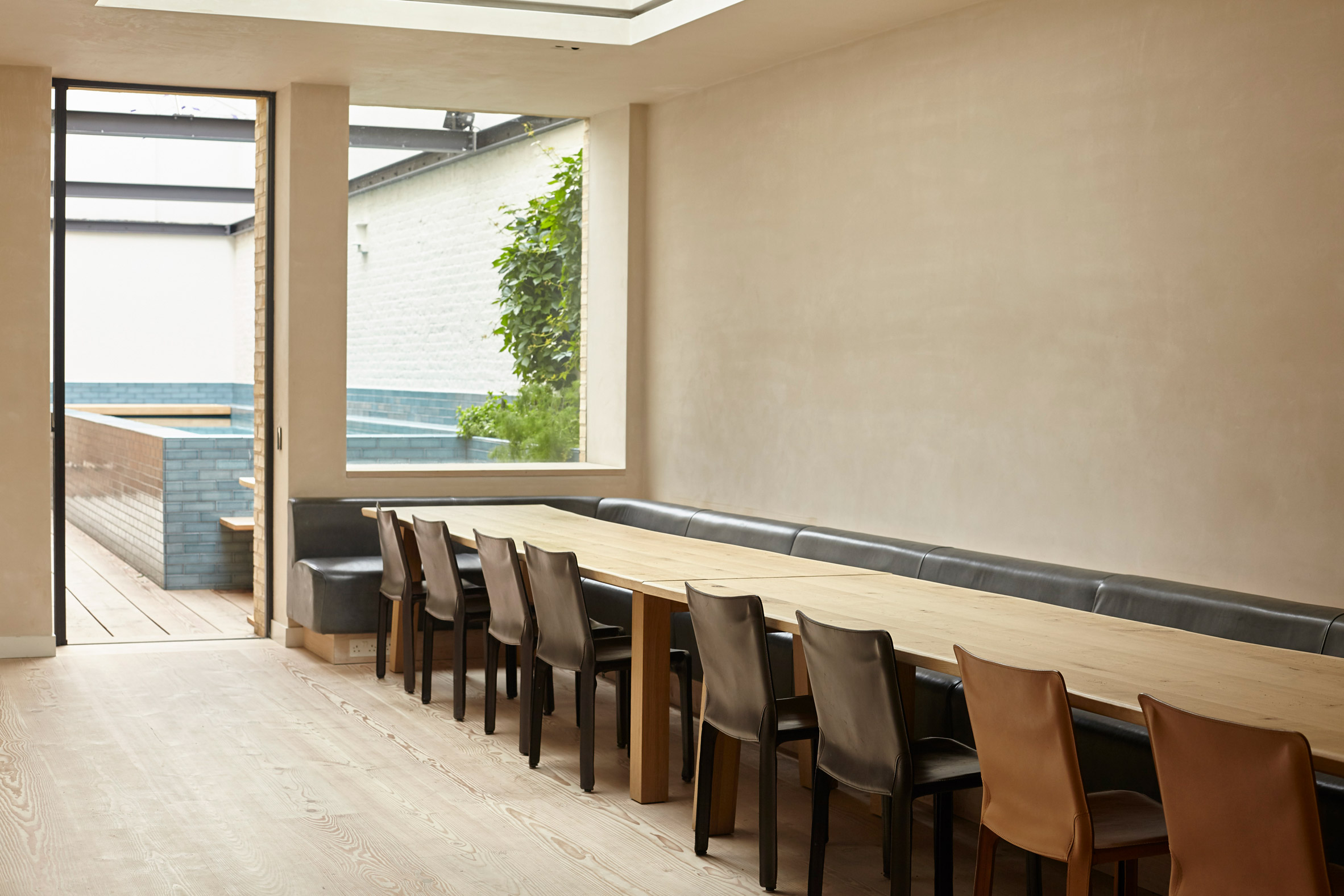 The two rounded volumes, which are topped by green roof terraces, are punctured by a white volume with long glass windows that forms a walkway.

“At first floor, the house splits into two buildings with a connecting bridge that links the collective spaces,” he said. 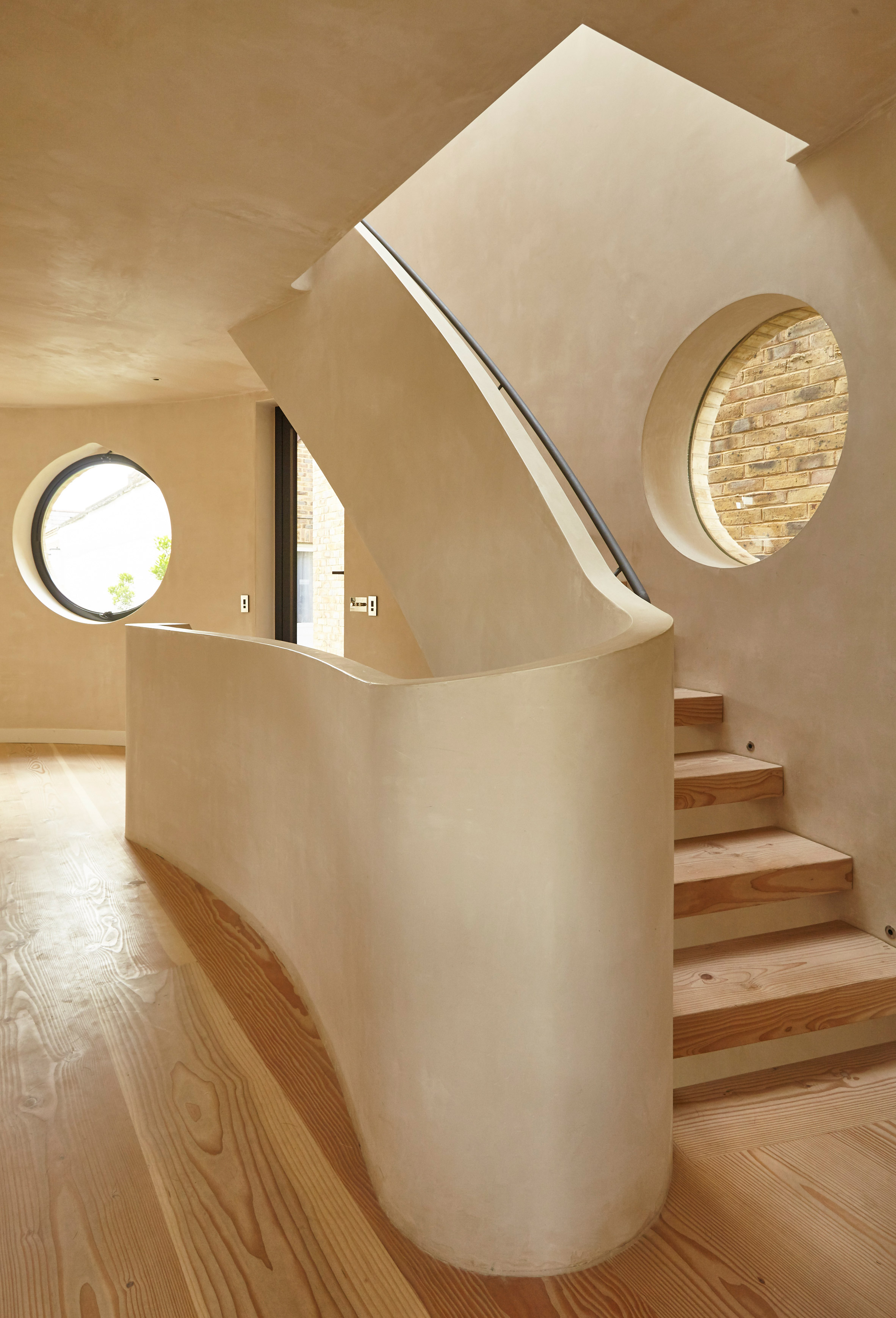 Two square skylights are located on the roof of the ground-floor level below the walkway, offering glimpses into the living area inside.

Also on this outdoor levels, is a swimming pool covered with soft-blue glazed tiles, a deck and shower. Steel beams brace the residence and an existing neighbouring wall above the pool. 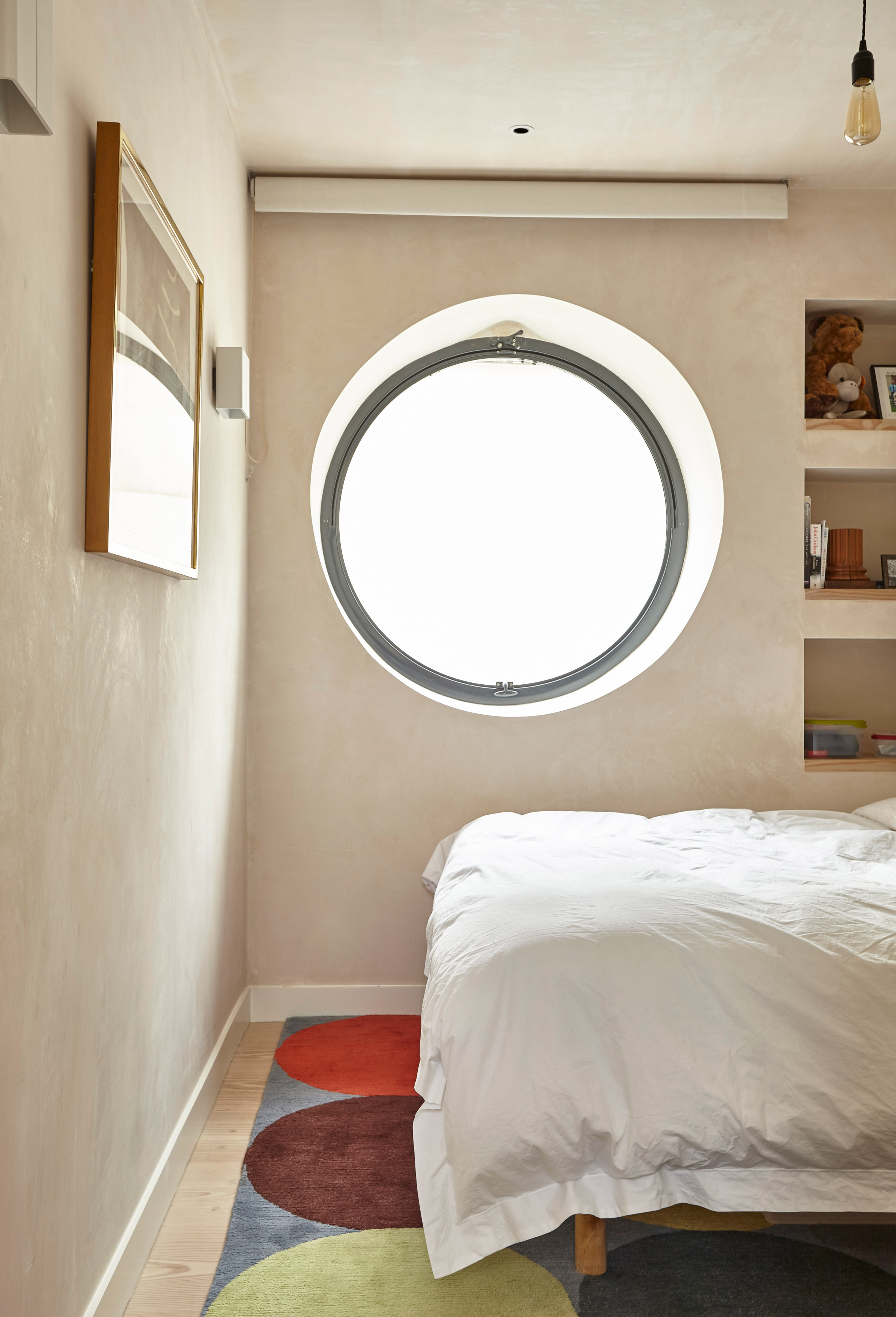 The main living spaces, such as the kitchen, informal dining area and the lounge, are located on the lower floor of the residence, while the rounded structures host the bedrooms and utilities.

Rounded shapes and curved lines feature prominently inside and connect with the home’s wavy exterior, from circle windows to staircases with curved railings. 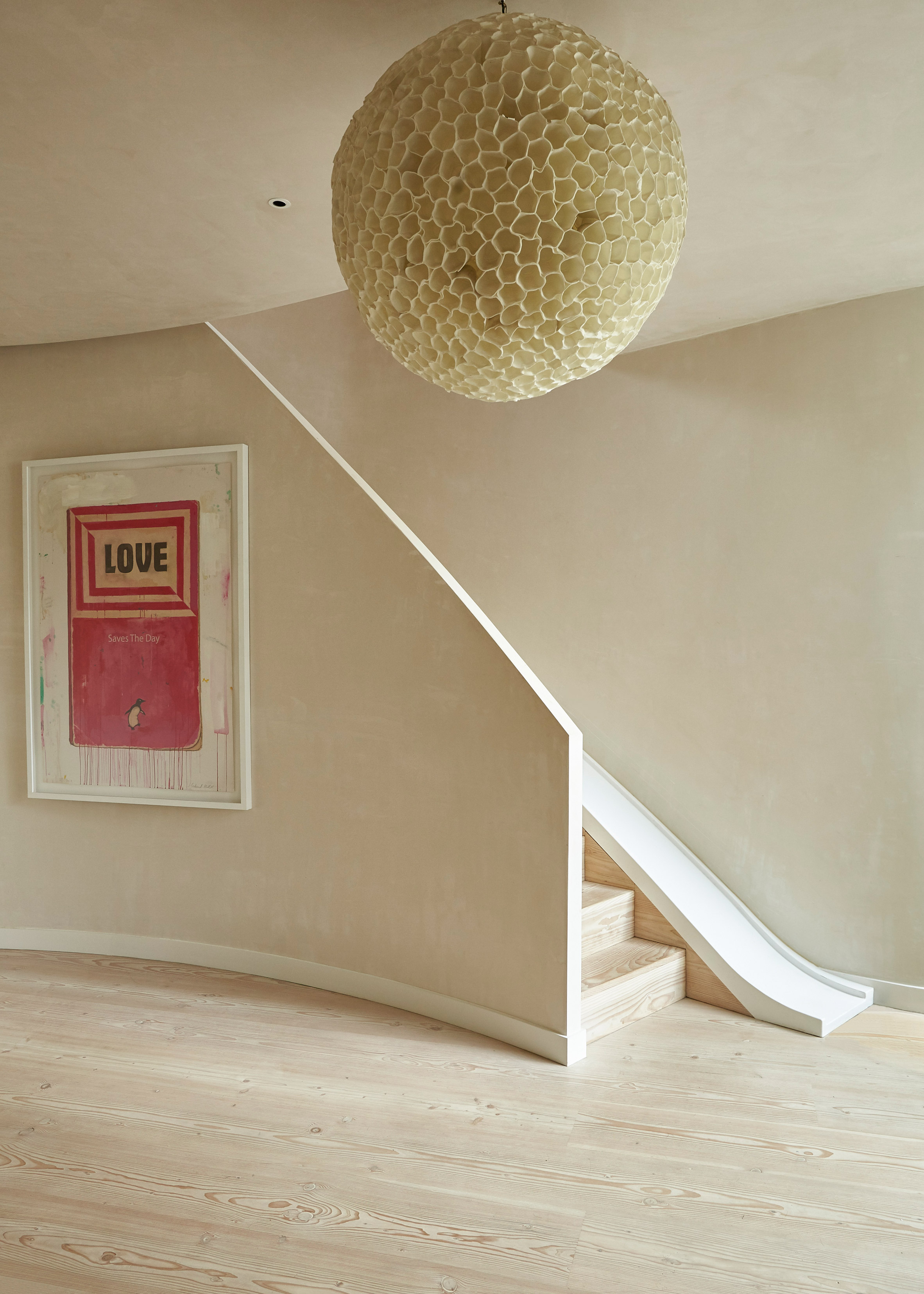 Creamy finishes, like sandy plastered walls and pale wood floors, also form a lot of the decor to continue the creamy brickwork exterior.

The kitchen, which is naturally lit by two lightwells, has two wooden dining tables joined together, and a built-in bench and chairs that can accommodate up to 20 people. 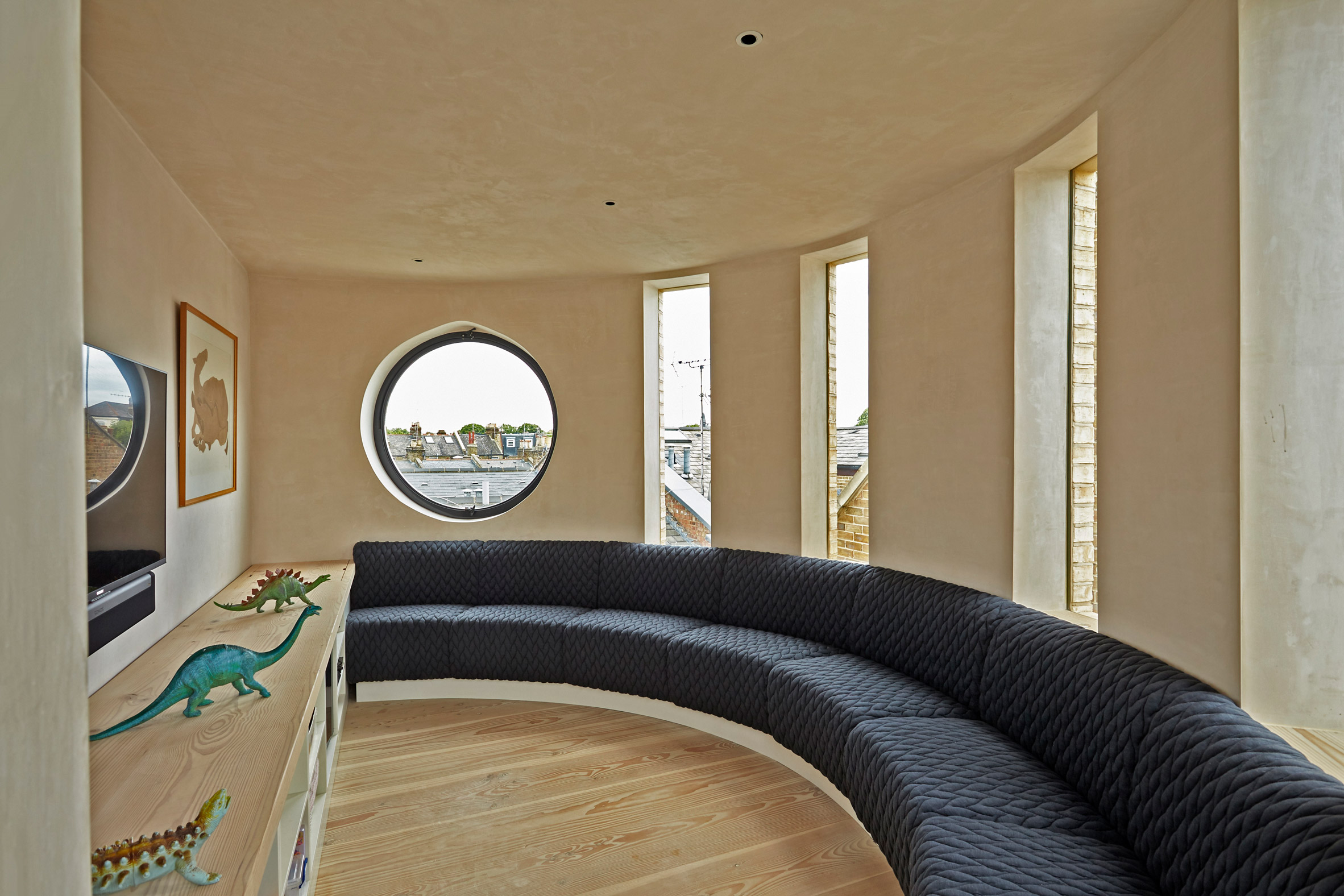 Three bedrooms and a bathroom are located on the first storey in one oval-like portion, while the opposite volume contains a bedroom, bathroom and utility room. 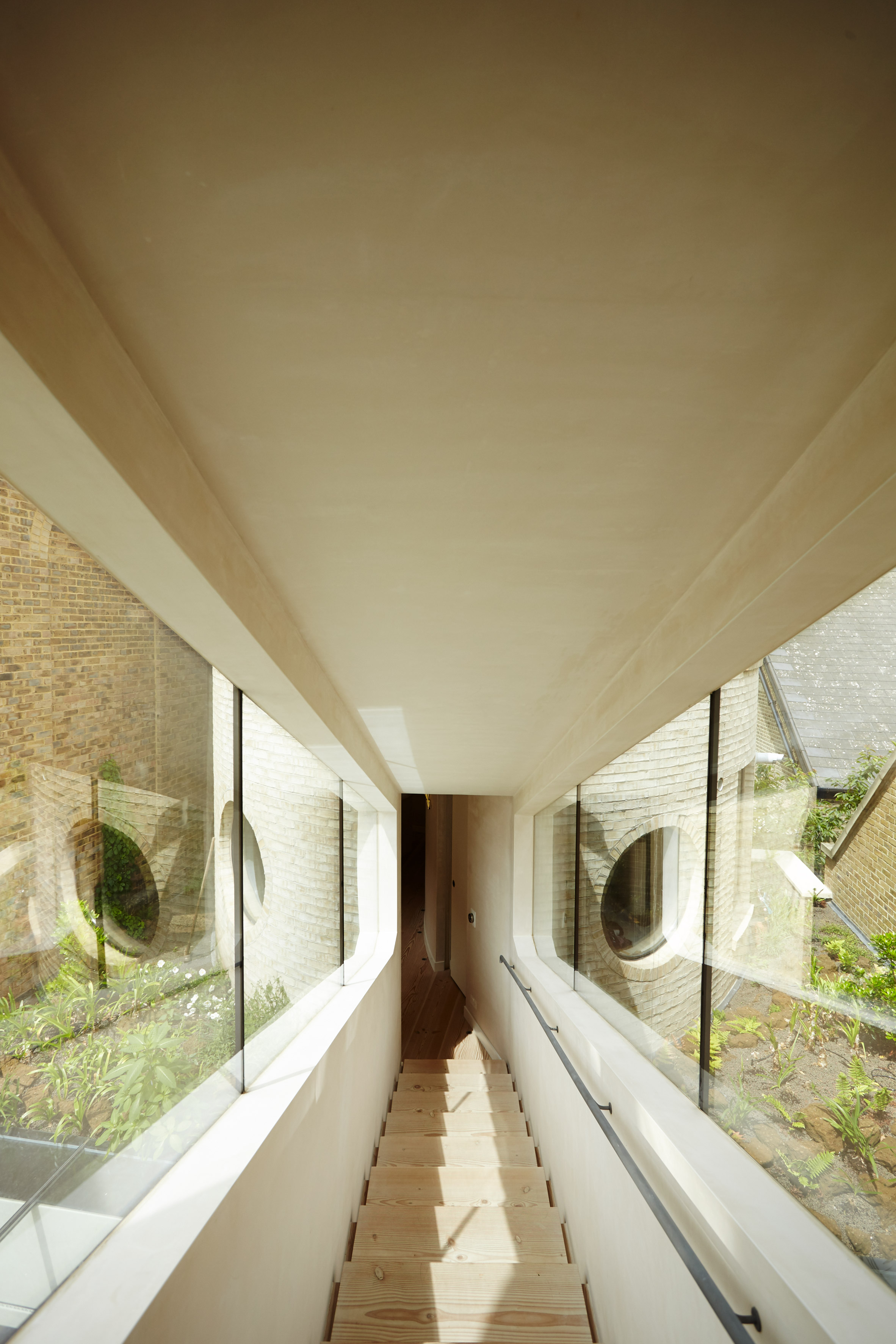 The second floor has a similar layout with two different stairwells.

A playroom and three bedrooms are within the larger oval structure, while a master suite is within the other. 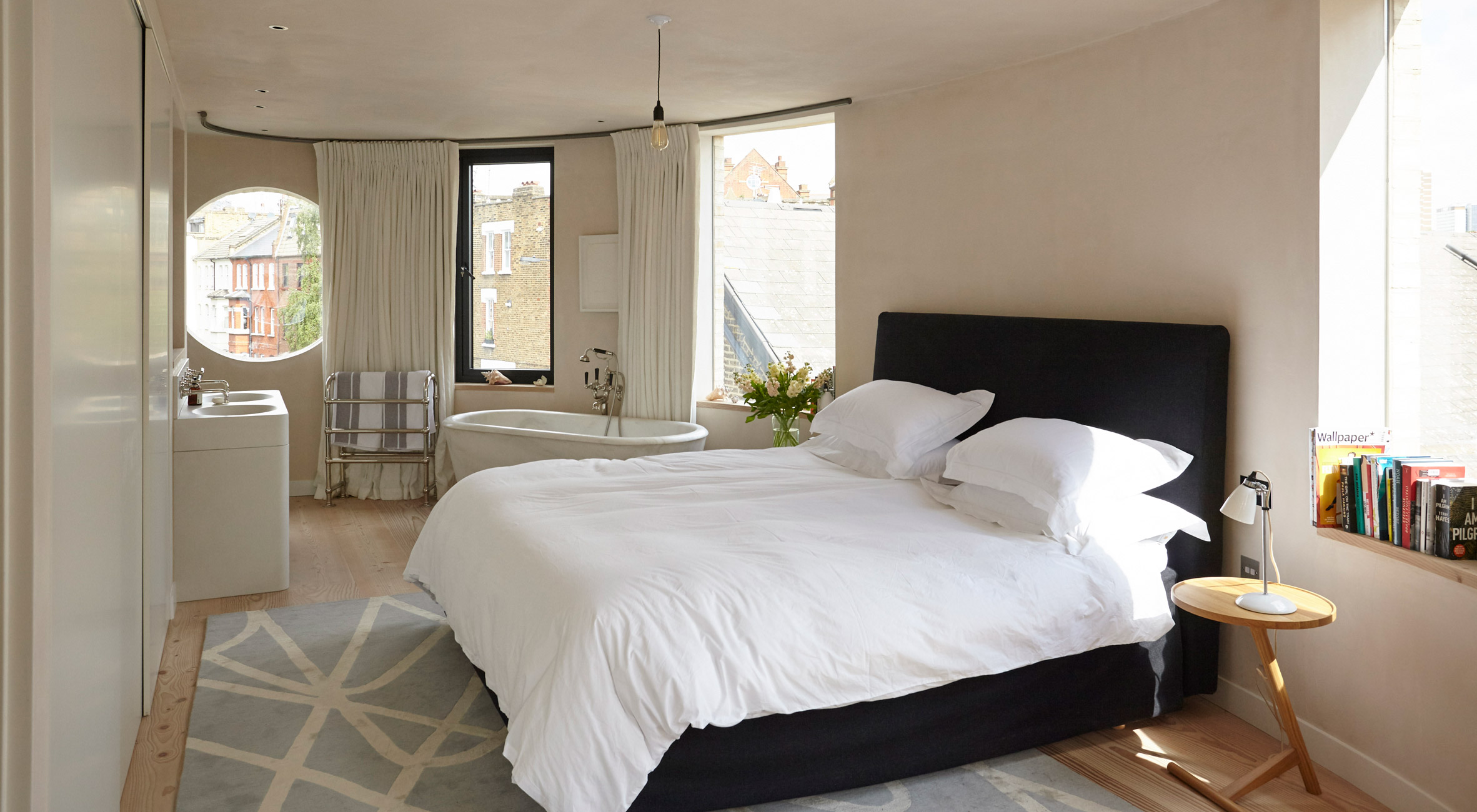 Michaelis has also included a number of playful elements, like a slide alongside a portion of the staircase and a fireman’s pole.

Michaelis Boyd was founded in 1995 and the studio has offices in London and New York City. The studio has designed several Soho Houses around the world, including Soho House Berlin, Soho Farmhouse and Babington House, as well as the Williamsburg hotel in Brooklyn. 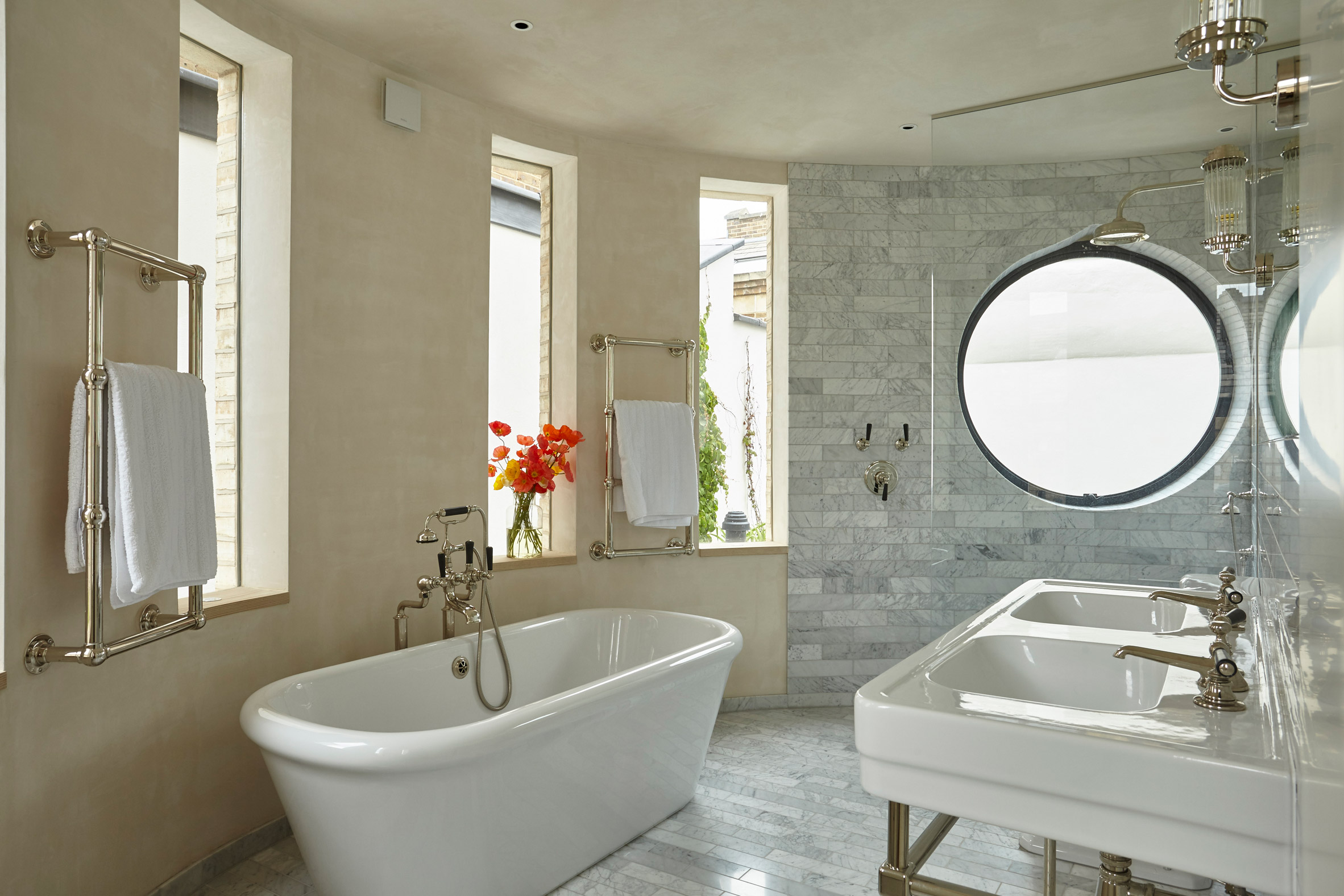 The studio is also behind the interiors for an upcoming residential tower in Downtown Brooklyn designed by Studio Gang.

Other London houses include a Victorian terrace also with creamy brickwork, a Stanton Williams’ Hampstead residence and Hackney House by Applied Studio.

Photography is by Tim Evan-Cook.