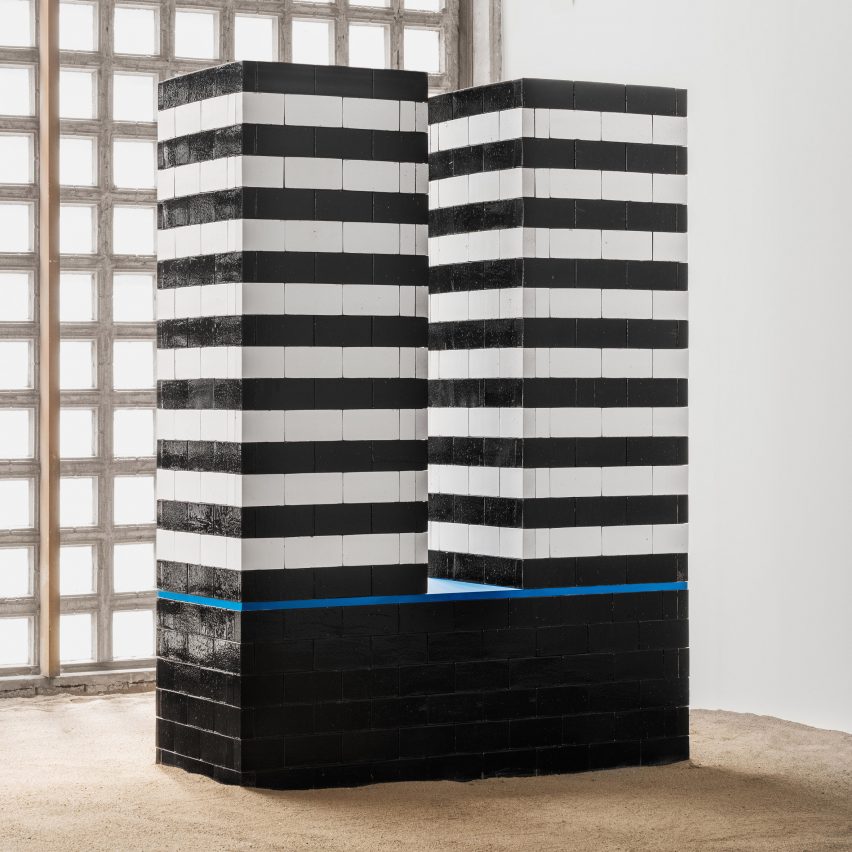 Artist and designer Nathalie Du Pasquier has translated her fascination with bricks into a site-specific exhibition comprising seven totem-like sculptures made from stacked bricks glazed in bright colours.

Du Pasquier created the Bric installation for Italian ceramics brand Mutina, which operates the MUT exhibition space at its headquarters in Fiorano.

The exhibition, which was curated by Sarah Cosulich, features seven sculptural structures that rise from the sand-covered floor of the building designed by Angelo Mangiarotti in the 1970s. 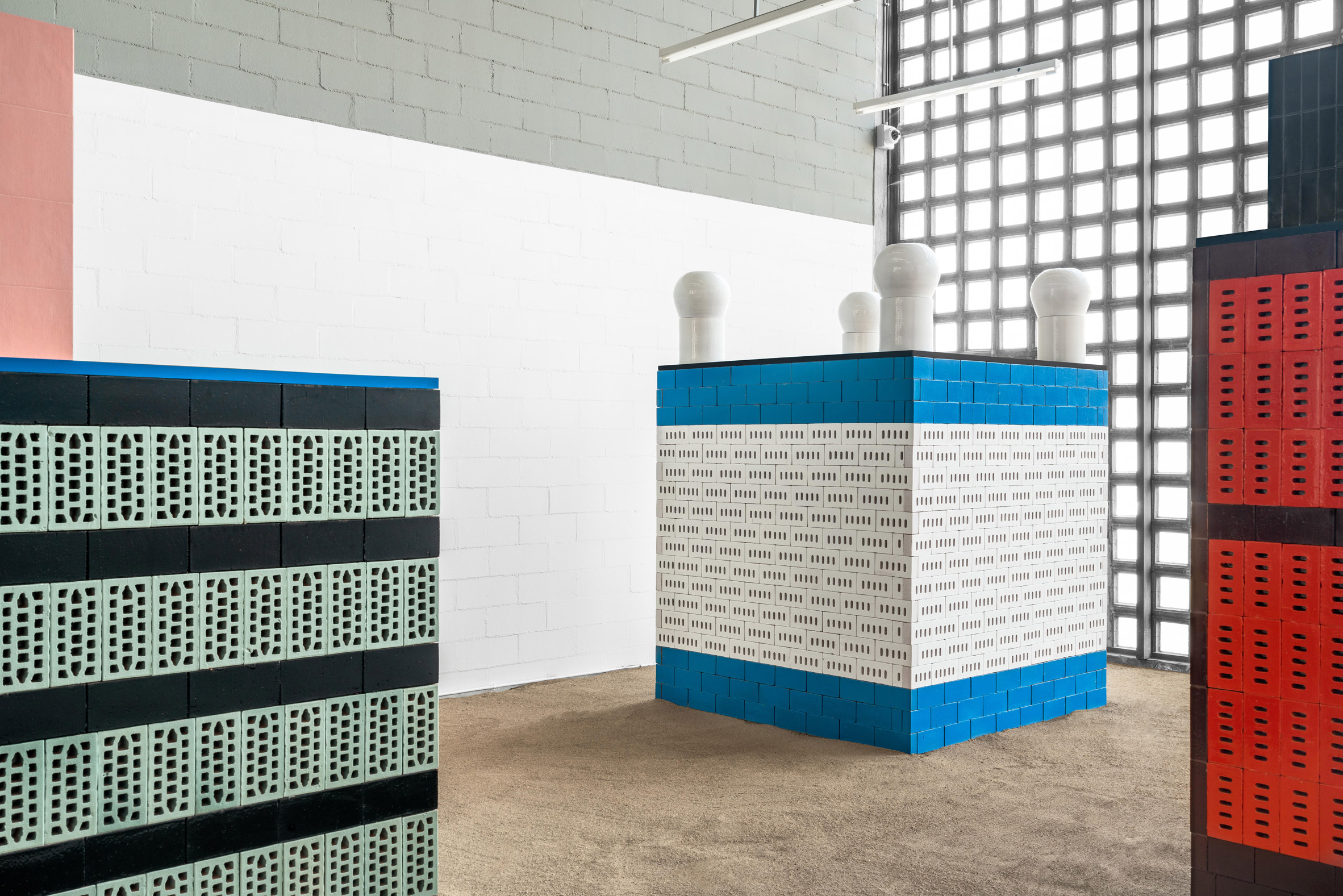 The starting point for each sculpture was the humble brick, which has been a recurring element in Du Pasquier’s work – particularly her paintings.

“I know nothing about bricks,” she said in an interview with Cosulich for the exhibition’s catalogue. “For me they are strange, anonymous objects I have inserted sometimes in the still lifes I paint.” 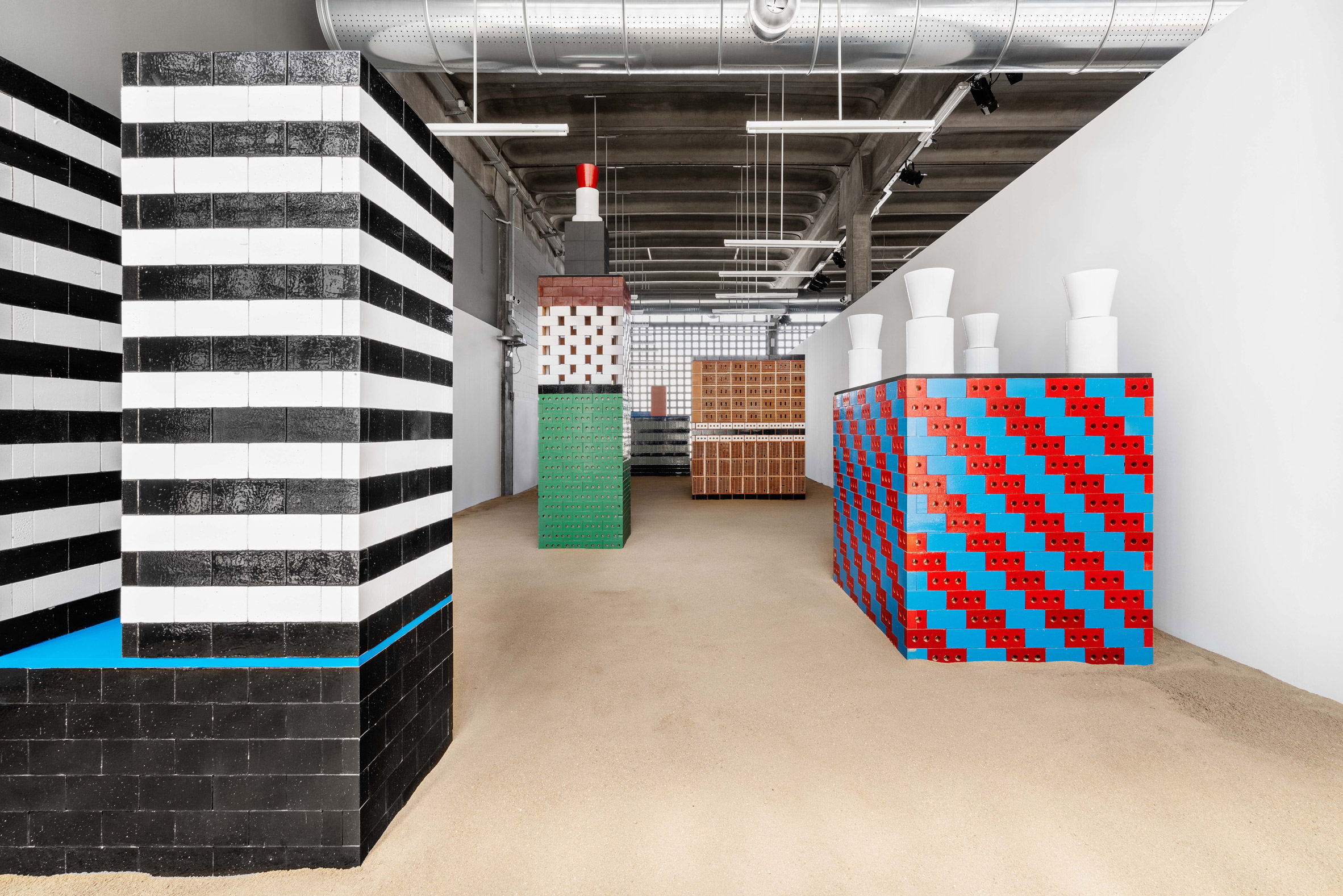 Du Pasquier has focused on painting since the 1980s, with her abstract works often including shapes that reference domestic objects.

Prior to this, the self-taught designer was a founding member of the influential Memphis Group alongside Ettore Sottsass.

She was responsible for many of its decorated surfaces, including textiles, carpets and plastic laminates, as well as creating products and furniture. 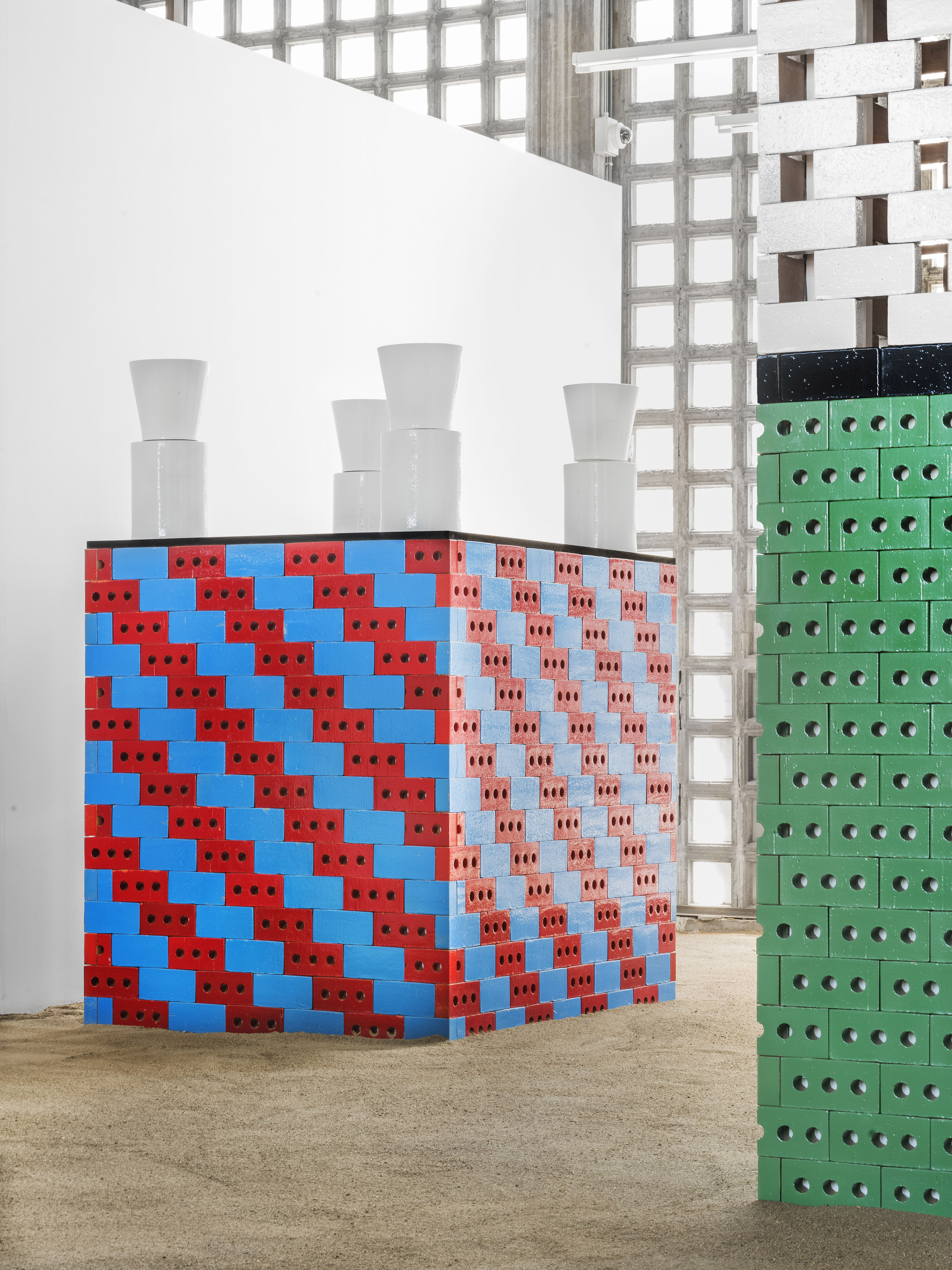 A recent revival of interest in Memphis designs has seen Du Pasquier develop a clothing collection featuring her graphic prints for American Apparel, as well as a range of textile designs with Wrong for Hay. 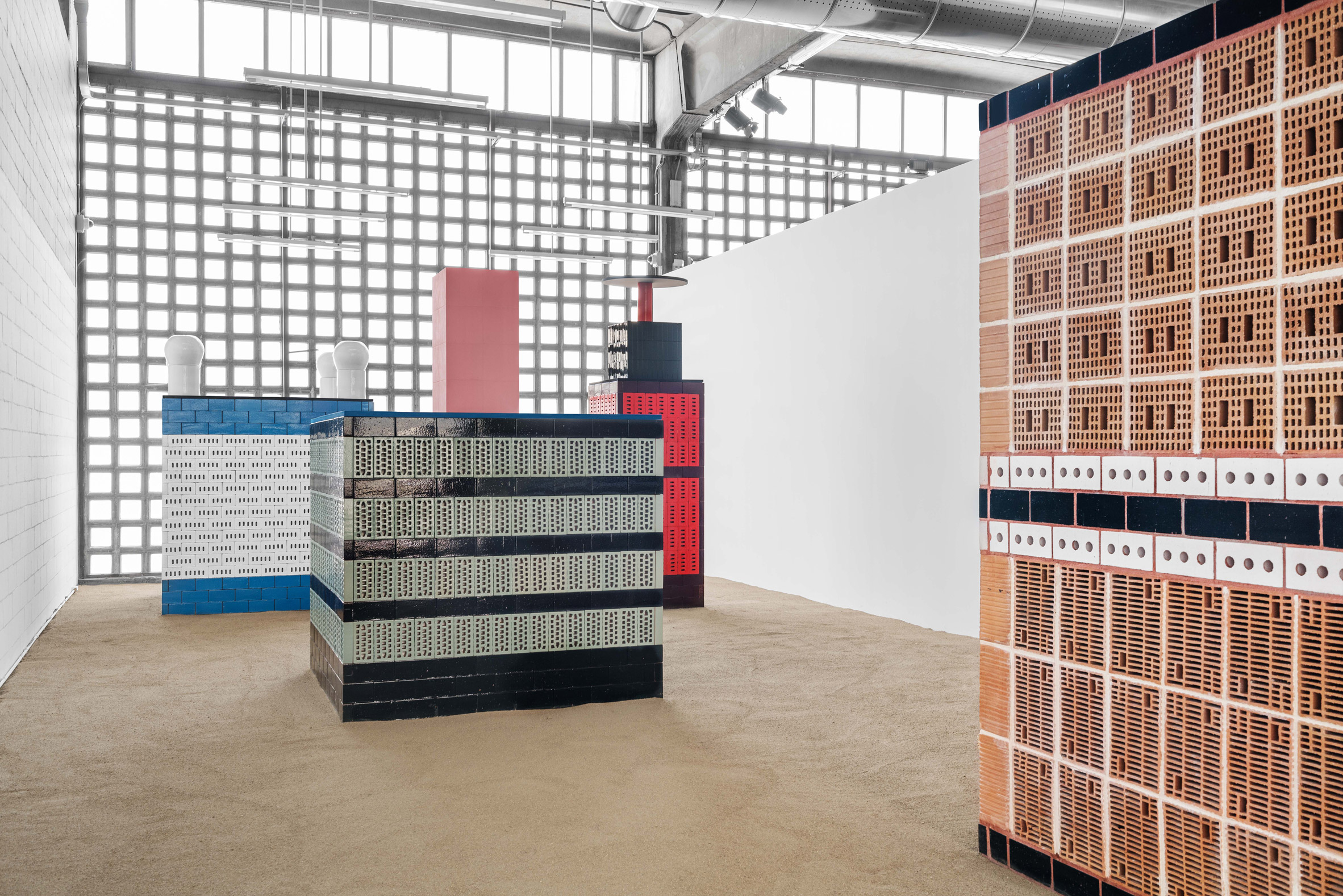 For the BRIC exhibition, Du Pasquier explored the brick as the basic element of architecture and used it to create monumental structures that sit somewhere between art and design.

“I have built different three-dimensional things [in the past],” the designer explained.

“The new aspect of this experience is the almost architectural scale, and the fact that the bricks, being modular, almost lose their three-dimensional quality, and go back to being parts that form a surface.” 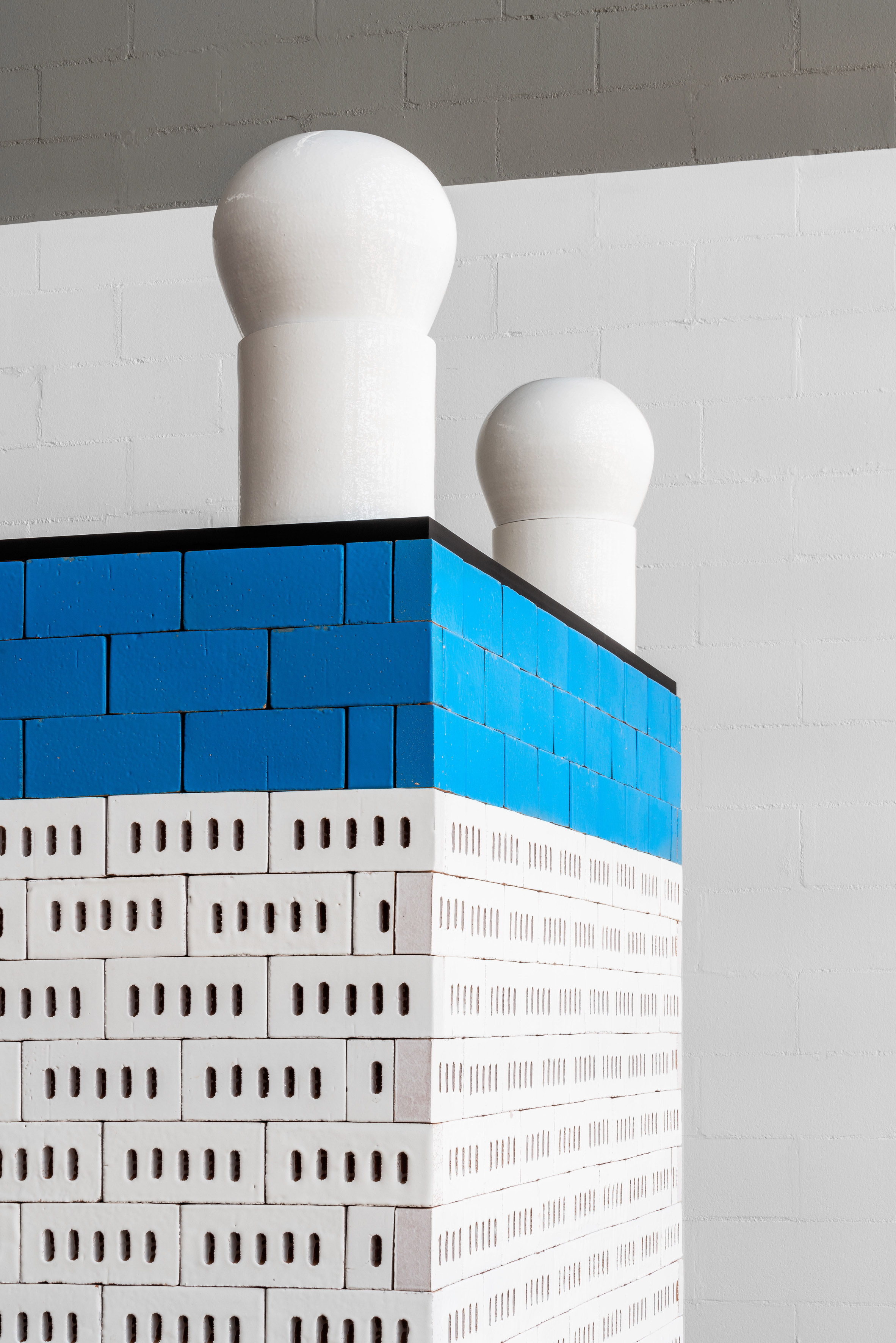 Different types of brick are glazed in bright colours and layered to produce geometric shapes that are reminiscent of Du Pasquier’s paintings, as well as some of the Memphis Group’s sculptural furniture.

In several of the sculptures, the bricks are turned to display their inner structure. In this way their structural value is compromised but they take on a more decorative quality as patterned units. “Bric is almost design or almost architecture, though it has no useful purpose,” the designer added. “It has nothing to do with a painting, which I can alter down to the very last second.”

“Bric is a collaboration with the Mutina team, the excellent engineers and masons without whom these small constructions would have remained merely ideas. I had an idea and other people made it. A painting is not an idea.” 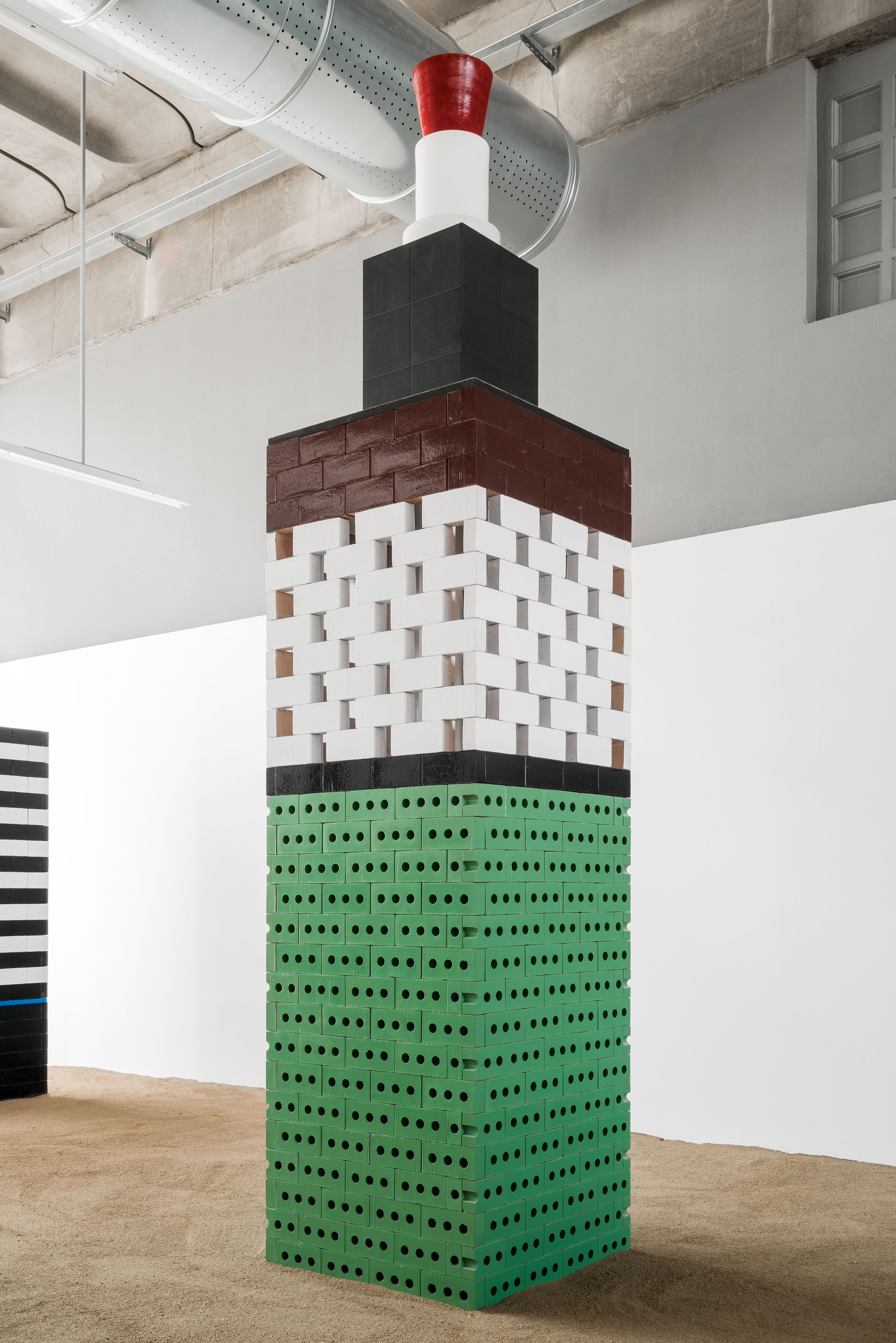 The exhibition was produced by Mutina as part of its Mutina for Art project. The theme connects with the company’s heritage as it explores the idea of the brick as a product that is made from the earth in a similar way to traditional ceramics.

Mutina’s main focus is on developing innovative ceramics products in collaboration with some of the world’s leading designers.

Its previous projects include textured tiles by Ronan and Erwan Bouroullec that can be combined to create different patterns, and a collection by Konstantin Grcic featuring contrasting matte and gloss surfaces.