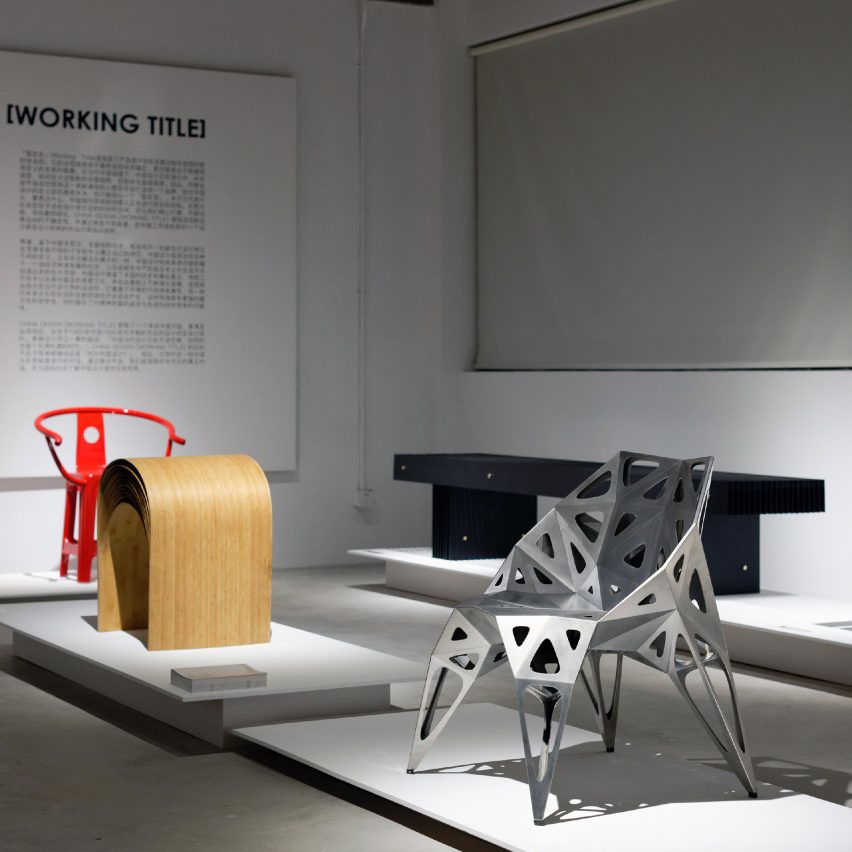 Furniture by designers including Joyce Wang and Mario Tsai is on show at this Shanghai exhibition organised by contemporary art and design platform The Artling.

The private exhibition space occupies a unit within a building that was designed by and is also home to Lyndon Neri and Rossana Hu’s architecture and interiors studio Neri&Hu.

The Artling, which provides a service sourcing artworks for galleries and private clients, said it wanted to offer “a different perspective” to the events taking place around the city, including the Art021 Shanghai Contemporary Art Fair and West Bund Art & Design fair.

The company added that the exhibition “aims to highlight the breadth and depth of creative talents that exist in China, with a focus on collectible, limited edition chairs”.

Choy selected chairs created by a group of designers born in the 1980s or later to represent the boom in creativity that is currently occurring in China. According to the curator, young designers are leading a revolution in how China is perceived on the global design stage.

“While the world is searching for a definition of contemporary Chinese design, the reality is that there are likely to be several,” said Choy, “and they will be found in the hands of the young and aspirational generation currently establishing themselves across the vast nation.”

Earlier this year, Rossana Hu told Dezeen about what she described as “a new generation of creatives who are doing amazing work exploring issues, exploring materials and working with technology”.

Designers and architects from China also played a central role at several major design events in 2019, with China being named as guest of honour at Design Biennale Saint-Étienne and six young Chinese designers being highlighted as rising talents at the Maison&Objet design fair.

The designers who contributed seats to the exhibition include Joyce Wang, who has a studio in Hong Kong and in London. Wang previously created a range of terrazzo products aimed at highlighting the material’s precious qualities.

Designer Mario Tsai, whose work also features in the show, presented a modular lighting collection and a group of tables with bases made from flexible steel-sheets at Milan Design Week 2019.

A bench made from iridescent stainless steel by Guangzhou design studio Buzao is also on display, alongside a piece by Zhang Zhoujie, who has previously used computer algorithms to generate a series of distorted mirrors.

“From the work of these selected designers, we can begin to understand the true essence of the culture and gain new perspectives for the global community,” Choy added.

“The modern Chinese collectible will include not only craftsmanship and innovation but also the intangible vision that will be of even bigger value in the years to come.”

The exhibition’s launch was attended by figures from the Chinese design scene, including curatorial director of Design Miami, Aric Chen, and designer Alan Chan.

Photography is by Mario Tsai unless stated otherwise.