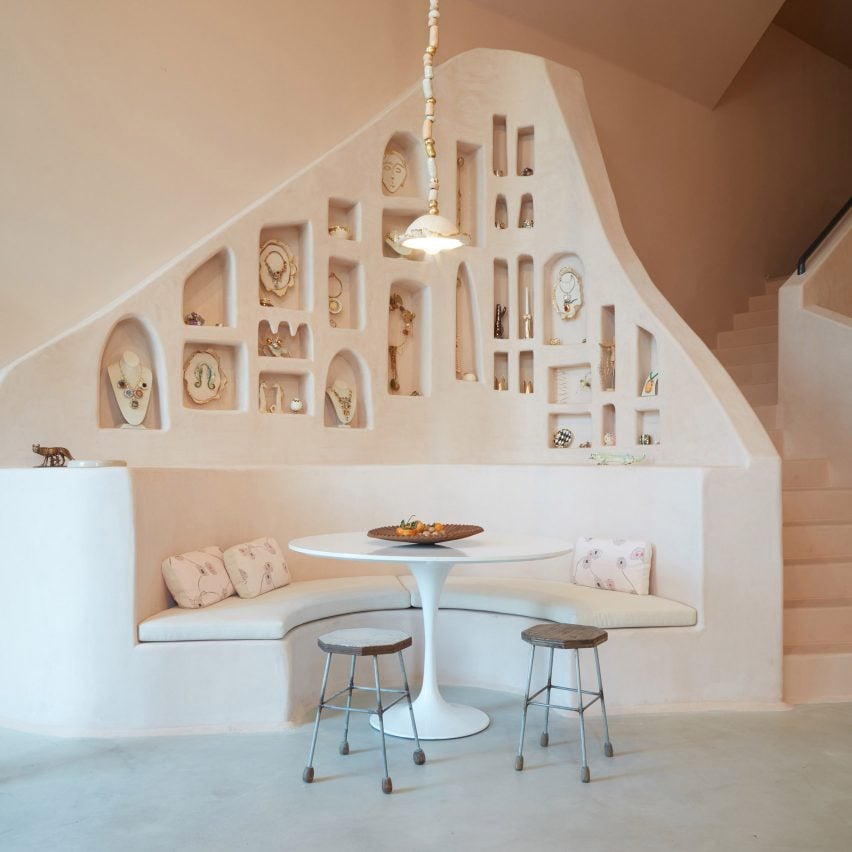 Los Angeles jewellery designer Sonia Boyajian has hung oversized replicas of her creations as light fixtures in the pink-toned flagship store she designed in collaboration with Studio Shamshiri. 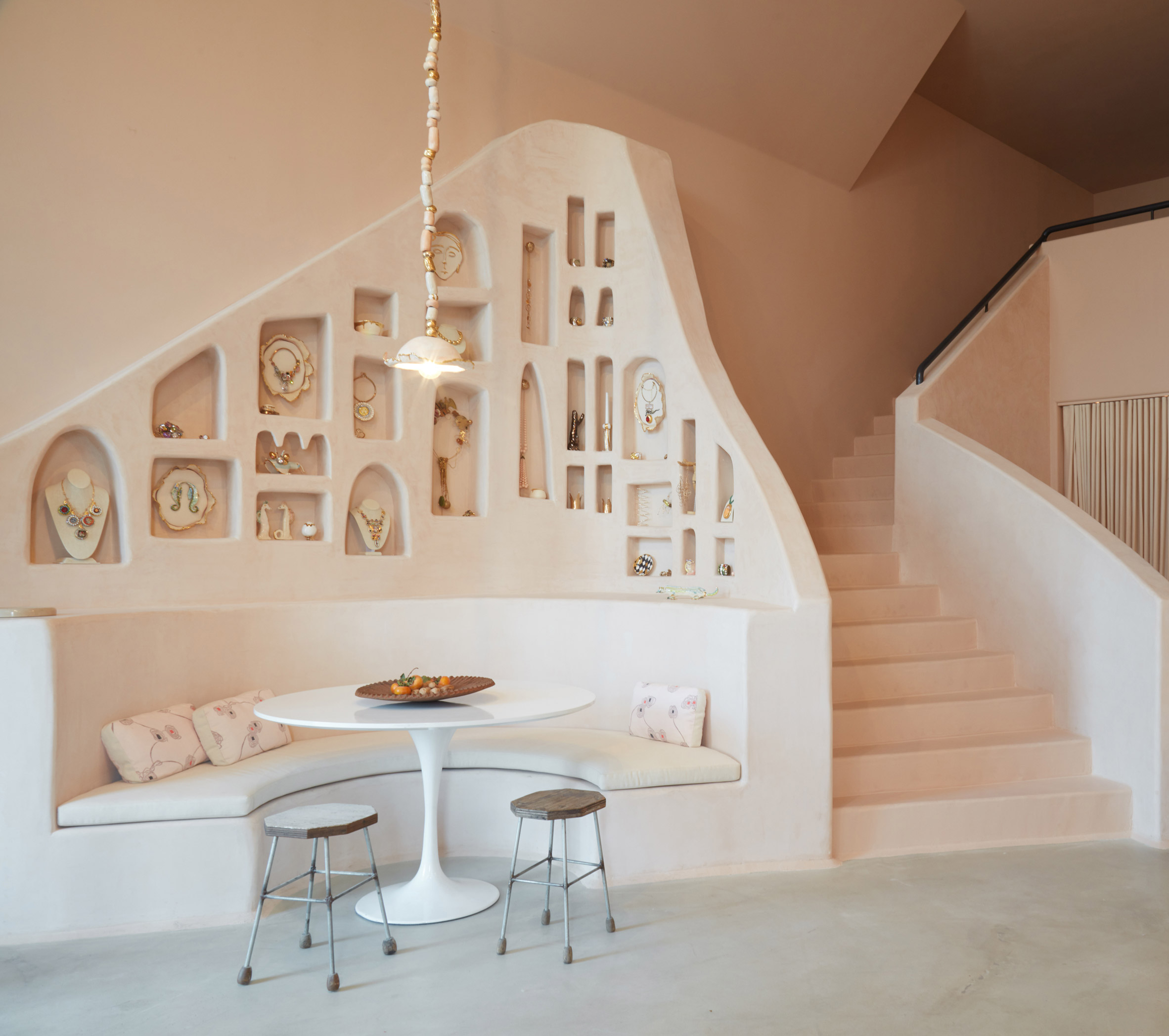 Boyajian wanted a space that allowed her to host events, but also a place that felt like home. They added “residential touches” such as an entertainment area and eat-in kitchen to the interior, while also leaving room for work-centred spaces, including a studio, office and showroom. 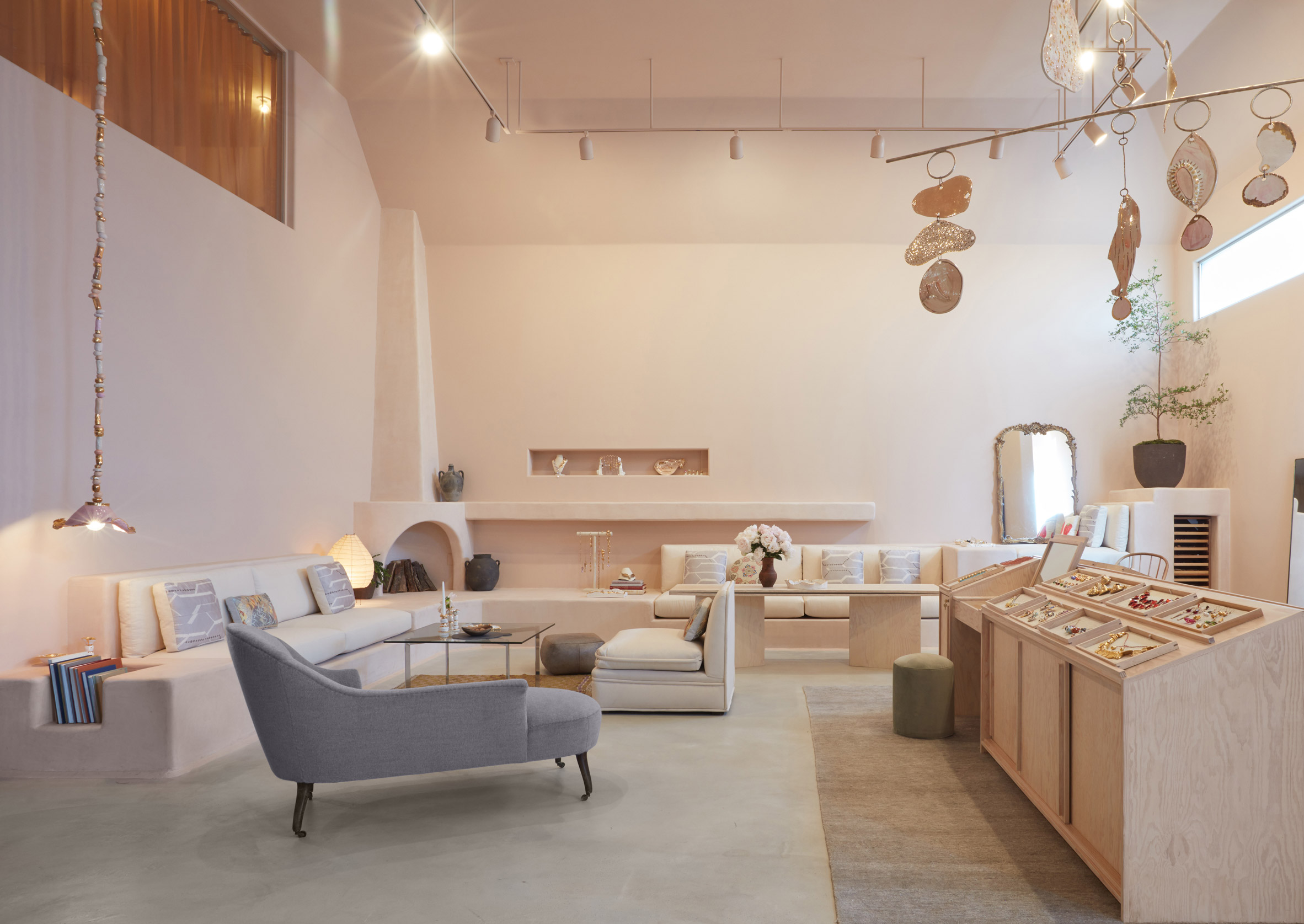 “This building is her working studio, office, and showroom – it was important for the space to feel like home and where she able to prepare food, given how much time she spends there and how much she likes to host,” the designers told Dezeen.

Shamshiri and Boyajian took cues from famous designers and architects to create many of the interior’s architectural features and furnishings. 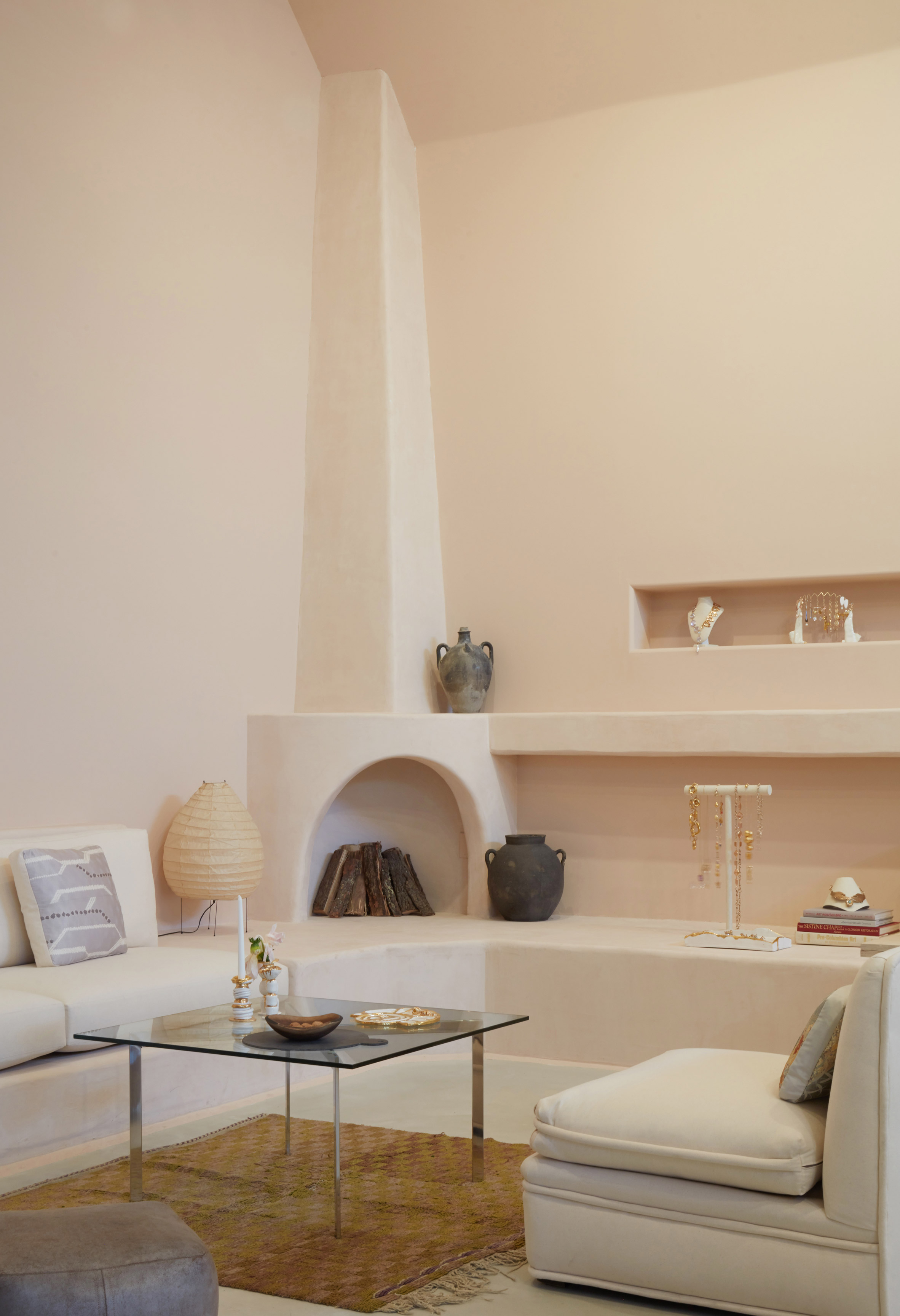 The plywood display cases topped with rectangular compartments for exhibiting jewellery were influenced by pieces from late American artist Donald Judd, while the colour and form of the pink portola plaster seating around the showroom was modelled after the benches artist Georgia O’ Keefe used inside her Abiquiu House in New Mexico.

A spiral staircase by architect Robert Mallet-Stevens provided a basis for the curving series of steps the designers added to the interior. And the palette was taken from work by 20th-century architect Le Corbusier.

“Pulling inspiration from Georgia O’ Keefe, Robert Mallet-Stevens, Corbusier, and Donald Judd, the space features custom display niches that are as whimsical as the pieces they hold,” the designers added.

Necklaces, earrings and ceramic pieces also display inside small niches that were cut into sculpturally built shelving featured throughout the space. Other pink-rendered details inside include seating and a chimney. 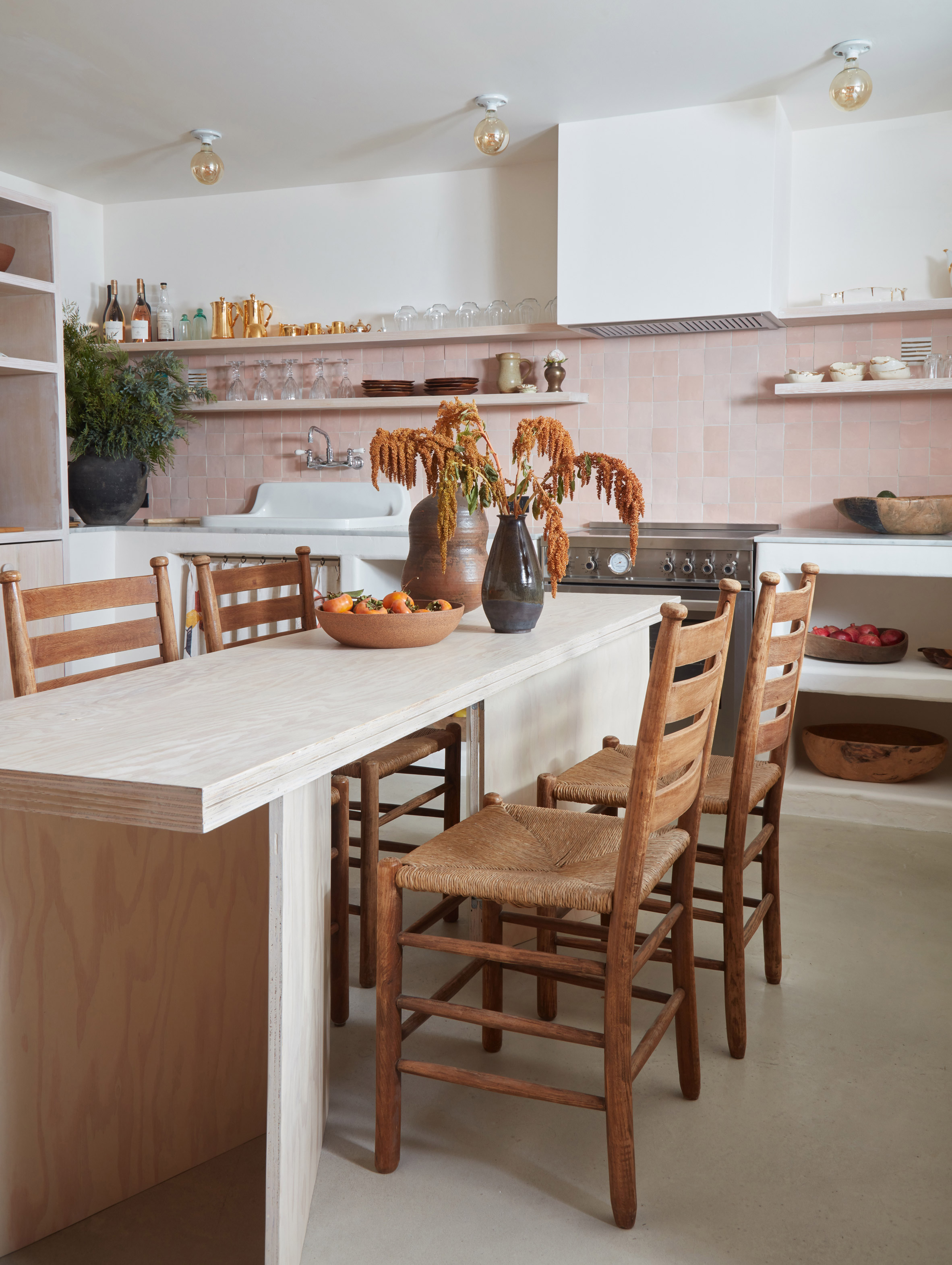 Upscaled versions of Boyajian’s work hang from the ceiling and walls in the form of functioning light fixtures.

“The jewellery is not only on display, but is a part of the space itself: the ceramic sconces, pendants, and mobiles are larger-than-life versions of Sonia Boyajian’s earrings,” the women described. 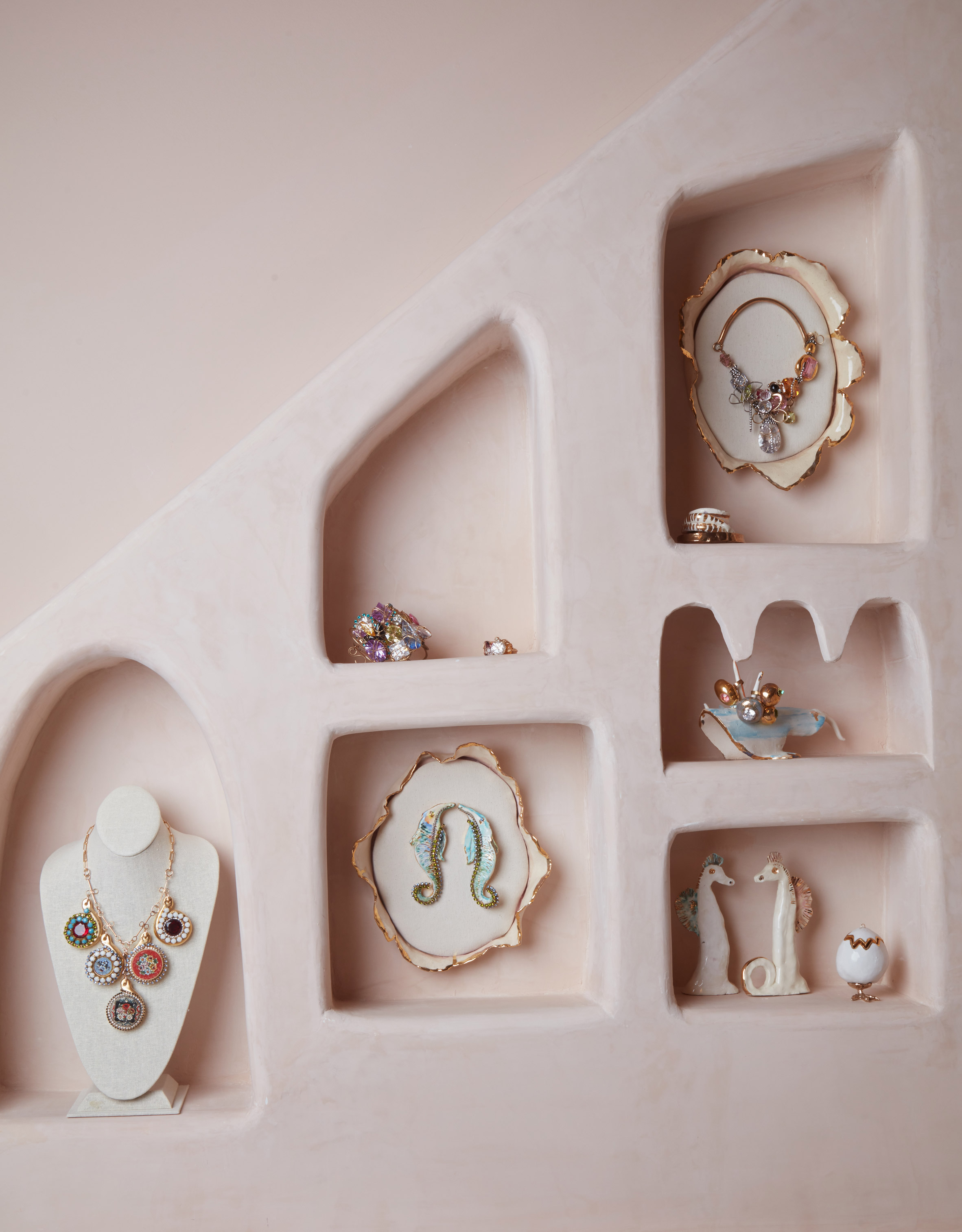 Away from the showroom, Boyajian’s kitchen features a pink backsplash, white cabinetry and stainless steel appliances. A whitewashed plywood dining table, similar to the coffee table used in the retail space, was also custom made by Studio Shamshiri.

The Los Angeles designer founded her jewellery and accessories line in 2003, her unique designs are influenced by objects she collects on her trips around the world. 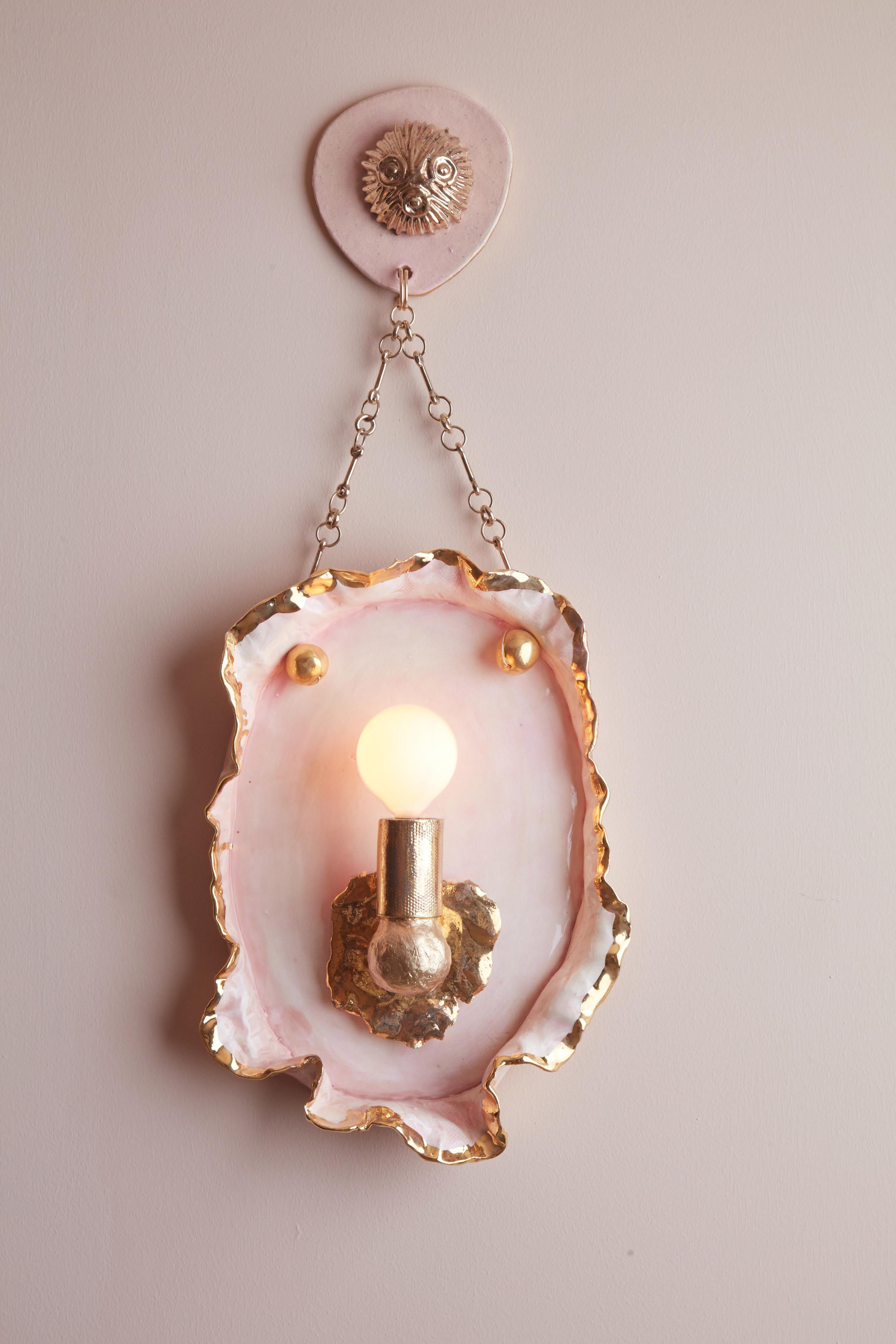 Sibling duo, Pamela and Ramin Shamshiri founded Studio Shamshiri in 2016. Its other projects include the renovation of a New Orleans hotel designed to be the home of a worldly woman and her collection of souvenirs.

Photography is by Stephen Busken.