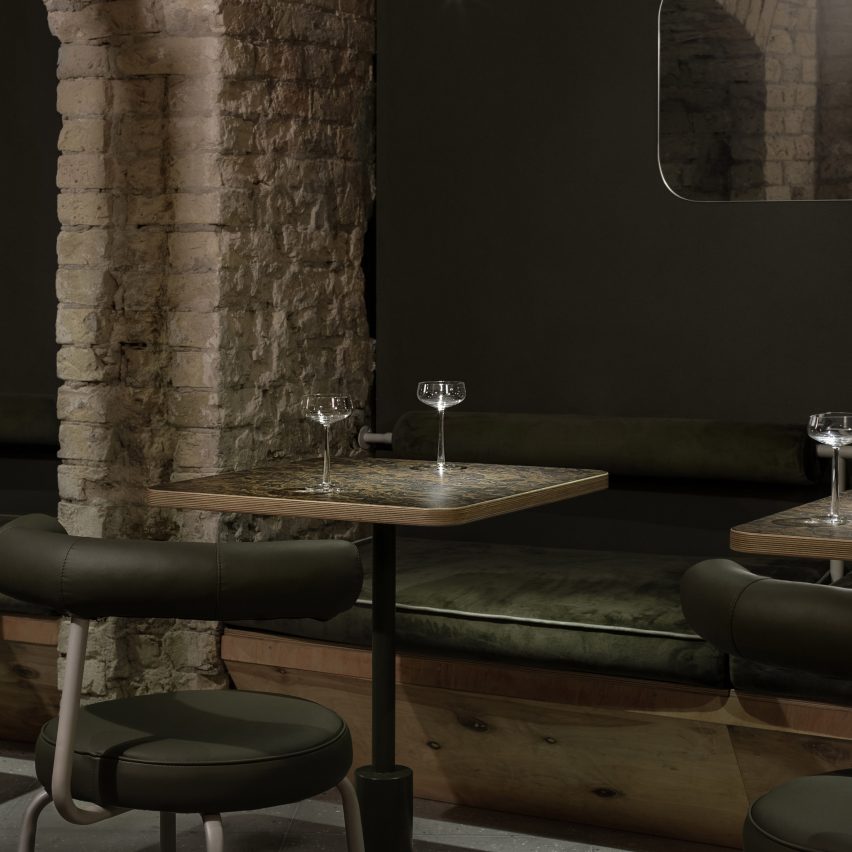 Rina Lovko Studio has combined bottle-green surfaces with low lighting to create the moody interior of this drinks bar at the heart of Kiev‘s city centre.

Balthazar is set beneath the bustling aisles of Besarabsky Market – a historic indoor marketplace in central Kiev that sells a variety of fresh produce to locals.

Locally based Rina Lovko Studio was asked to develop the interiors of the basement-level bar, but was given a largely open brief. 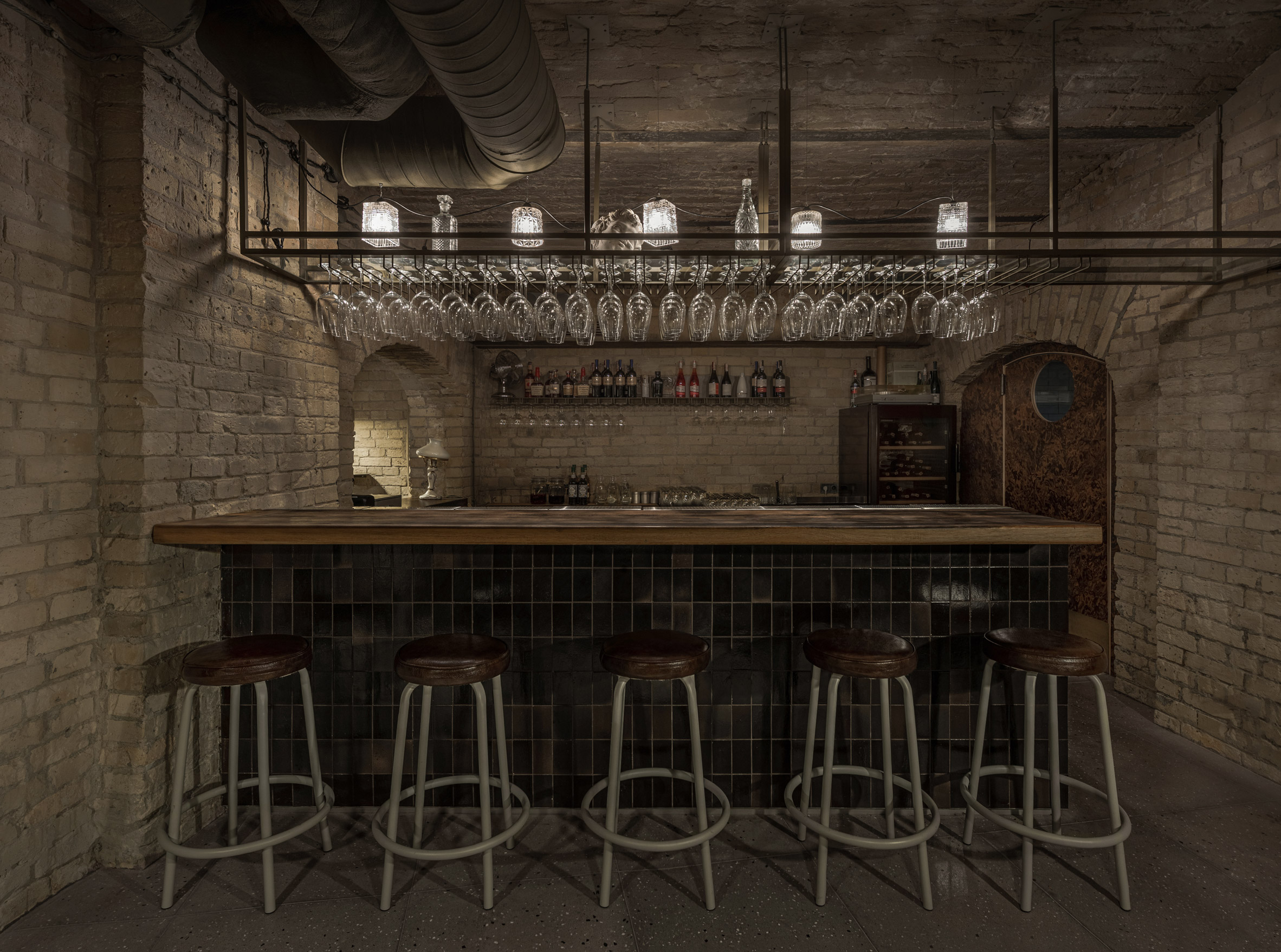 “The project was done mostly intuitively,” the studio’s eponymous founder told Dezeen. “I really wanted to create a place that would not resemble any other and thus make it unique.”

“We easily found a mutual language with the art director of Balthazar and reached an understanding of the audience,” she continued.

“This made it possible to quickly outline the concept and to understand what kind of institution it would be.” 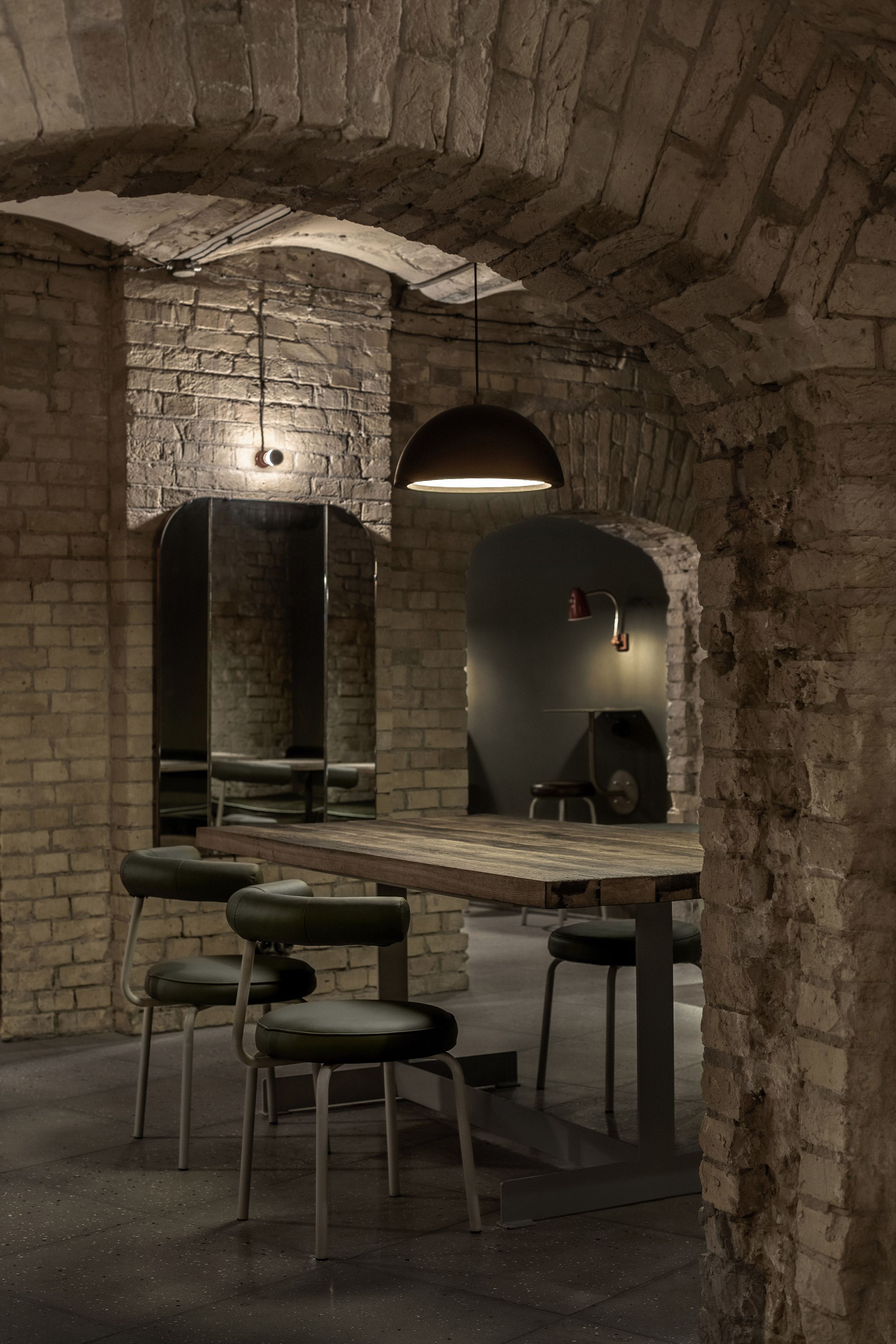 Before making any aesthetic changes, the studio first had to tackle a number of structural issues.

The bar takes over a winding cellar that’s interrupted by a series of brick archways, some of which only measured 1.6 metres in height.

Over several months the studio dug below ground level to lower the floor of the bar – the arches are now 1.8 metres high, allowing guests to wander throughout the venue without risk of bumping their heads. 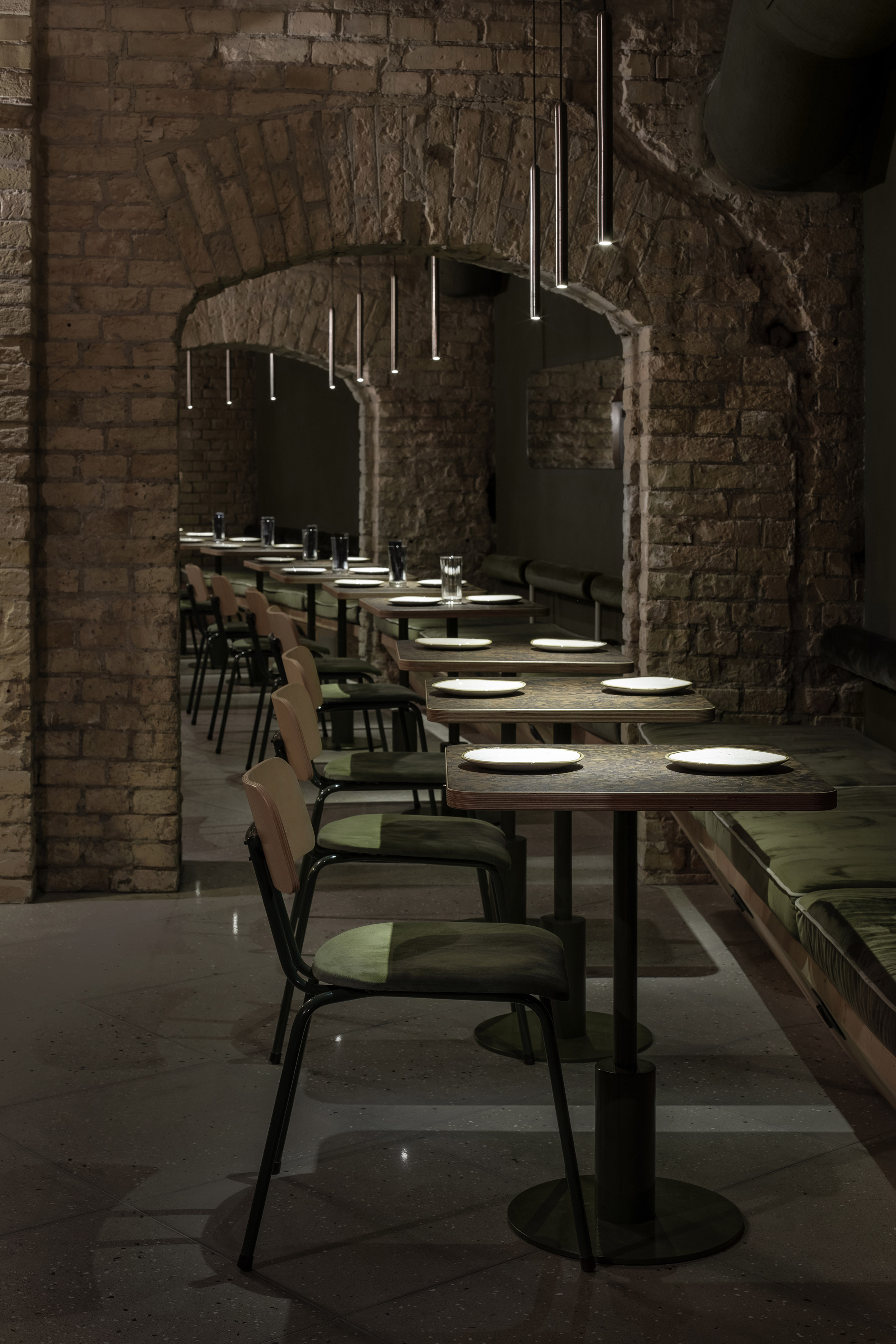 The narrow nature of the cellar also meant it would be difficult for guests in the back rooms to receive a supply of fresh air.

A network of pipes has thus been installed directly underneath the ceiling, running from the rear of the bar to its entrance where a ventilation system is able to release air and take more in from the outdoors. 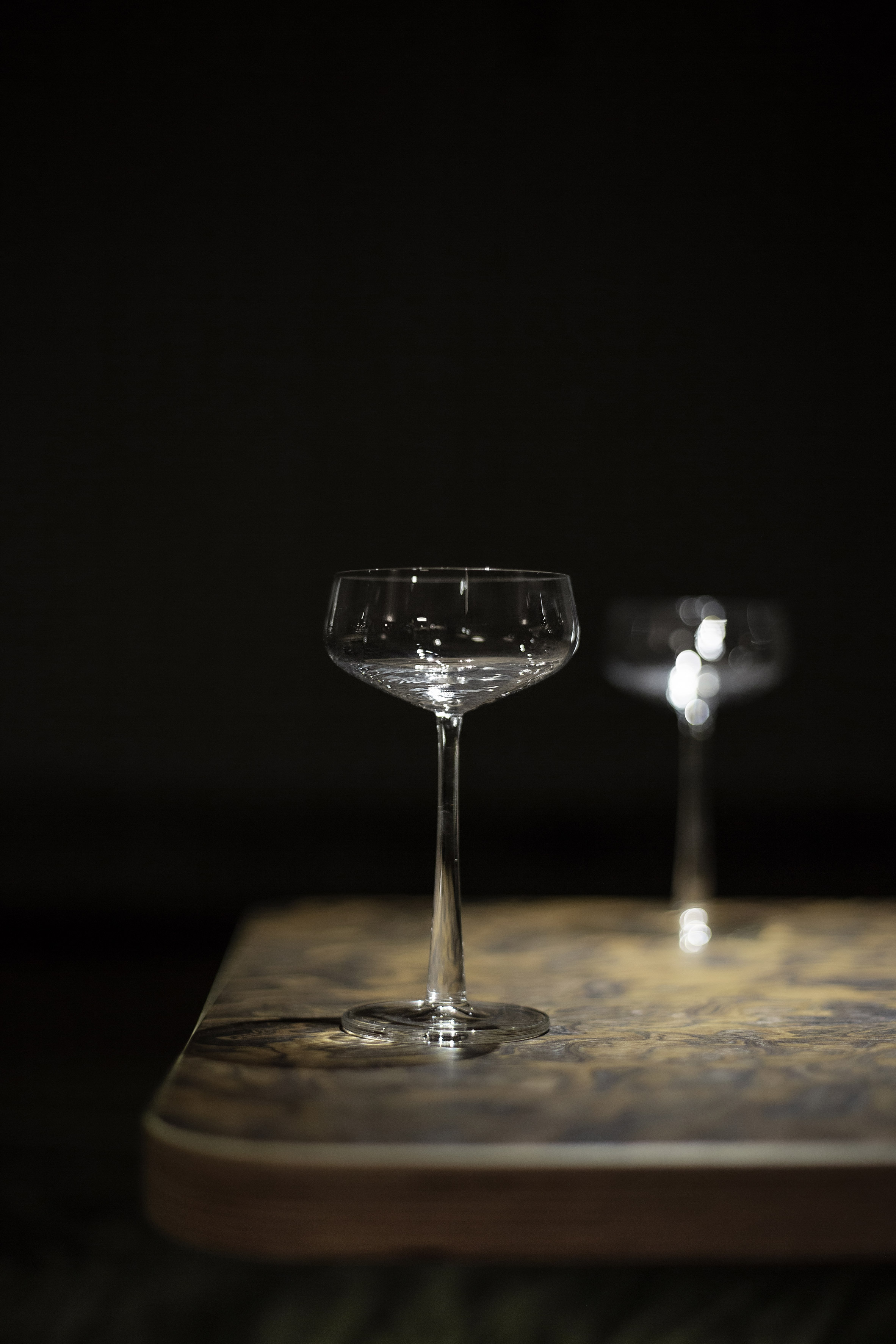 The studio has left all of the bar’s brick walls exposed. Remaining surfaces have been painted a deep shade of green, in a visual nod to the various wine bottles that will be on offer.

Glazed tiles in the same green hue have then been used to clad the base of the main drinks counter, while its surfacetop is crafted from old wine barrels. 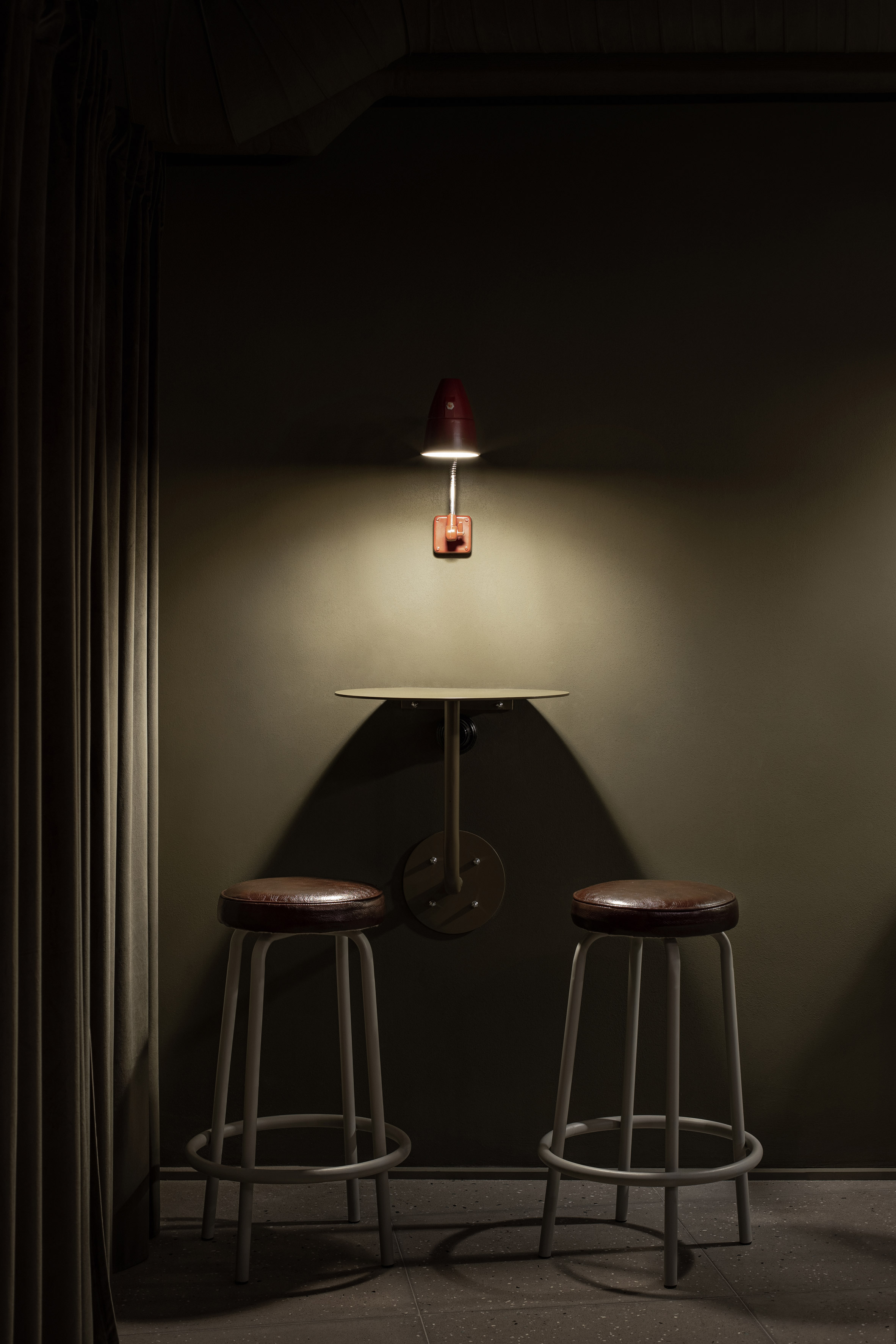 Should guests want to grab a light snack, they can sit along an olive-coloured seating banquette that runs the length of the cellar wall.

Here there is a sequence of dining tables made from a veiny style of veneer wood.

There are also several high counters paired with brown-leather stools, and a cosy lounge-style area dressed with a sofa, brown armchairs and heavy wall tapestry. 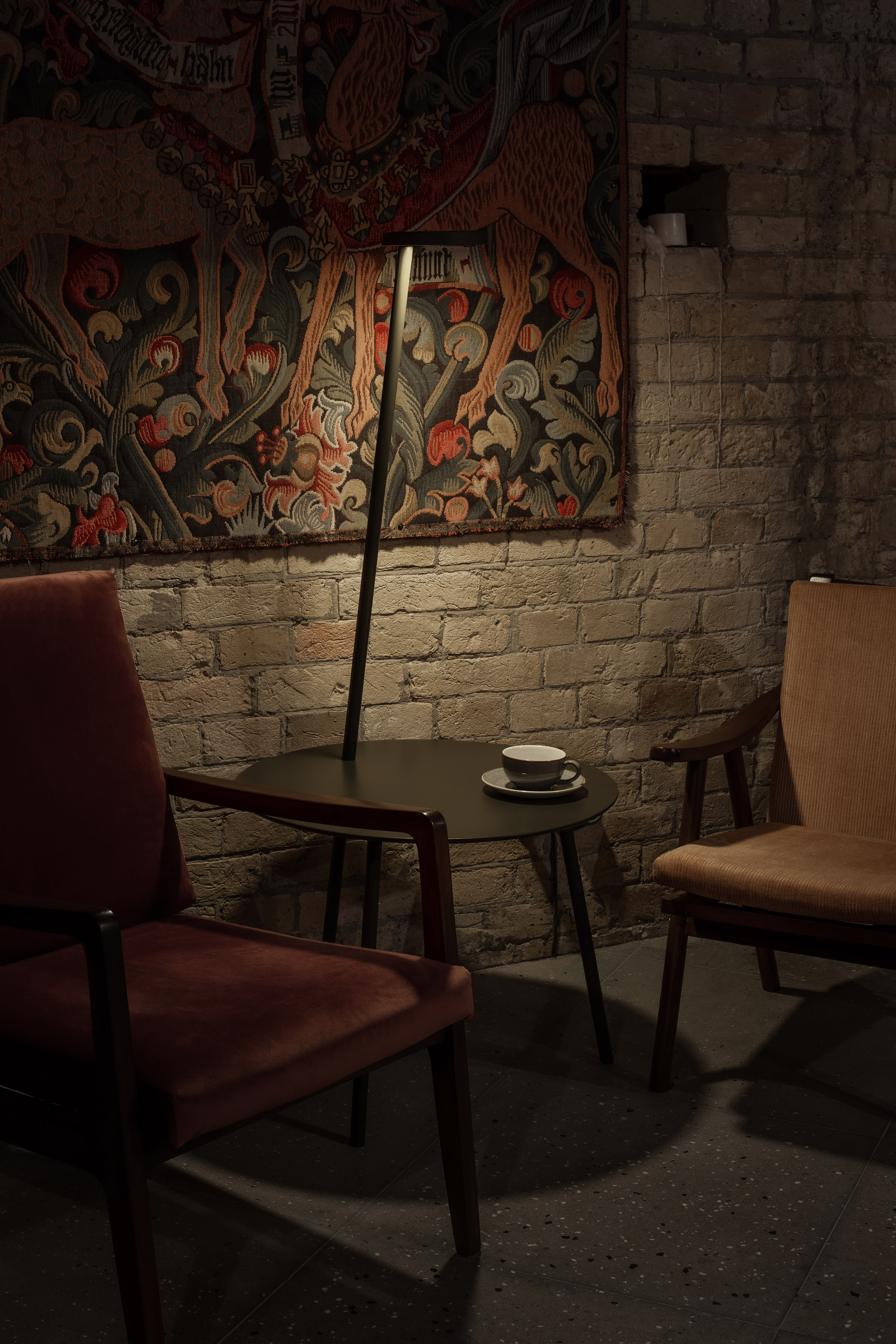 Lighting is provided by a mixture of candles and hooded, yellow-tone pendant lamps, lending the bar with what the studio describes as a “dungeon-like” ambience.

“People can take refuge in it – when you get there, time seems to stop.” 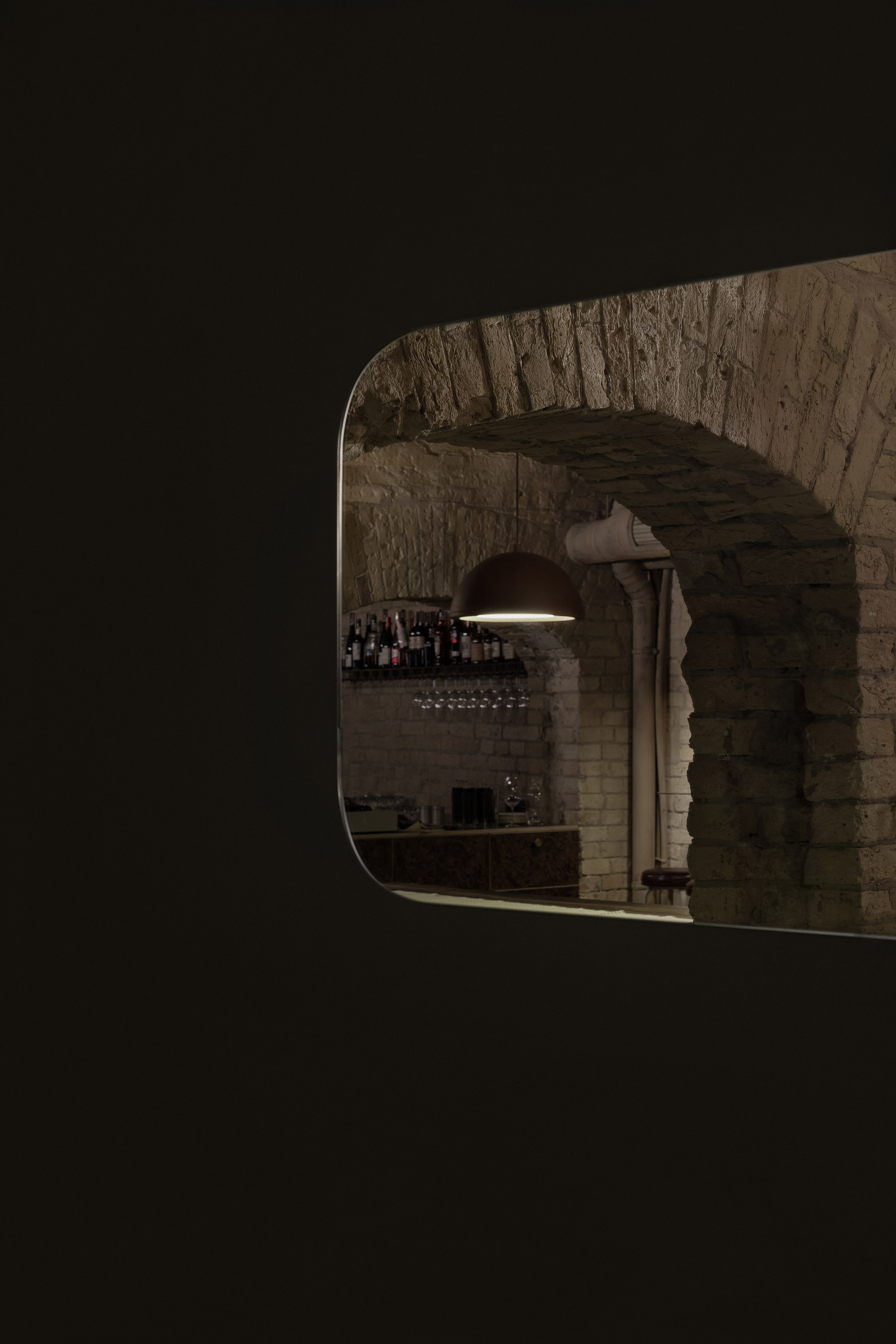 This isn’t the first project that Rina Lovko Studio has completed on home turf – at the end of last year, the studio transformed a Soviet-era workshop on Kiev’s Dneiper river into a florist.

Photography is by Yevhenii Avramenko.

The post Balthazar is a bottle-green bar beneath a market in Kiev appeared first on Dezeen.