We’re delighted to present The Connor Brothers’ latest works in collaboration with TI Media and Runway Gallery. These limited-edition prints are available to buy exclusively at the Runway Gallery.

The Connor Brothers were invited to plunder our archives at TI Media to find images they could refashion to create the two exciting new limited-edition prints, revealed below. There are only 25 of each available at runway-gallery.com, so head online now to secure yours.

Visit our news category for more stories from the art world With their reworkings of vintage Mills & Boon book covers accompanied by witty texts that capture the preoccupations of our millennial world, The Connor Brothers burst onto the art scene in 2013. The Missouri-born twins, Franklyn and Brendan, were raised within a secretive Christian cult called ‘The Family’, running away at 16 and travelling across America on freight trains before settling in Brooklyn. Their art, they explained, came about as they tried to ‘make sense of the world’ they’d been deprived of.

All pretty compelling stuff. Except that, just like a Mills & Boon romance, the story was pure fiction. The pair, Mike Snelle and James Golding, are in fact childhood friends who both share troubled pasts: Liverpool-born Mike had suffered from bouts of severe depression since childhood, while James, who was raised in Cambridge, had battled with anxiety, resulting in heroin addiction and run-ins with the police. The fictional pseudonym, which they maintained for two years, was developed to shield them from the public glare. Meeting them in their studio in Hackney, east London, Mike and James are both warm, articulate and remarkably candid about the real people behind their mythical personae. ‘In 2012, I was depressed and suicidal and I called up James who encouraged me to get professional help; I was diagnosed with bipolar,’ recalls Mike.

‘During that time we ended up living together and we were talking about very difficult personal things. We began making these collages out of counter-cultural comics from the 70s and Mills & Boon covers. It was a distraction, we were making each other laugh.’ Inadvertently, the art provided the pair with a form of therapy that helped them gain some much-needed stability – and when they finally broke cover, they were able to use The Connor Brothers’ name to highlight issues surrounding mental health.

‘We did a TED Talk in Hong Kong and we were both terrified but afterwards people came up and shared their stories; you realise that there’s something useful in doing this,’ notes James, who together with Mike has become an ambassador for male suicide prevention charity, CALM.

Unsurprisingly, The Connor Brothers’ art often explores truth and fiction, as witnessed in one of the two exclusive limited-edition prints they have created in collaboration with Livingetc’s parent company TI Media and contemporary art platform, Runway Gallery, where the works are available to buy. The pair were invited to plunder the magazine archives of TI Media, and one of the images they have refashioned – taken from a 1960 edition of Woman’s Realm – depicts a beautiful blonde with the message, ‘There’s nothing so seductive as a dangerous idea’. 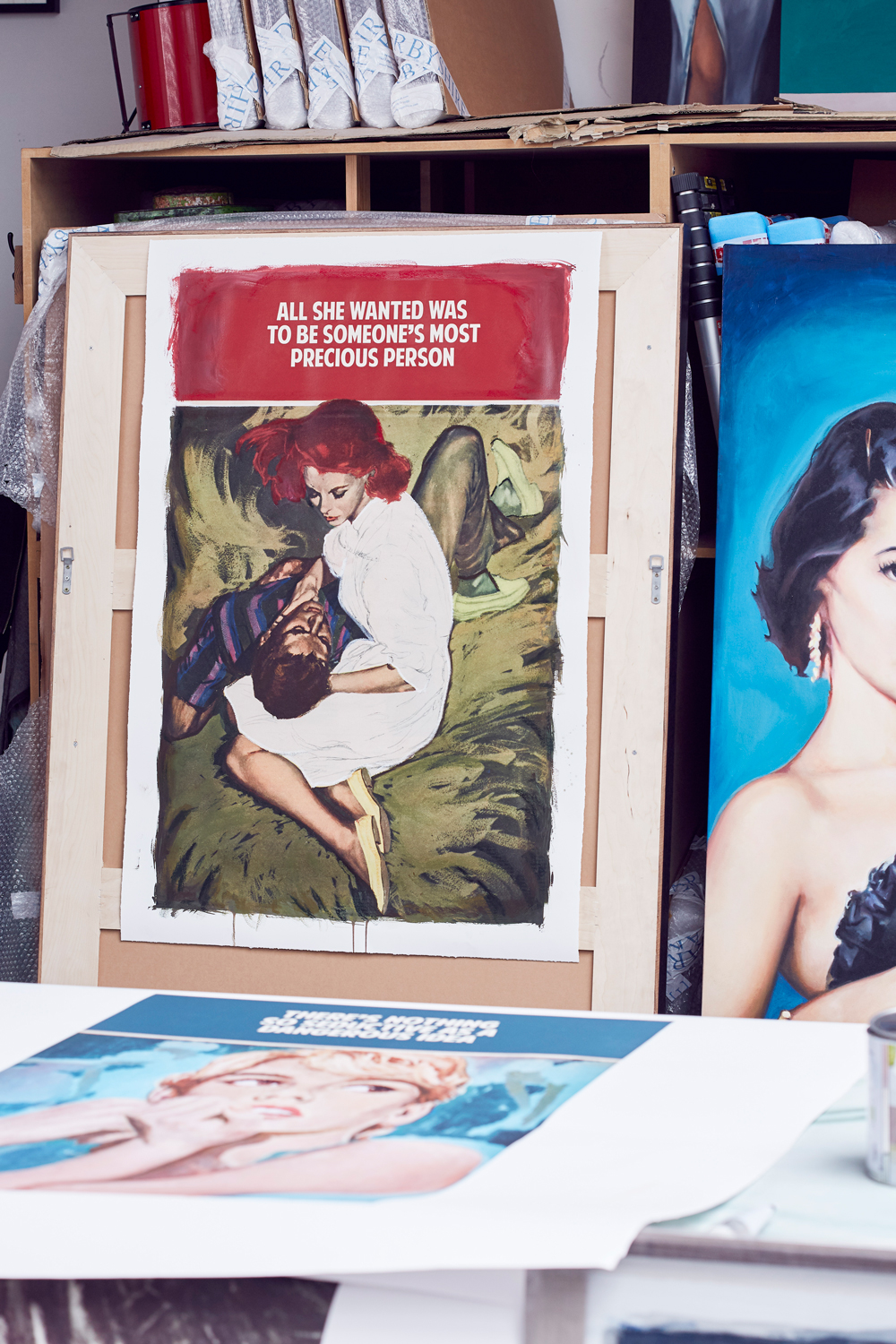 ‘I’ve always been a bit obsessed with a hoax that was done in the 1970s by American novelist Clifford Irving who wrote a fictional biography about the reclusive billionaire Howard Hughes; it was the most expensive book ever sold,’ recounts Mike. ‘In an interview he explained that it was never about the money, it was the elegance of the idea that made it undeniable.’

For the pair, the process of working through the archives was fascinating: ‘There are literally thousands and thousands of magazines,’ says Mike. ‘We tended to focus on illustrations that had been put into print using lithography; there’s something a bit more real, more visceral, maybe, about this style.’ Mike and James are currently working on a body of work that celebrates Britain’s young, inspiring people, and will see a departure with the introduction of photography. ‘The covers we have used in the past tended to feature white females, and we wanted to create work that is more representative of the diversity of contemporary Britain, so we’re using photographs to recreate vintage book covers,’ explains James.

‘There is a lot of negativity about Britain at the moment but we look at the young and they are so politically aware and awake to social injustice,’ adds Mike. ‘This new generation is exciting – I actually think there’s a lot of hope for the future.’

One minute with The Connor Brothers Describe your style.It’s a mix of dark humour and philosophical insight. Our collages explore the boundaries between truth and fiction, and raise questions about how we construct meaning from experience.

Inspiration?Ideas start as conversations, usually in taxi rides or at the pub. We have on-going themes that interest us, such as prison reform, addiction, mental health and the nature of reality.

Tell us about the collaboration.It was a fascinating process. There are literally thousands of magazines in the archives. We focussed on illustrations that had been printed using lithography; there’s something more real, visceral maybe, about this style

Artwork display advice?Stay true to your style and personality and arrange pieces to appeal to you. We love the cluttered ‘old salon style’ displays, where pieces are mixed and matched, floor to ceiling. For more about the Connor Brothers, visit theconnorbrothers.com, or head to the Runway Galleryto buy the two exclusive limited-edition prints.