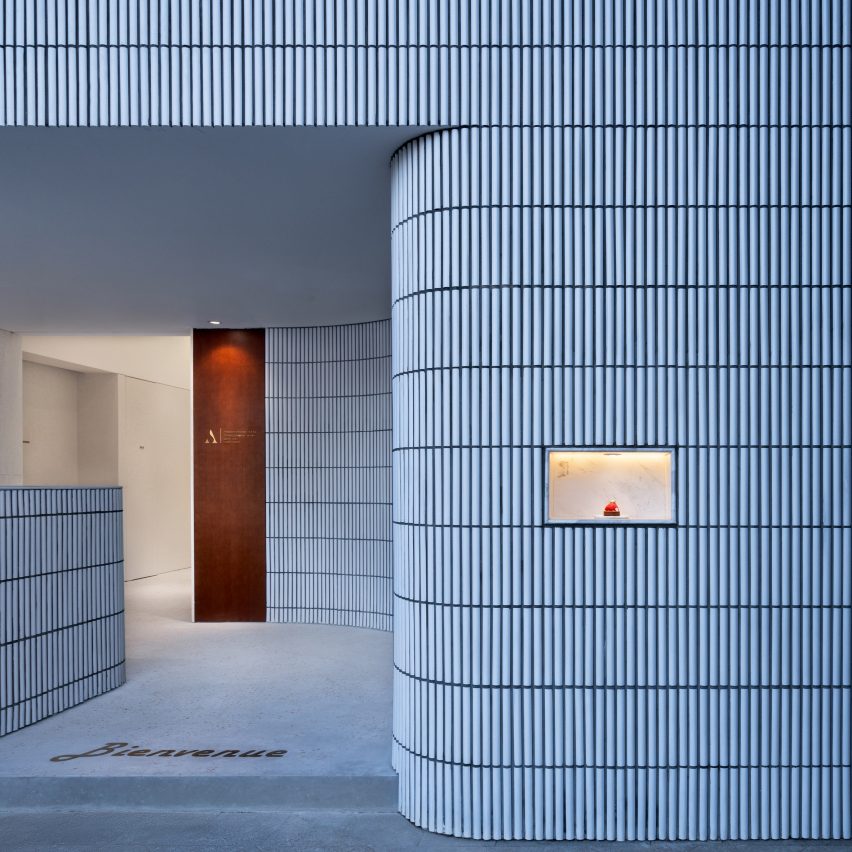 A sloping wall clad in slim white tiles hides the formerly problematic facade of this minimal patisserie in Hangzhou, China, which has been designed by Say Architects.

Located in the city’s Xiasha district, the 150-square-metre Angelot patisserie occupies an awkward site with an entrance set back from the street.

One third of the storefront was previously blocked by a ventilation shaft, and the interior also had an unpleasant view of the building’s rear.

“Instead of simply hiding all these disadvantages, we tried to use and connect them with a simple concept — a gradually disclosed sense of ritual,” explained Say Architects. 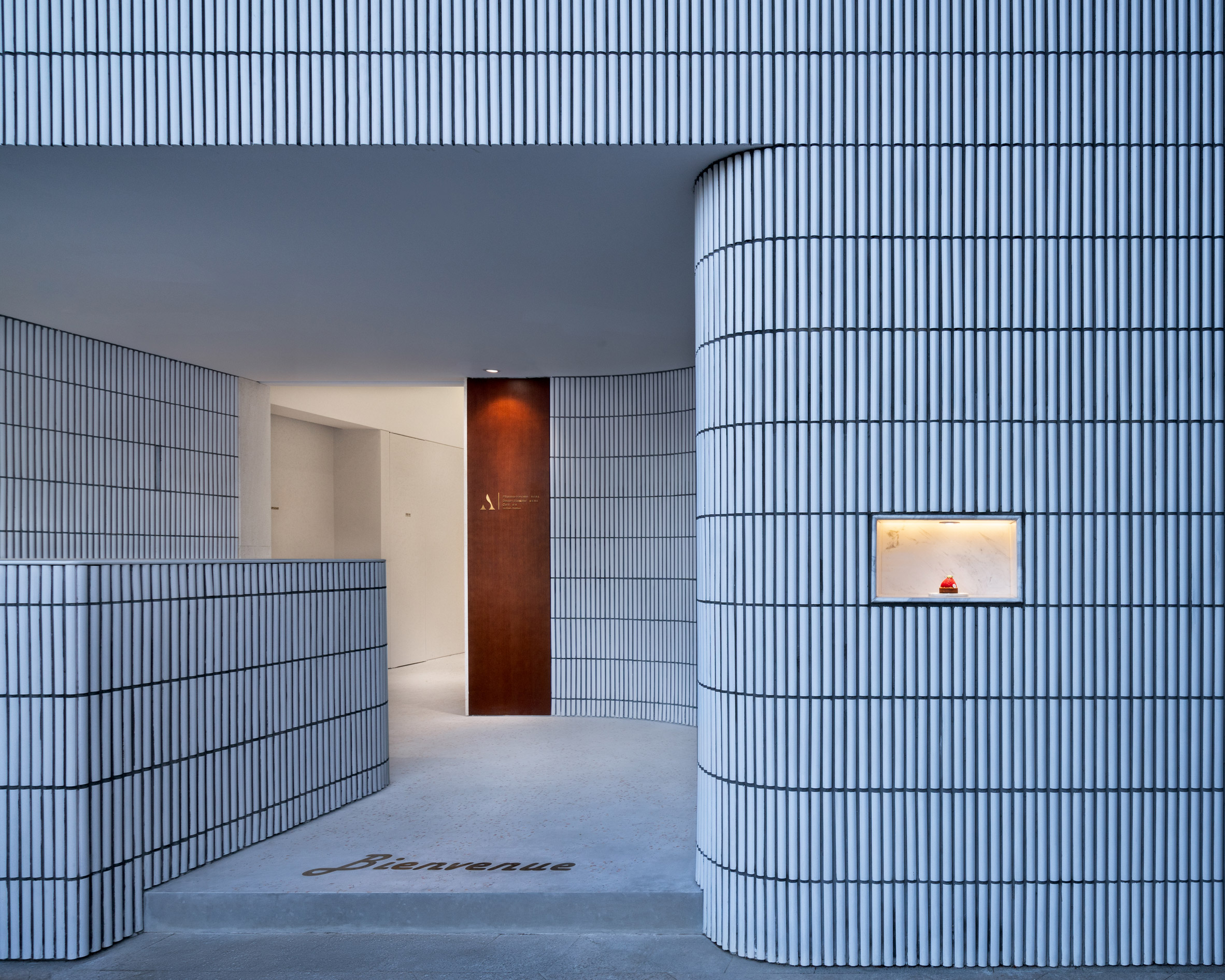 Working around the ventilation shaft, the Chinese studio inserted a curved wall clad in custom white tiles that leads visitors from the street around a corner to the entrance on the left.

The slim, rectangular tiles are lined with black grout, creating a grid on the patisserie’s facade. 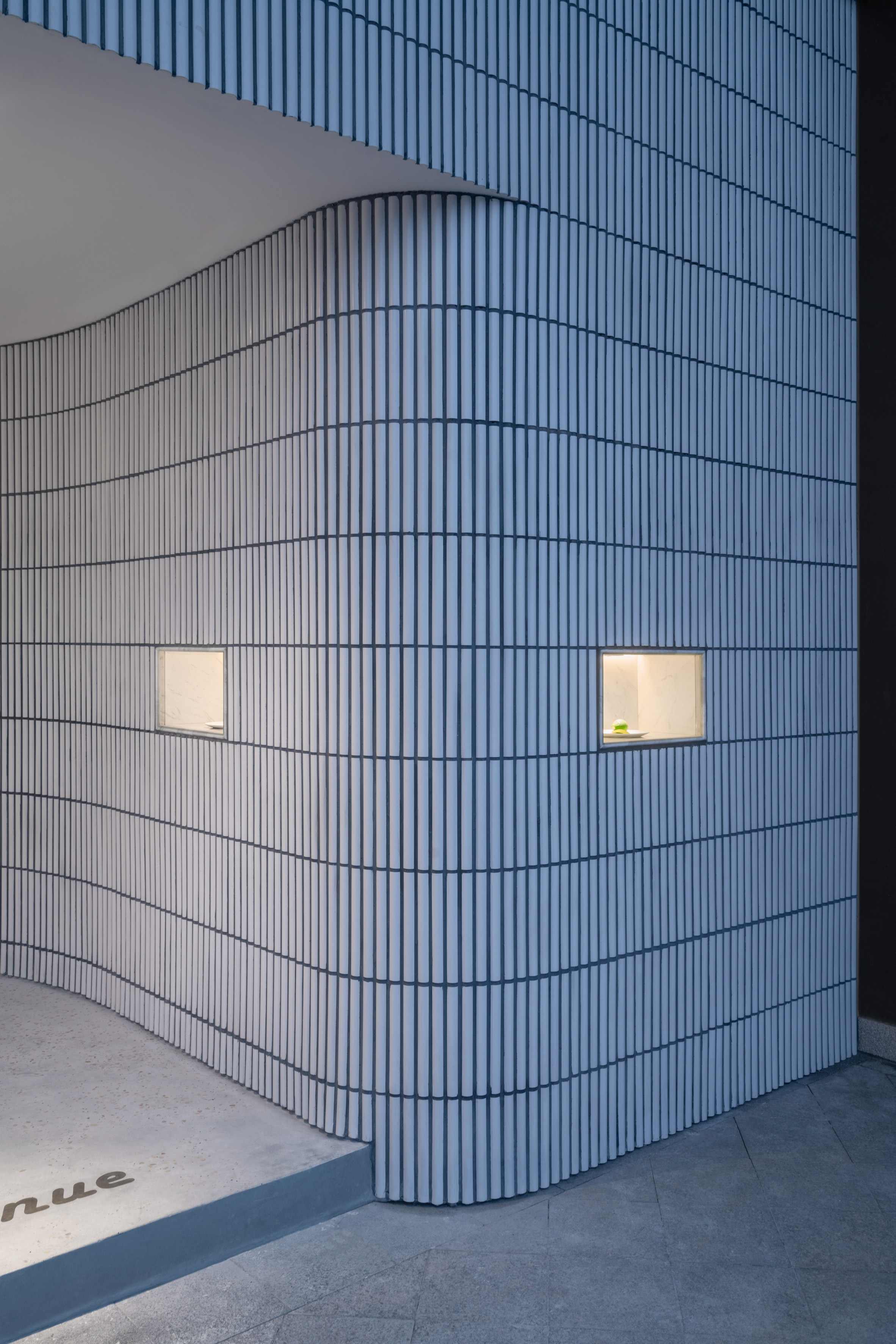 Inside, the practice wanted to create an intimate and soft space.

“The main tone of the brand Angelot is actually orange, which is intense and fast,” the practice’s co-founder Yan Zhang told Dezeen.

“We think patisserie should be more soft and gentle, so we selected this neutral-minimal style and applied orange in other ways, like the small orange stones integrated in the floor and the leather that has an orange tone.”

Upon entering the store, customers pass through a reception area before arriving at the main dining space.

Off-white terrazzo covers the floor, and the counter is composed of three large sandstone stone blocks topped with white marble.

One of the blocks is integrated with a glass box that displays different cakes, while another is used for taking payments and making hot beverages. The third block offers a place for customers to stand and enjoy their drinks.

The front of the counter has been fitted with a couple of leather-wrapped handrails and a walnut panel that partially obscures the coffee machine. 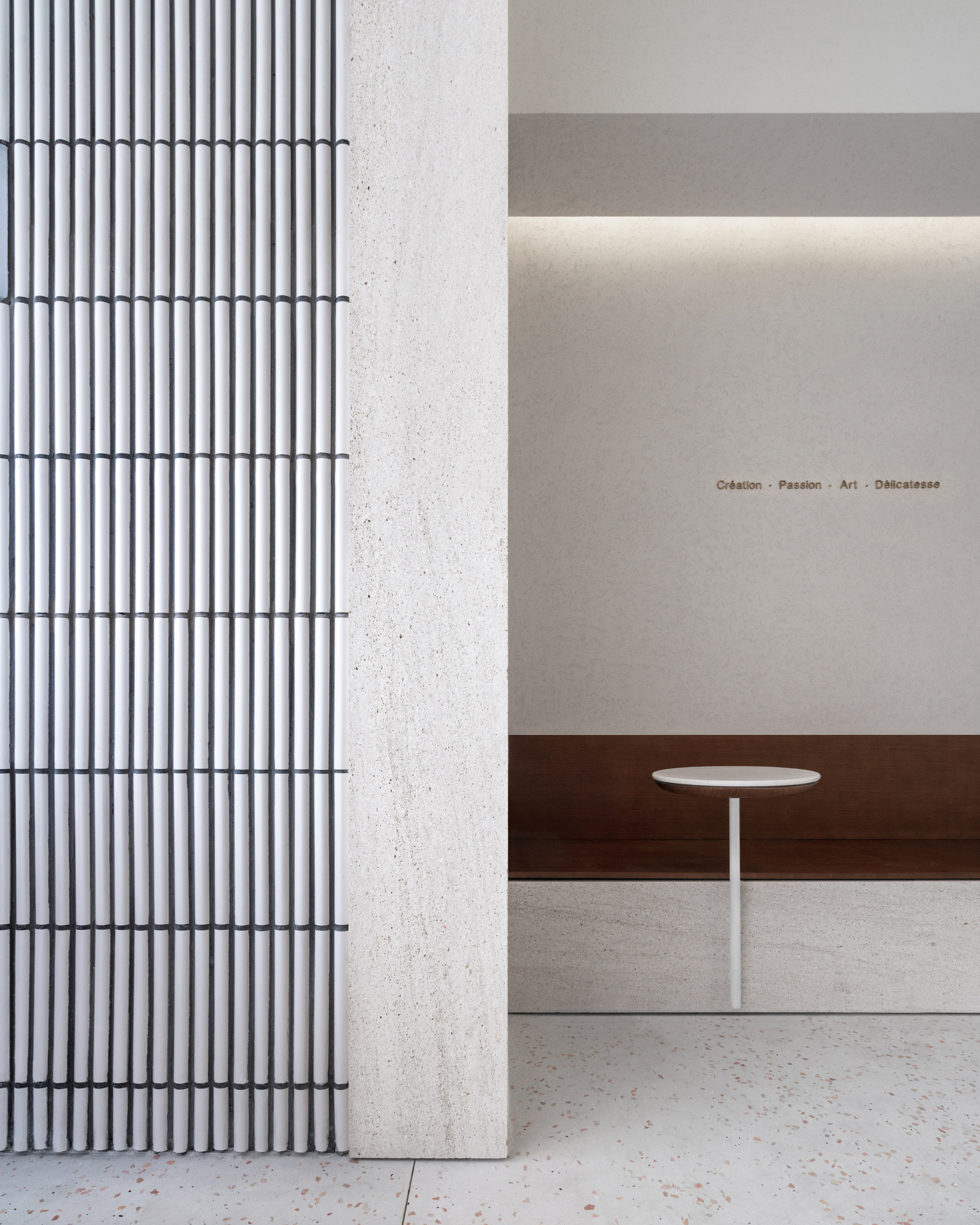 To create a sense of drama, the practice lowered the ceiling through the curved entrance corridor to amplify the experience of entering the dining room, which has a much taller ceiling.

“This changing clearance enhances the atmosphere of entering the space,” the practice explained. “It’s a path leading towards a secret garden which slowly unfolds spaces to guests.” 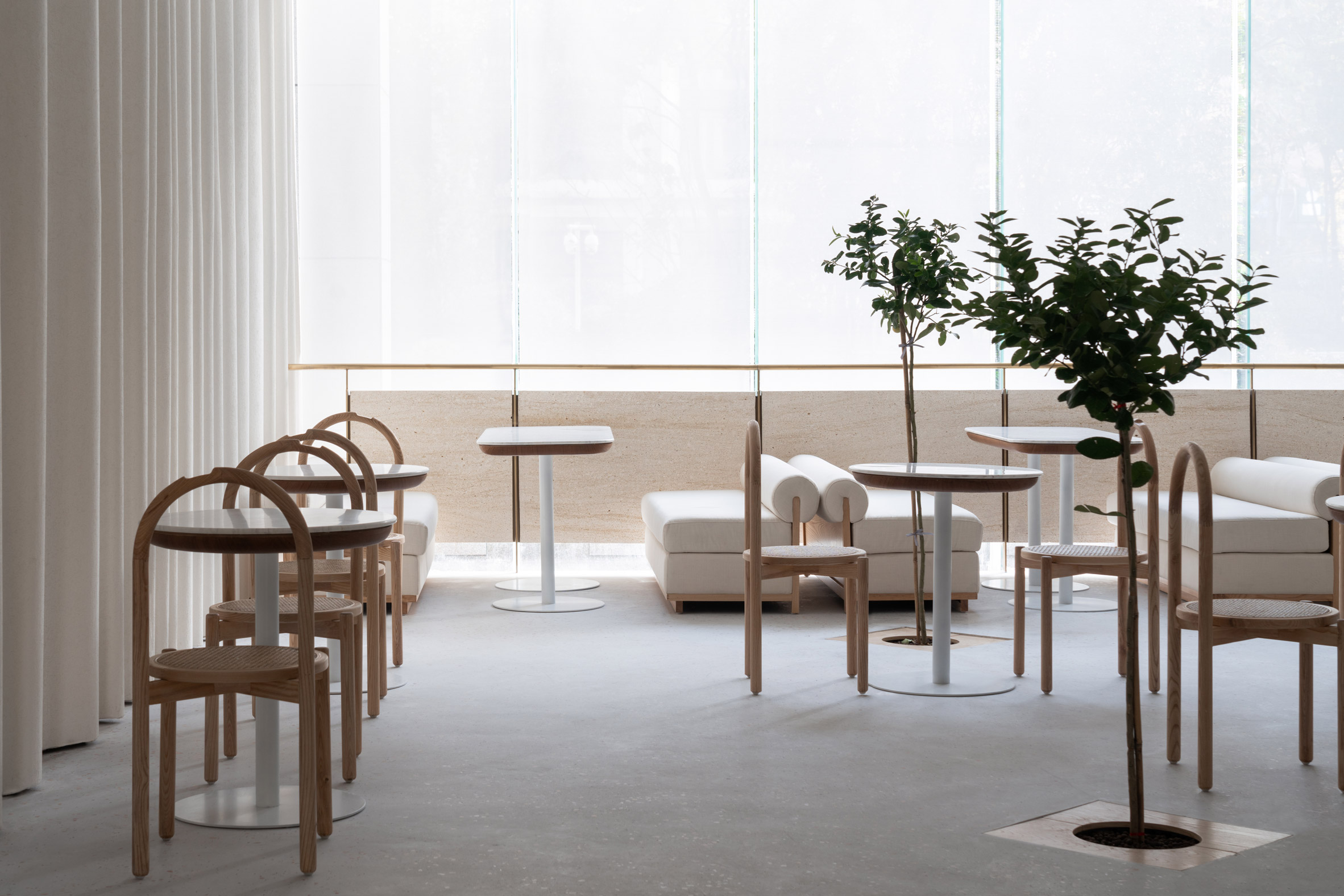 Sheer curtains hang in front of a row of floor-to-ceiling windows that span the rear wall to block the exterior view but still allow sunlight to pass through. 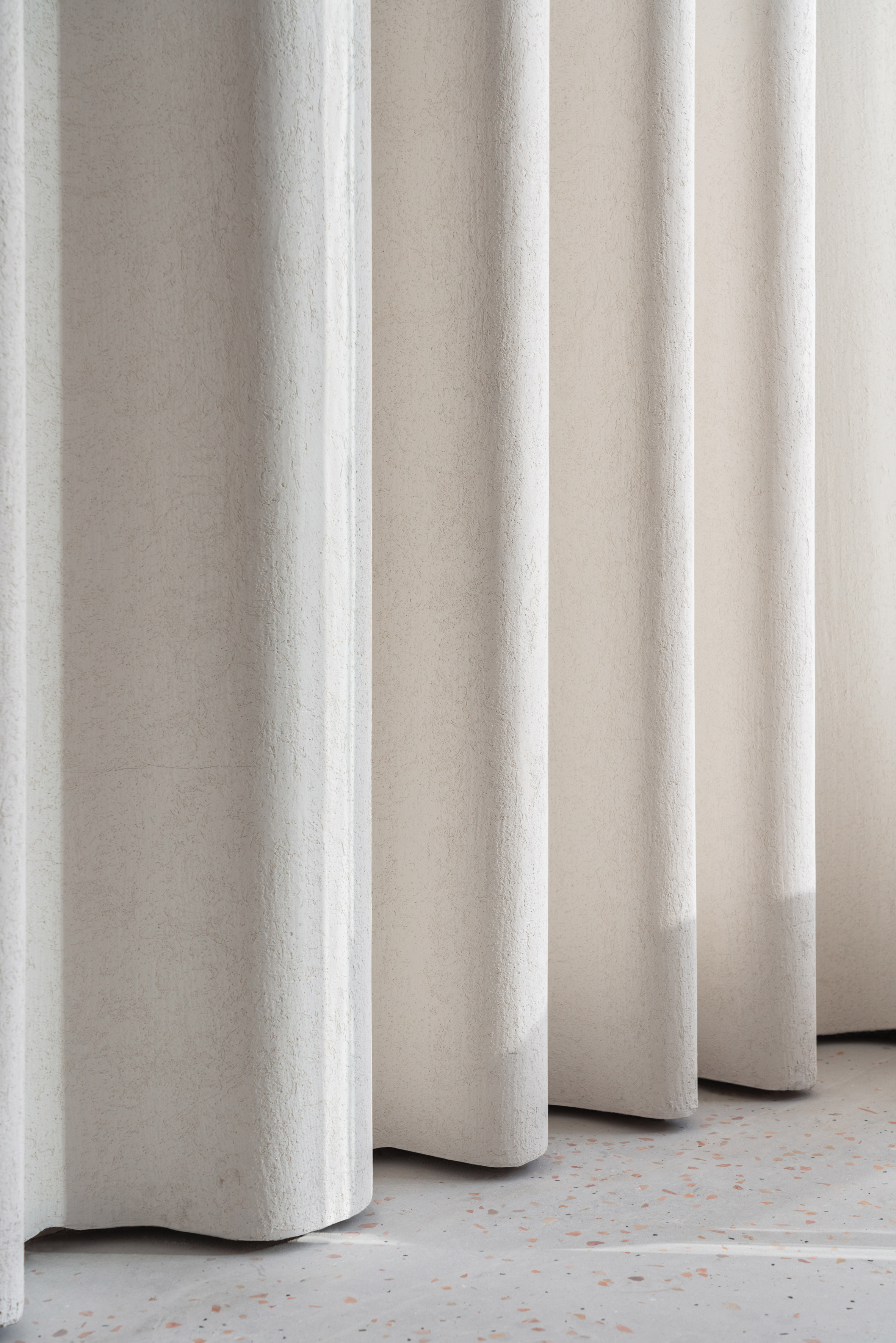 “At the climax of the circulation, the dining area doesn’t have a nice view to see, it is only filled with light to be felt,” added the practice.

“Sunlight touches the glass-reinforced concrete walls and brings this fabric-like texture out of it. The lemon trees divide the dining area vaguely, and a peaceful and gentle space is therefore created and kept.” 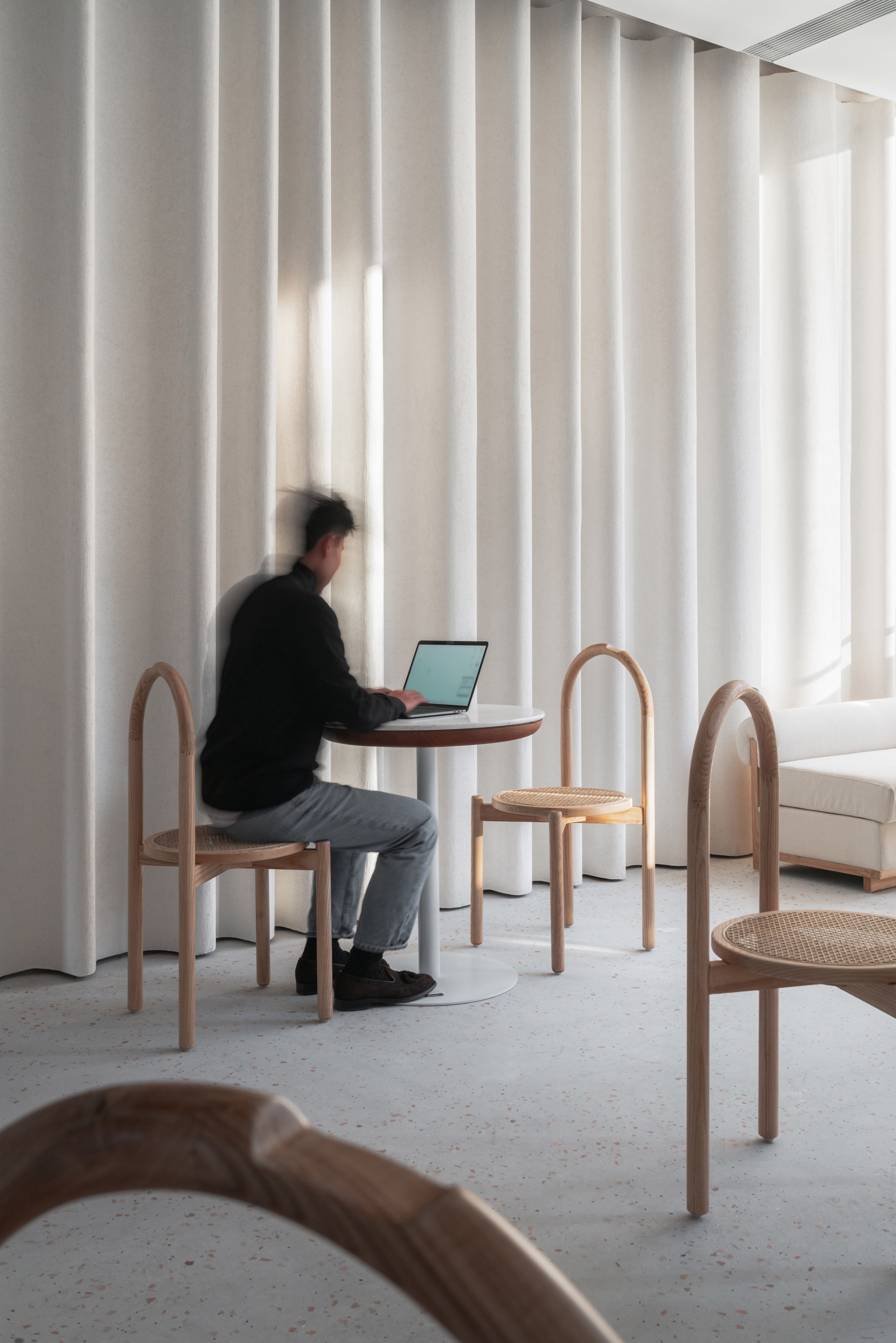 Say Architects was founded by Yan Zhang and Jianan Shan in 2016 and is based in Hangzhou.

Elsewhere in the city, the practice has completed a grooming salon for pets, which includes a sunken cafe, playground and a paddling pool where four-legged visitors can for a dip.

Photography is by Hao Zhang.