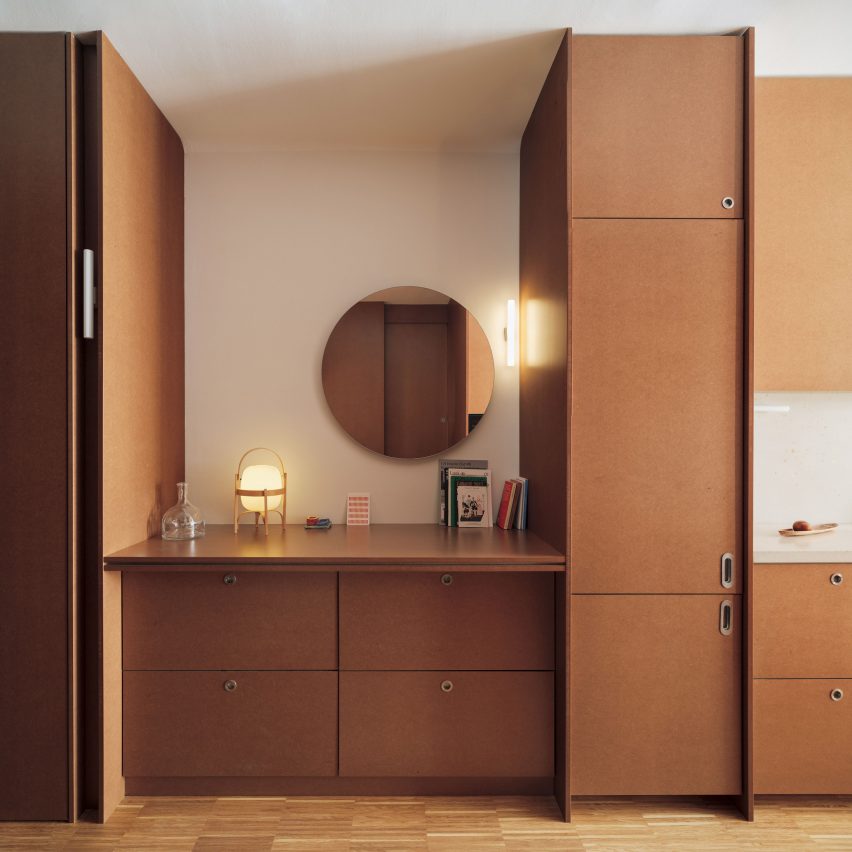 Built-in furniture and storage elements made from MDF feature inside this Barcelona apartment, which has been overhauled by local architecture practice MH.AP Studio.

Located in the city’s La Bordeta neighbourhood, An Attic for David features an abundance of built-in furniture, as well as carefully-positioned mirrors to make the home appear more spacious. 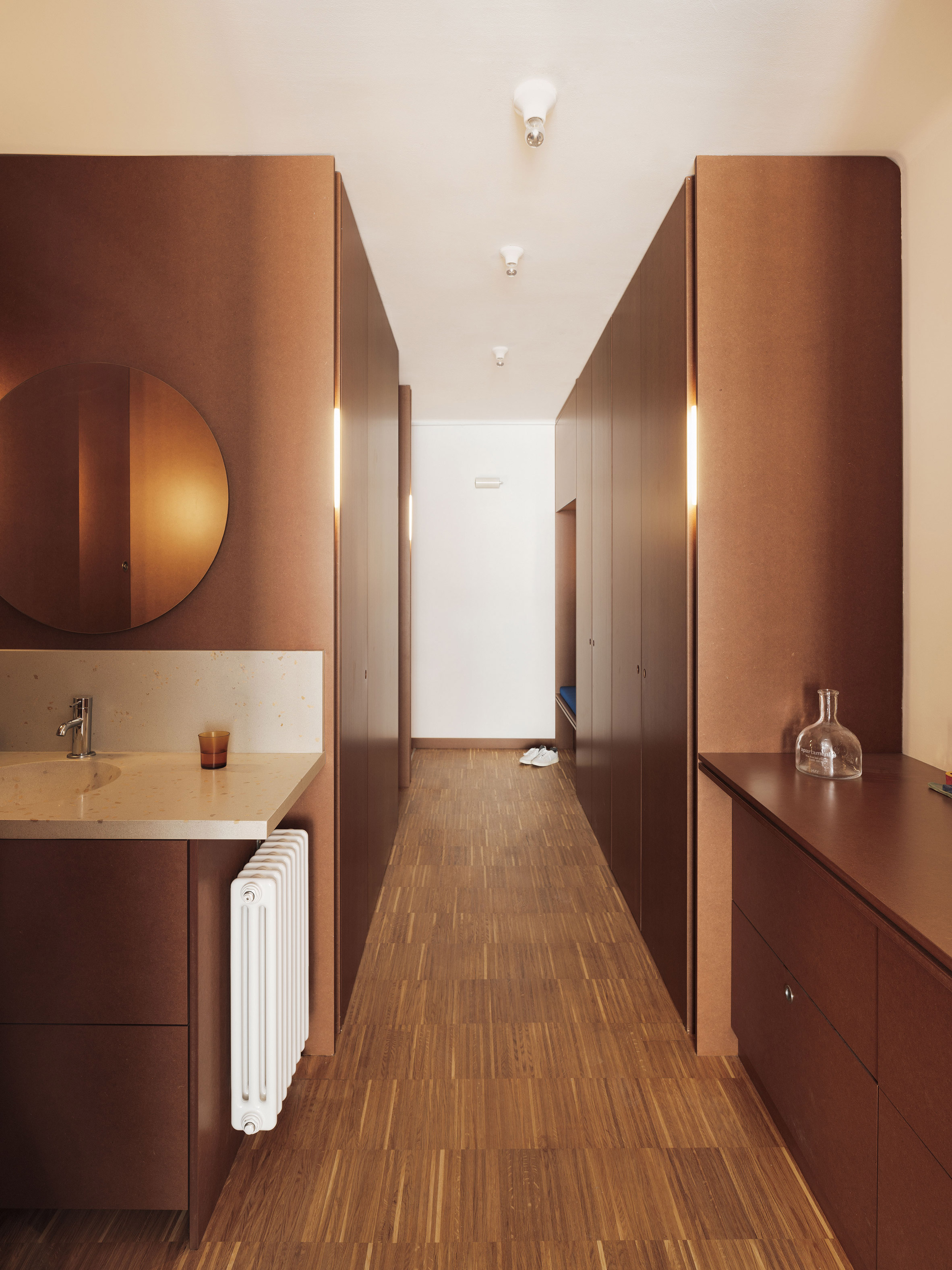 MH.AP Studio was disappointed with the original configuration of the 70-square-metre flat, which previously had a long corridor and an adjoining row of small, dark rooms that weren’t taking advantage of sunlight from the outdoor terrace.

The studio’s main goal was to broaden the home without losing any rooms. 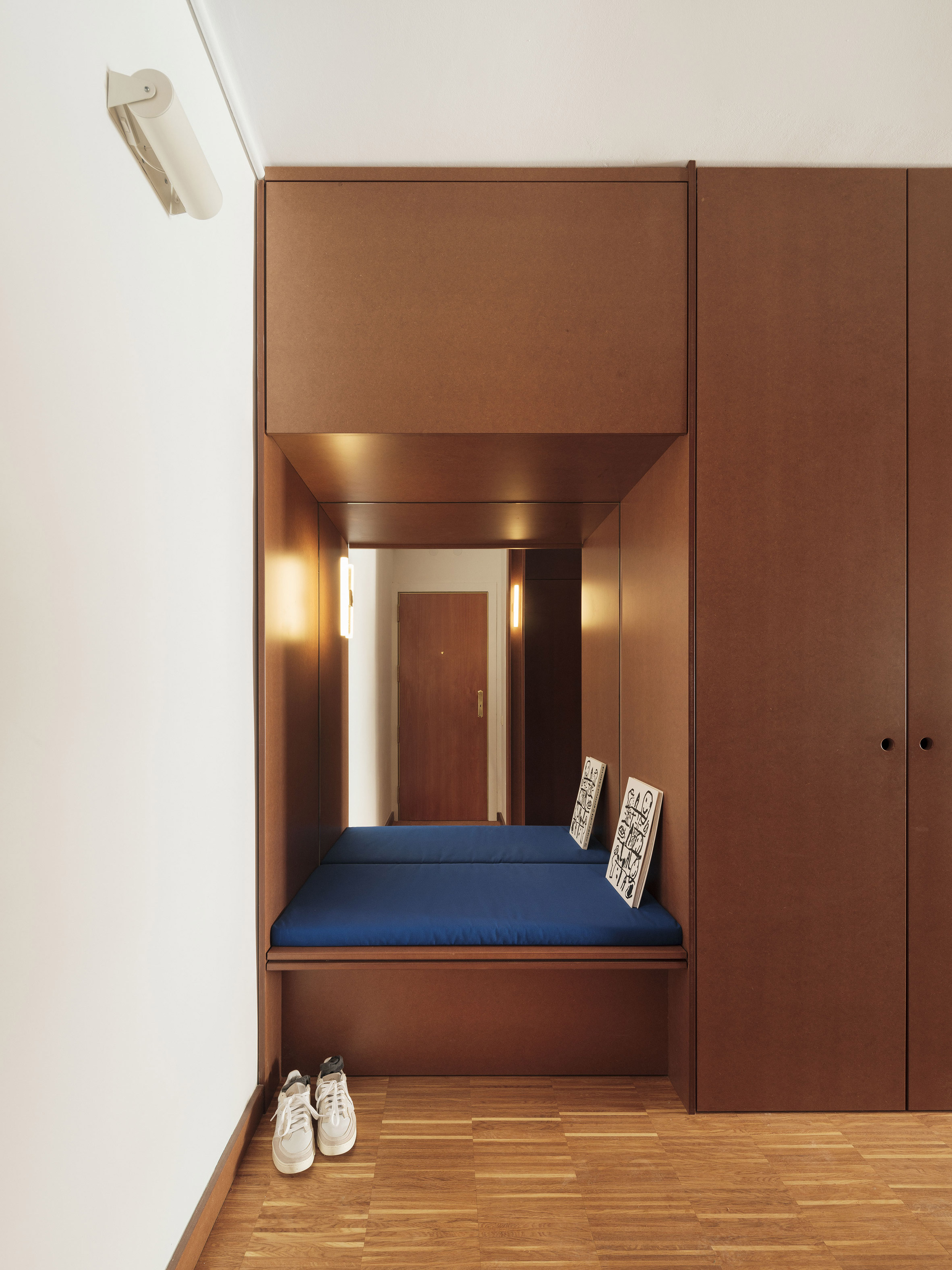 “As we entered the original flat we thought: the terrace is not connected to the living room, what a shame!” explained the studio, which is run by architects Marina Huguet and Andy Penuela.

“To optimise the space, conventional limits had to be diffused.” 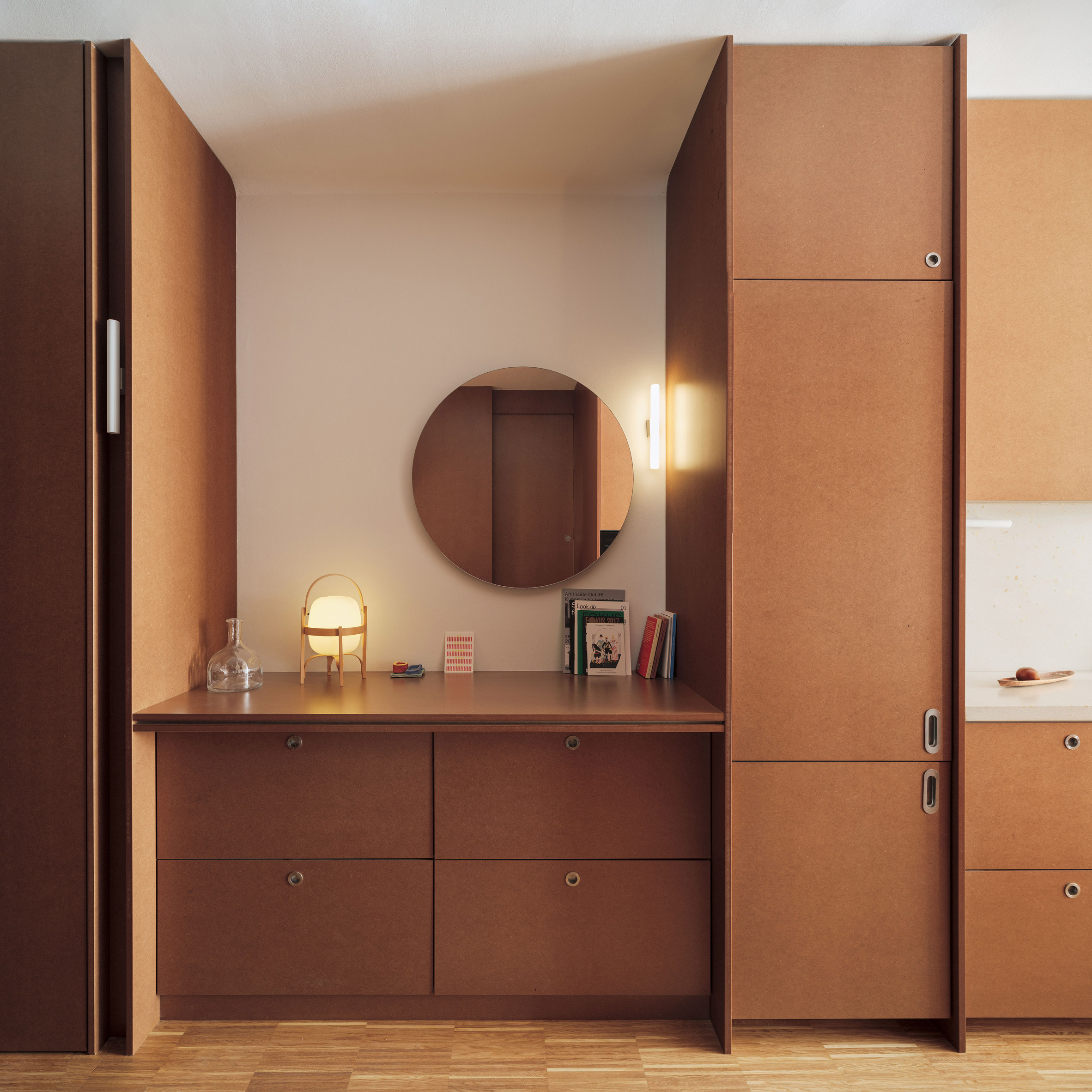 The flat’s new layout sees the hallway transformed into a multifunctional space that accommodates a kitchen suite and wardrobes on one side, and a 60-centimetre-deep desk, dressing table and bench seat on the other.

All furniture and cabinetry is made from matte-finish MDF. The studio selected the material in that hope that it would create an enveloping, warm feel in the apartment, especially when combined with the oak parquet flooring and darkness of the corridor.

“We also work with raw materials for the natural way they age and patina, and to meet the budget,” Penuela told Dezeen. 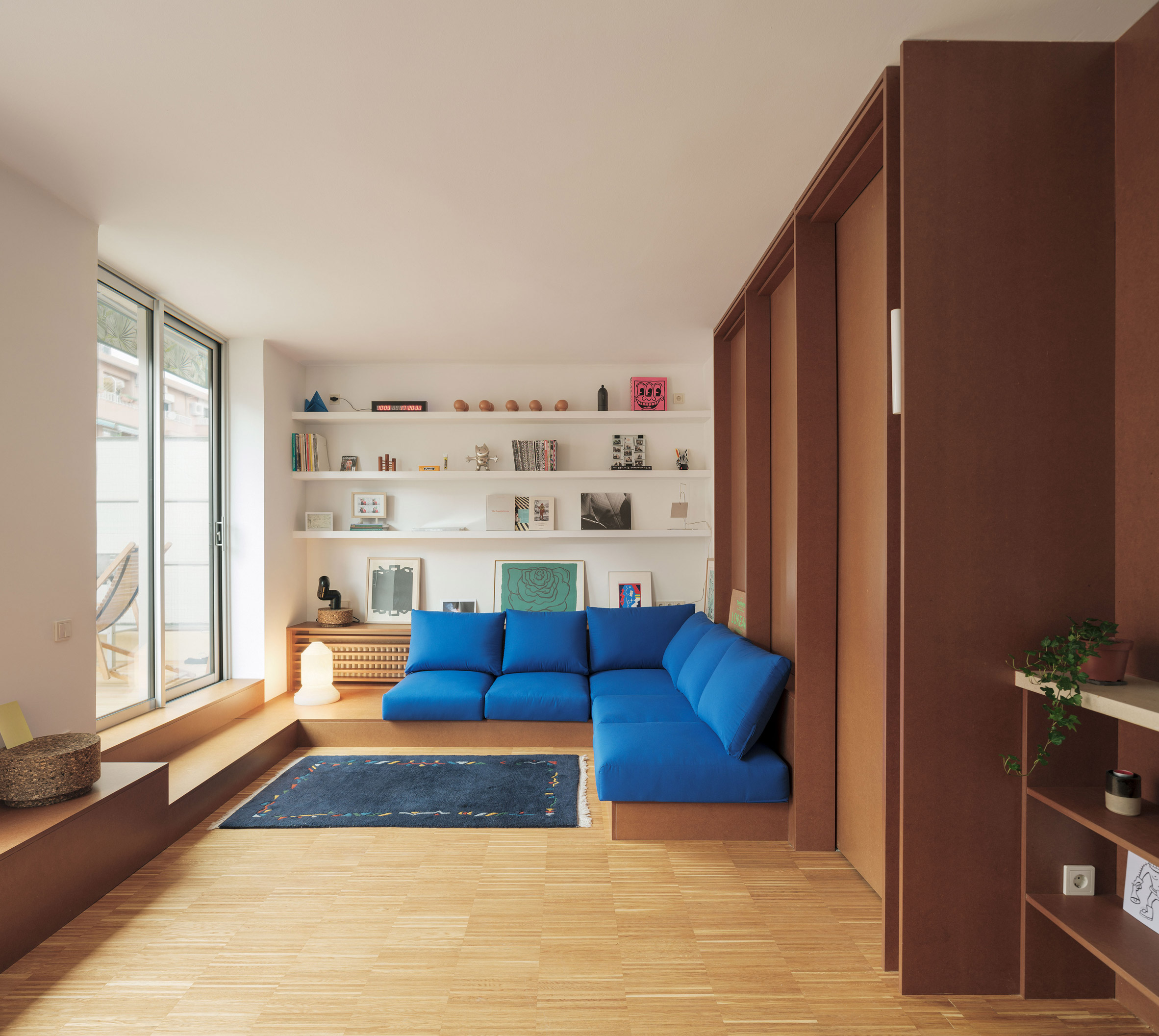 Two bedrooms and a bathroom are located in rooms along the corridor and accessed through sliding doors that match the cabinetry.

At the end of the corridor, a large open-plan living and dining room is revealed. Spanning the entire width of the flat, the area looks out onto the terrace which is accessed through sliding glass doors.

Here a low, L-shaped sofa with bright blue cushions wraps the corner of the room. It’s built into a wall of shelving which displays artworks and decorative objects. 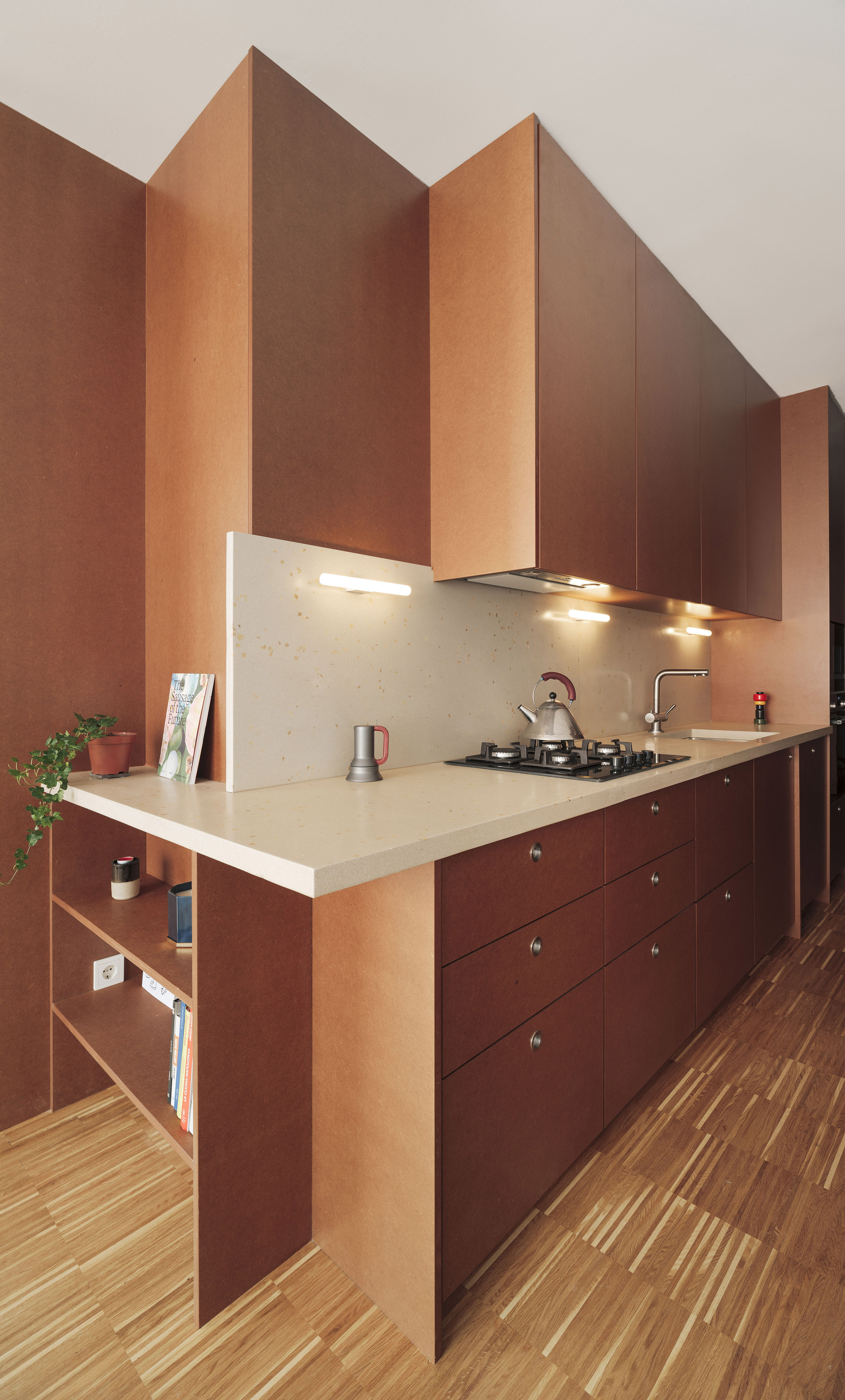 The bathroom, which is accessed via the corridor and the master bedroom, is clad in grass-green tiles that contrast the apartment’s otherwise brown surfaces.

The sink is placed outside the bathroom in the hallway – a feature that was inspired by a sink in the hall of French-Swiss architect Le Corbusier‘s notable project Villa Savoye. 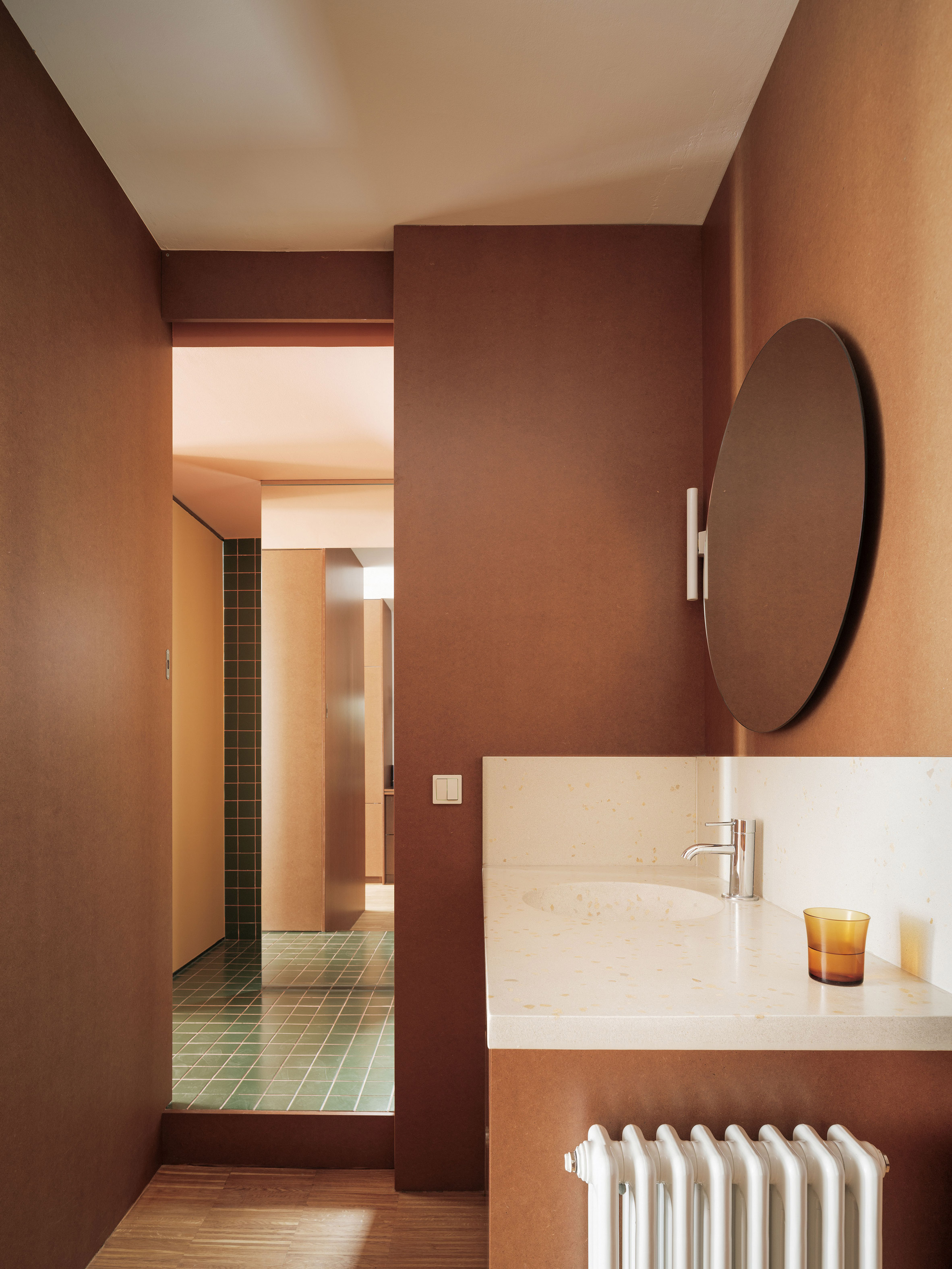 “The sink in Villa Savoye is a device that Le Corbusier placed in the entrance lobby for hygienic reasons,” explained Penuela.

“What we enjoy about this act is not its functional reason, but the displacement of a domestic element in an unexpected space,” he added.

“Why can’t the corridor be something other than a place to get from A to B? It’s just a waste of space. In this case, the corridor allows for more activities, blurring the program.” 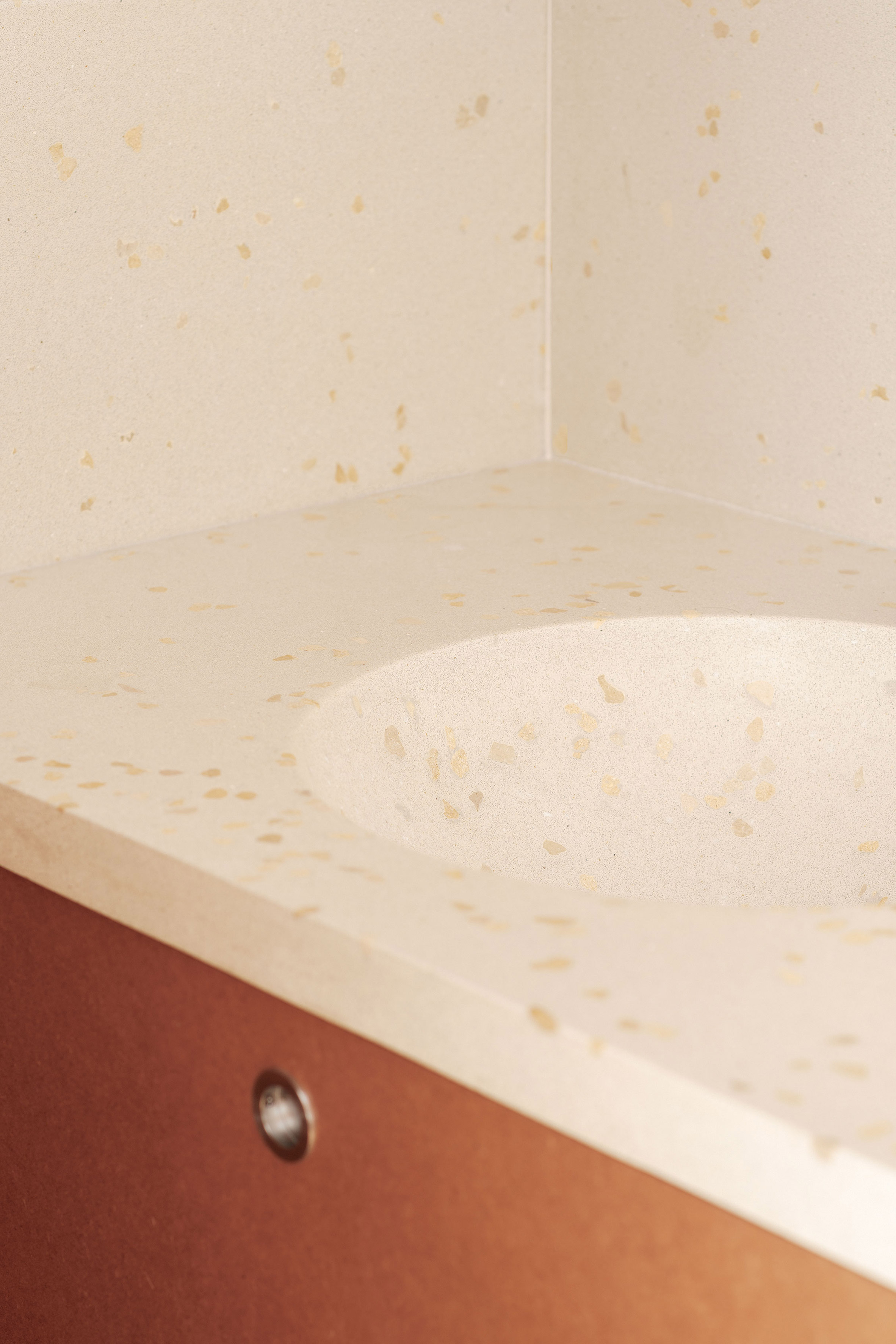 The countertops of the kitchen in the corridor and the hallway sink are crafted from a custom terrazzo by Mallorcan company Huguet.

Several mirrors have also been inserted throughout the apartment to make living spaces appear larger and bounce natural light into the dark corridor. A reflective panel in the bathroom additionally helps conceal the shower. 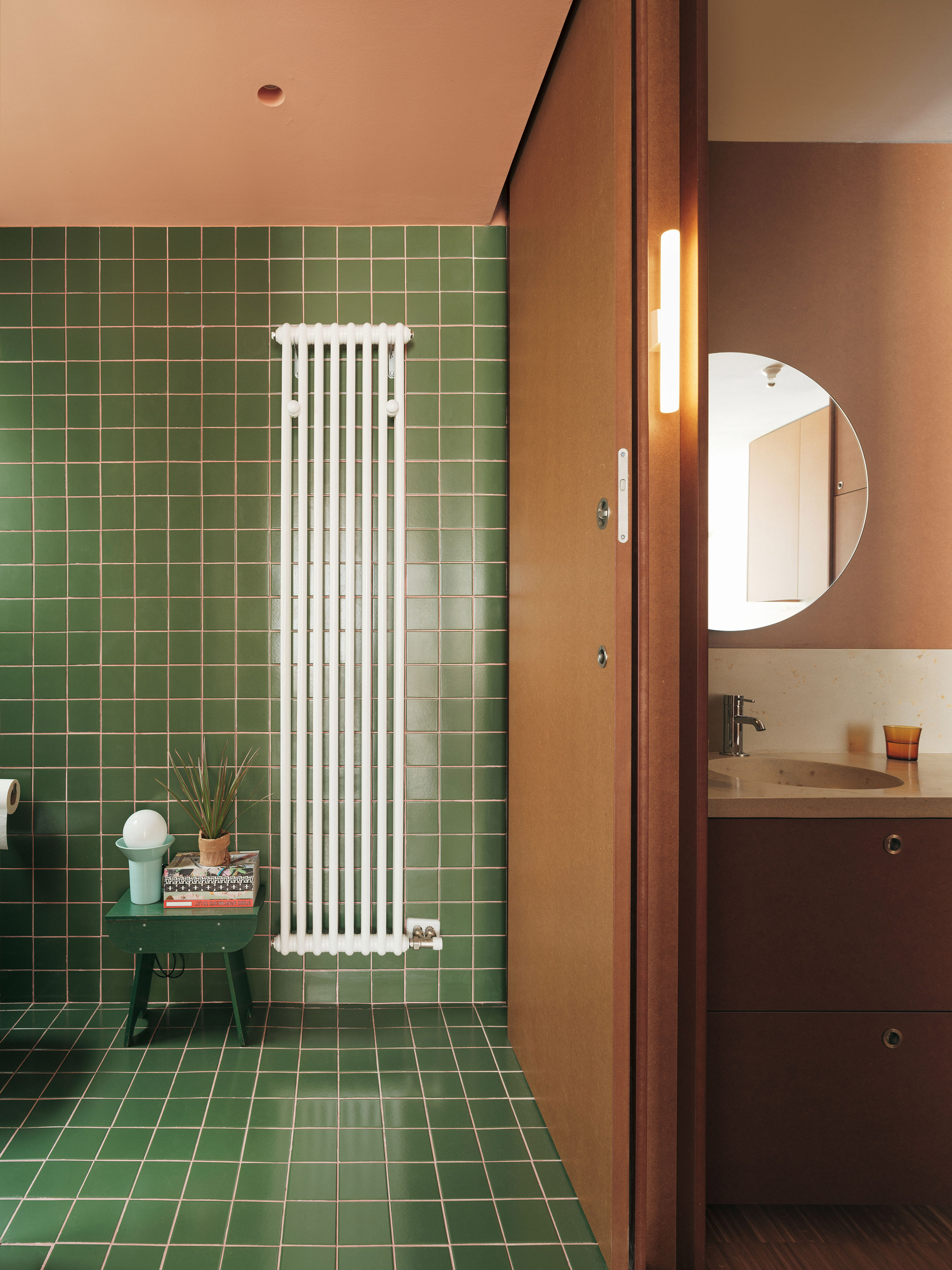 The buzzing city of Barcelona is host to a number of design-focused apartments. Recent examples include a flat in the Sarrià-Sant Gervasi neighbourhood that Arquitectura-G finished with entirely yellow surfaces and another in the El Born area that Colombo and Serboli Architecture updated with colour-block cabinetry.

Photography is by Luis Diaz Diaz.

The post An Attic for David in Barcelona features a cosy interior crafted from MDF appeared first on Dezeen.