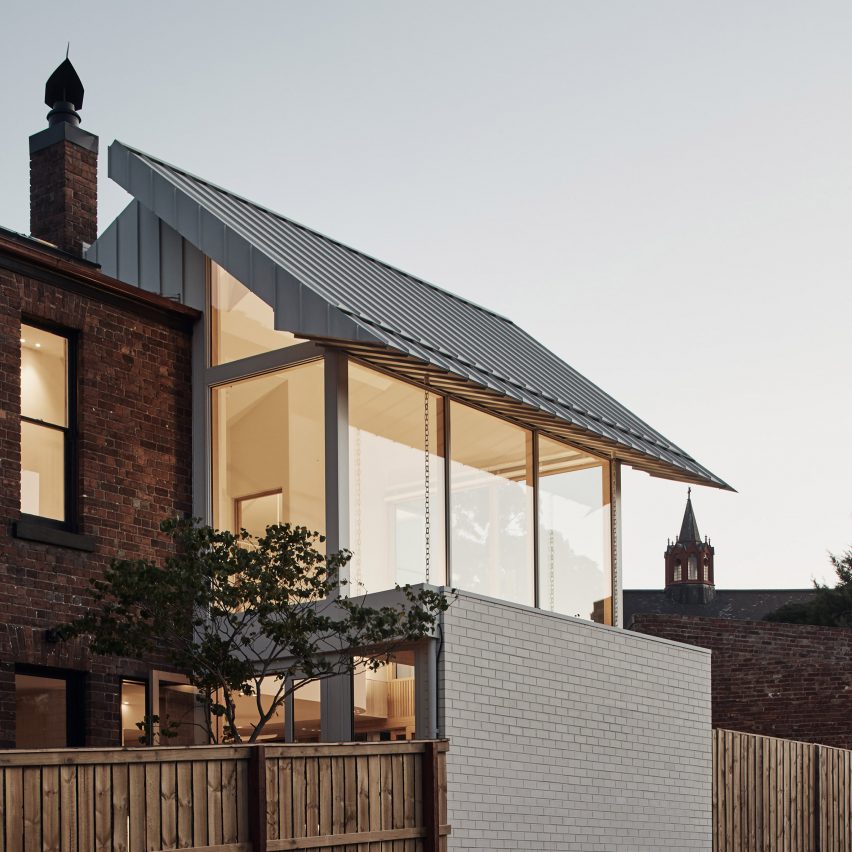 Originally built in 1876, Lantern House formerly had a dark and poky interior that meant its owners – a young couple with two children and a dog – were longing for a home with an open-plan layout. 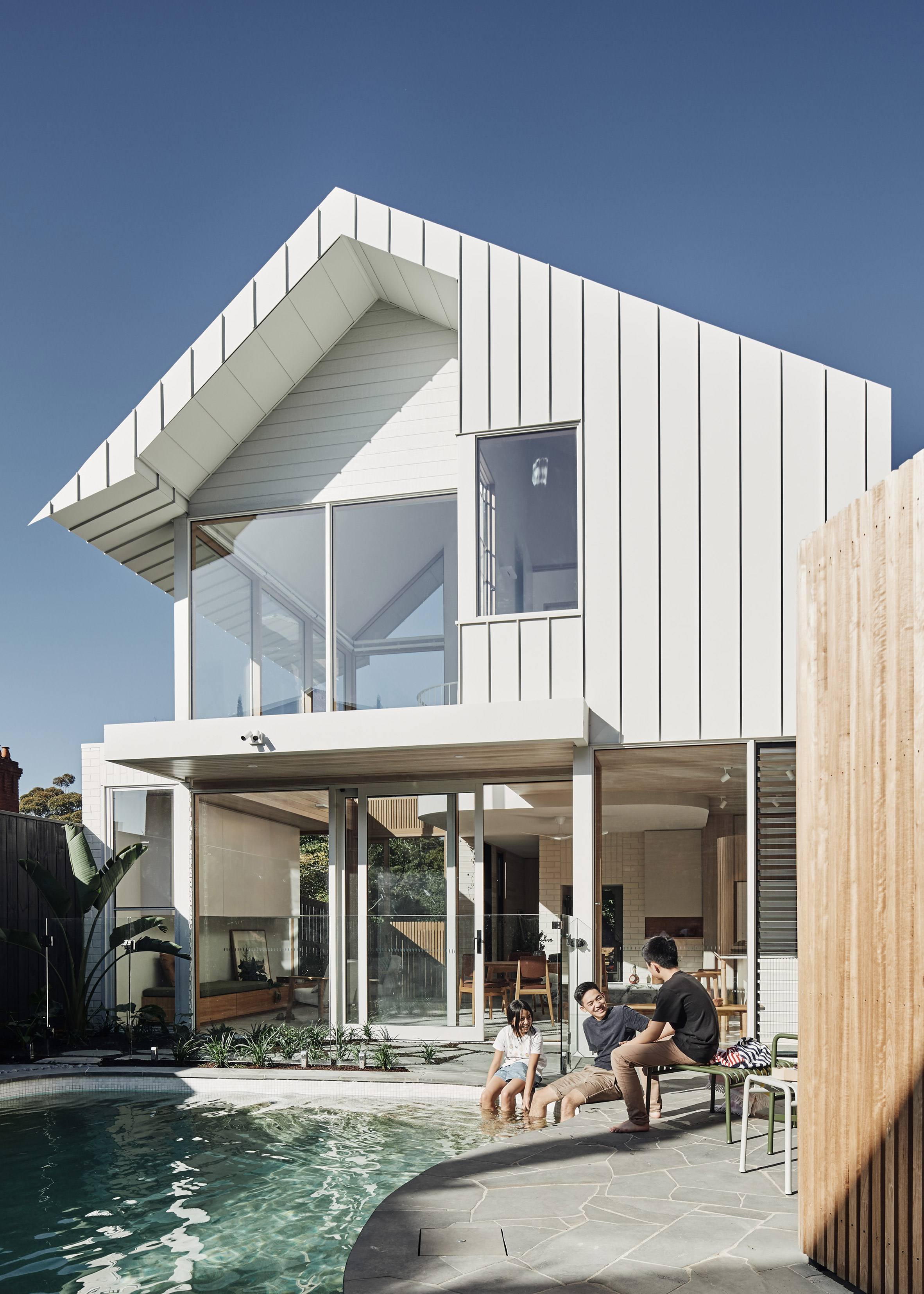 A low-ceilinged extension that had been added to the property in the 1980s was also proving redundant.

“Our clients wanted to live, cook, gather, lounge, read and socialise in one sunny, externally connected space,” said Timmins + Whyte Architects, which was tasked with expanding the home. 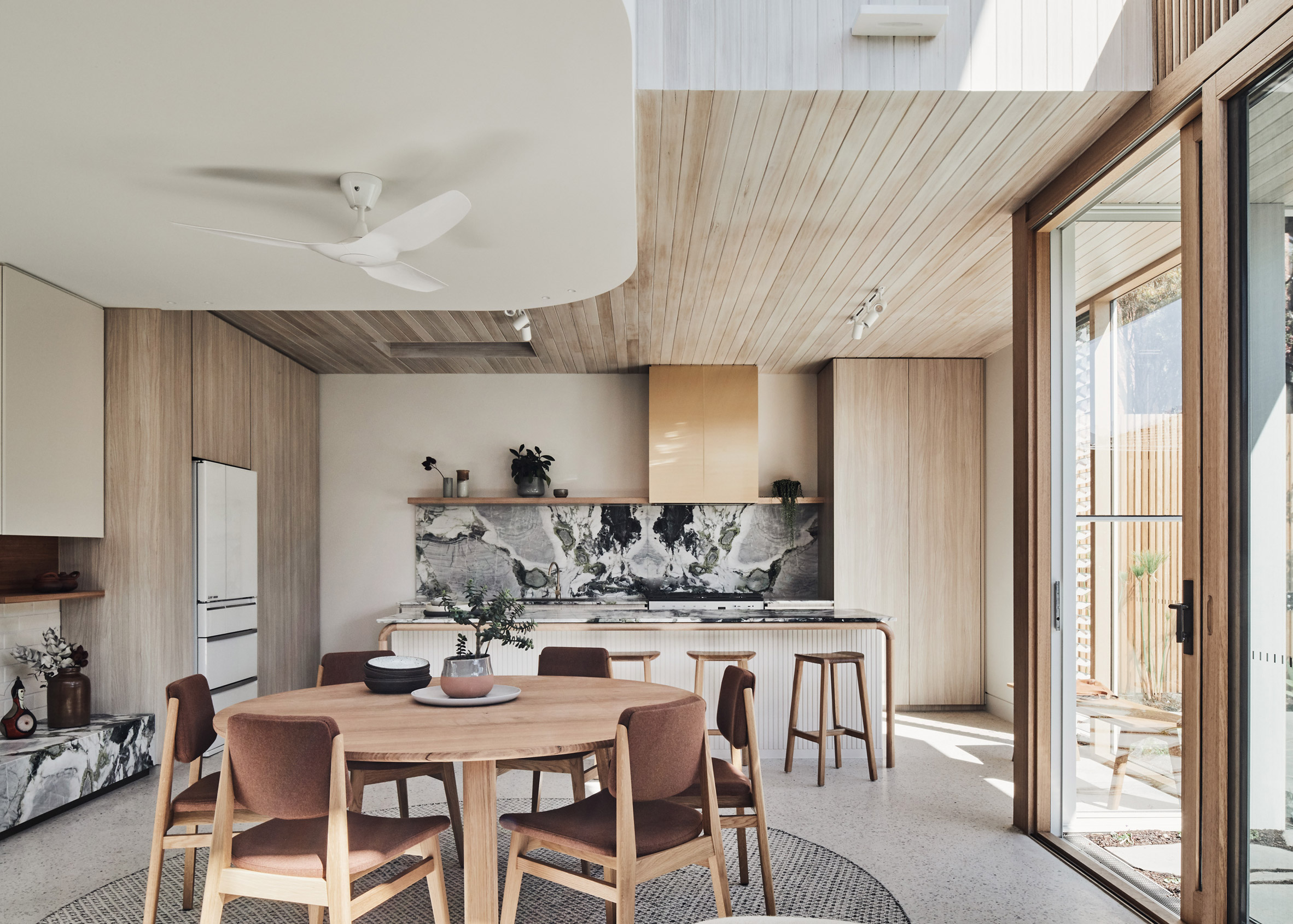 It has a glass-fronted rectilinear base and a gabled upper volume wrapped with expansive windows that cast stripes of light into the interior. They can also be seen glowing from street level as night falls.

“The extension has been designed to play with light, it allows the space to bathe in it and controls it,” explained the practice. 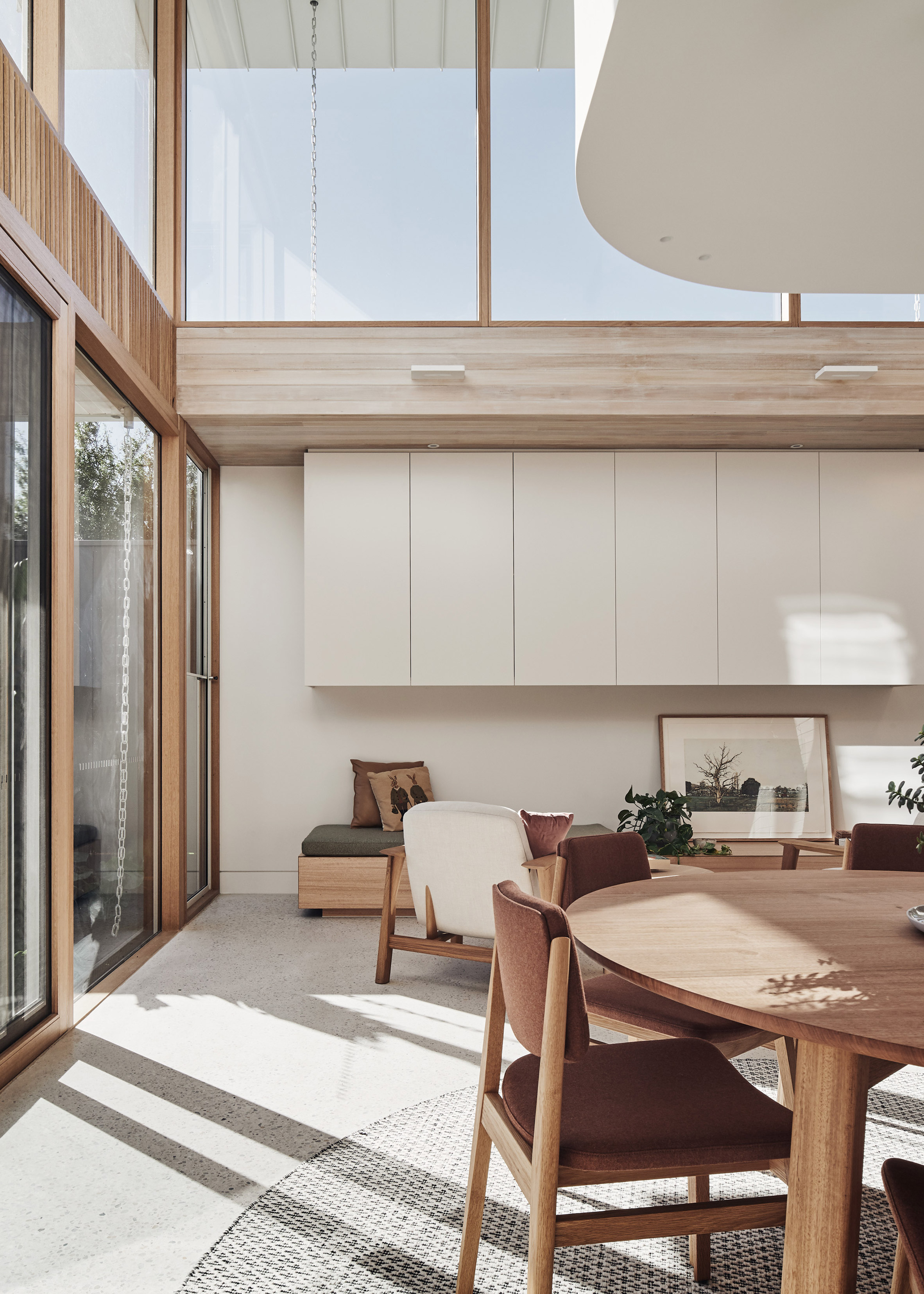 The luminous quality of the new extension is what lent the project its name of Lantern House.

It’s also meant to be a subtle reference to Japanese tōrō’s – traditional lanterns made from stone, wood or metal that would be used to illuminate the pathways of Buddhist temples.

“Our client’s husband is Japanese and the garden landscape has stepping stones that create a path from the courtyard to the house, and back out to the rear yard and pool – so it seemed fitting,” the practice’s co-director, Sally Timmins, told Dezeen. 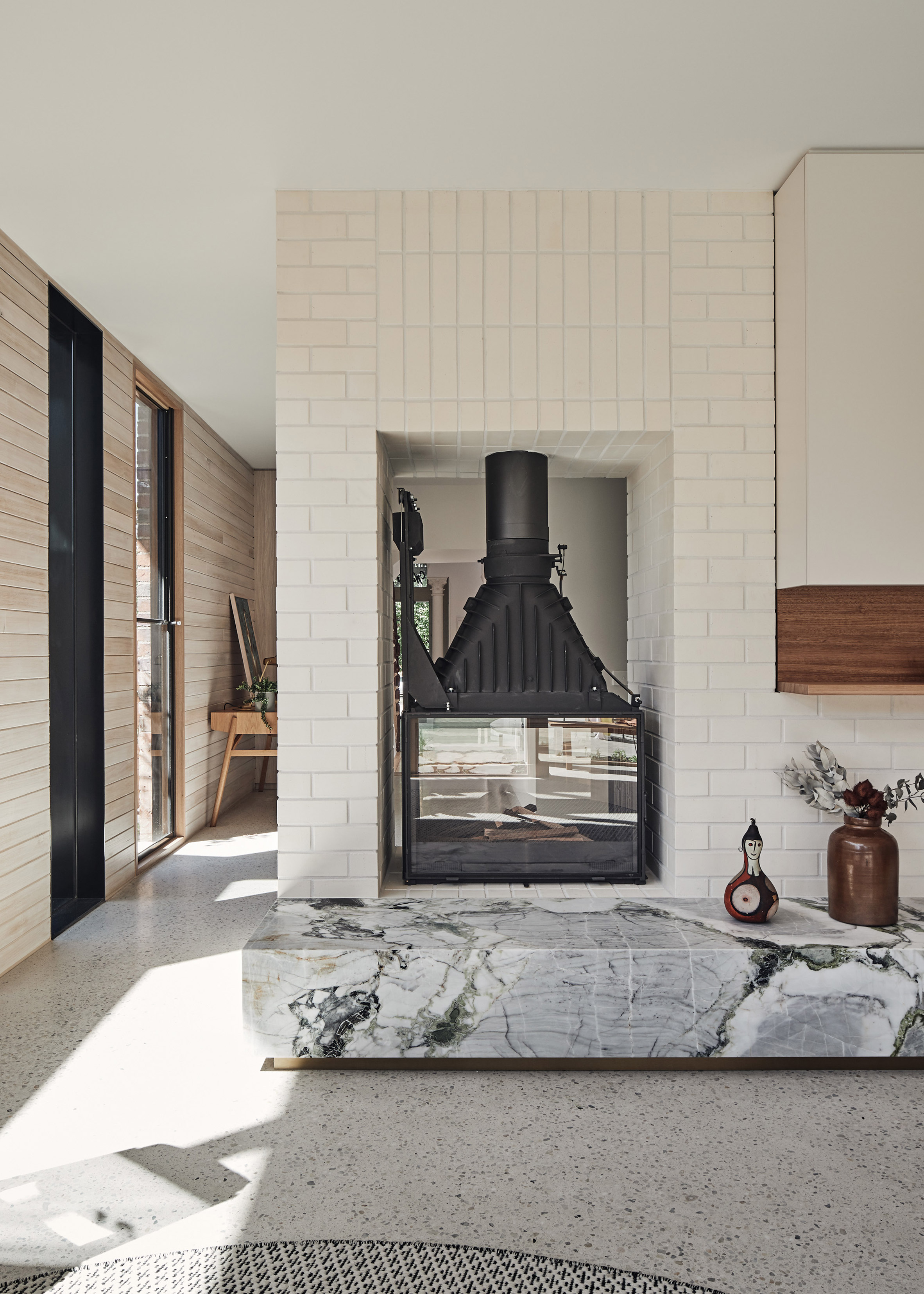 Designed to have a calming, “unfussy” ambience, the inside of the extension has been decked out with an array of neutral hues and materials.

The ground-level kitchen suite is crafted from Tasmanian oak wood and has a soft-gold extractor hood above the stove. 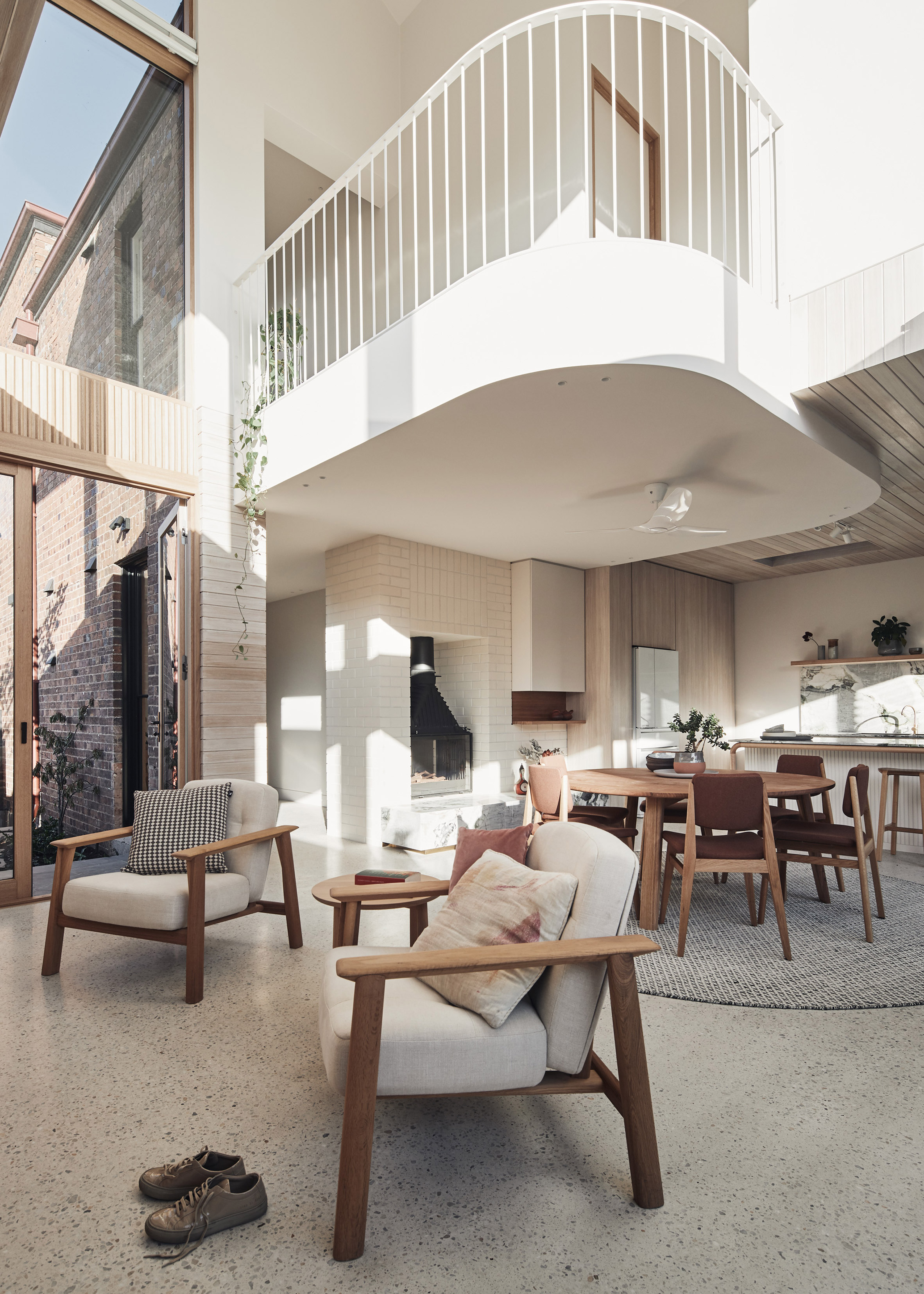 A touch of colour is provided by the stone splashback and countertop, which has murky green and dark-blue veins running through it.

Adjacently lies a timber dining table, and a couple of cream-coloured lounge chairs.

Flecked concrete has been applied to the floors, while pale bricks have been used to form a short partition wall – it’s punctuated with a large niche that accommodates a double-sided fireplace. 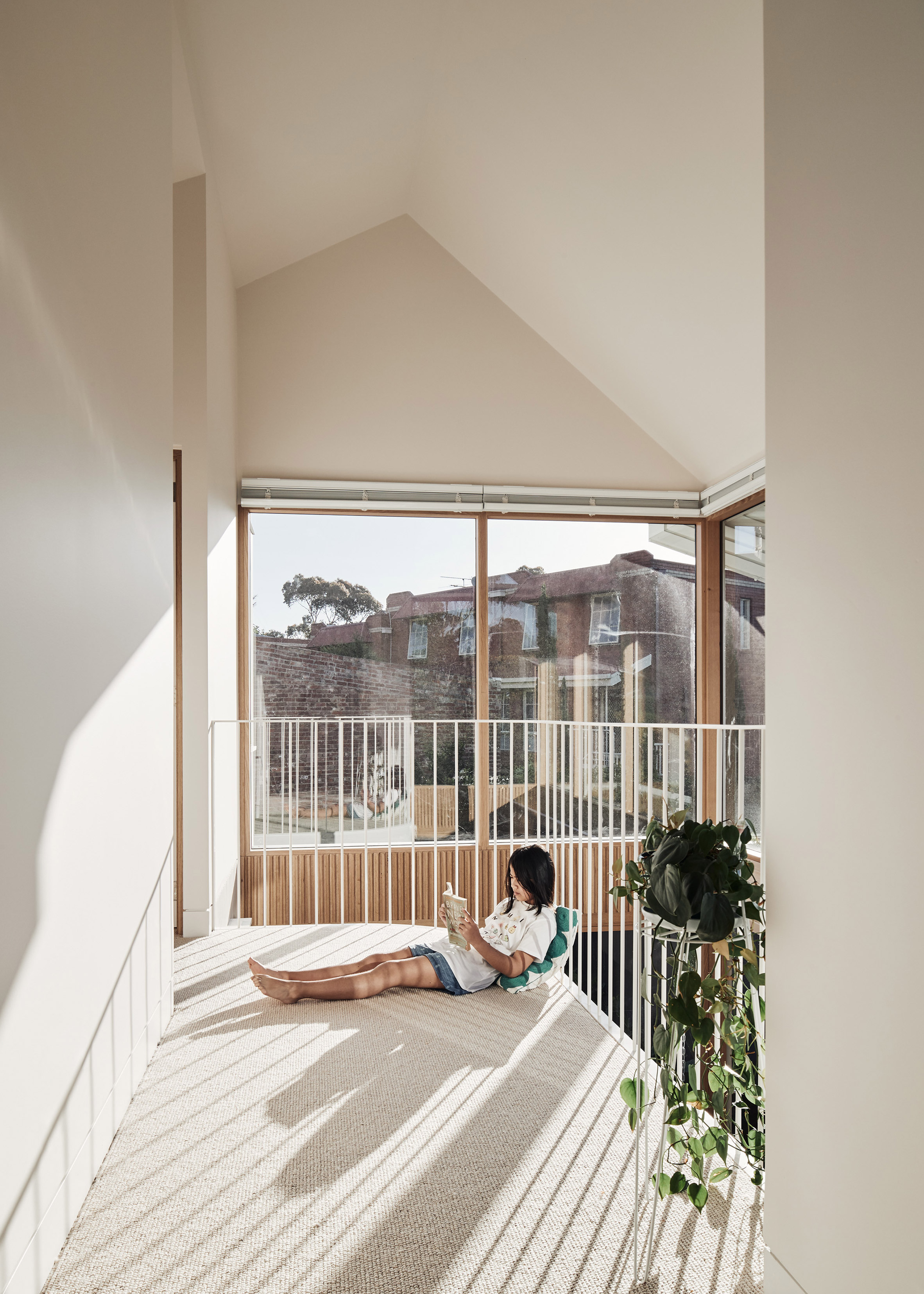 Part of the timber-lined ceiling has been cut away to create a soaring void that offers views of the extension’s roof and mezzanine level, which contains two bedrooms and an additional bathroom.

The void was also an attempt by the studio to create an indoor feature that matches the grandiose nature of the home’s front facade, which is covered by ornate ironwork. 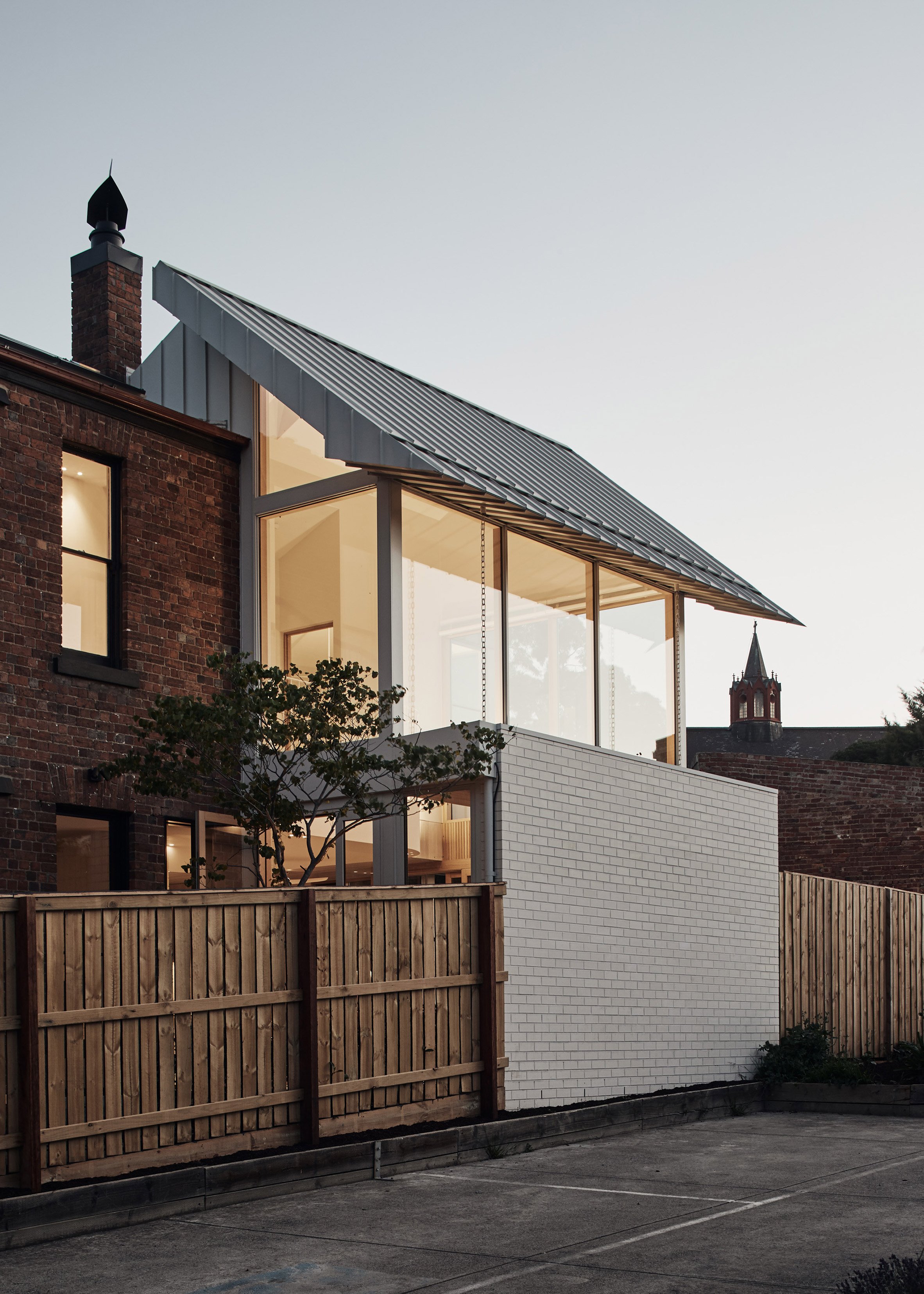 Timmins + Whyte is based in Collingwood, an inner suburb of Melbourne.

The city is host to a number of striking home extensions – other examples include one by architect Matt Gibson, which is shielded by metal-mesh curtains, and another by Austin Maynard Architects, which is topped by a zigzag roof.

Photography is by Peter Bennetts.