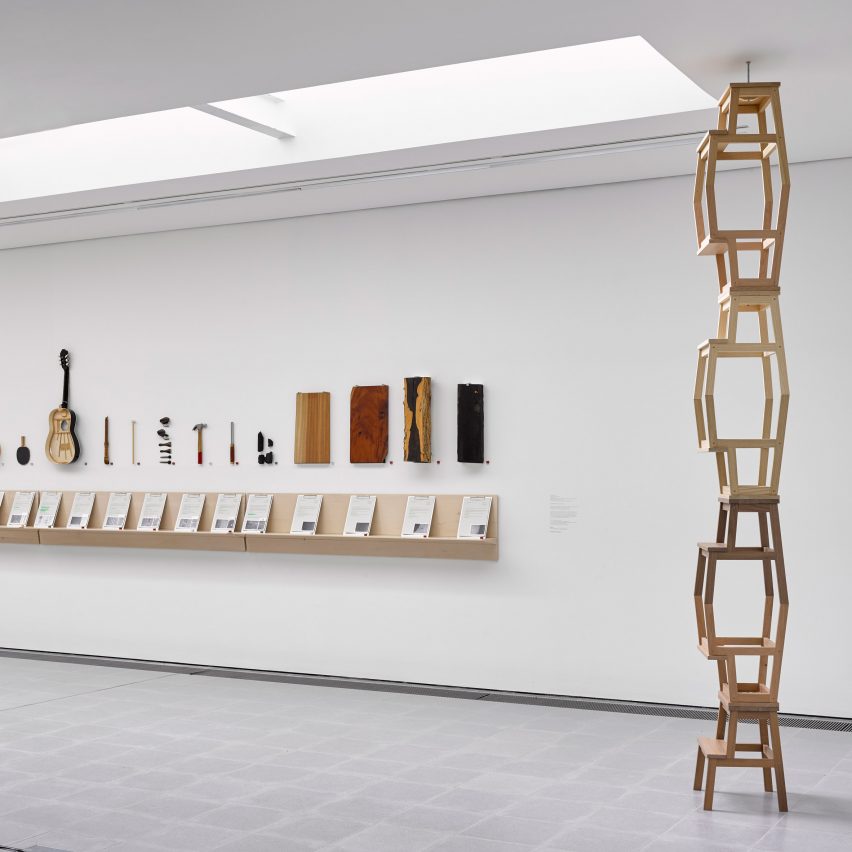 Formafantasma has curated a research-focused exhibition at the Serpentine Sackler Gallery in London, UK, which aims to unravel the global impact of the forestry industry.

Entitled Cambio, the show sheds light on the legality and environmental impact of the extraction, production and distribution of wood to make products around the world.

It is the third design exhibition hosted by the Serpentine Sackler Gallery in its history, though unconventionally, its focus is on process and ecological concerns rather than on finished objects.

Formafantasma’s intention is to demonstrate that the use of timber is not always as sustainable as it seems, and invite designers to question their role in creating a more sustainable future. 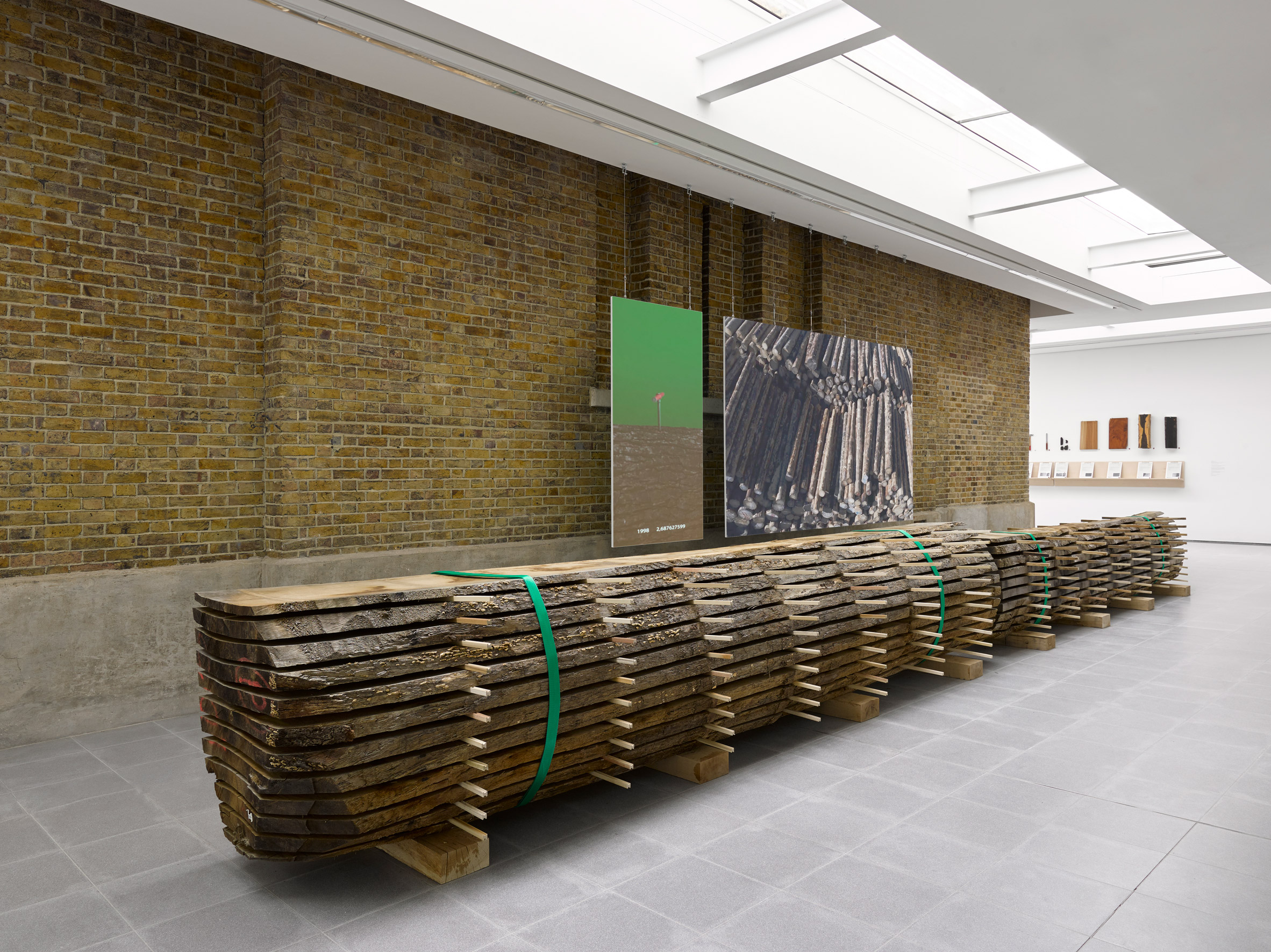 “The entire aim for Formafantasma and for us was to give space to the aspect of design that is not necessarily producing finished objects,” Serpentine curator Rebecca Lewin told Dezeen.

“It is a space for experimentation and the presentation of research.” 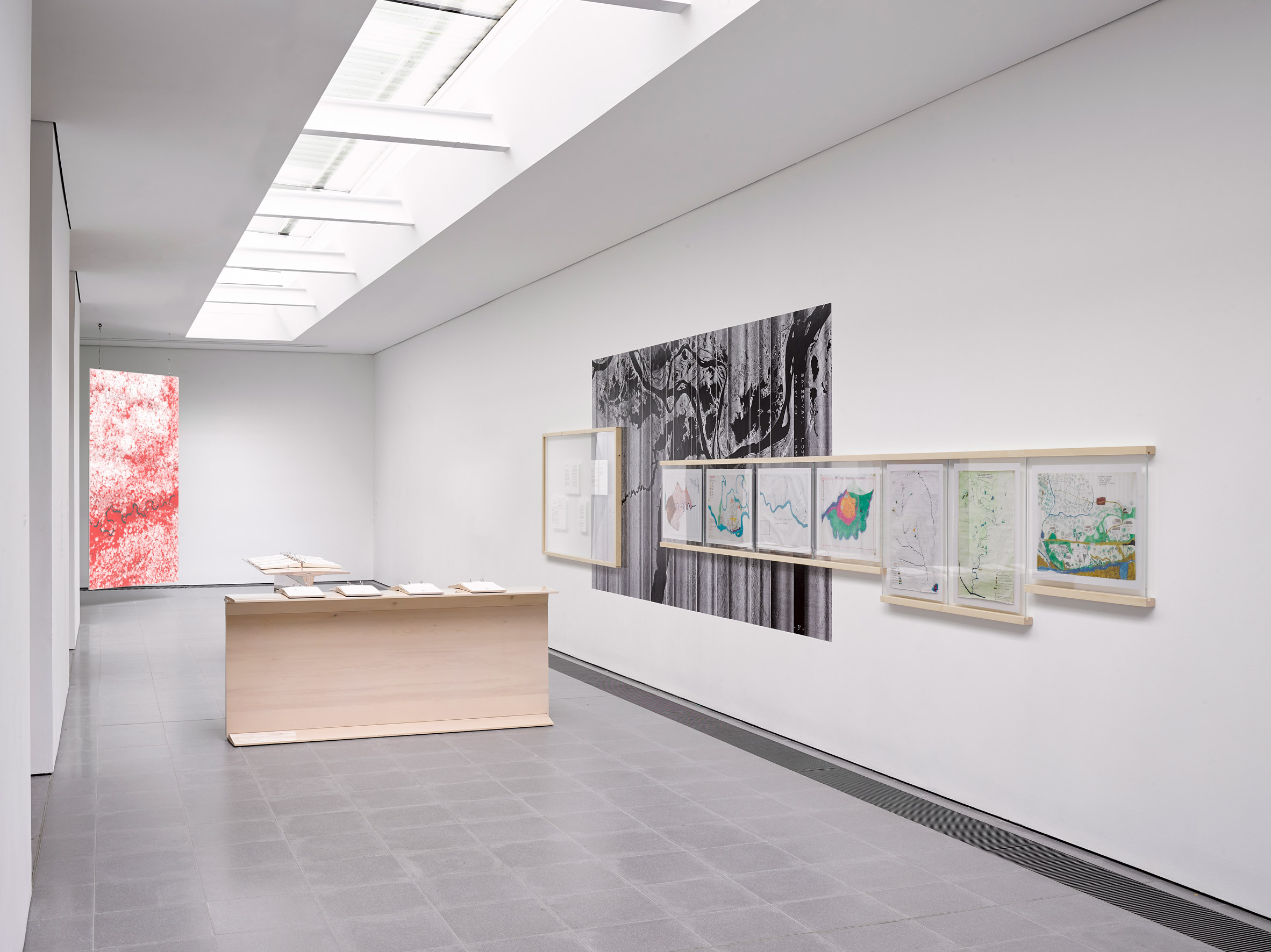 The Italian duo Andrea Trimarchi and Simone Farresin’s curated Cambio off the back of a number of conversations and collaborations with different practitioners and experts from the timber industry.

Timber was chosen as its focus because it is one of the most globally abundant materials in design and architecture. However, the pair believe many of its users are unaware that wood is often unethically sourced from fragile ecosystems.

Its title, Cambio, makes reference to the cambium membrane of a tree – a layer responsible for producing wood on the inside of a trunk, and bark on its exterior.

The exhibition’s layout also nods to the term, following a concentric layout around two rooms at its centre. 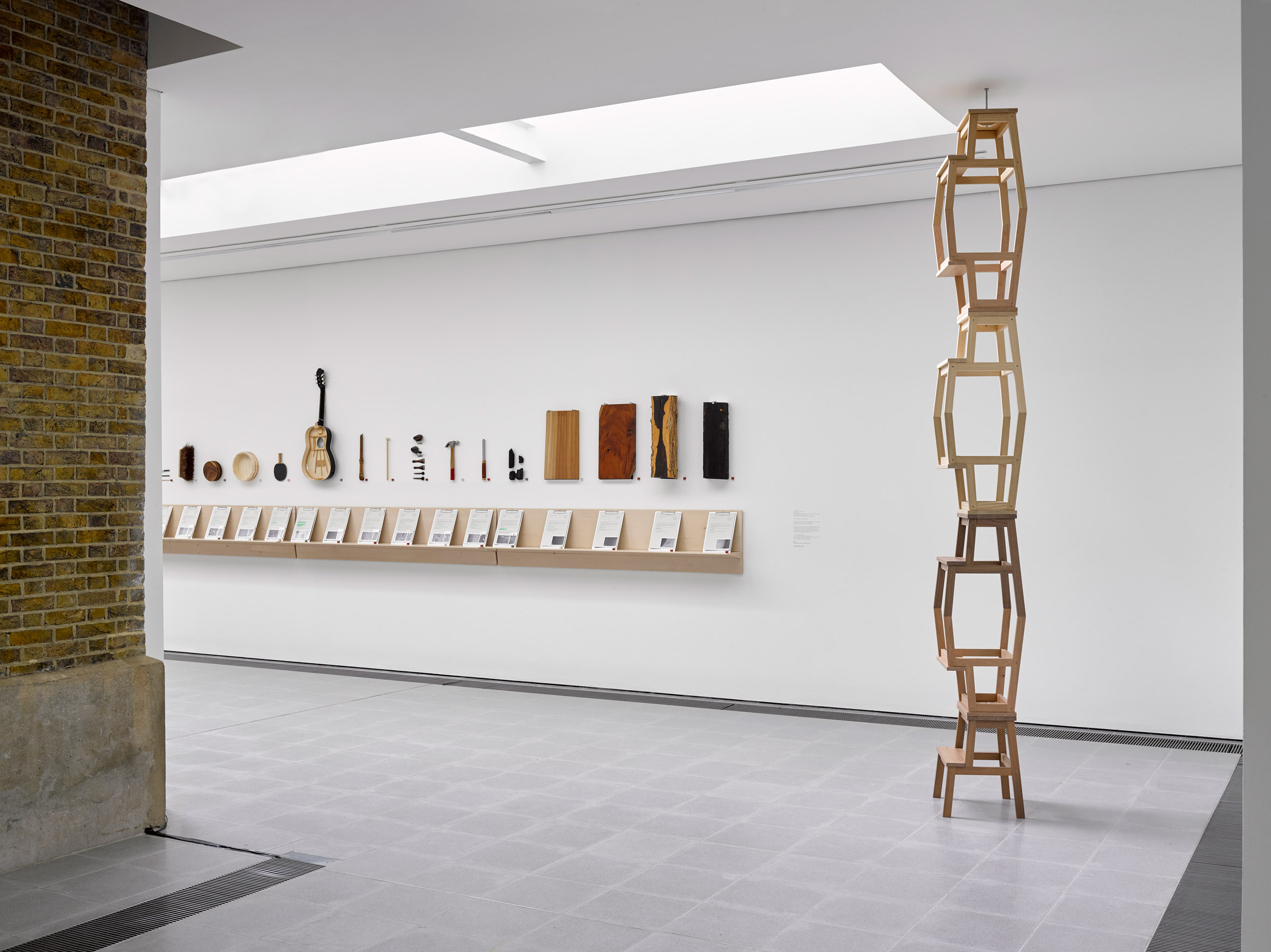 A highlight of the exhibition is a section dedicated to the “forensic analysis” of typical wooden products sold in the UK each year, which examines whether or not they are legally and ethically sourced.

This features a tower-like installation made up IKEA Bekväm stool replicas, which the studio crafted from seven different species of tree such as cherry and chestnut. 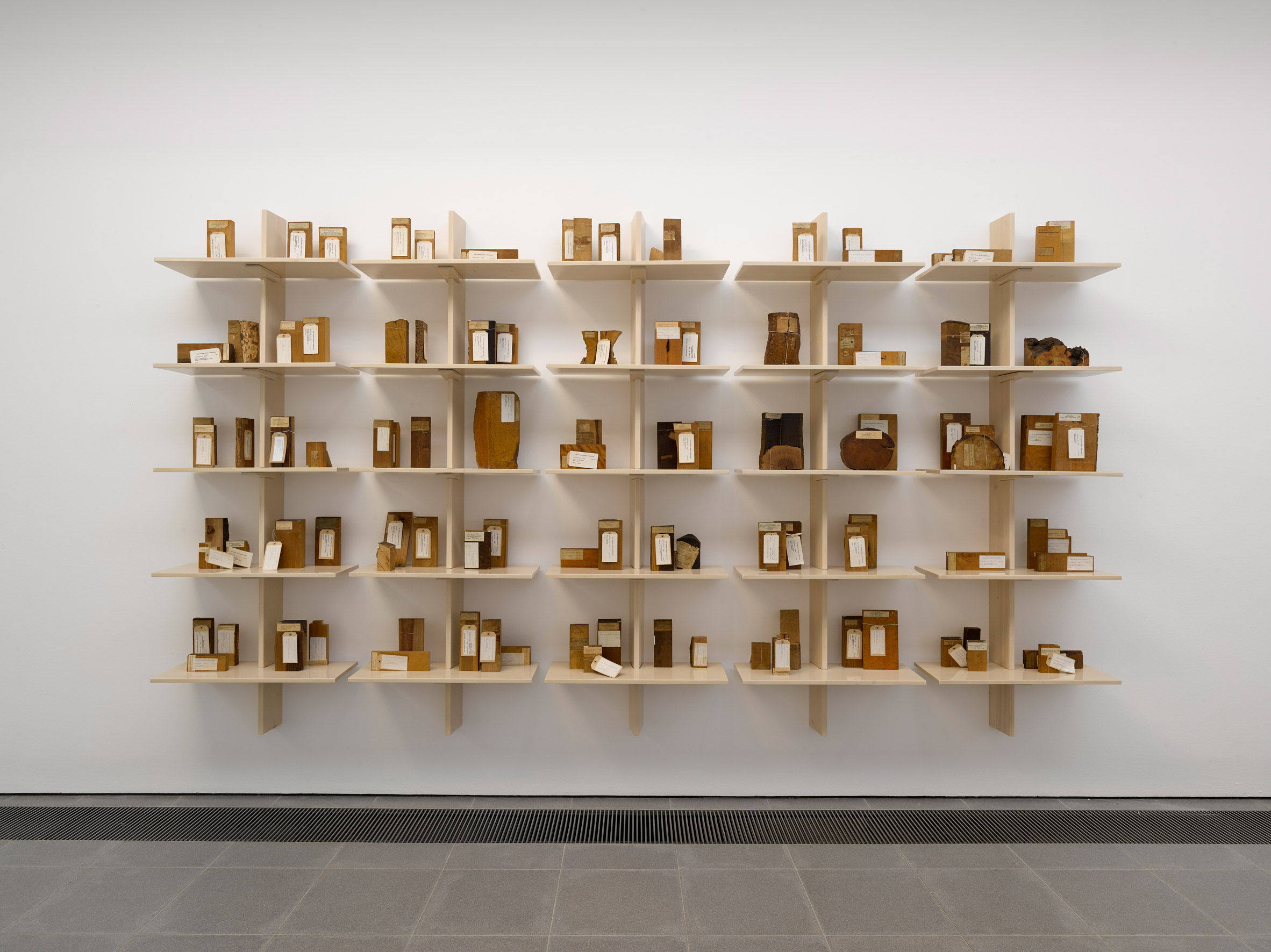 Formafantasman has stacked the stools according to how long the trees, used to make them, were grown before logging. This, therefore, orders them by how much carbon dioxide they would have captured in the process.

The aim is to inform visitors that for a wooden product to be sustainable, its useful life should be at least as long as the time that it took for the tree to grow. “It’s displayed in such a way that the lower stool is the one that had an ideal logging time of 60 years. Generally the industry cut them much earlier stage,” Farresin told Dezeen.

“Basically what we’re saying with the installation is that ideally each object should exceeds the life of a tree in order to create a coherent loop between the carbon dioxide intake and it’s emission once the object is discarded.”

According to Trimarchi, “the more educational part of the exhibition” is at its heart, where two seats are positioned in front of two rolling films.

Produced by Formafantasma, these videos offer a “visual essay” of the timber industry, created using the findings of their interviews with wood specialists. 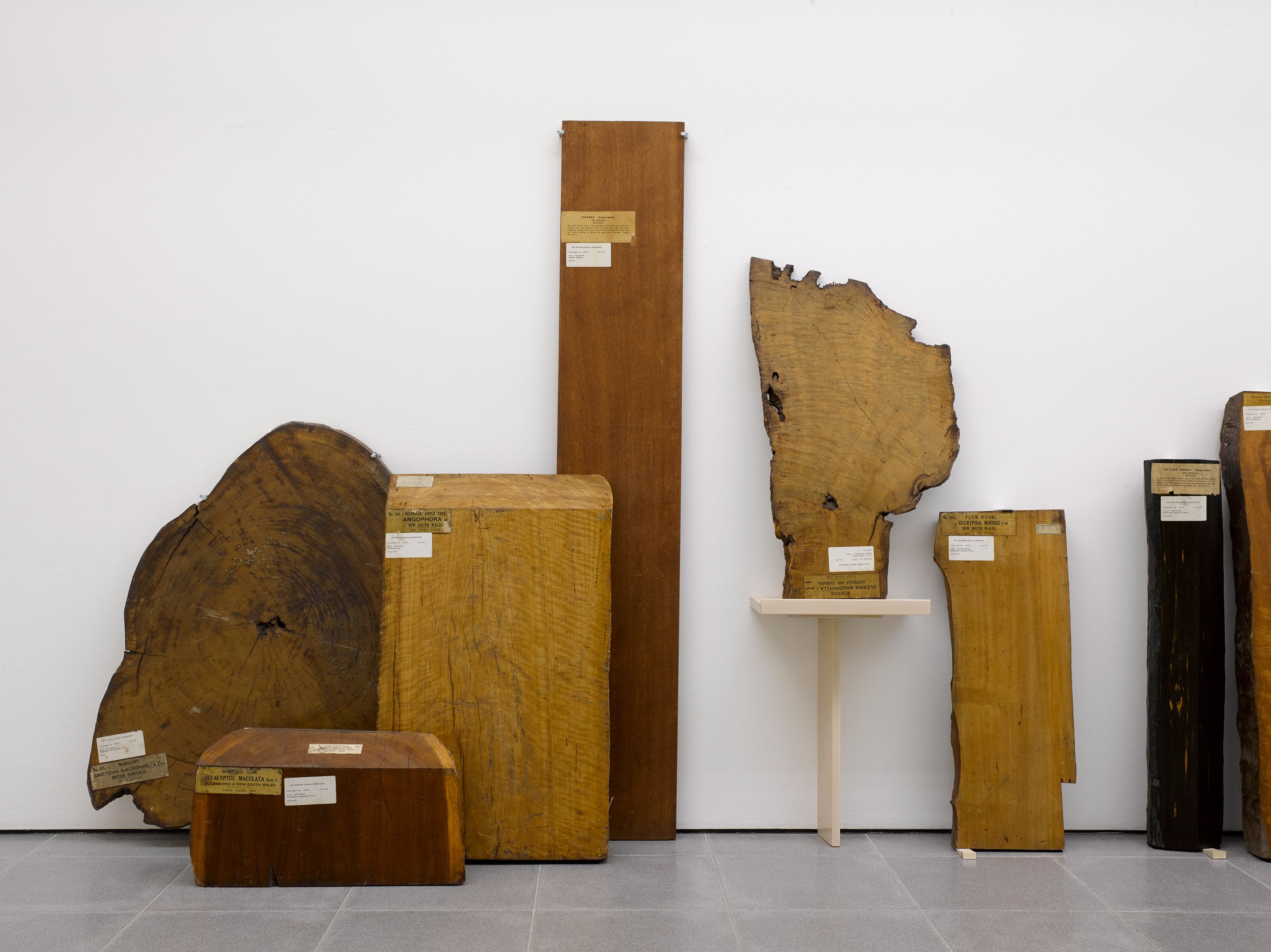 Aptly, all the shelving used throughout the exhibition was crafted by Formafantasma from a single pine tree salvaged from Val di Fiemme – a forest in northern Italy that was destroyed in 2018 by a storm.

The reason is to spotlight that if it had not have used it, the tree would have been left to rot and the carbon dioxide it had stored over its growth would be released back to the atmosphere.

“The reason why it is important is this deeper is because in this one area, carbon dioxide will be released, which is not possible to handle from the system,” said Farresin.

“Of course it’s more symbolic gesture because removing one tree is basically nothing in the area, nevertheless it just a way to show that in design even the smallest decision can be a more contextual and self aware decision that goes beyond aesthetics and formal preferences.”

Cambio is now open at the Serpentine Sackler Gallery until the 17 May 2020. Visitors can also view an accompanying catalogue published by the Serpentine Galleries with Koenig Books.

Formafantasma will continue its investigation into the industry as part of Geo Design masters course it will be heading up at Design Academy Eindhoven in September.

Led by Italian design duo Trimarchi and Farresin, Formafantasma is an Amsterdam-based studio known for its product design and material investigations.

Following the exhibition’s opening, the pair spoke to Dezeen’s chief content officer Ben Hobson about the ideas behind Cambio explained why designers should endeavour to understand the provenance and impact of materials that they use.

Photography is by George Darrell.