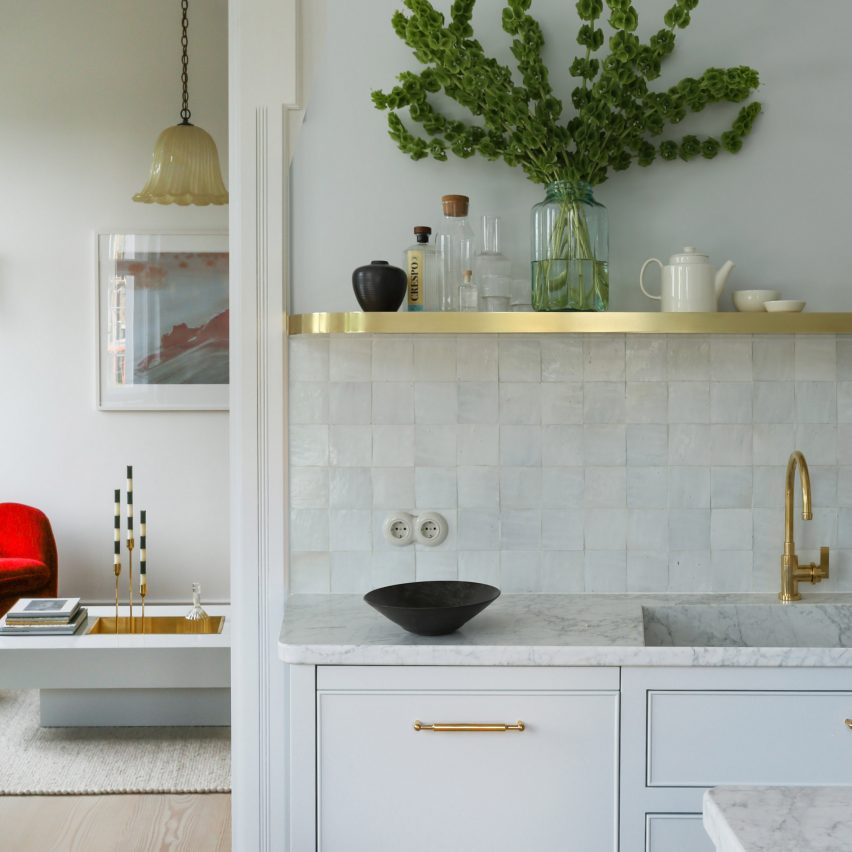 The two-bedroom Glogauer Apartment is occupied by a young family of four and is situated in the city’s Kreuzberg neighbourhood, set inside a landmarked building that dates back to 1903. 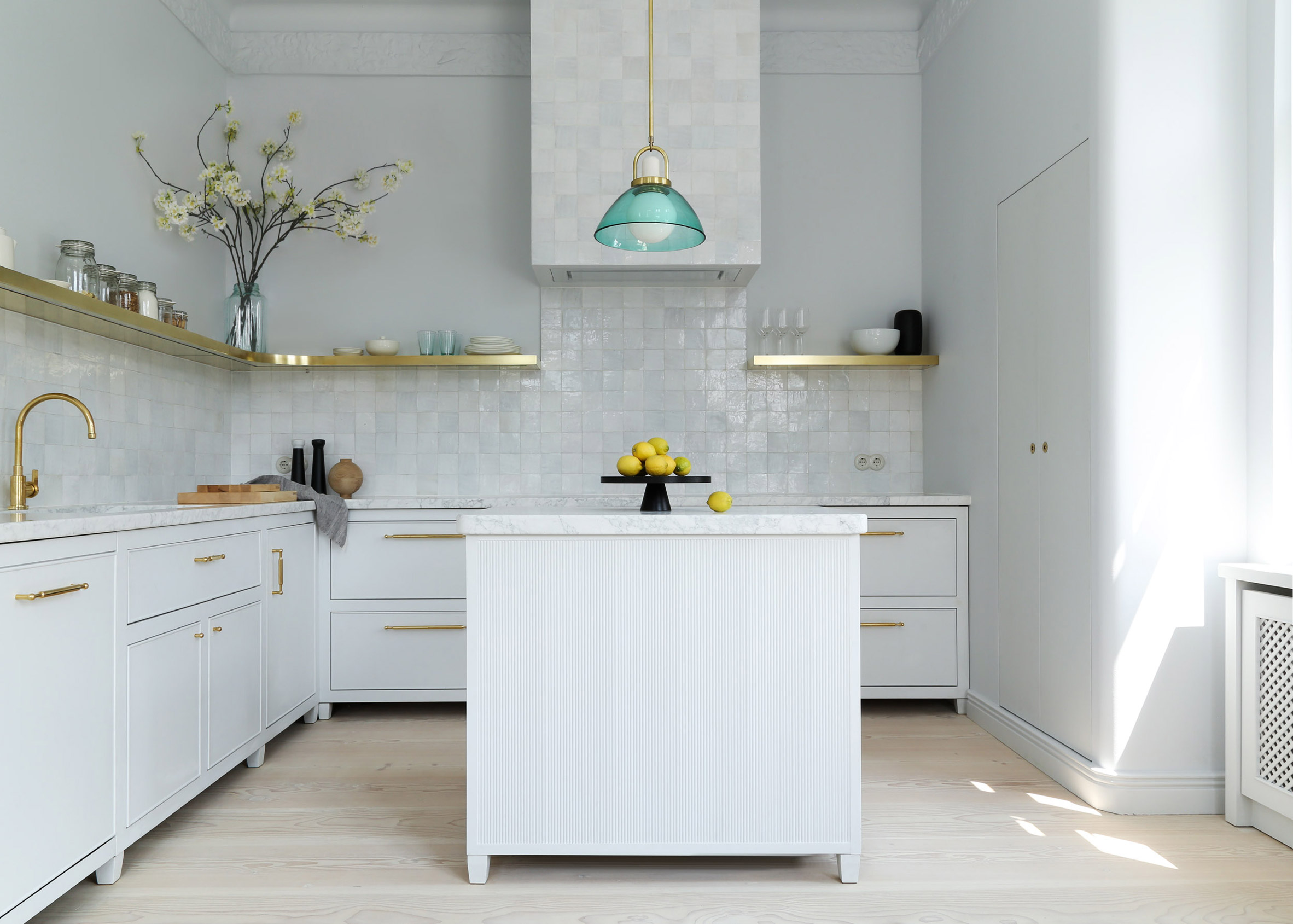 White Arrow, which is headed up by married couple Thomas and Keren Richter, began by completely gutting the apartment to create more living space for the clients.

“Our goal was to hide asymmetry and create ample discreet storage,” said the studio. 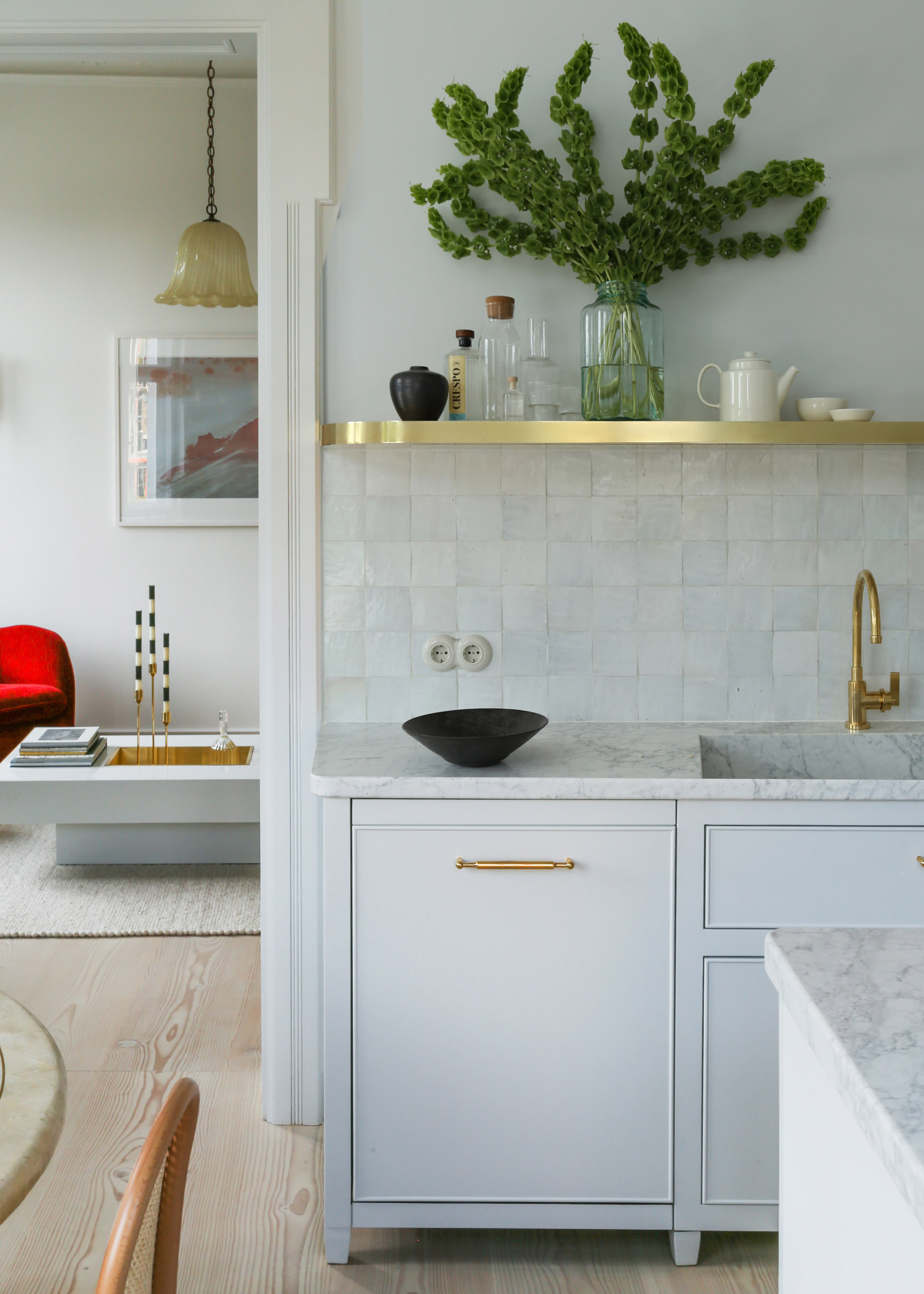 The formerly tiny, north-facing kitchen has been relocated into a bright and sunny corner of the apartment that overlooks the nearby Thielenbrucke bridge. It features an iridescent tile backsplash, white cabinetry and marble-topped breakfast island.

Certain features in the kitchen, including the curved brass shelves that display crockery and cooking ingredients, are meant to have an art deco-feel, complementing the apartment’s historic details.

The old pantry was also knocked through to create a spacious master bathroom. 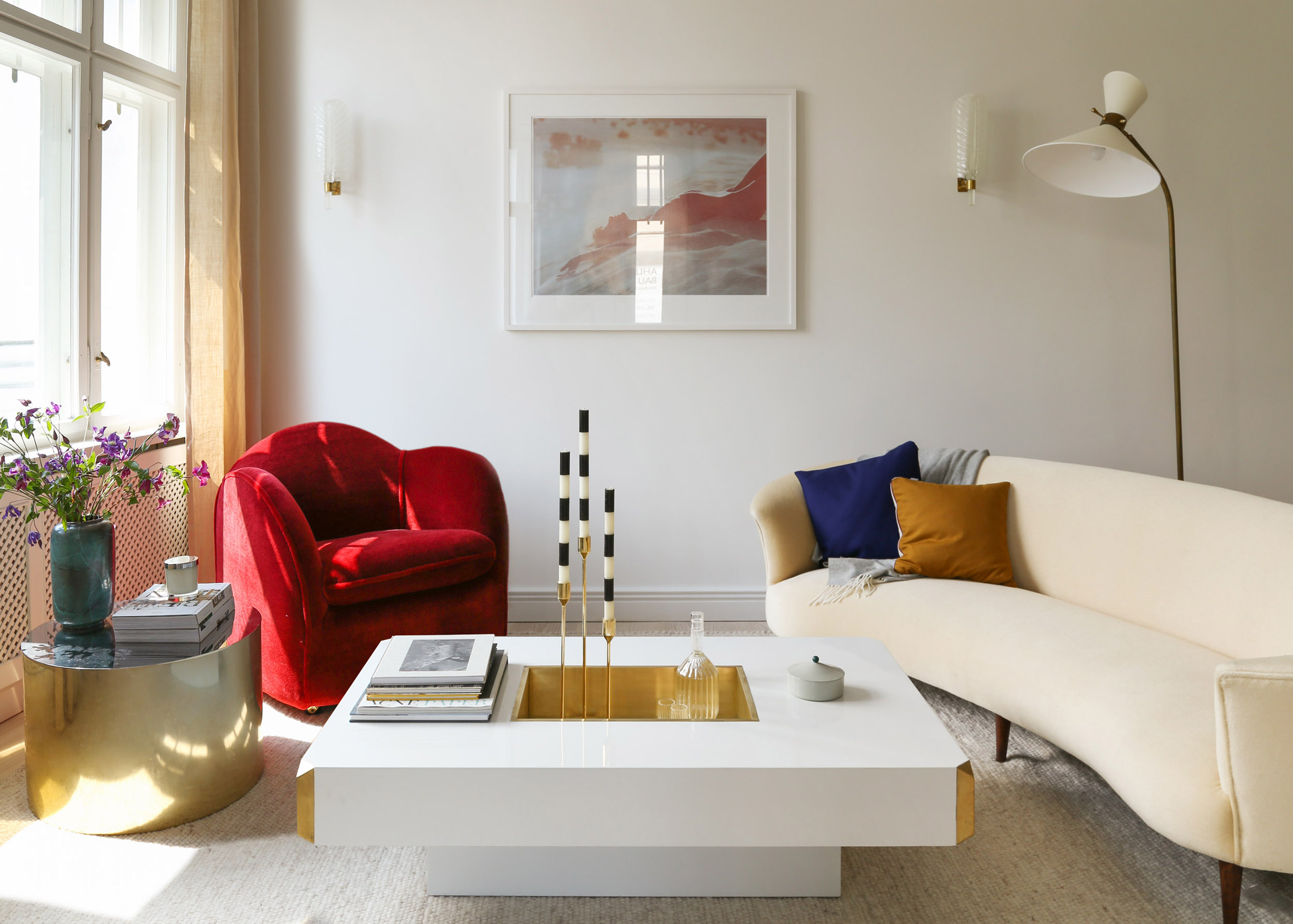 Unsightly appliances such as the washer and dryer have been hidden behind panels, and the heating and plumbing systems have also been rerouted.

The refrigerator, freezer and dishwasher are tucked away inside deep storage units that feature lacquered cupboard doors. 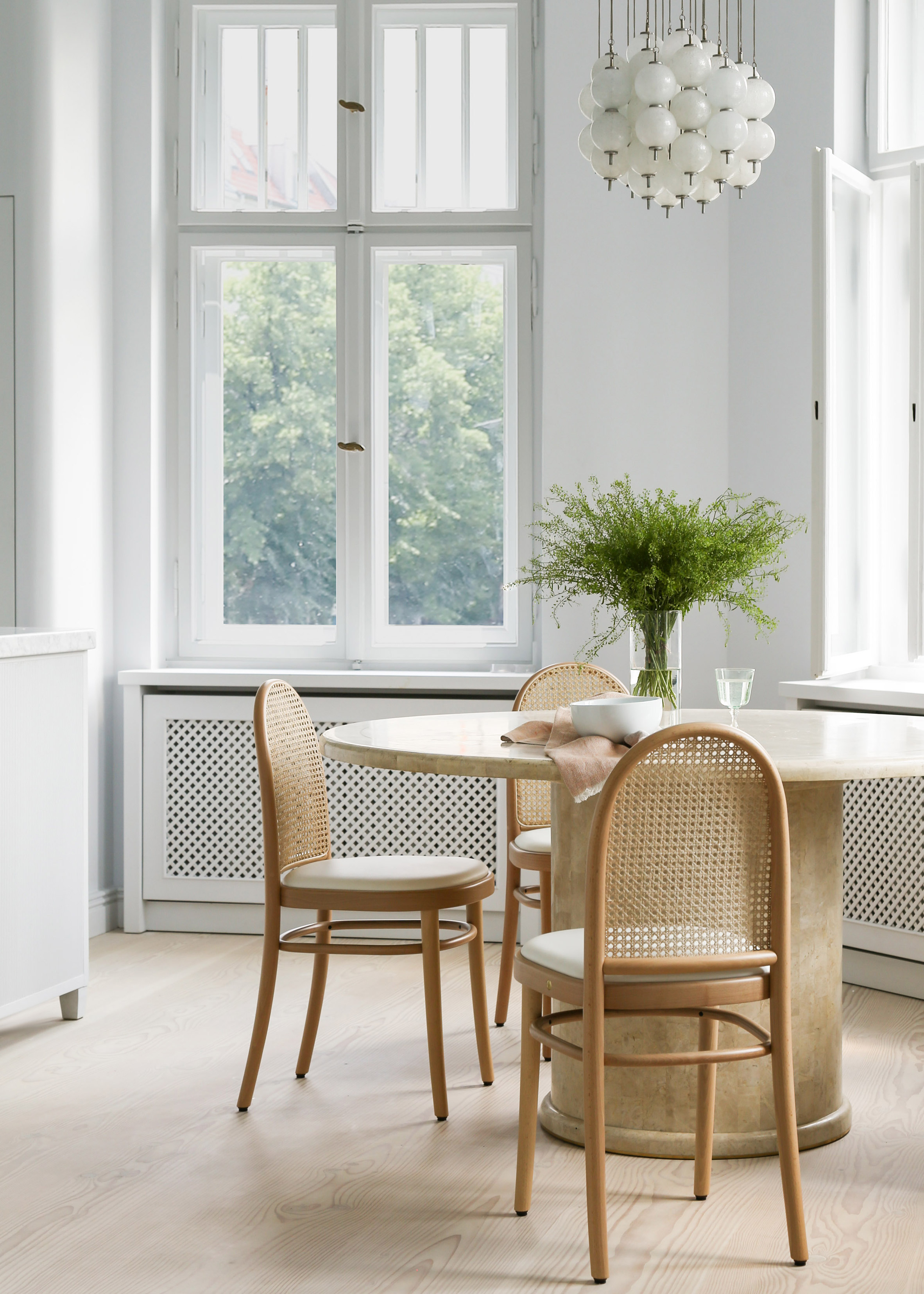 The apartment’s existing high ceilings, ornate doorframes and coving have all been preserved and worked into the new interior, which has been dotted with vintage furnishings sourced from local auction houses.

“We took inspiration in the home’s European location and sourced an eclectic mix of mid-century Italian and French lighting and furniture.”

“We love the mix of eras and influences at play and added distinctive 1970s pieces by the likes of Carlo Nason, Ingo Mauer, Greta Grossman, Karl Springer, Fontana Arte, and Willy Rizzo, with artwork by David Black and Christo.” 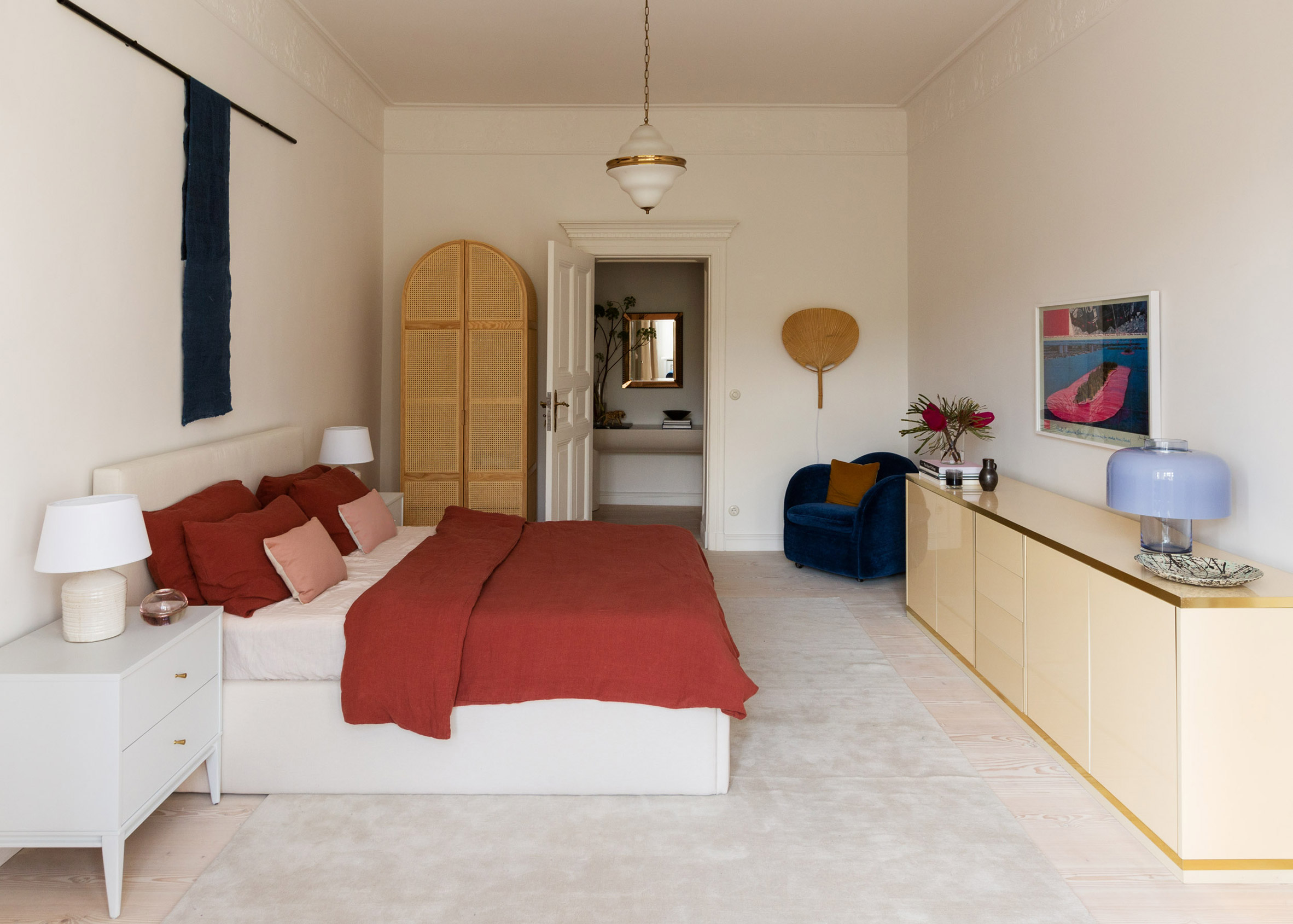 A mix of materials has been incorporated in the apartment, from the travertine table and cane dining chairs to the blue cement tiles that appear in the bathroom and velvet armchairs.

“The home was an opportunity to experiment with new vendors and fabrication techniques that are uncommon locally — we designed the bathroom and kitchen cabinetry, as well as custom metalwork – we even had marble craned in through a window,” recalled the studio. 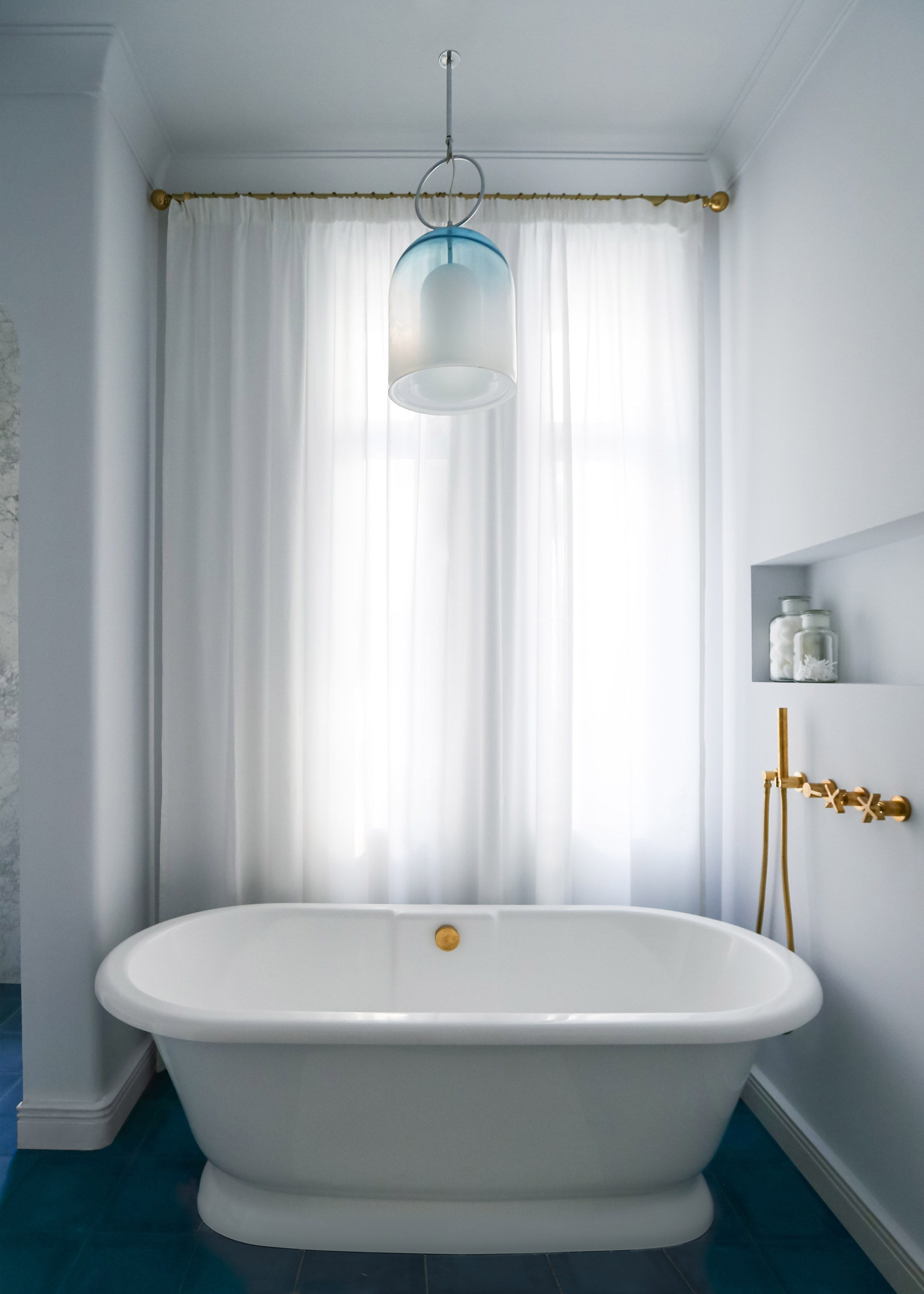 Berlin is home to a number of design-focused homes. Others include this flat by Club Marginal Architekten, which features colour-block cabinetry and a swing, and an apartment by Raum404, which is painted almost entirely white so that it can double-up as an art gallery.