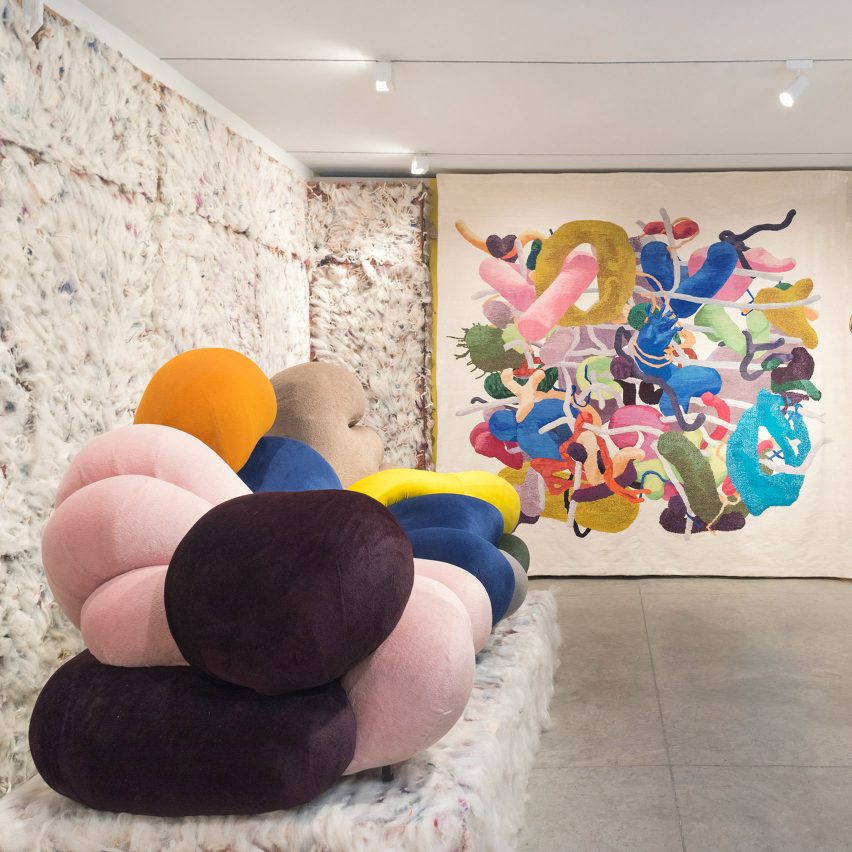 A colourful cashmere sofa, bronze chandeliers and stained-glass sculptures are among the mix of plush and sculptural objects American designer Misha Kahn is displaying at New York gallery Friedman Benda.

Marking the Brooklyn artist’s third presentation in the Chelsea gallery, Soft Bodies, Hard Spaces is intended to offer a positive reflection on the relationship between humans and machines.

“The exhibition title references Kahn’s interest in the incongruity of what he refers to as our ‘strange, soft bodies’ within the ‘hard, violent right angles’ in which we reside,” Friedman Benda added.

The gallery space is divided into two distinct areas designed to reflect the juxtaposition in the exhibition’s name. On one side the walls and display plinths are covered in soft, white yarn, while the other is coated with sand that has been glued and then covered in a dark paint with an airbrush.

Objects on show employ a range of materials and methods including metal casting, hand weaving, digital modelling and glass collaging.

Kahn used a virtual reality (VR) programme to draw the unusually shaped and curved designs by hand. He said the process allowed him to easily manipulate the creations and create unexpected outcomes.

“I always feel like if I know what it’s gonna look like from the start, it’s like why make it?” the designer added. “I’m hoping to be taken on an adventure.”

Kahn used VR to visualise the abstract configurations that make up the cashmere Pig of Sea sofa and pair of curvaceous Ammonoid Omega and Alpha chairs.

The set of shapes on the mohair tapestry, titled A Loose Understanding of the Space-Time Continuum, were also realised with the technology. Drawings were then woven by South African artist Mags Stephens.

Bronze objects, such as the All the Things I Forgot chandelier shown in a mini-model and full size version, and Reception Desk for the Unknown comprise of over 100 individual parts.

Kahn constructed a series of glass and aluminium sculptures as a visiting artist at the Corning Museum of Glass, including Storage for Light, Emotions, and Transient Thought. He conceived the fantastical objects by outlining their forms in a pit of sand.

Similar to the glassworks, Kahn has created “material collages” such as Slide to the Left and Slide to the Right. They are two towering mixes of materials that combine stainless steel, concrete, glass, fibreglass, ceramic, bamboo and wool into one object.

Soft Bodies, Hard Spaces is on display at Friedman Benda in New York until 4 April 2020.

Kahn’s previous exhibitions at Friedman Benda include a collection of sea creature sculptures made from collected trash. He also made a “rampant cast of character-objects” that were displayed at Los Angeles’ M+B Annex gallery.

Friedman Benda opened its New York City gallery in 2007. Other recent showcases there include an exploration of comfort curated by Omar Sosa and rare and limited-edition furniture designs by Italian architect and designer Gaetano Pesce.