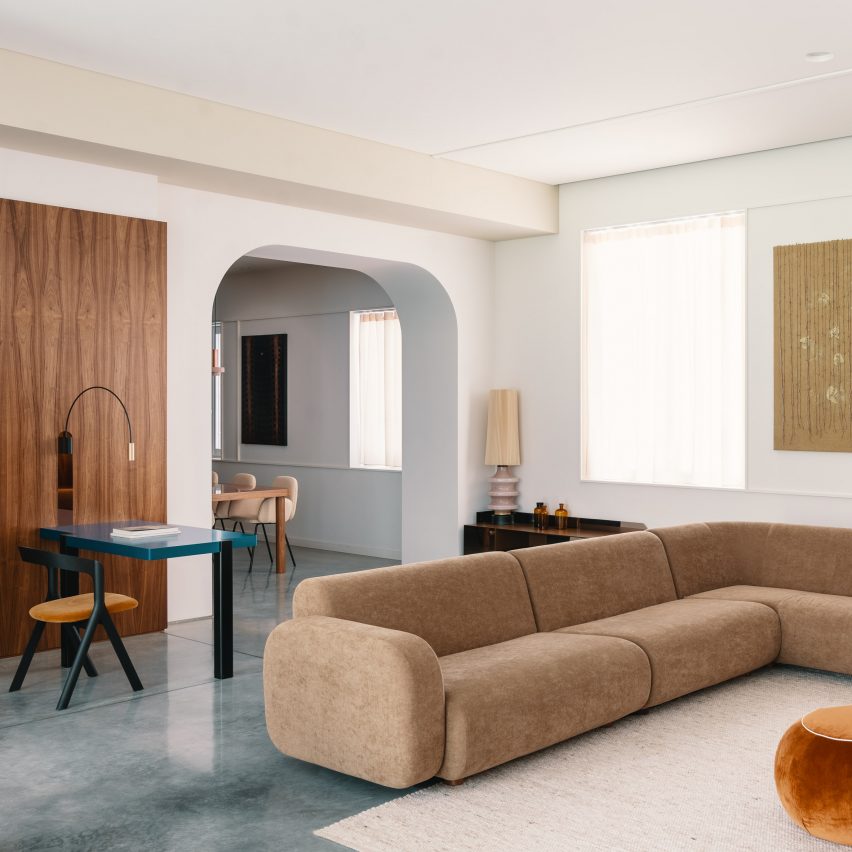 Italian architect Fabio Fantolino has created his own apartment inside a palatial 19th-century building in Turin, using pops of green and petrol-blue throughout its interior.

The Casa Mille apartment lies behind the doors of a 19th-century palazzo that once belonged to an Italian nobleman called Count Callori. 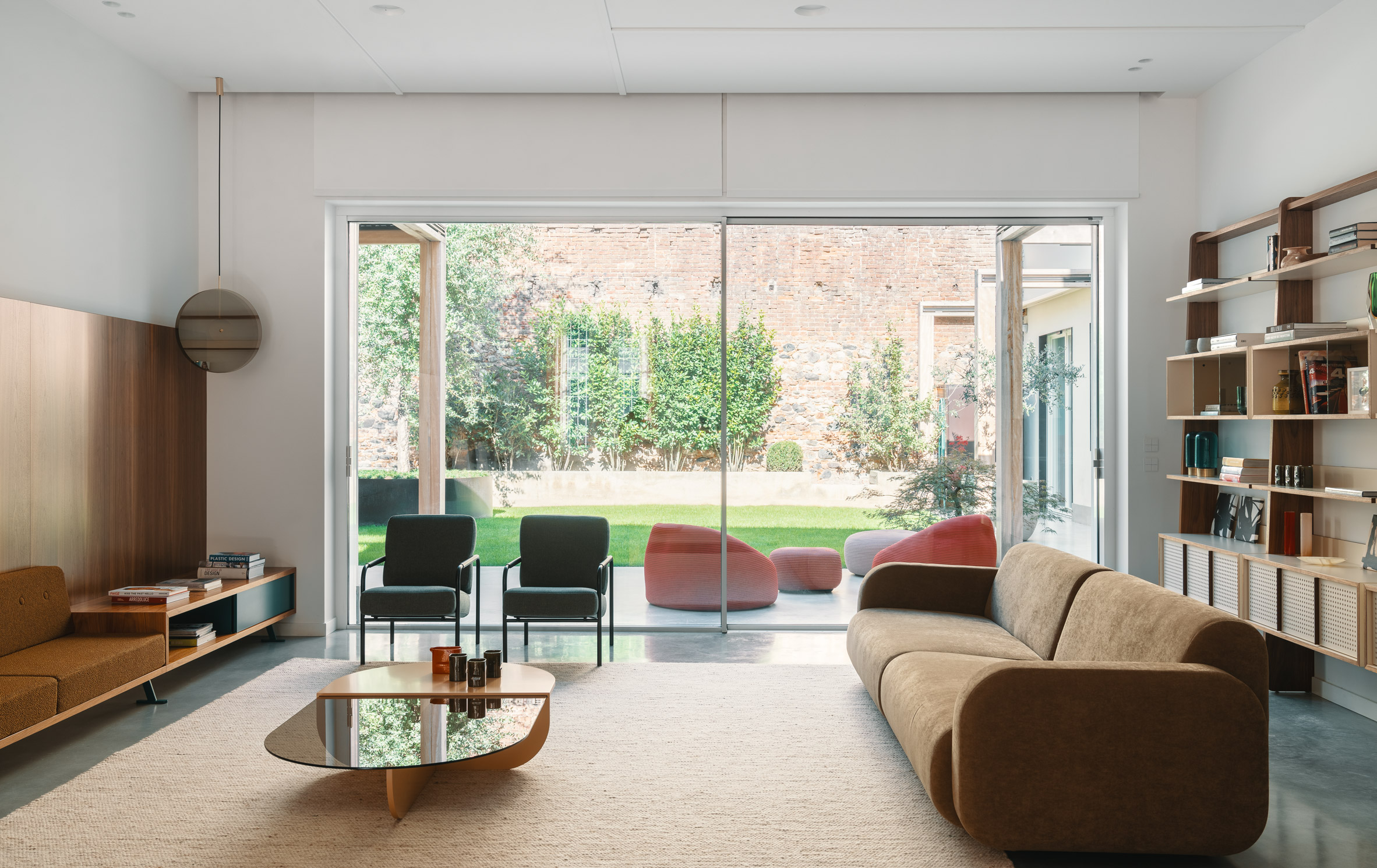 Its living spaces take over a ground-floor extension that was made to the palazzo in the 1930s to accommodate the count’s personal workshop and horse stables.

Locally based architect Fabio Fantolino completely overhauled this section of the building to create his own comfortable home. 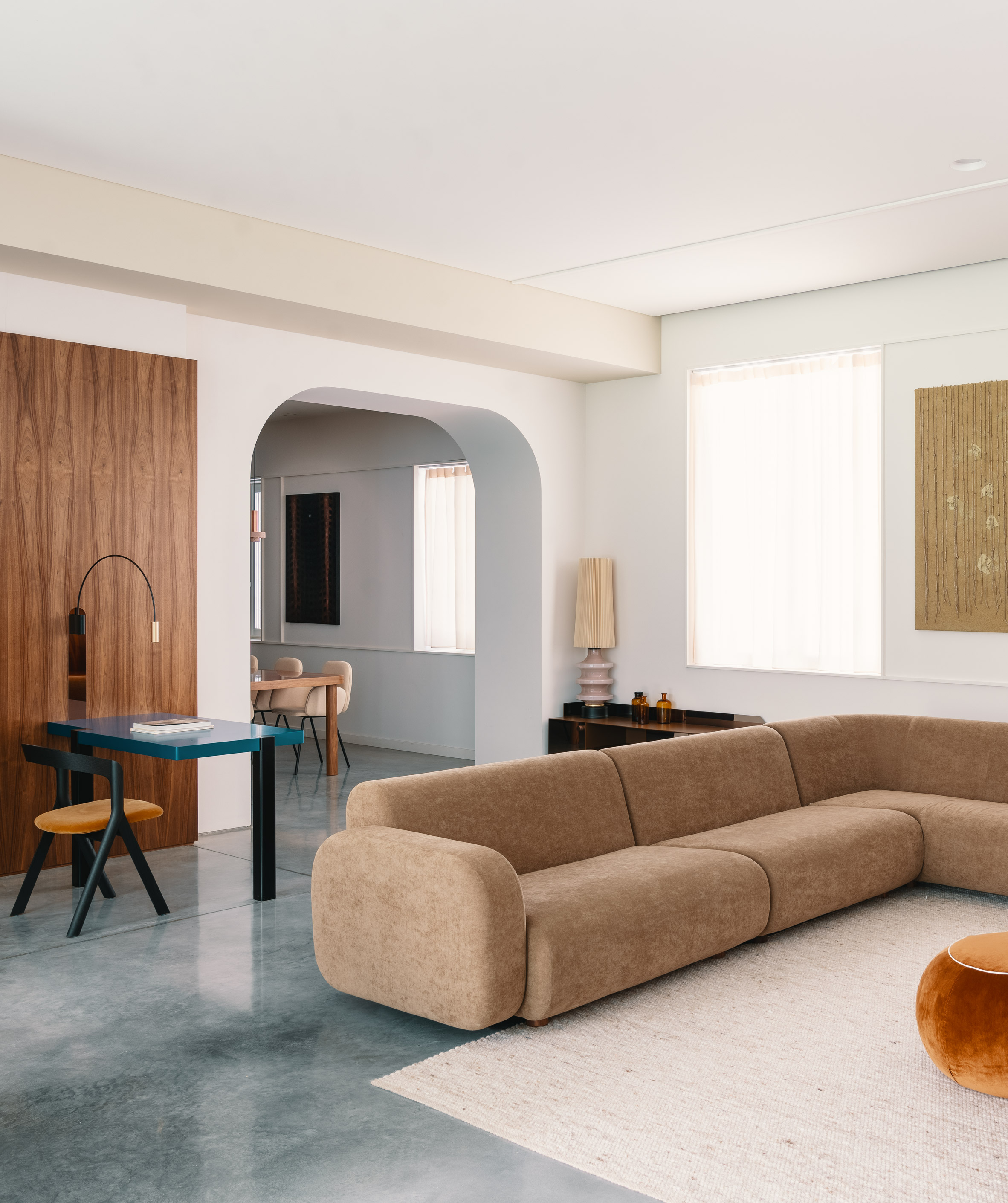 As few original features could be preserved, colour has instead been used to add character to the rooms.

Fantolino opted for natural shades that he could see in the apartment’s walled garden, and harsher hues that he felt captured the “metropolitan mood” of Turin. 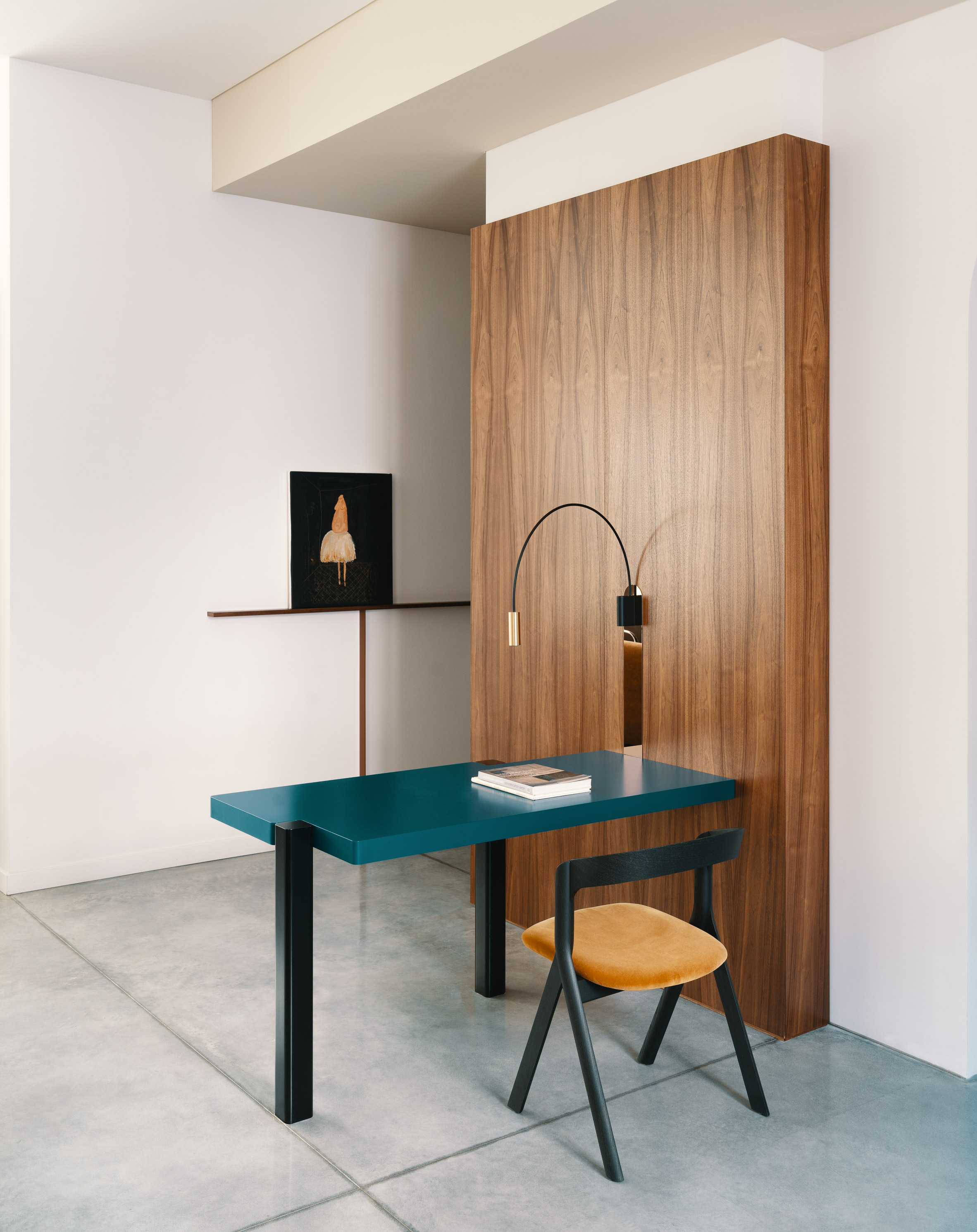 The sitting room has been dressed with a curved taupe sofa and cushioned tan-brown bench seat, both arranged around an amber-glass coffee table.

A petrol-blue writing desk has then been set against a wood-panelled wall in the corner of the room. 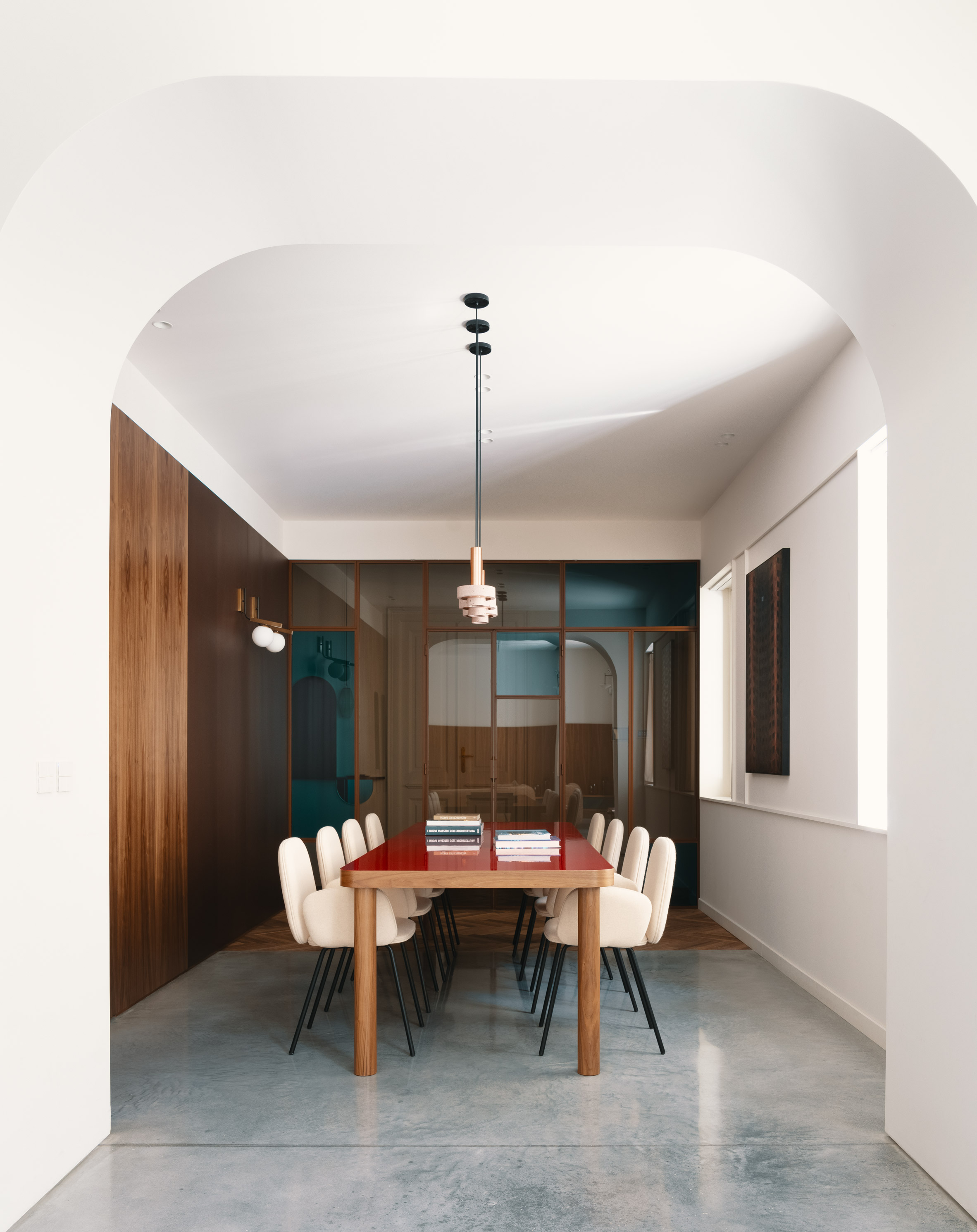 Concrete has been poured across the floors, a nod to the hard-wearing flooring that would have likely appeared in the original workshop.

“It reflects the historical soul of the house and invades the contemporary part with an industrial finish,” explained Fantolino. 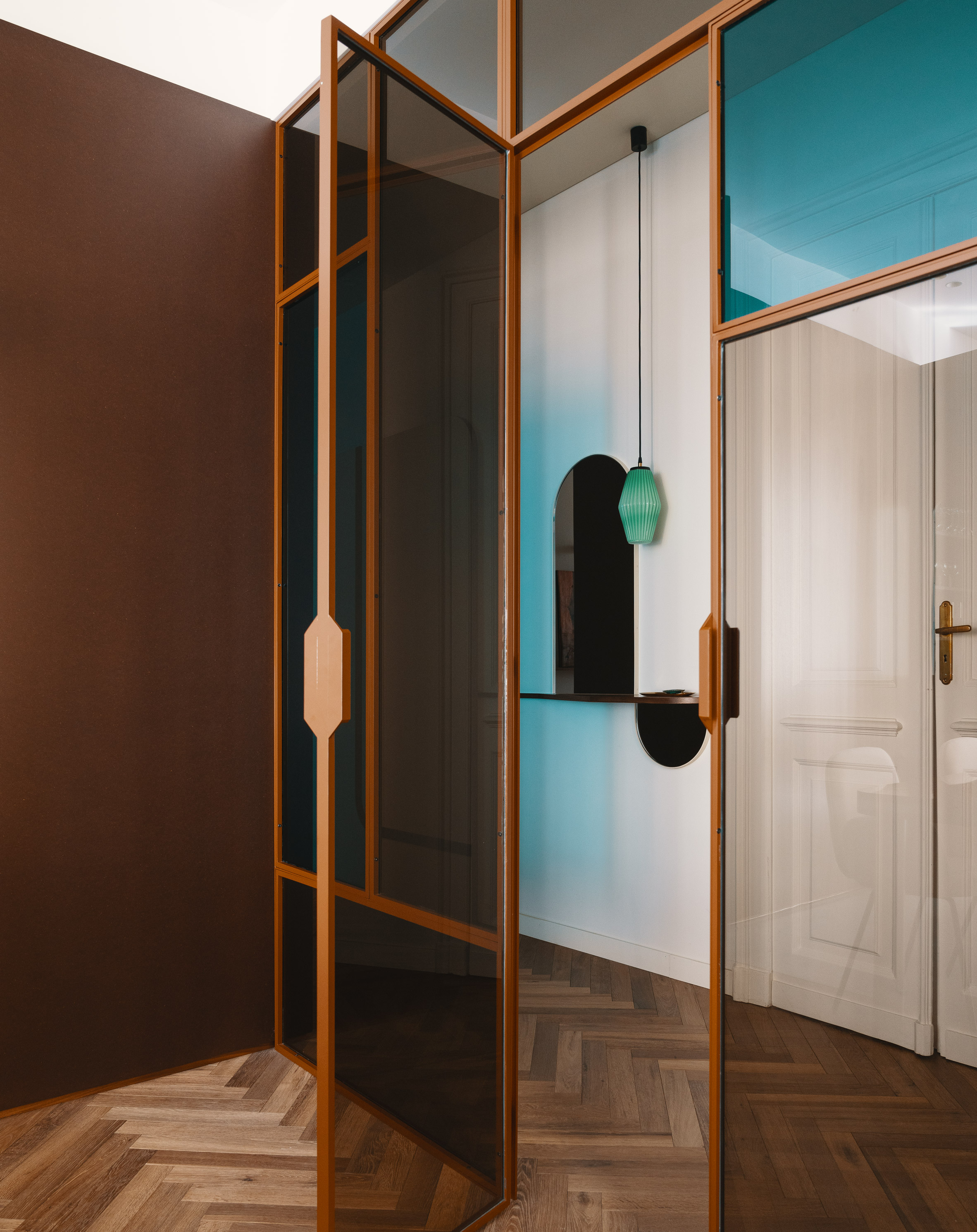 An arched opening looks through to a dining area that’s anchored by a long table with a glossy, cherry-red surfacetop.

Petrol blue appears again in the gridded partition stands at the back of the room, which comprise a mix of coloured and transparent panes of glass. 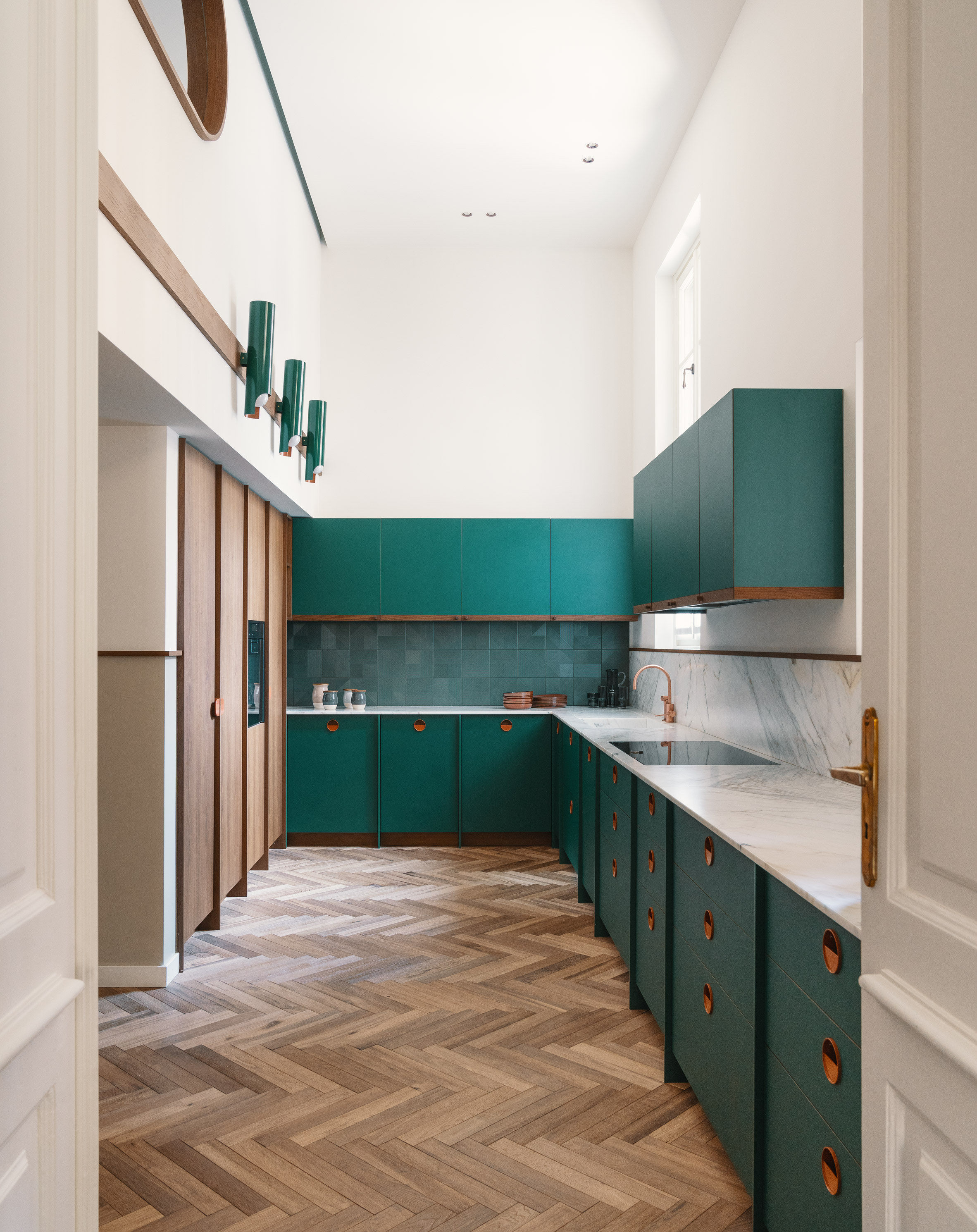 The adjacent kitchen is the only room in the apartment that is located in the 19th-century portion of the palazzo. It’s been finished with herringbone-pattern wooden floors and sea-green cabinetry with copper handles.

“The materials in each room chase and contrast, enhancing each other in their finishes,” added Fantolino. 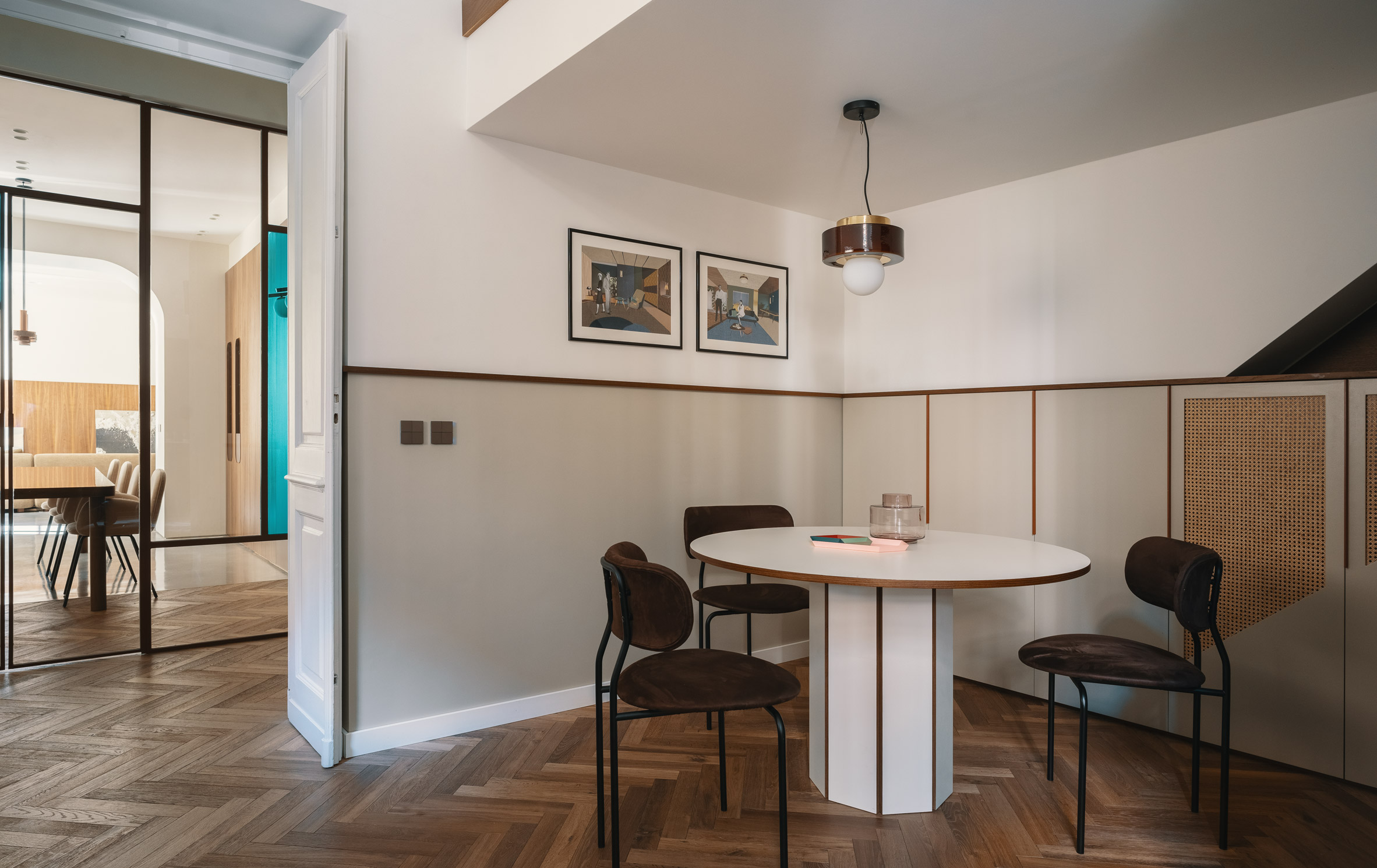 Blue furnishings and concrete flooring also help offset the richness of the colours and materials that appear in other parts of the home, like the bathroom.

Here walls have been clad with creamy tiles or pale veiny marble, while the bespoke vanity unit has been crafted from American walnut wood. Stacked glass bricks form a privacy screen for the shower cubicle. 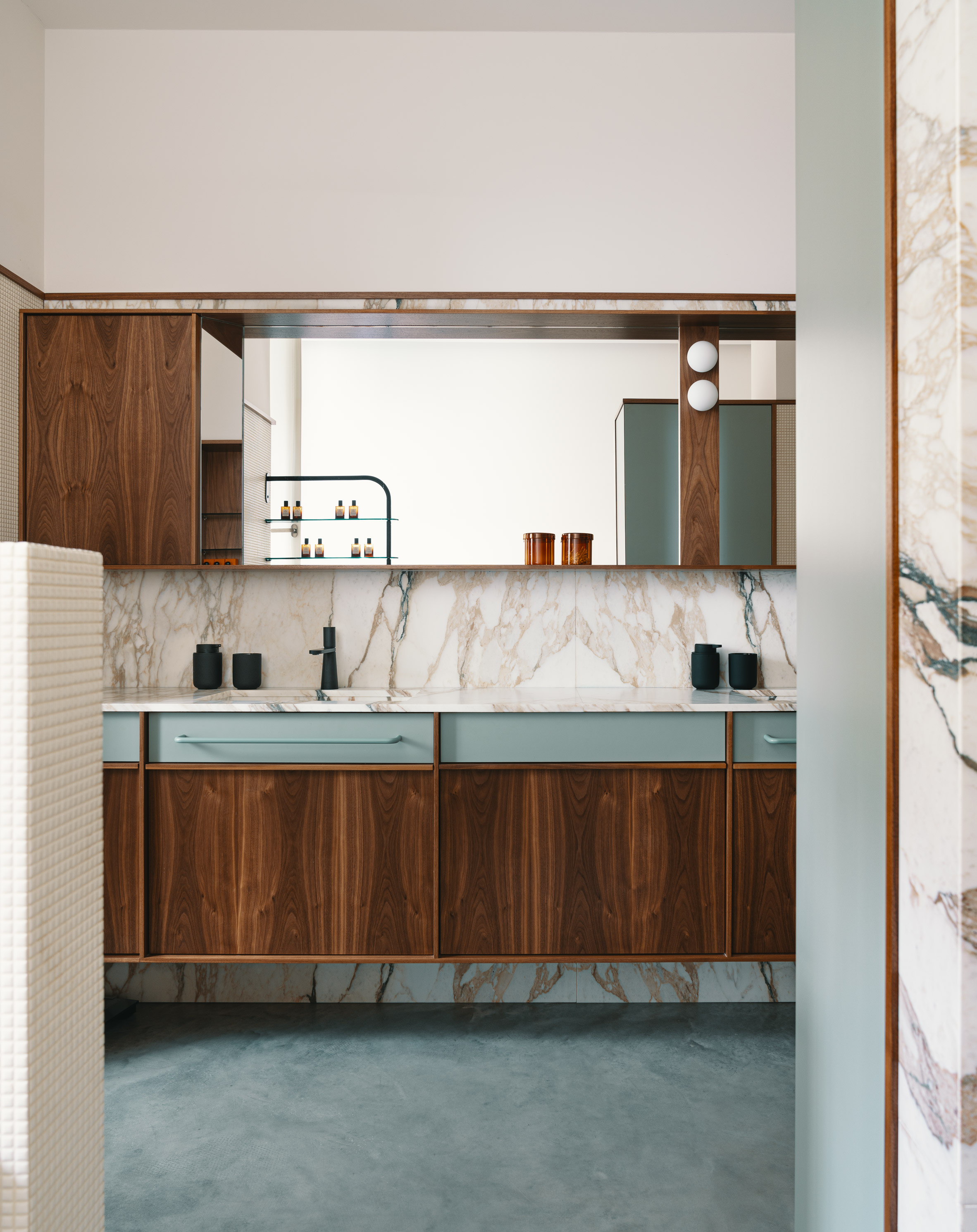 Casa Mille is the latest project by Fabio Fantolino, who established his self-titled studio in Turin in 2001. Last year, the architect converted two floors of a 17th-century Italian building into separate apartments for a mother and her grown-up son.

The mother’s apartment takes design cues from the 1950s, and is decked out in classic materials like marble, while the son’s apartment channels a more relaxed, 1970s-inspired aesthetic.

The post Casa Mille in Turin is set within the former home of an Italian count appeared first on Dezeen.