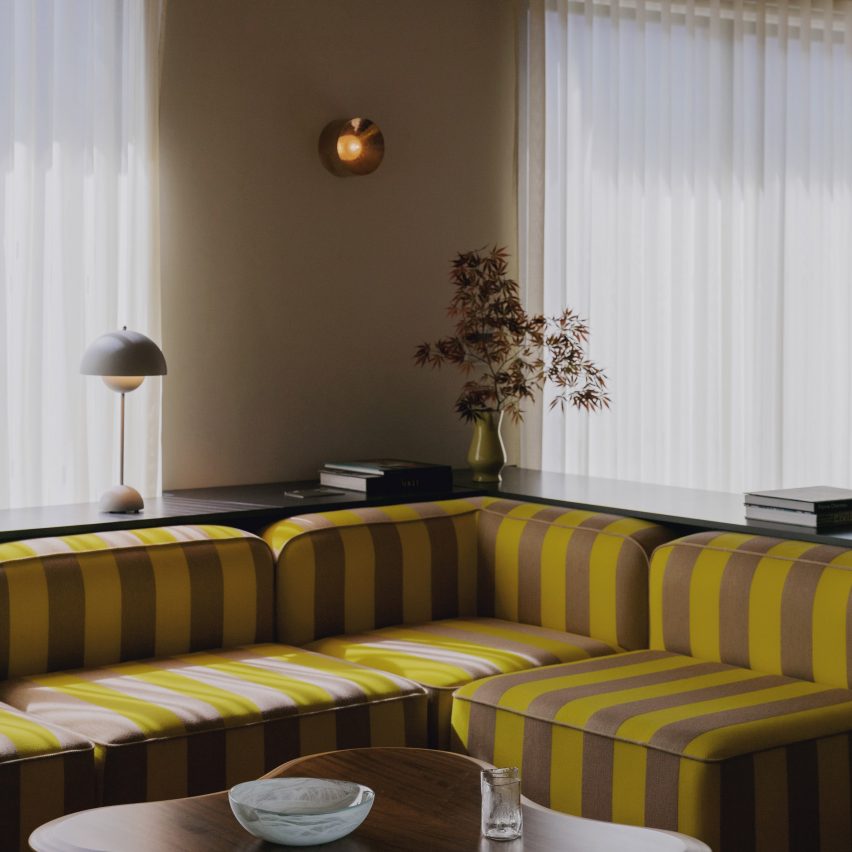 Mid-century homes in Palm Springs and vintage advertisements from the 1950s are just some of the things that design studio Daytrip drew upon to create the vibrant interiors of this central London office.

The media office takes over three floors of a converted warehouse in Clerkenwell that was originally built back in the 18th century. 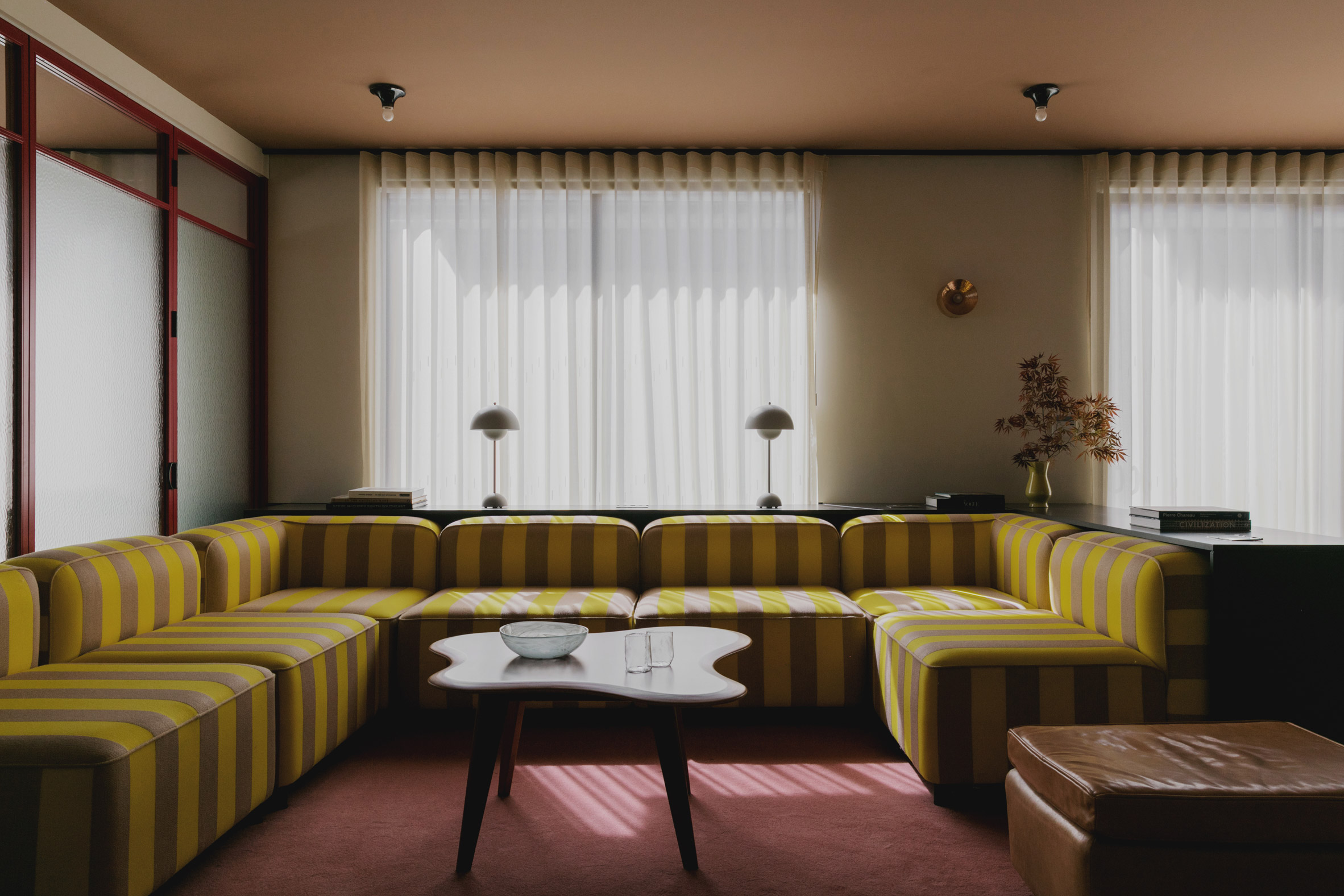 Inside there are still hints of the building’s industrial past, such as the exposed-brick walls and crittal windows, but Daytrip was asked to design a bold workspace that instead channelled a “strong feminine aesthetic”.

During the briefing process, the studio was presented with pictures by Slim Aarons – an American photographer known for capturing socialites and celebrities in glamorous locations – and images of the mid-century properties that populate the Californian city of Palm Springs. 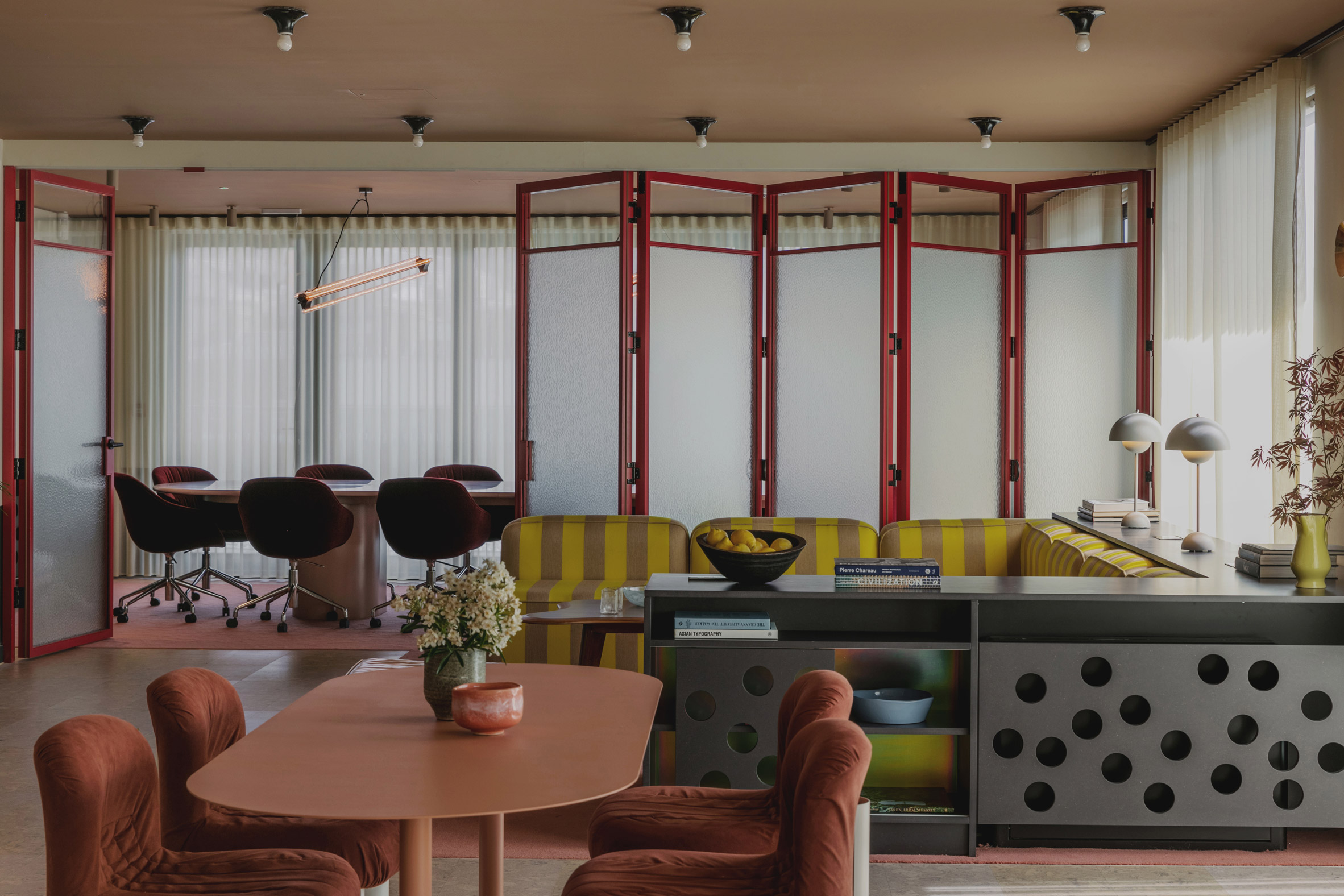 “There was a certain nostalgia and optimism evoked; hazy, relaxed summers away from the inner-city stresses – it felt like an enjoyable place to live and work,” the studio’s co-founder, Iwan Halstead, told Dezeen.

“We also looked at old vintage adverts of 1950’s kitchens, spaces that, at the time, were specifically designed and marketed for women – we wanted to flip this concept for the career-focused women in contemporary society,” he continued.

“We took references from the materials and colours and rooted it in the Clerkenwell building.” 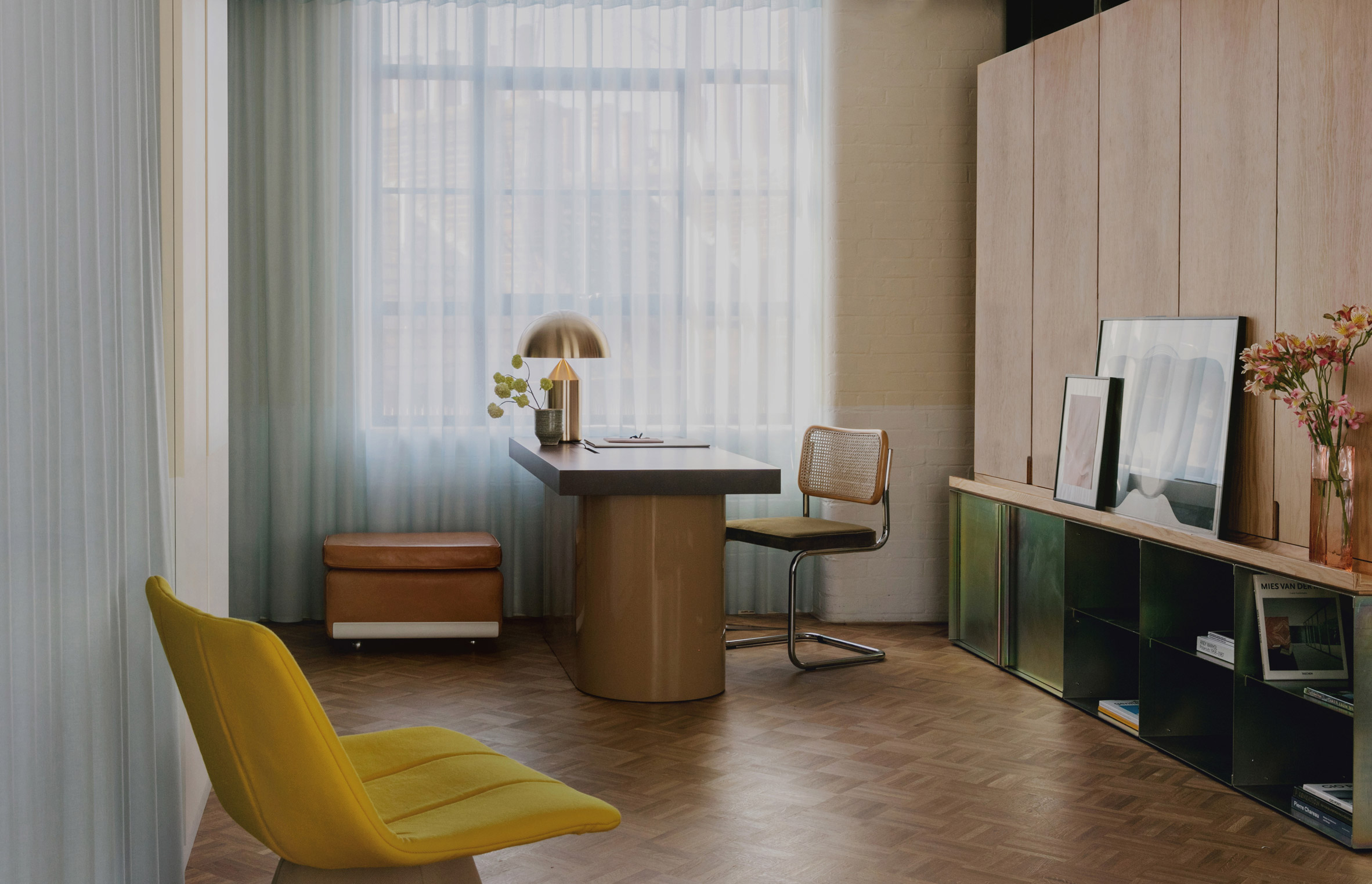 The upper floor of the office is a relaxed lounge-style room where staff can sit and work informally as groups.

One half of the space is dominated by a chunky sectional sofa upholstered in yellow-and-beige striped fabric, while the other half has been dressed with a couple of plush navy armchairs and a blush-pink desk for four.

A sideboard that runs around the periphery of the room has been dotted with Verner Panton‘s signature Flowerpot lamps. 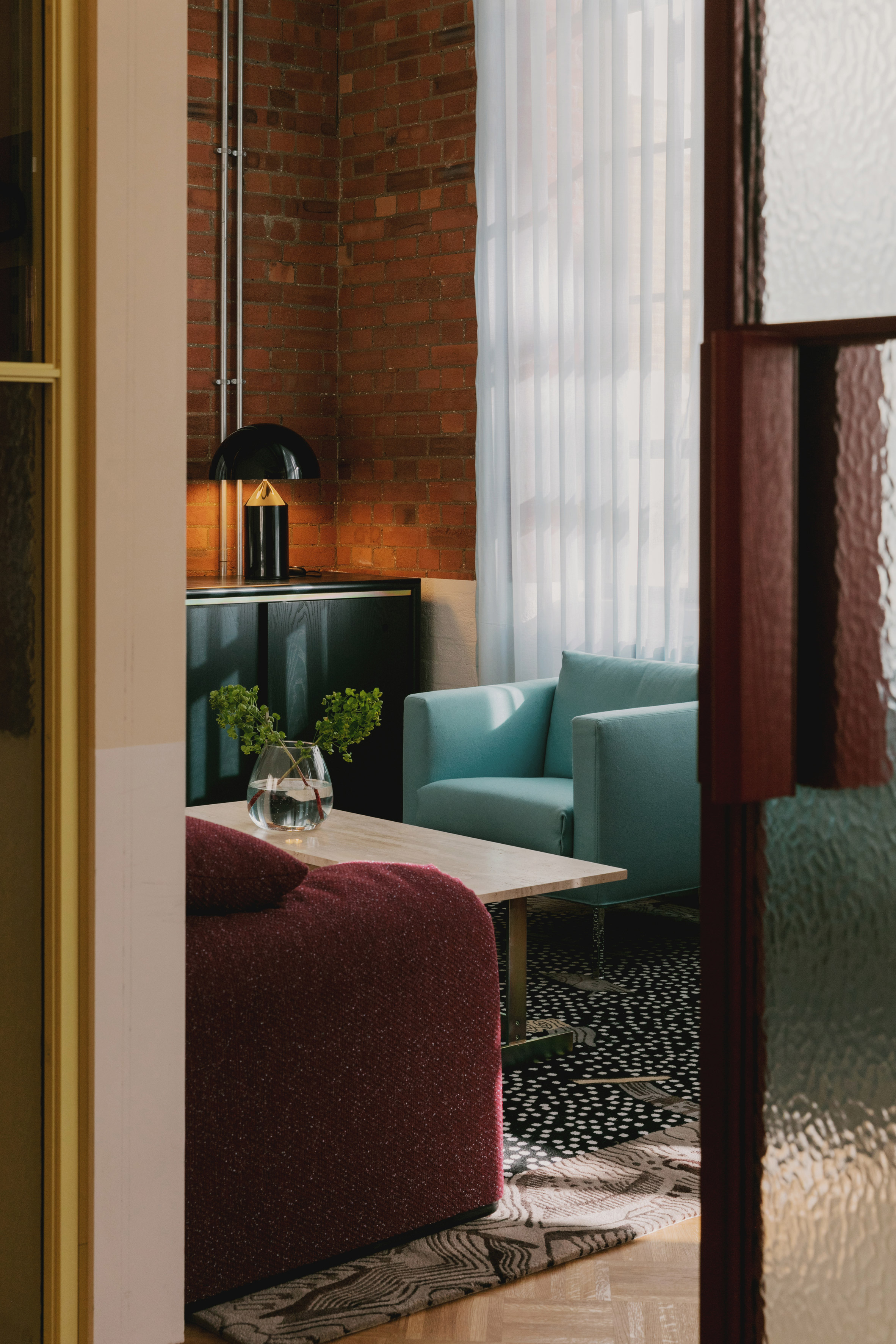 Concertina doors inset with panels of mottled glass can be drawn back to reveal a large boardroom.

The central table is surrounded by merlot-red velvet chairs, and exposed-wire strip lights have been dangled from the ceiling. 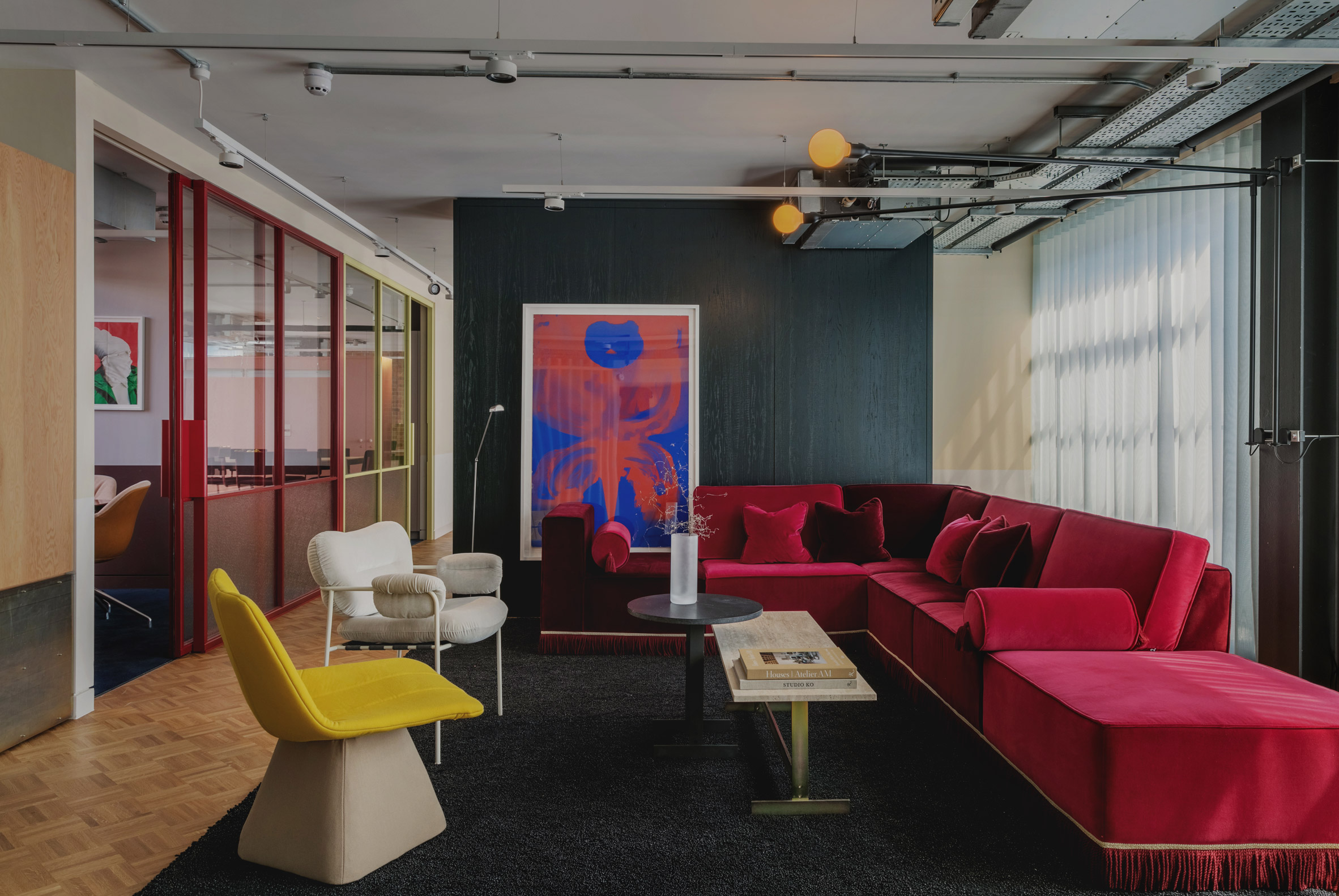 The remaining two floors have been given a more cellular arrangement, complete with blocks of workstations and private offices where staff can work independently.

Parquet wooden flooring and MDF storage feature throughout. Sheer curtains have also been hung in front of nearly all the windows, gently bathing rooms in natural light.

“There is an inherent cinematic undertone that runs throughout, a nostalgic nod to the film industry, yet on closer examination there is contemporary design and details,” added the studio. 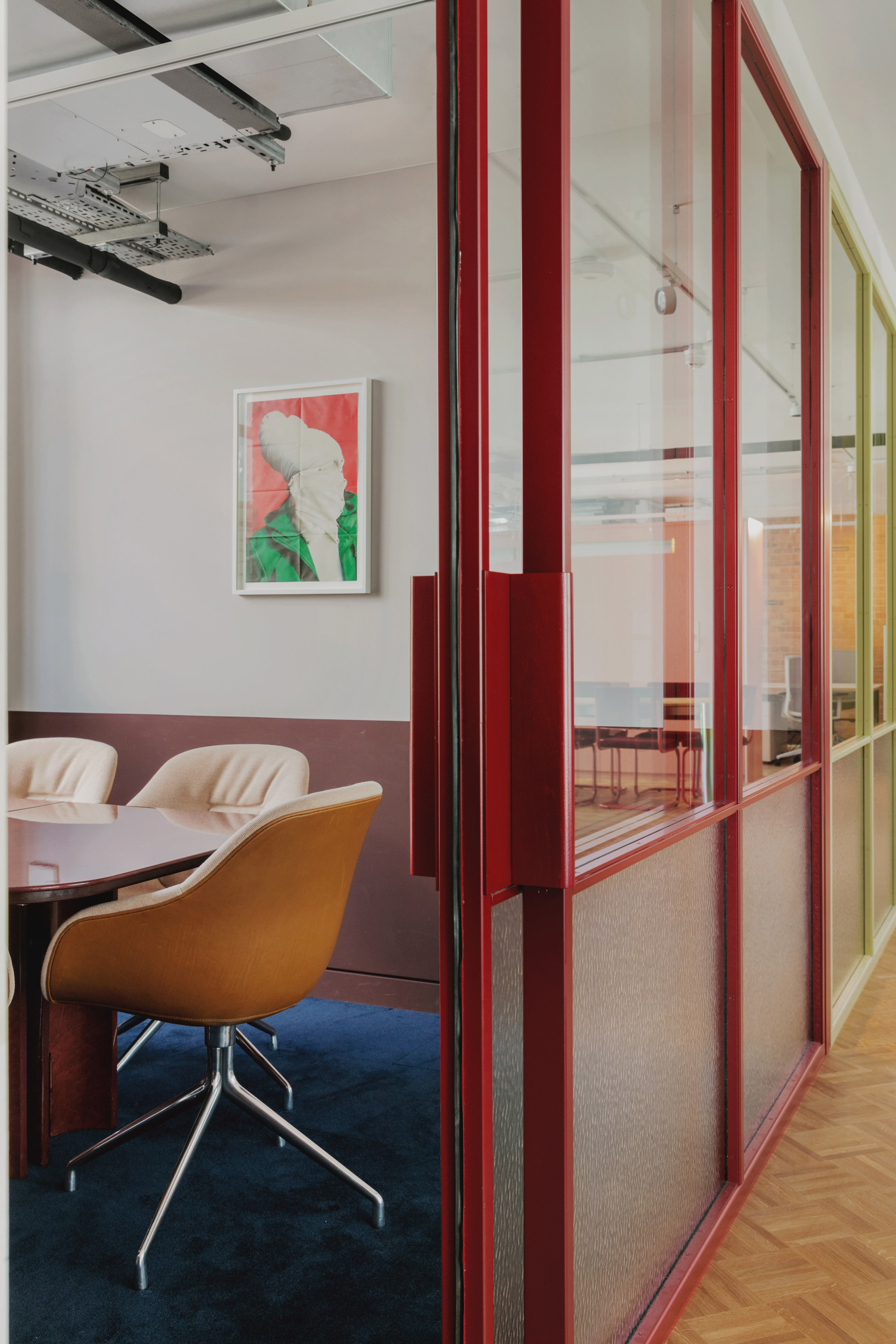 Meeting areas on these levels are equally as opulent as those on the top floor – one is anchored by a huge lipstick-red sofa with tassel fringing. Others have been finished with heavy midnight-blue carpeting, patterned rugs and tables with glossy lacquer surfacetops.

They’re closed off from the main floorplan by colourful gridded partitions.

At lunchtime, staff can gather in the break-out areas that feature jet-black joinery and breakfast islands clad with baby-pink tiles. 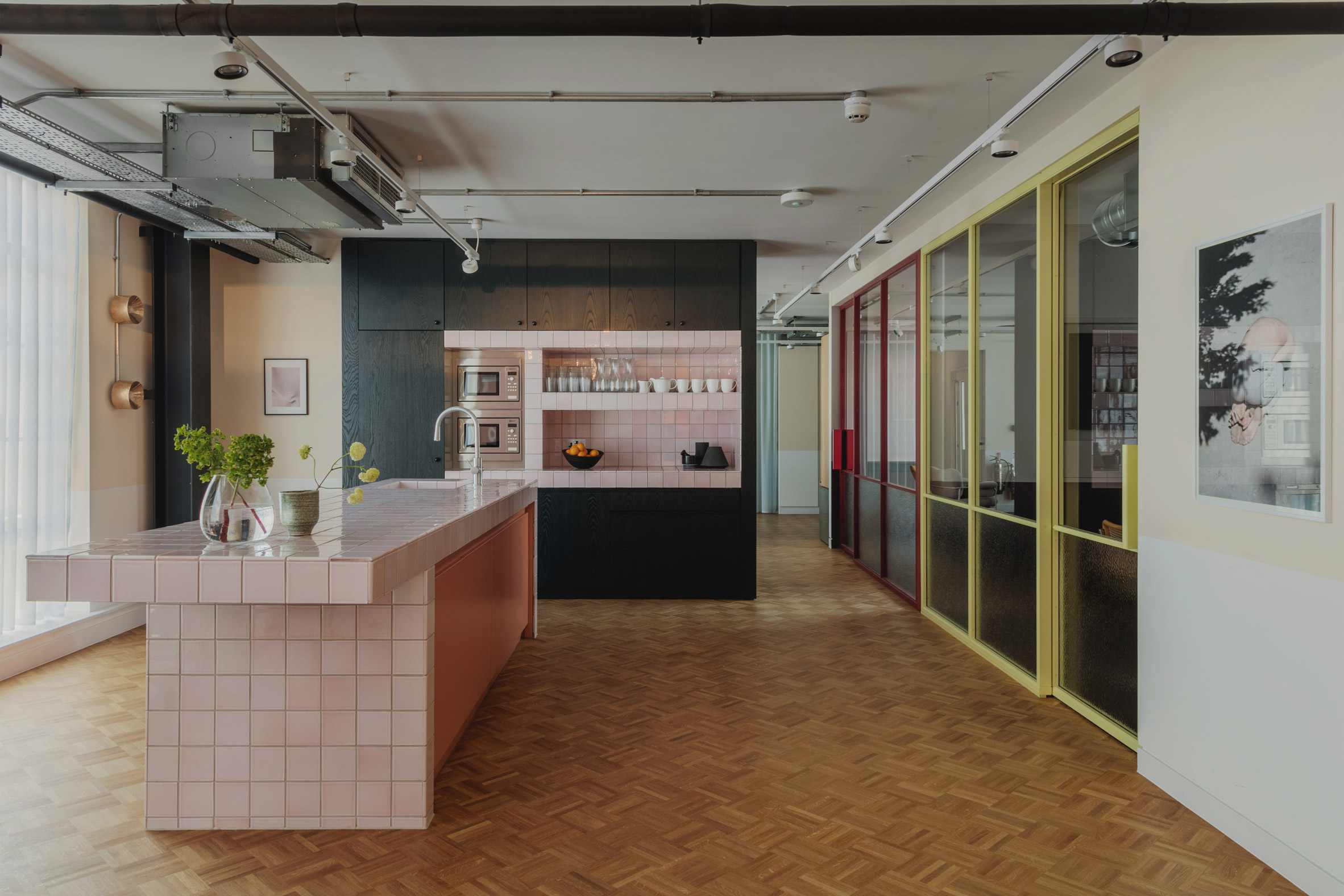 This office by Daytrip joins a number of striking workspaces in Clerkenwell, which is often considered the design district of London and home to several trendy companies.

Other offices in the area include one for Universal Design Studio, which is designed to showcase the company’s creative process, and one for Airbnb which takes inspiration from a 15th-century painting.

Photography is by Mariell Lind Hansen.