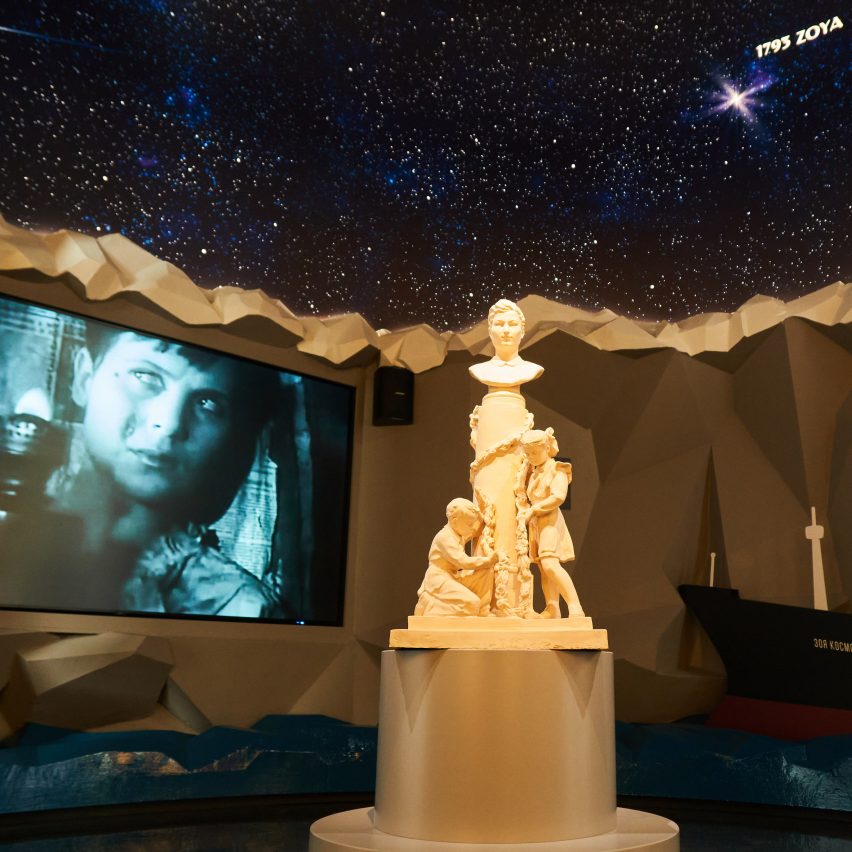 VDF studio profiles: Lorem Ipsum is a creative studio that crafts exhibitions and experiential installations, such as an audiovisual recreation of an airstrike, that fully immerse visitors in a story.

Since being founded in New York in 2000, the company has expanded to include London and Moskow offices where designers and architects, writers and filmmakers work together to plan and produce their multidisciplinary projects.

“We think of ourselves as storytellers,” Lorem Ipsum said.

This is exemplified in one of the studio’s flagship projects – the Zoya museum in the Russian village of Petrishchevo, near Moscow.

The building was designed to tell the story of the decisive Battle of Moscow in World War II.

It is named after 18-year-old guerrilla fighter Zoya Kosmodemyanskaya, who burned down a local town to slow the approach of the German army before being publicly hung by the Nazis.

The Zoya museum was curated by Lorem Ipsum’s co-founder and creative director, Abigail Honor, and uses original artefacts, multimedia technology and immersive installations to bring visitors closer to this history.

Their journey starts in a reimagined Soviet classroom from the 1930s where visitors can gain an insight into Kosmodemyanskaya’s life, hopes and aspirations through carefully recreated artefacts such as books and notebooks.

An audiovisual spectacle, consisting of flickering blue lights and cinematic surround sound, interrupts the experience and creates the impression of being under attack by German warplanes.

Honor designed an interactive activity for visitors in which a tour guide trains them in basic military skills, much like Kosmodemyanskaya was taught when she joined the Soviet resistance groups.

Lorem Ipsum also recreated the Nazi-occupied Soviet village that Kosmodemyanskaya was tasked with setting ablaze. Accompanied by dramatic lighting, an audio story based on real memoirs from fellow squadron members talks visitors through her mission and her ultimate capture.

Another section of the museum includes a full-scale trench, strewn with real war artefacts and surrounded by a 120-degree wraparound screen showing an animation of approaching German tanks.

The final section displays hundreds of personal stories from people involved in the war, alongside an interactive recording booth that allows visitors to film themselves telling the story of their own relatives, as well as scanning their photos to be immortalised in the museum.

The aim of the exhibition design was to allow visitors to both emotionally relive this historical event, and have a space where they can reflect and consider their own family background.

Virtual Design Festival is the world’s first online design festival, taking place from 15 April to 30 June. For more information, or to be added to the mailing list, contact us at [email protected].

A studio profile on Virtual Design Festival could expose your work to Dezeen’s three million monthly website visitors. Each studio profile will be featured on the VDF homepage and included in Dezeen’s daily newsletter, which has 170,000 subscribers.