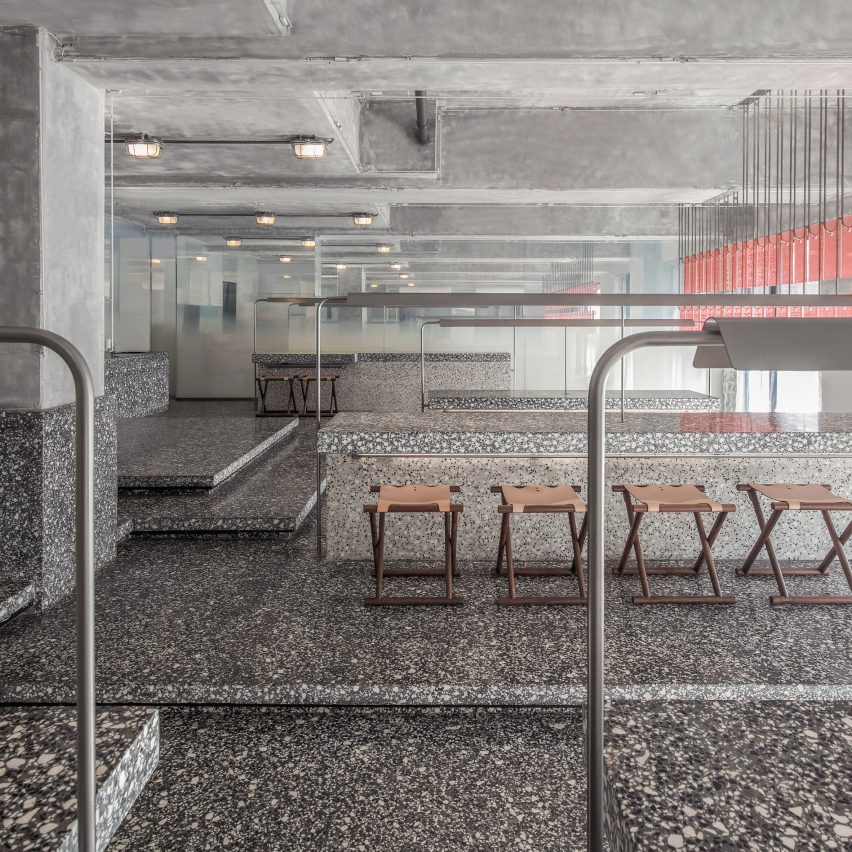 The stepped terrazzo floor, strip lighting and foggy mirrored walls inside this Beijing noodle bar designed by Office AIO are meant to mimic the urban makeup of the city of Chongqing.

Chubby Girl is situated in Beijing’s Xiang’Er hutong and, since 2015, has been locals’ go-to spot for Chongqing noodles – a spicy street food dish that hails from the city of Chongqing in south-west China.

When Office AIO was approached to overhaul the restaurant, it was initially hesitant to make major aesthetic changes to the interior that loyal diners had grown accustomed to. 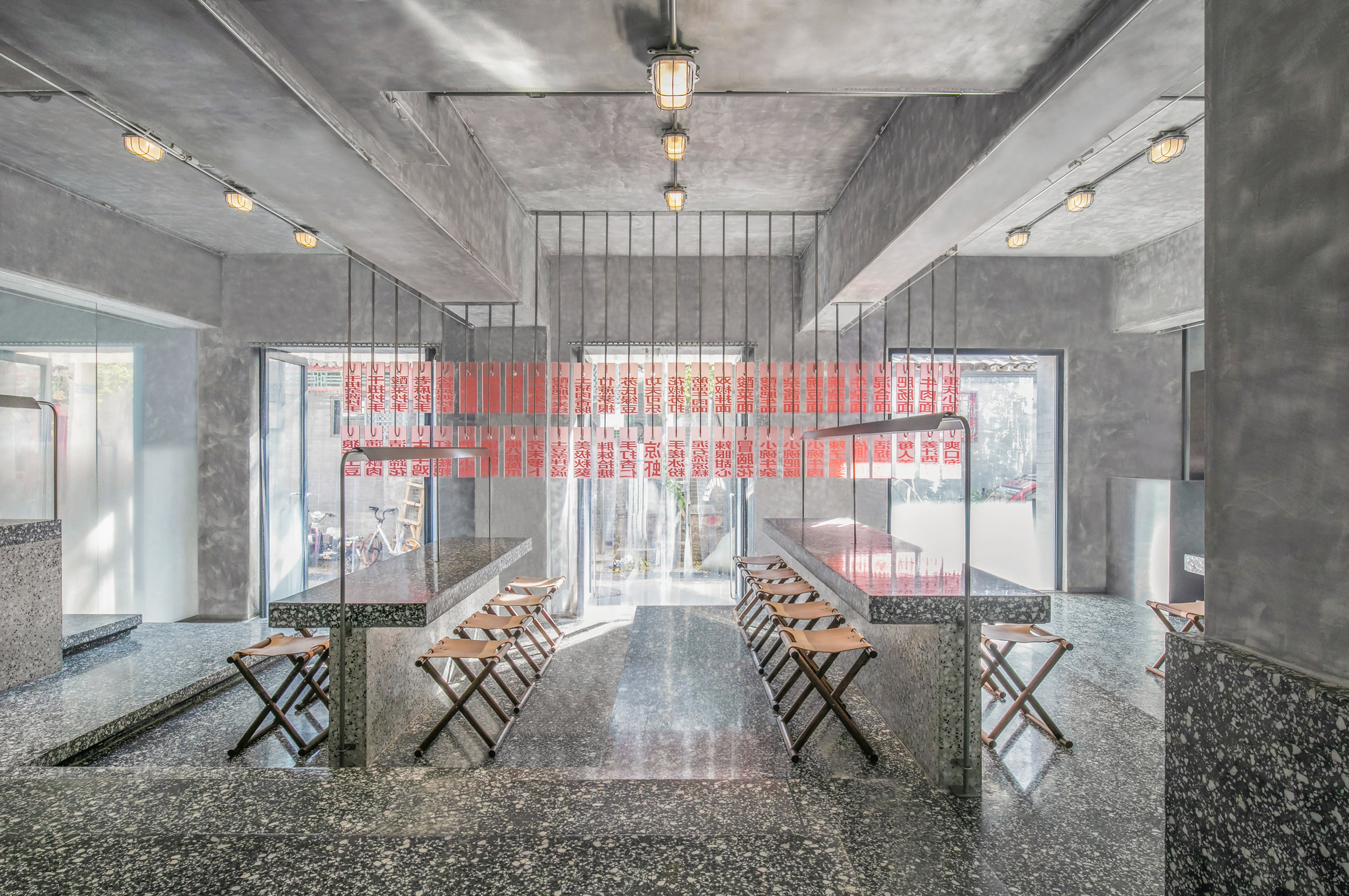 The studio ended up designing a fit-out informed by the landscape of Chongqing, nodding to both Chubby Girl’s menu and the history of the restaurant – the first branch opened in Chongqing in 1998.

A key point of reference was the work of photographers Nadav Kander, Mark Horn and Tim Franco, who have all captured images of Chongqing’s dense urban fabric, towering industrial structures and twinkling night skyline. 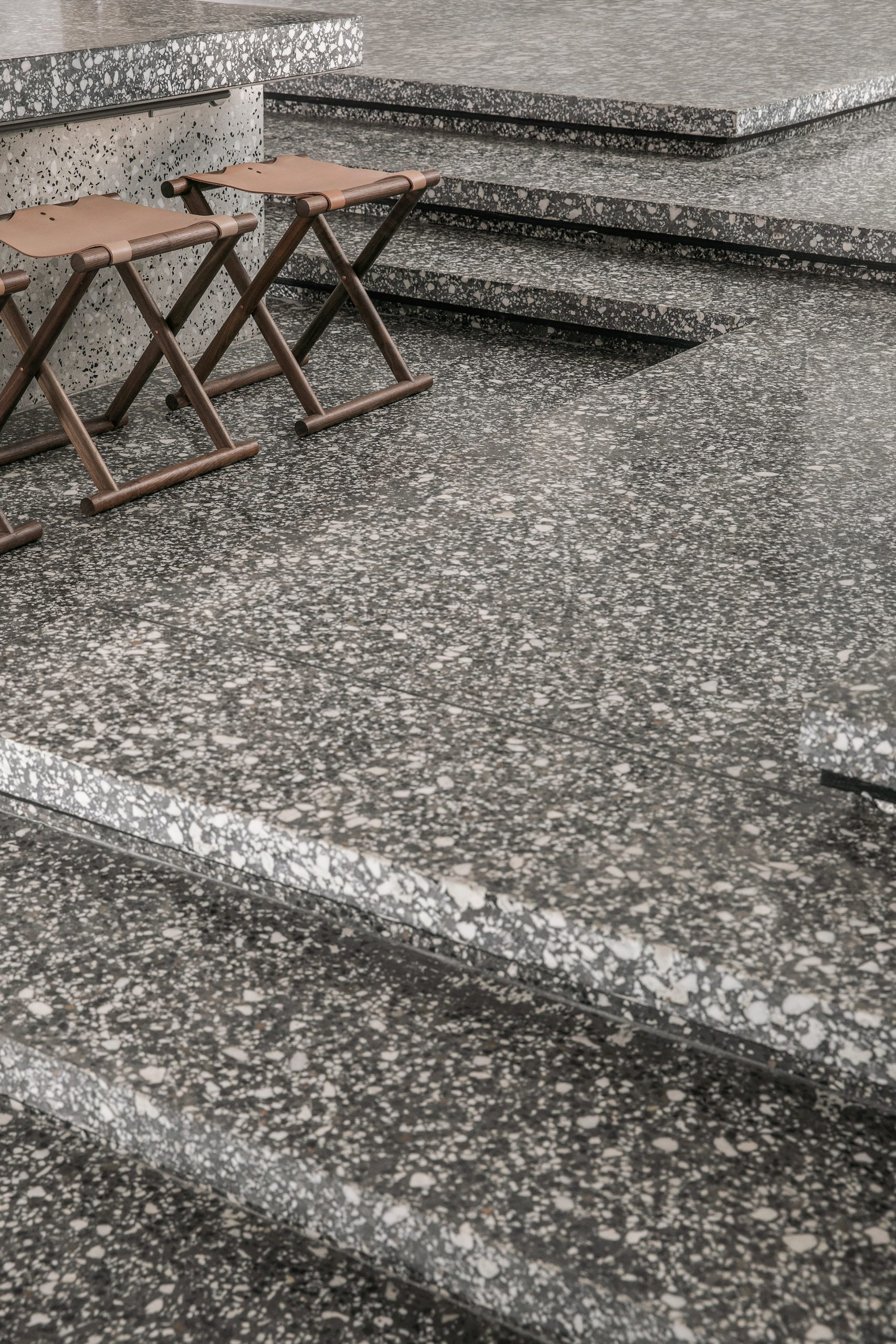 “From its unique landscape and climate, to its ‘concrete jungle’ appearance and the inhabitants’ ability to adapt to rapid urbanisation, as well as the more recent development of it becoming one of China’s most vibrant incubators of street art and music.” 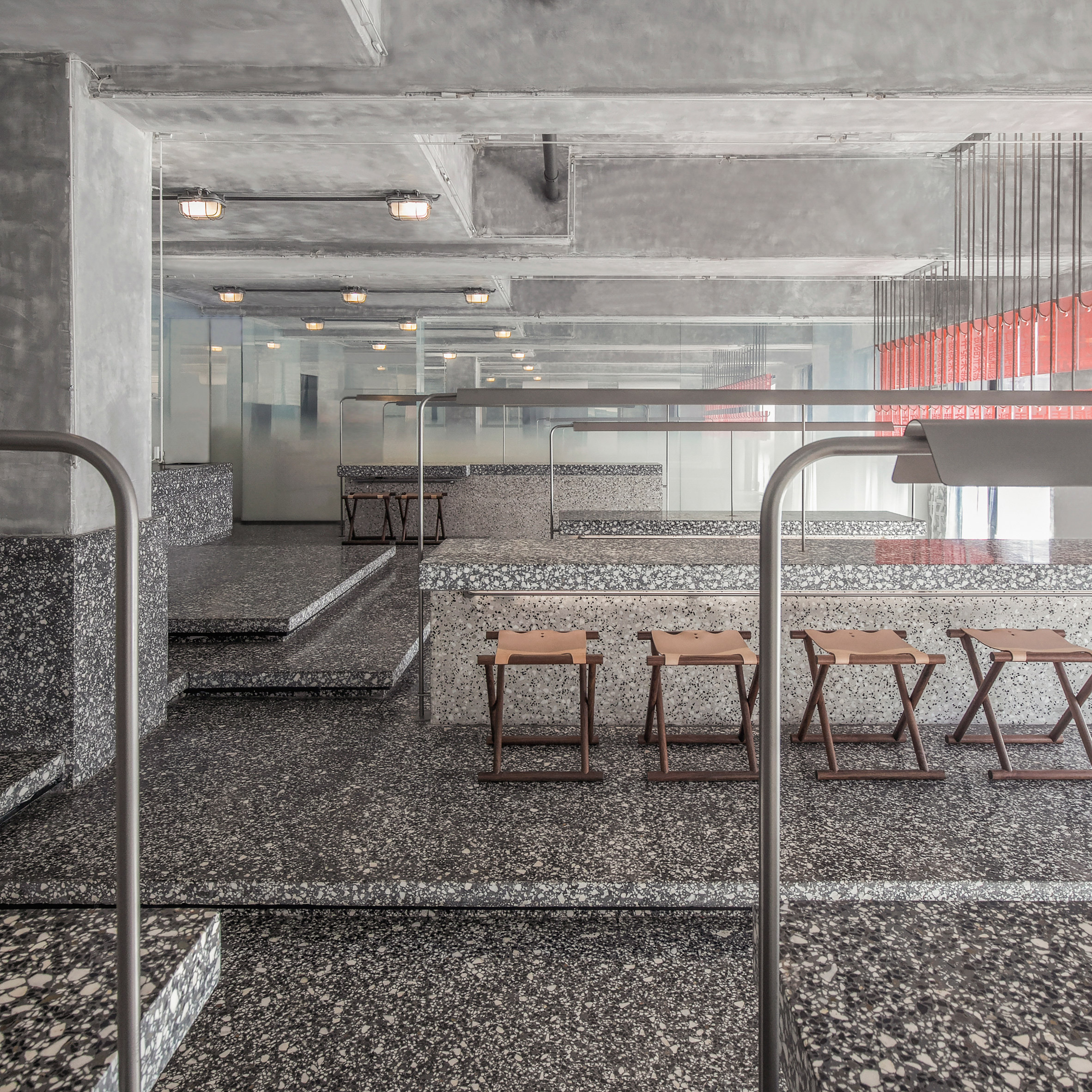 There is a 55-square-metre kitchen which runs the entire width of the restaurant’s rear wall, a 15-square-metre prep area dedicated to making drinks and desserts, and an 80-square-metre dining area.

Throughout runs a series of chunky grey terrazzo plinths inlaid with white aggregate, all set at slightly different heights. Together they’re meant to reflect the sharp rises and falls of Chongqing’s terrain, which is intersected by various rivers and mountains. 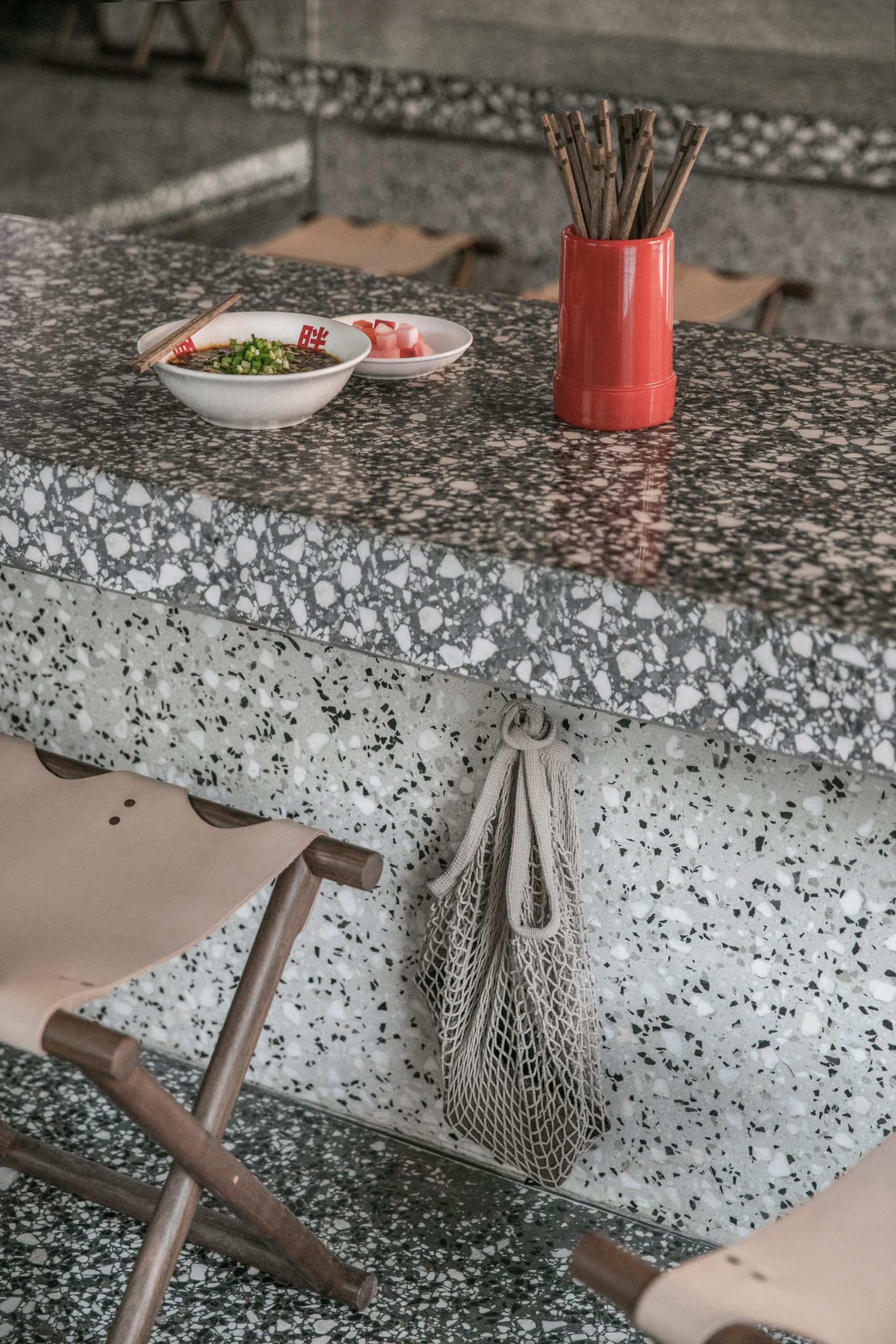 A soft glow has been made to emanate from underneath the plinths and a network of strip lights have been installed across the ceiling in reference to city nightscapes.

The same terrazzo applied across the floor has been used to create a series of communal tables. Each one is surrounded by fold-out chairs, otherwise known as mǎzhá, which the studio selected for their resemblance to those typically seen outside Chinese food stalls. 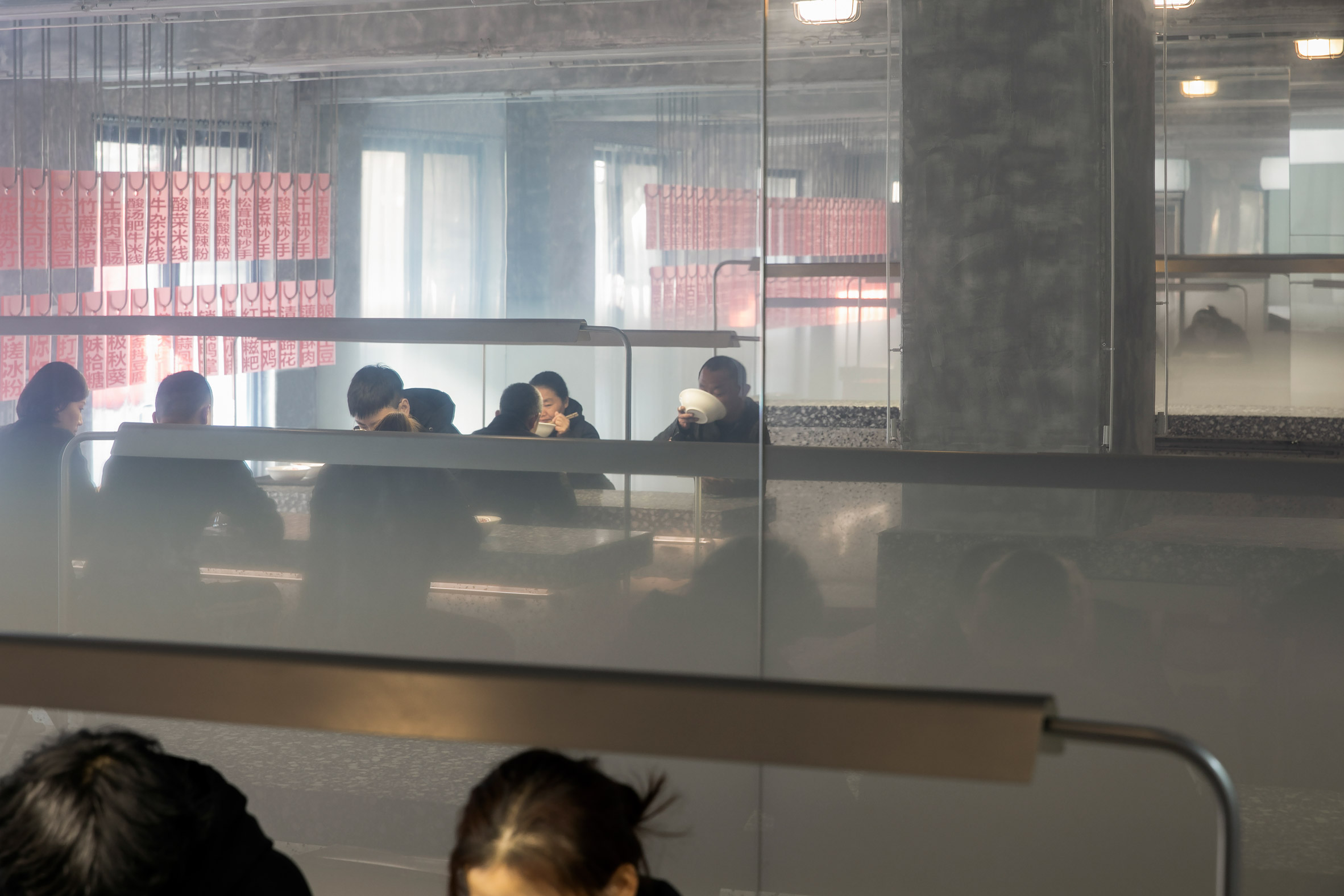 Surrounding walls have been clad with panels of smoky glass – as if touched by city fumes – and red acrylic slips denoting meals on Chubby Girl’s menu been suspended from the ceiling on long metal hooks.

“This form of menu is actually very common for street-food kiosks and casual food establishments, but its usually made out of wooden panels as its a material that’s easy to source and manipulate,” the studio’s co-founder, Isabelle Sun, told Dezeen.

“The dishes offered by the restaurants are written on these boards, and when sold out, the boards would be flipped around to demonstrate its unavailability,” she continued.

“Both the Chongqing and Beijing Chubby Girl noodle bars had their menu displayed in this fashion, and we thought it would be only appropriate to keep this familiar element – reinterpreting them using thick translucent acrylic boards adds a touch of playfulness.” 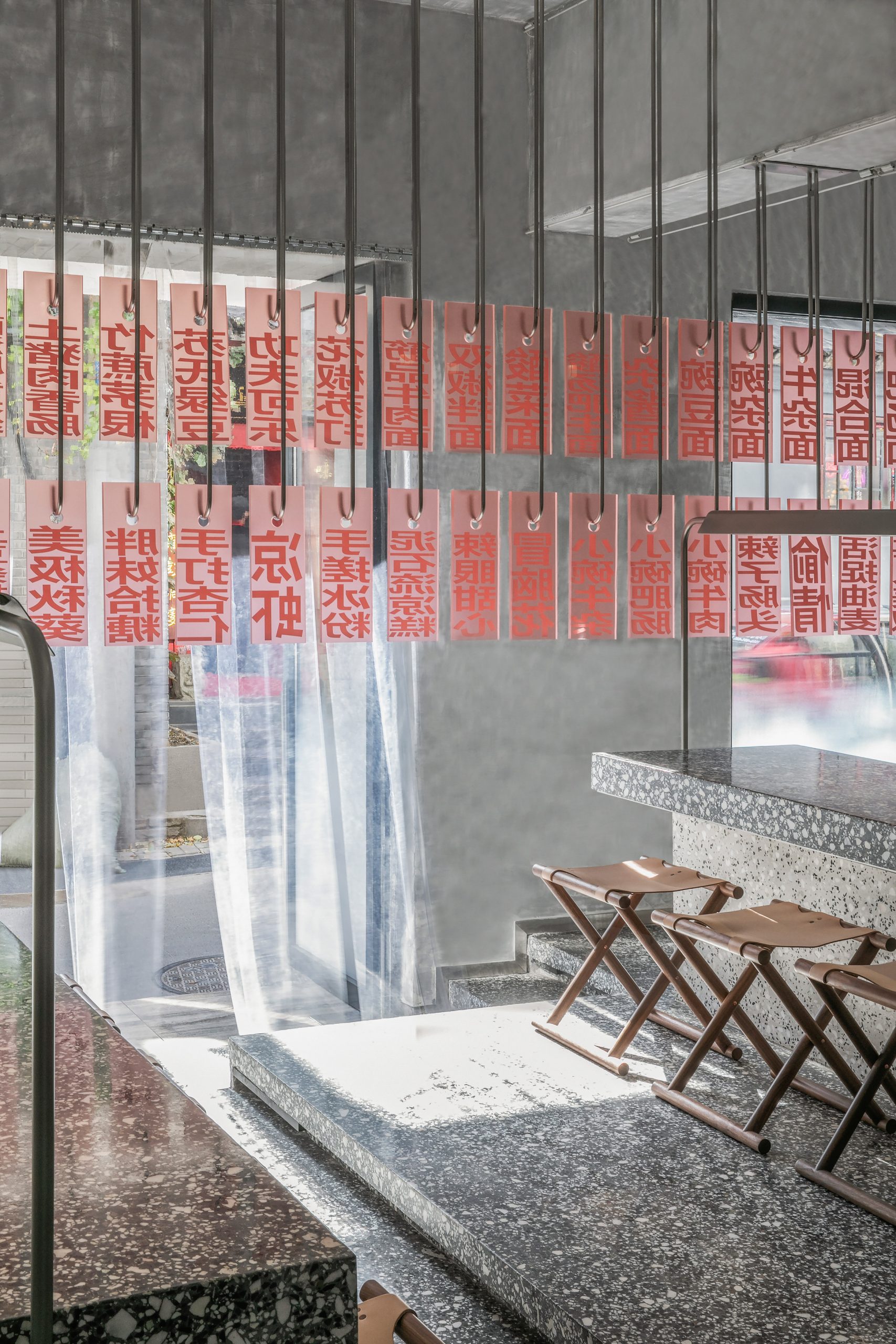 Chubby Girl takes over part of a grey-brick building in Xiang’Er that Office AIO recently converted into the Read and Rest Hotel.

Inside, the hotel has a series of minimalist guest suites decked out in calming shades of grey and an entire library filled with contemporary print magazines.

The studio was founded in 2014 by Tim Kwan and Isabelle Sun, who will both be on the judging panel of this year’s Dezeen Awards.

The post Chubby Girl noodle bar in Beijing takes cues from the landscape of south-west China appeared first on Dezeen.