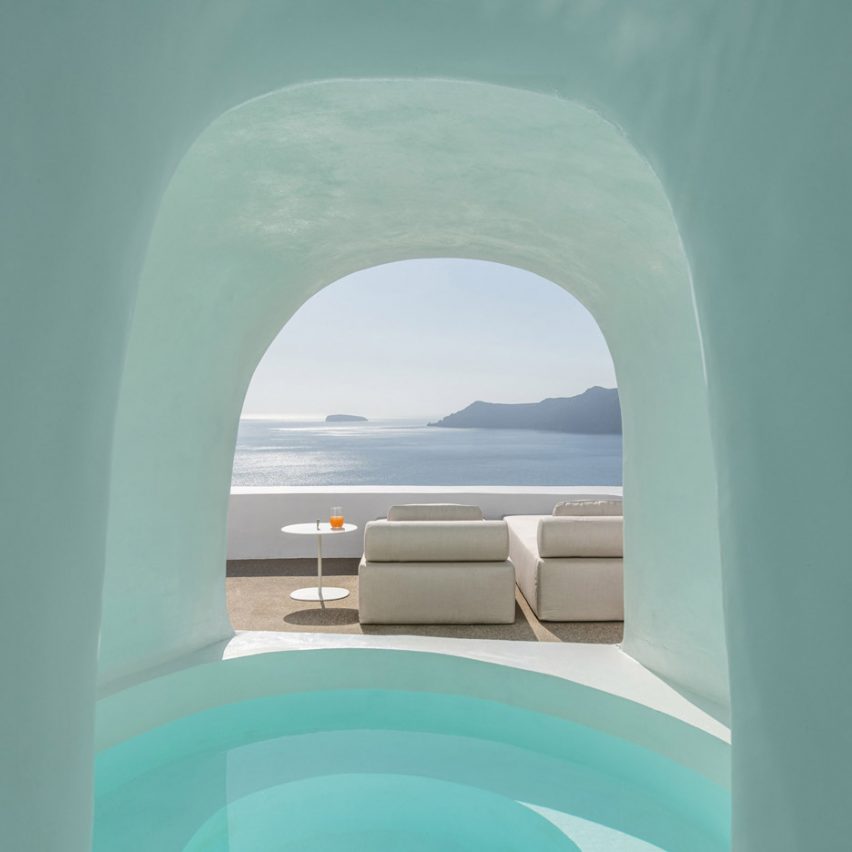 From converted caves to underground pools, here are seven hotels and houses on the Greek island of Santorini designed by local studio Kapsimalis Architects. 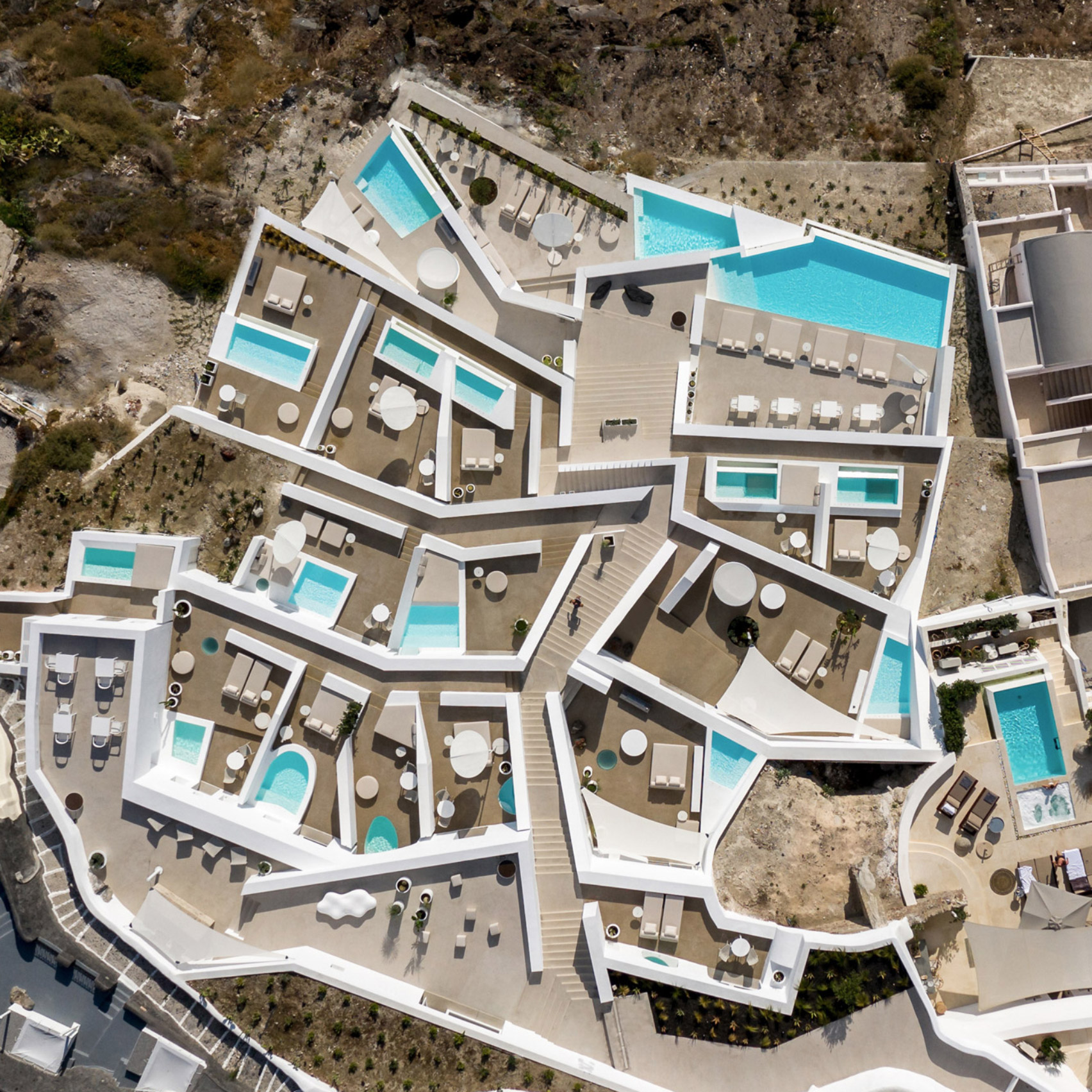 Stepping down towards the sea from the cliffs of the village of Odi, Saint Hotel features terraced patios with bright blue pools and white walls.

In total the hotel contains 16 rooms that occupy converted barns and cellars or have been dug straight into the cliffside. The suites open out onto private terraces separated by bright white walls, which have pools and loungers with views out over one of Santorini’s volcanic bays.

Find out more about Saint Hotel › 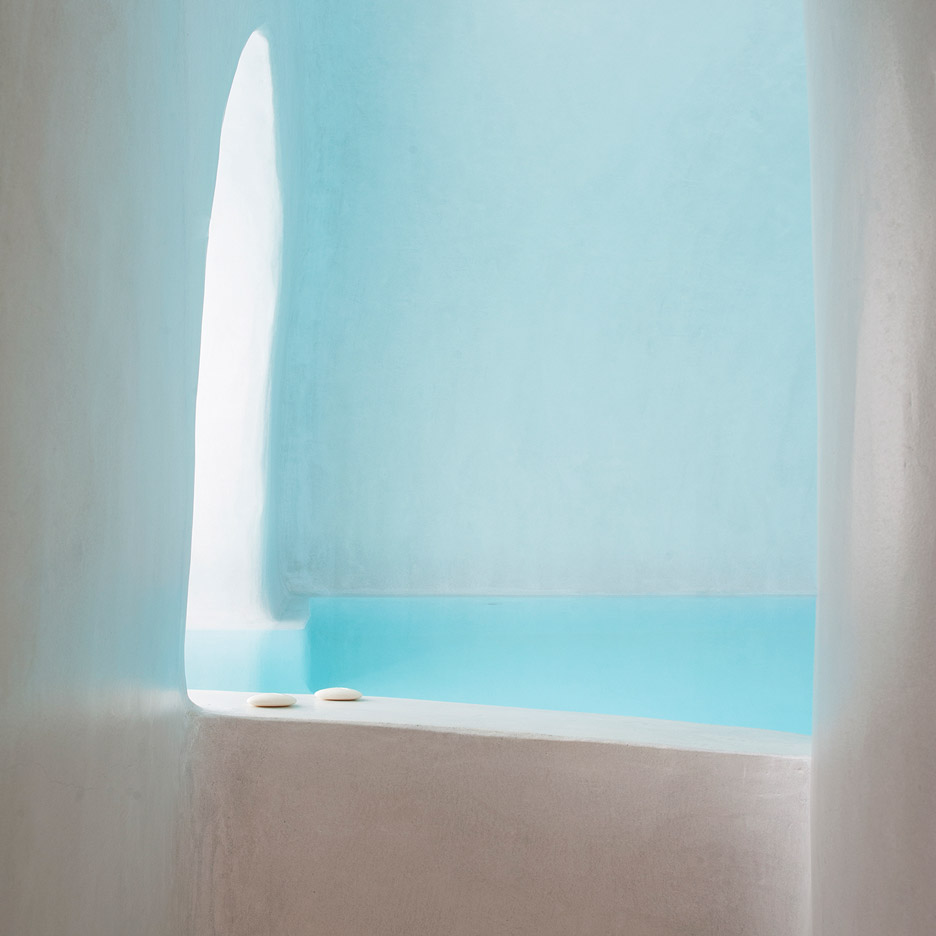 Kapsimalis Architects renovated this holiday home in Fira, adding two roof terraces that each have a plunge pool.

A further sunken pool in the basement sits under a vaulted white ceiling, visible through an arched window behind one of the home’s beds.

Find out more about Holiday House in Fira › 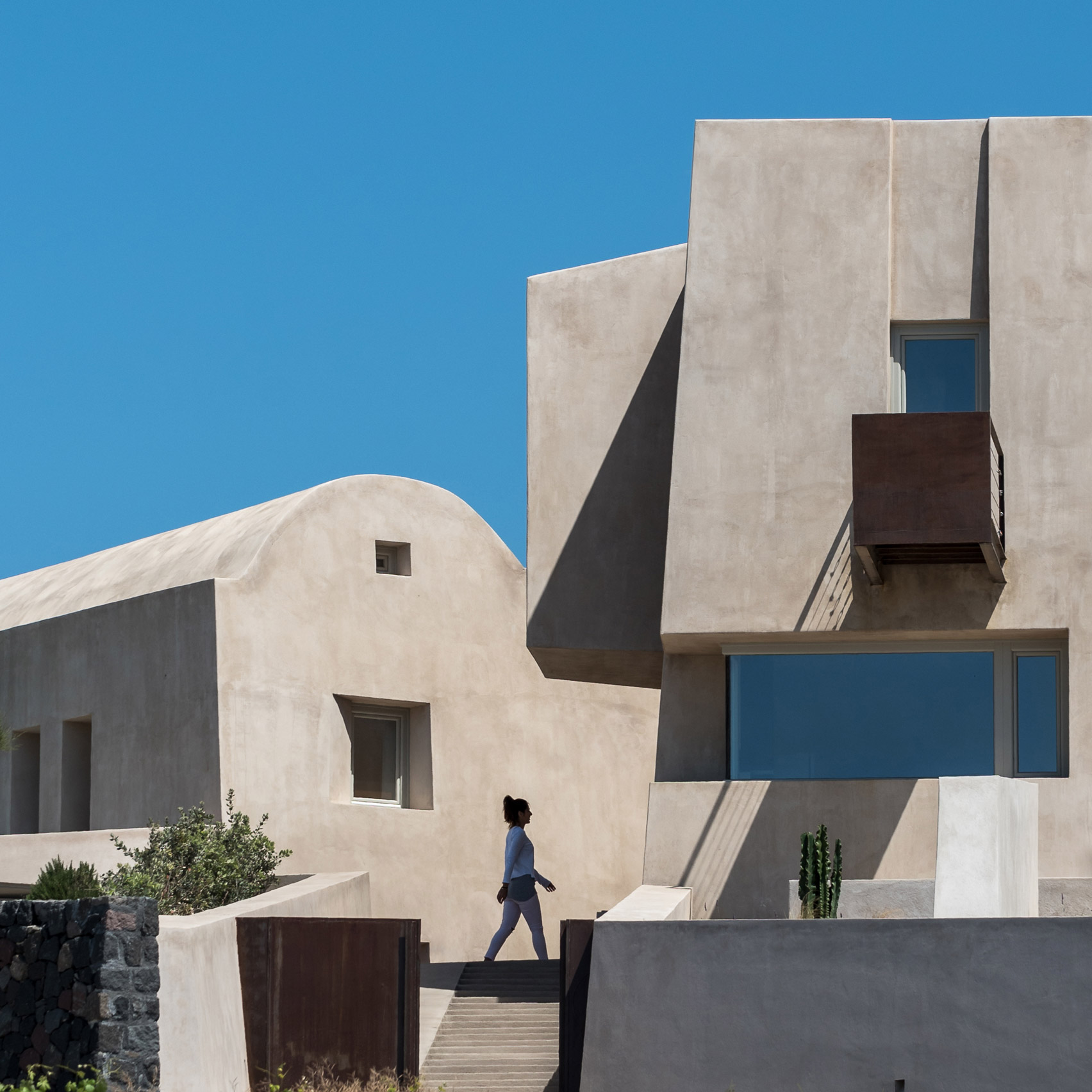 Informed by the machinery used to quarry pumice out of the volcanic soil of Santorini, House in Pyrgos rises like a fortress or a rocky outcrop from the landscape.

“All pieces of the architectural history of the island are subtly combined and embedded in this monolithic structure,” said Kapsimalis Architects.

Find out more about House in Pyrgos › 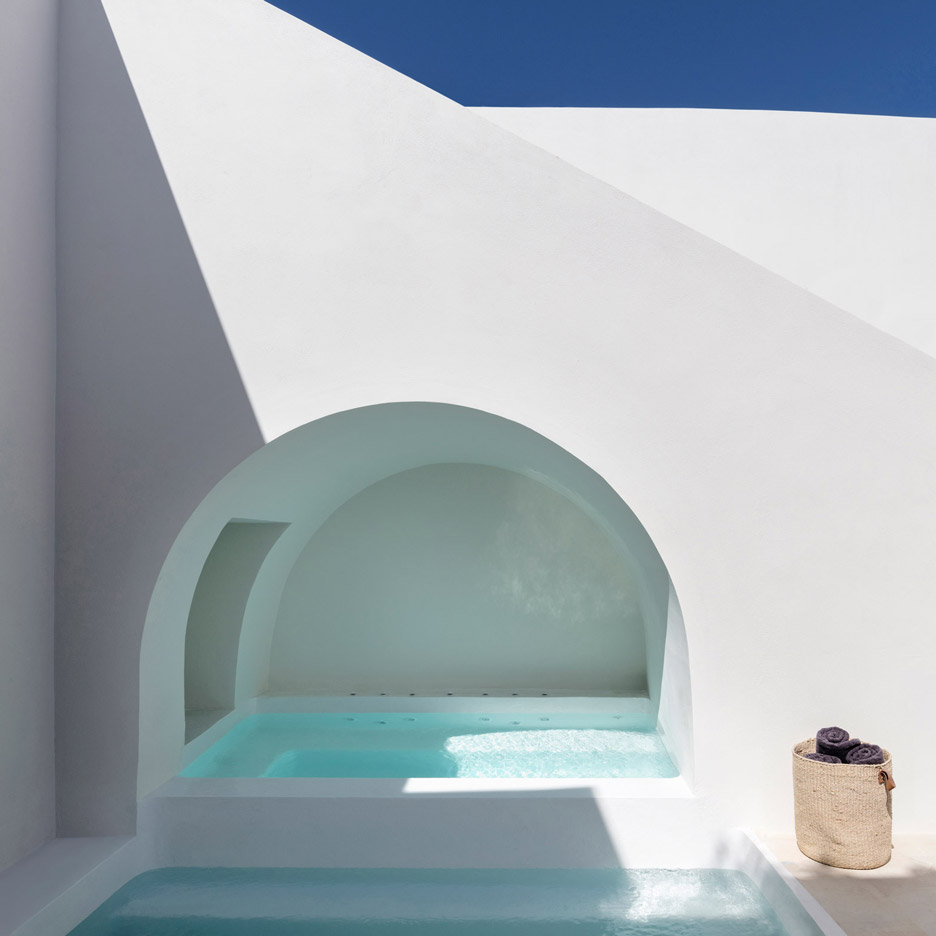 The underground caves of an old house in Fira were converted into a duo of holiday homes by the architecture studio.

A walled courtyard and an old donkey barn form part of the complex, which now has a series of pools in the sun or under a shady arch carved into a staircase.

Find out more about Two Holiday Residences in Fira › 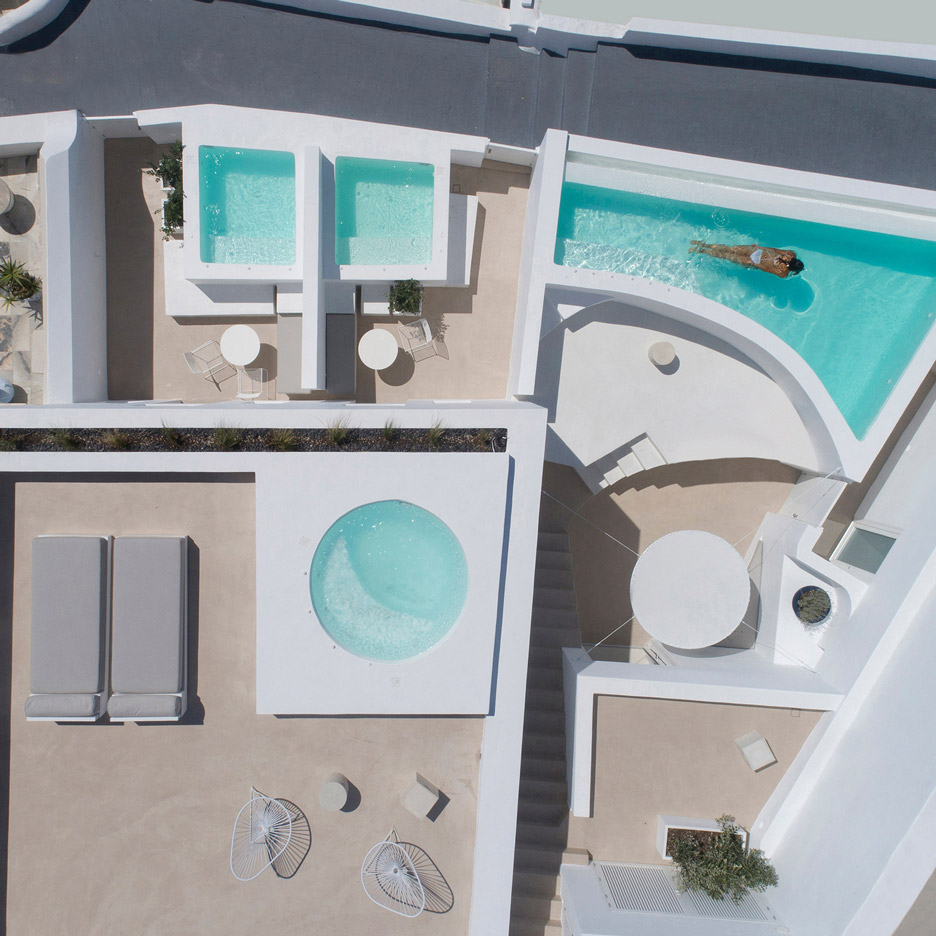 The studio turned an old cave house with an underground warehouse and bakehouse into a summer home with terraces that feature swimming pools in three different shapes.

“The main idea was to maintain the existing traditional architectural forms of the exterior, and to show up the diversity and the values of their interior spaces,” said the studio.

Find out more about Summer Residence › 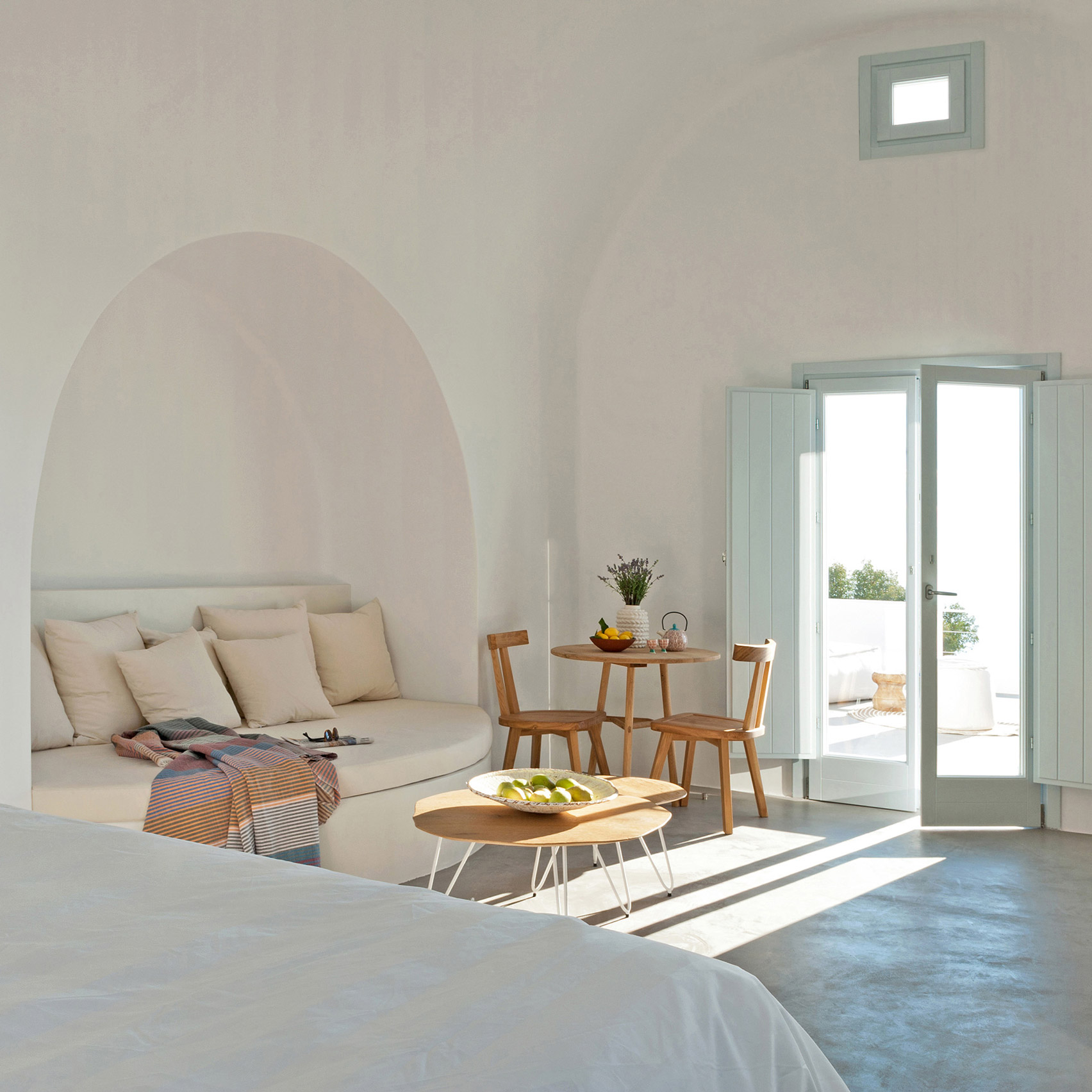 The studio designed four holiday apartments in a two-storey building that nestle into the side of the Profitis Ilias mountain, close to the highest point of Santorini.

The building’s white volumes were chose to echo the island’s traditional architecture, while rocks excavated from the site were used to build the block’s retaining walls.

Find out more about Summer House on the Mountain › 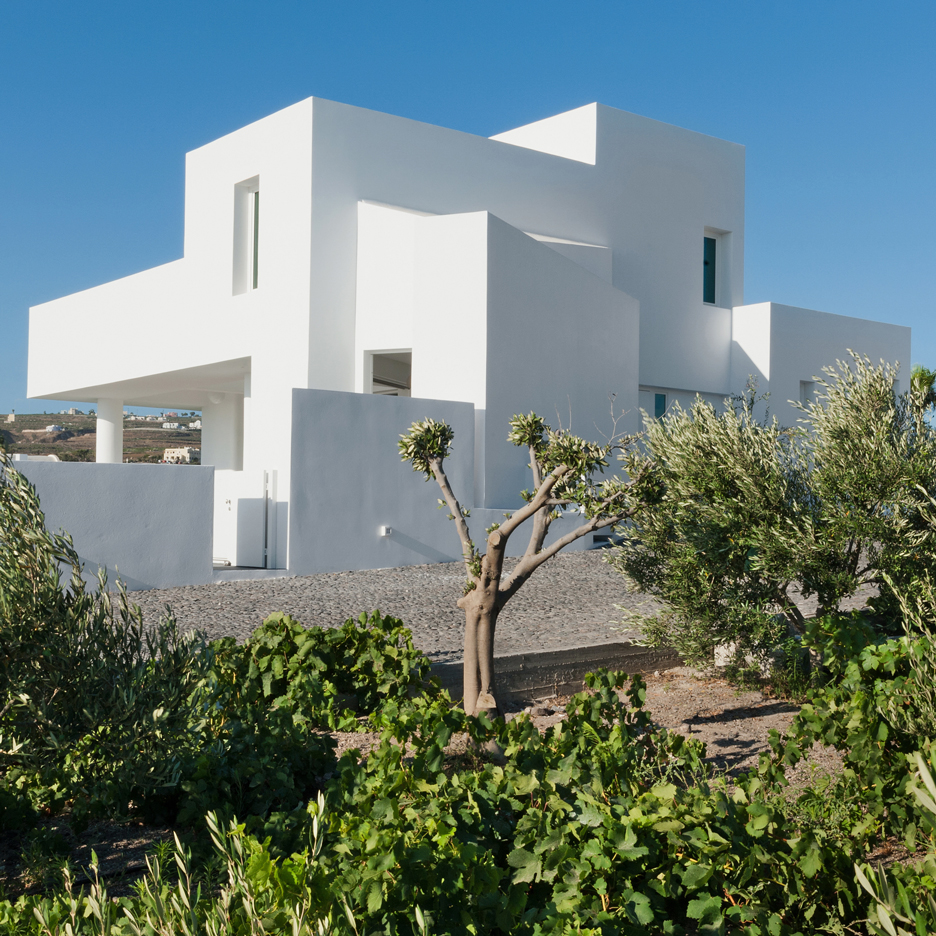 Sitting on a sloping plot outside the village, this house formed of stacked white cubes has views of the sea and a garden where the occupants to grow their own vegetables.

“The form is a synthesis of cubistic white volumes, as a contemporary translation of the traditional cubistic architecture found in the villages of Santorini with a clear influence from Modernism,” explained the architecture studio.

Find out more about Summer House in Santorini ›