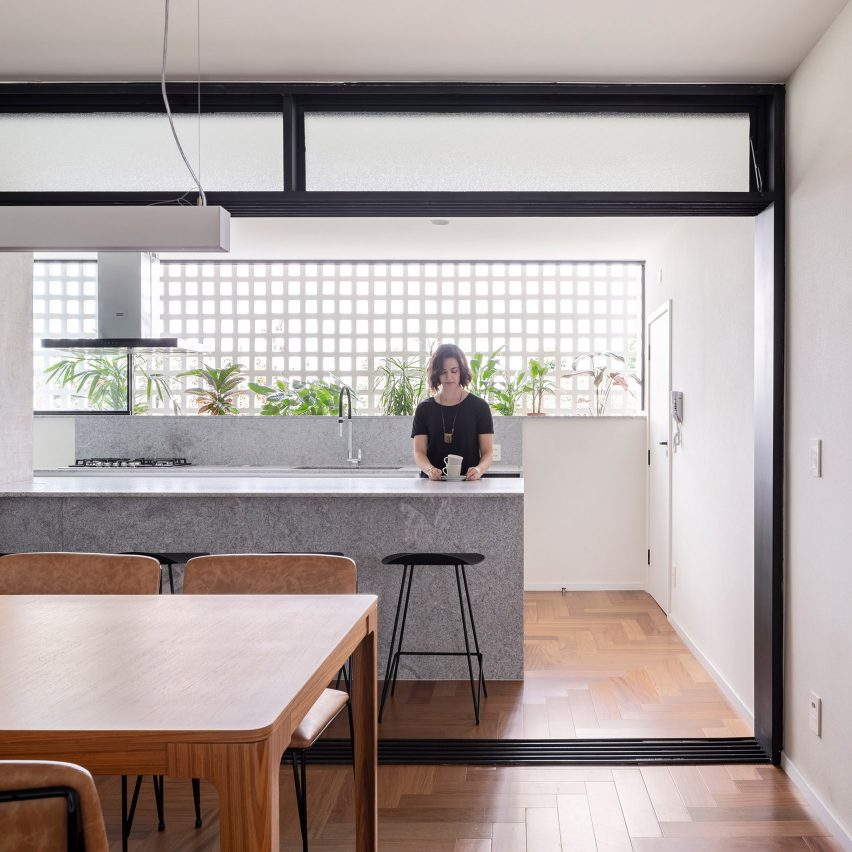 Brazilian studio Bloco Arquitetos has stripped back an apartment in Brasília built in the 1960s and added in translucent glass to reveal the existing concrete block facade.

308 S apartment is located in Brasília’s model superquadra, which is one of the first completed apartment blocks of the urban design plan conceived by architect Lucio Costa and landscape architect Burle Marx. 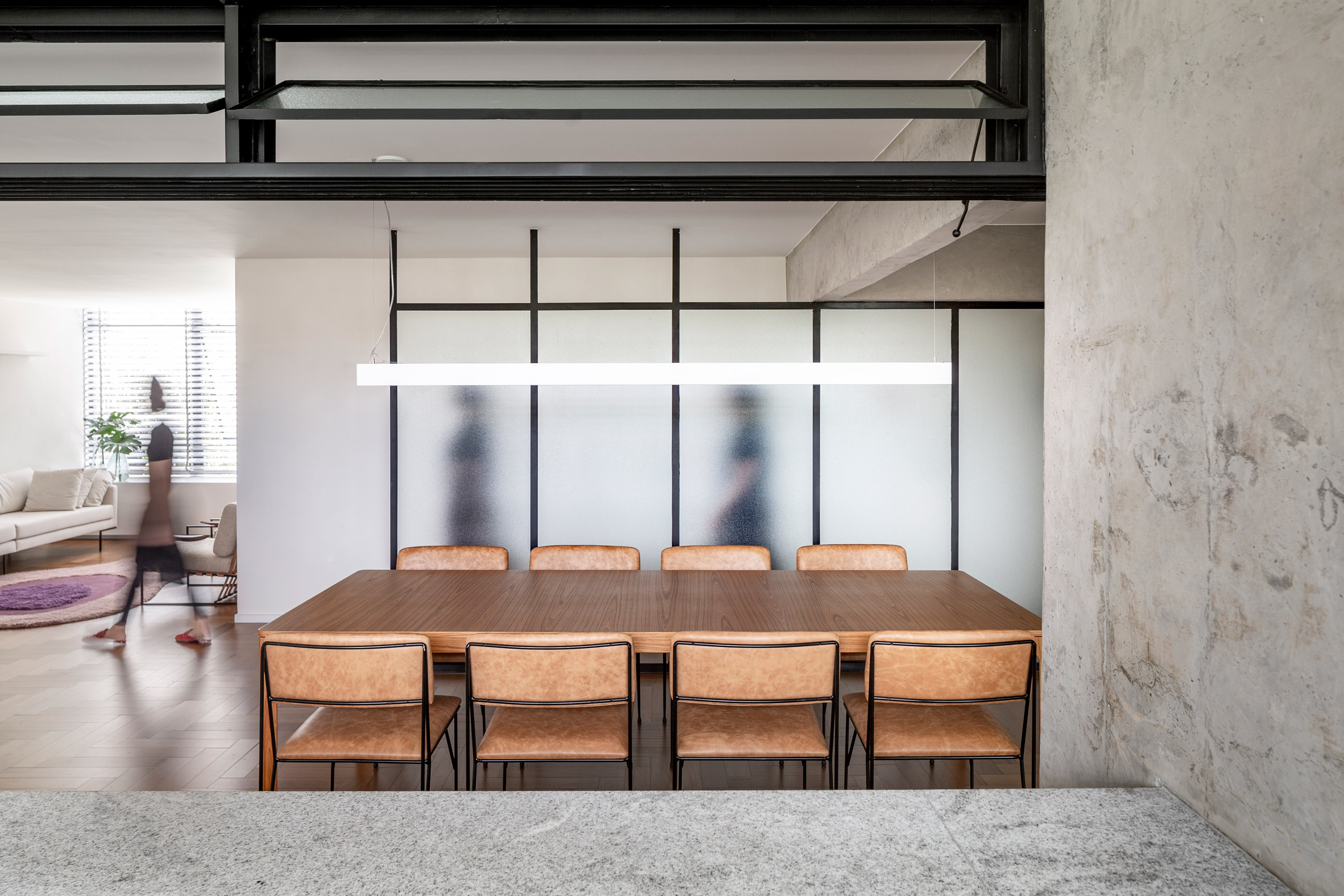 Since it was first built in the 1960s the 154-square-metre, three-bedroom unit has undergone several remodels that changed the apartment’s original finishes and materials.

For this renovation, Bloco Arquitetos concentrated on reconfiguring the layout to open the main living areas to the building’s gridded facade that controls airflow. 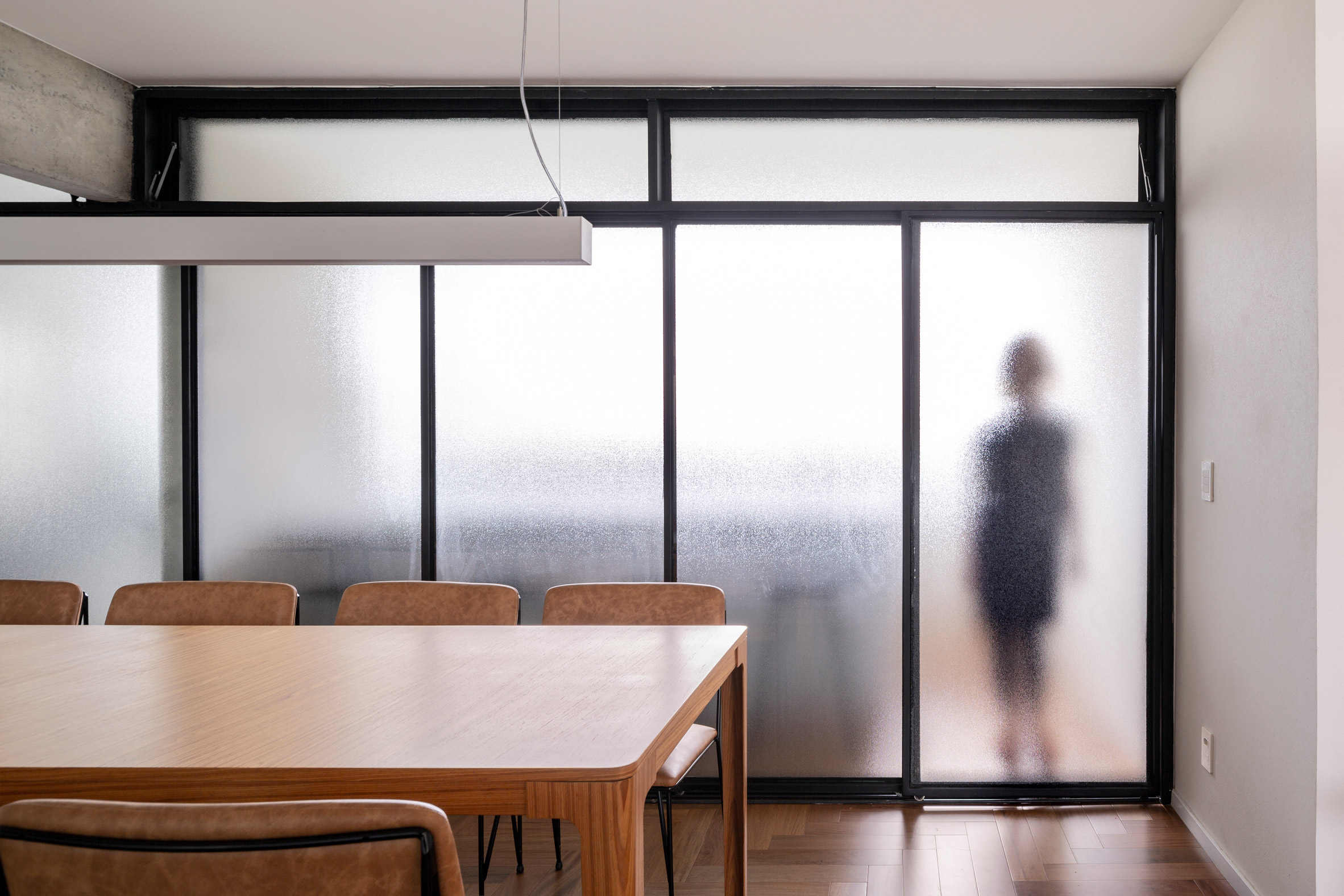 “The main objective was to replace some of the walls and partitions by translucent elements and to directly connect the new dining room, the kitchen and the main bedroom’s private bath to the building’s naturally ventilated facade,” the studio said.

This involved replacing existing walls with a series of translucent sliding glass doors and partitions. They separate the kitchen from the dining and living area and form a hallway leading the bedrooms. Two of the bedrooms were also reduced in size to make room for the open-plan dining space. 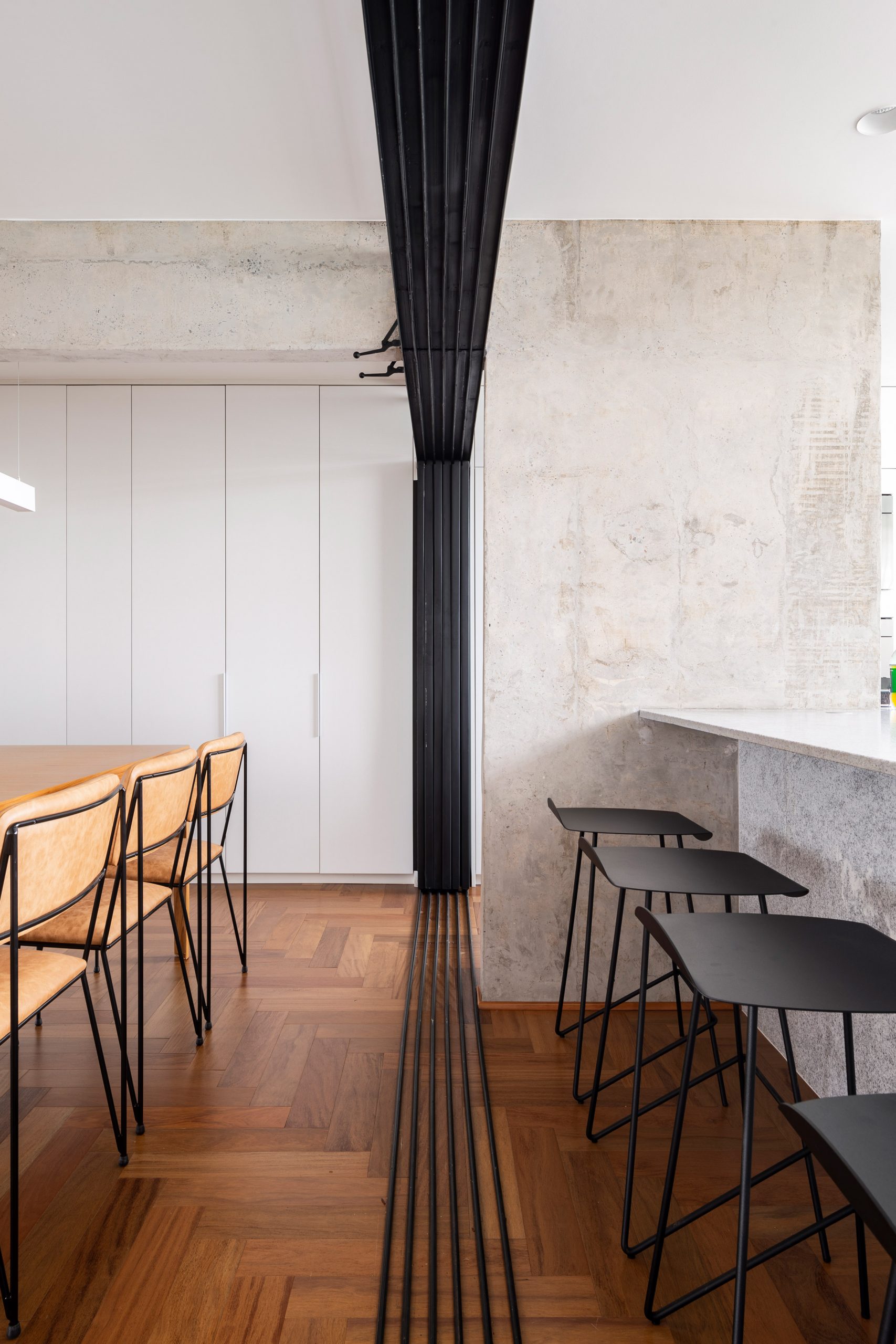 The sliding door is outlined with a black frame and topped with a set of rectangular windows that can rotate to increase airflow within the space.

During the renovation, the studio exposed parts of the original concrete construction and left several of the beams and walls bare. The worn structures are paired with bright white walls and hardwood flooring boards cut in a variety of sizes. 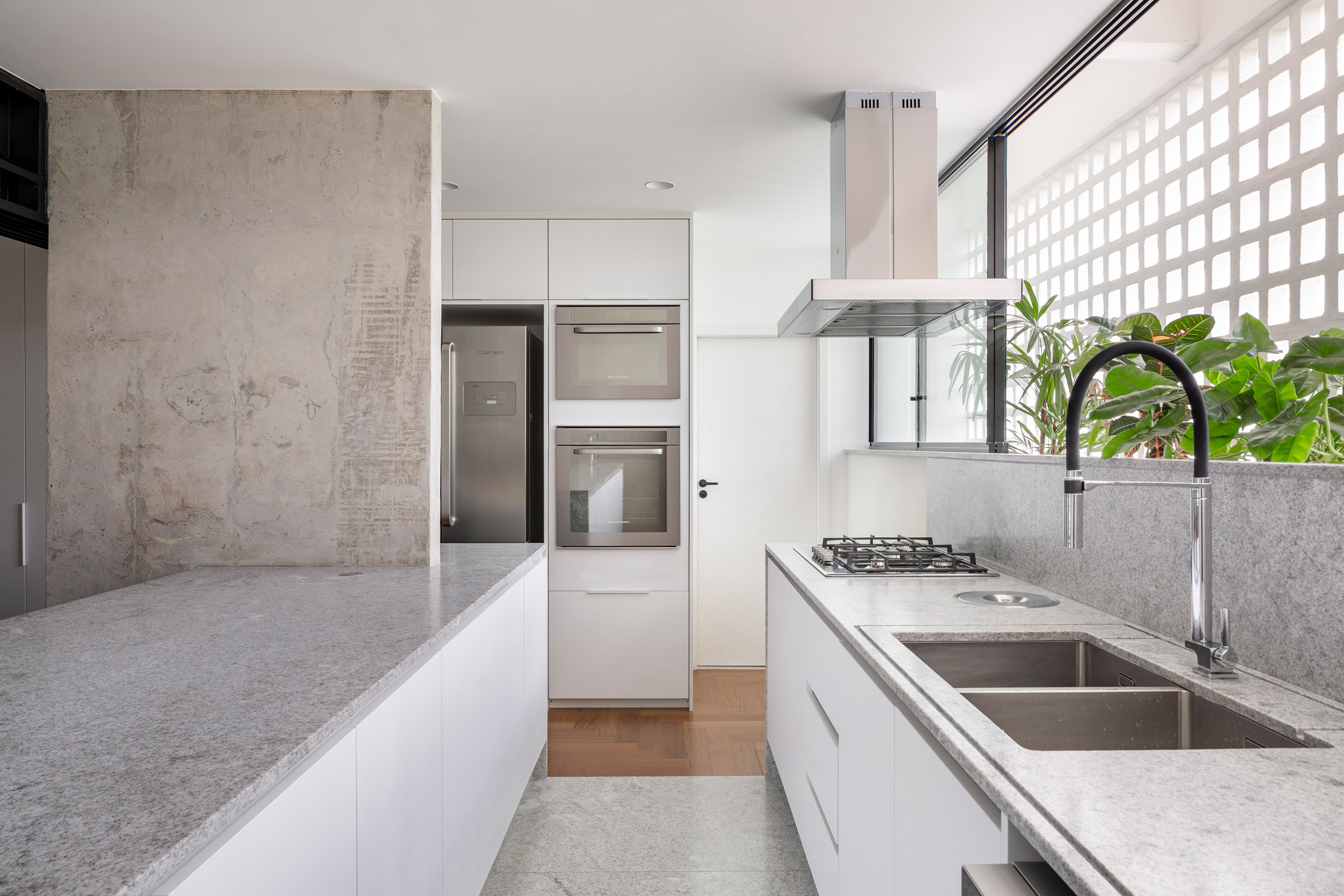 It also restored several sets of mechanical metal blinds, which are original to the apartment, and installed them along the back-facing windows.

A lattice-like wall with square cutouts forms the building’s exterior and spans across the front of the unit where the kitchen and master bathroom are located. The studio has inserted a row of green plants between the facade and the interior wall structure. 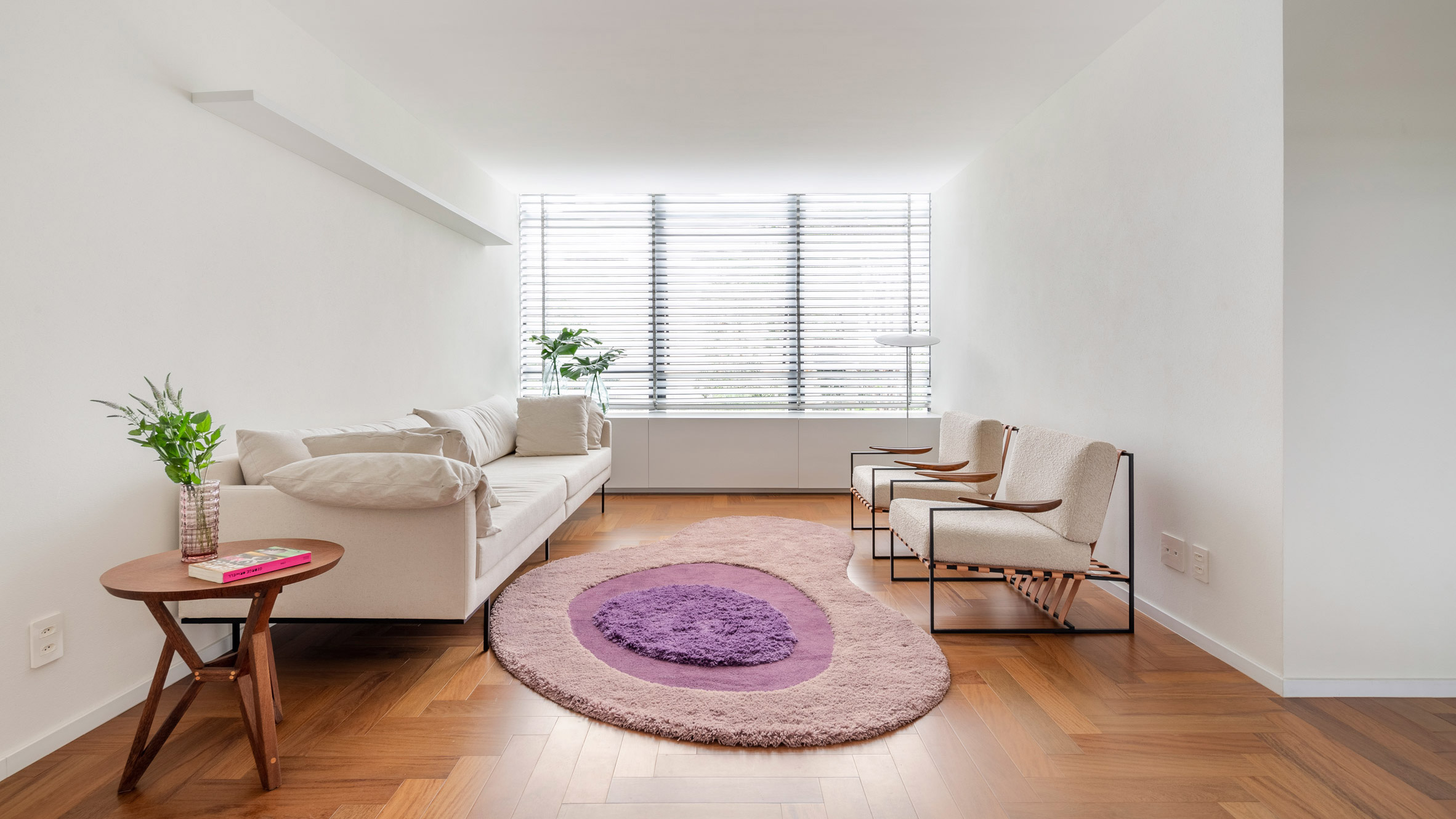 In the all-white kitchen and bathroom the island and vanity counter are cut from Branco São Paulo, a matte-finished granite that the studio has also used as flooring.

Other details like the grey stone and white tiles covering the bathroom walls are intended to reference typical Brasília architecture from the 1960s and 70s. 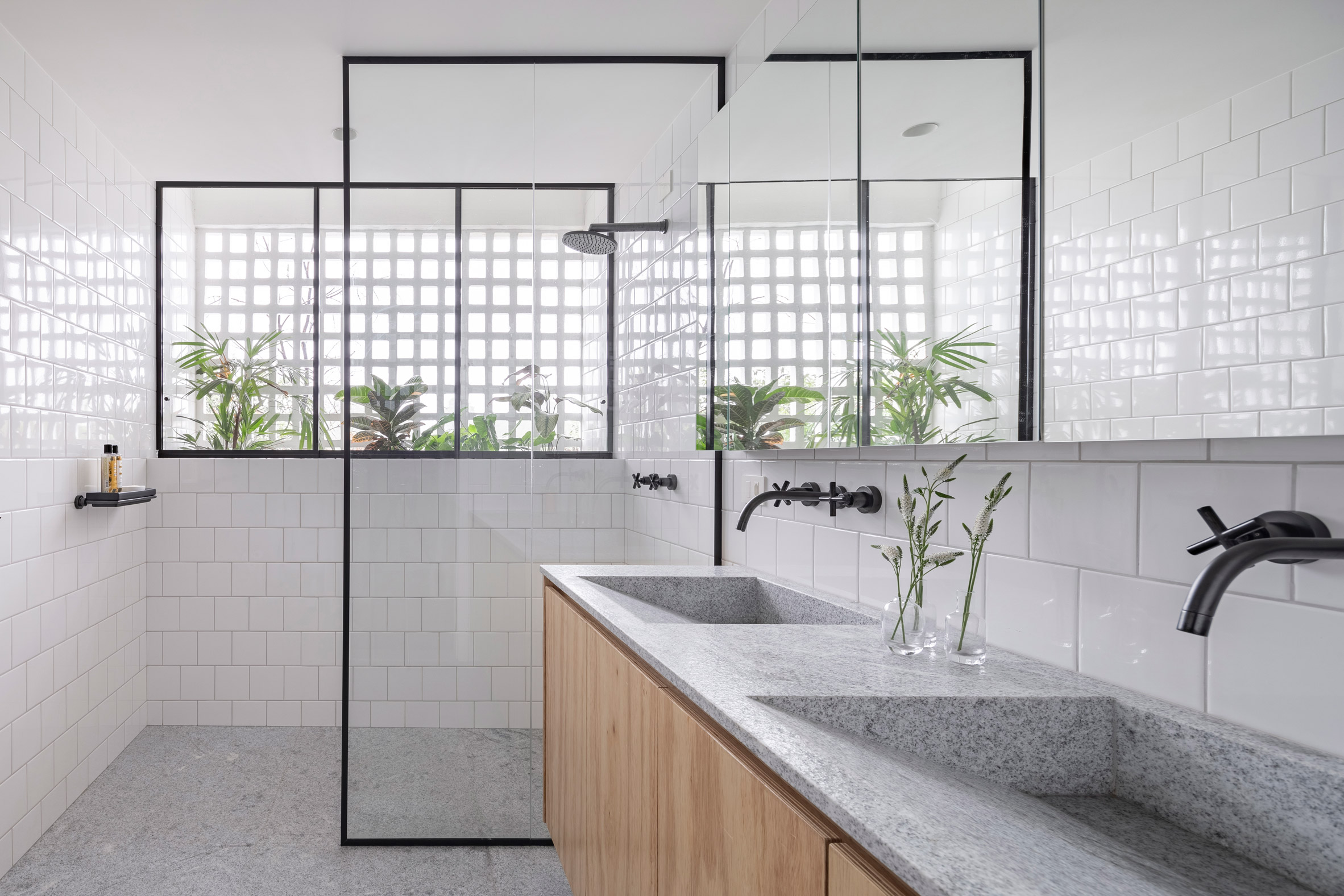 Bathroom vanities are constructed with plywood, while the other wood shelving units and cabinets throughout the apartment are crafted with industrial MDF and finished with matte white paint.

A number of furniture pieces in the apartment were designed by Brazilian creatives. 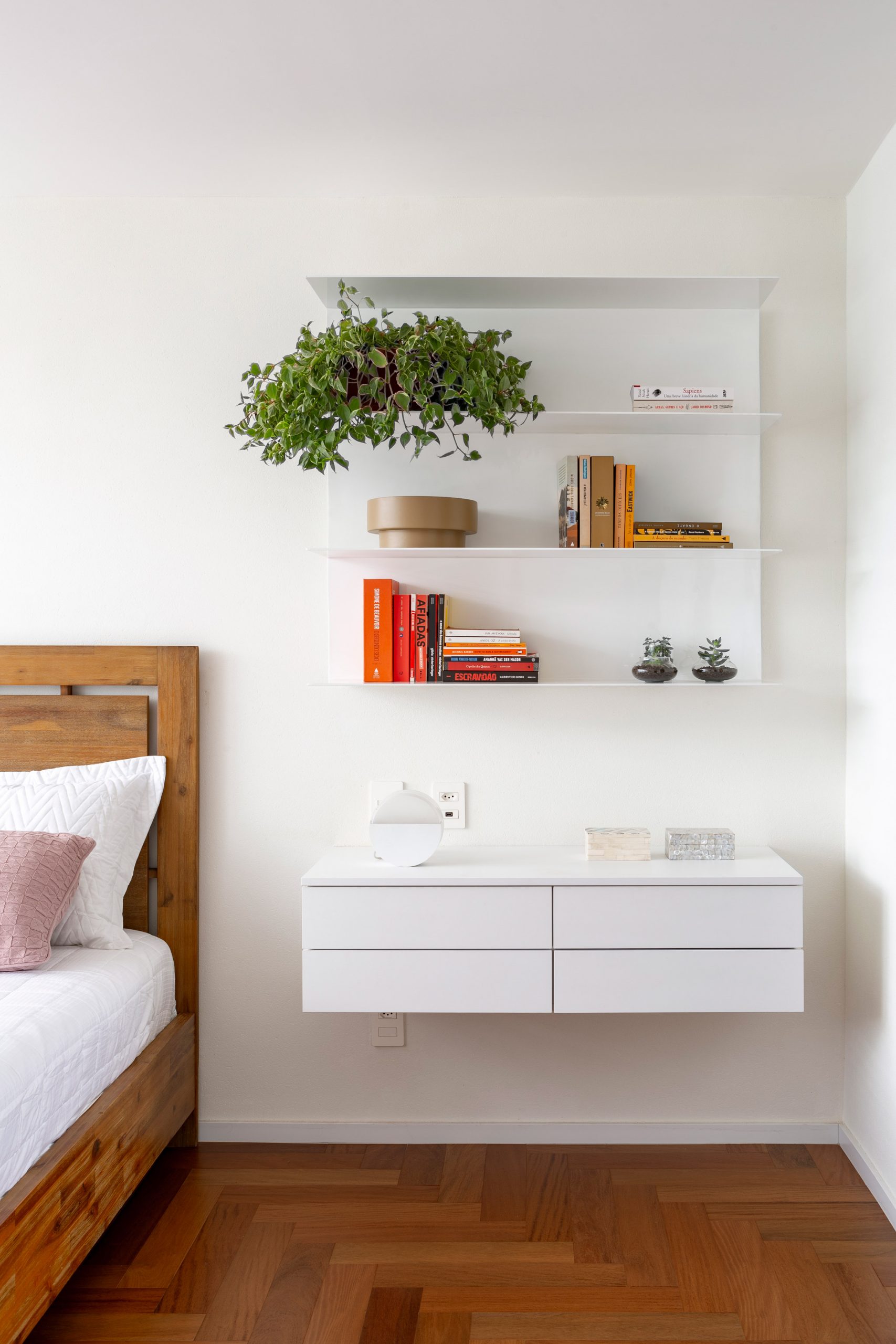 Examples include the circular purple rug in the living room by architect Rodrigo Ohtake, the slender-framed armchairs created by Jorge Zalszupin in the 1960s and the dining chairs and stools from Brazilian furniture brand Cremme.

Bloco Arquitetos founded in 2008 is led by architects Daniel Mangabeira, Henrique Coutinho and Matheus Seco. The studio has completed several residential projects in Brasília including a house with a covered patio supported by 10 concrete structures and a white residence with angular volumes.

Photography is by Joana França.