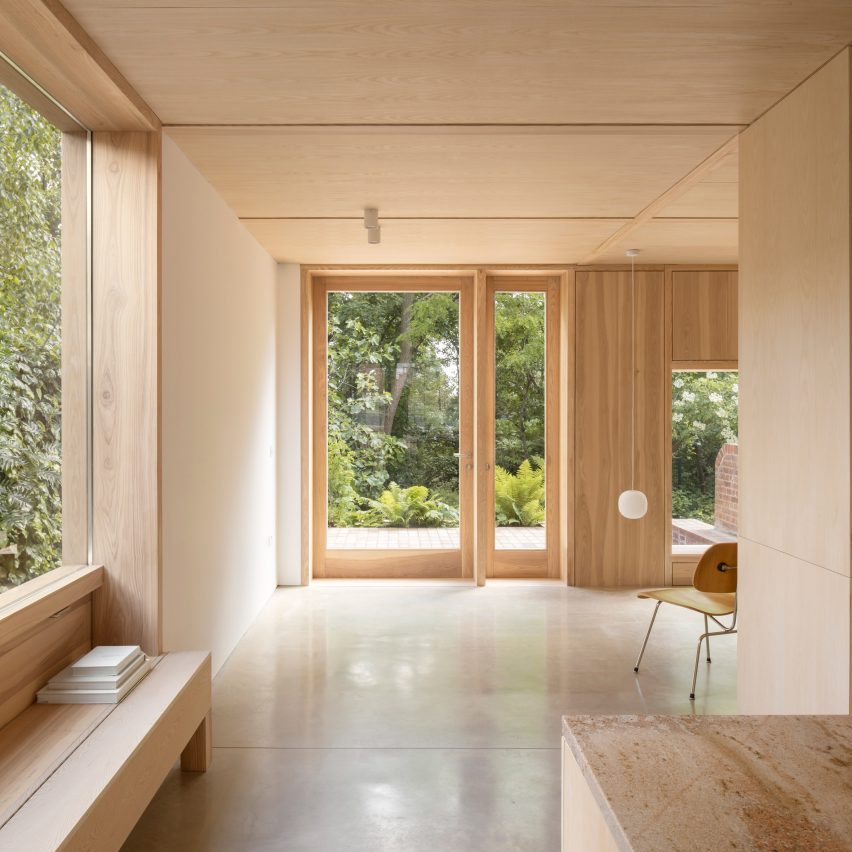 O’Sullivan Skoufoglou Architects has added an ash-lined extension with expansive windows to a gardener’s home in Lewisham, southeast London.

Grove Park is an end-of-terrace house that was originally built back in the 1980s. 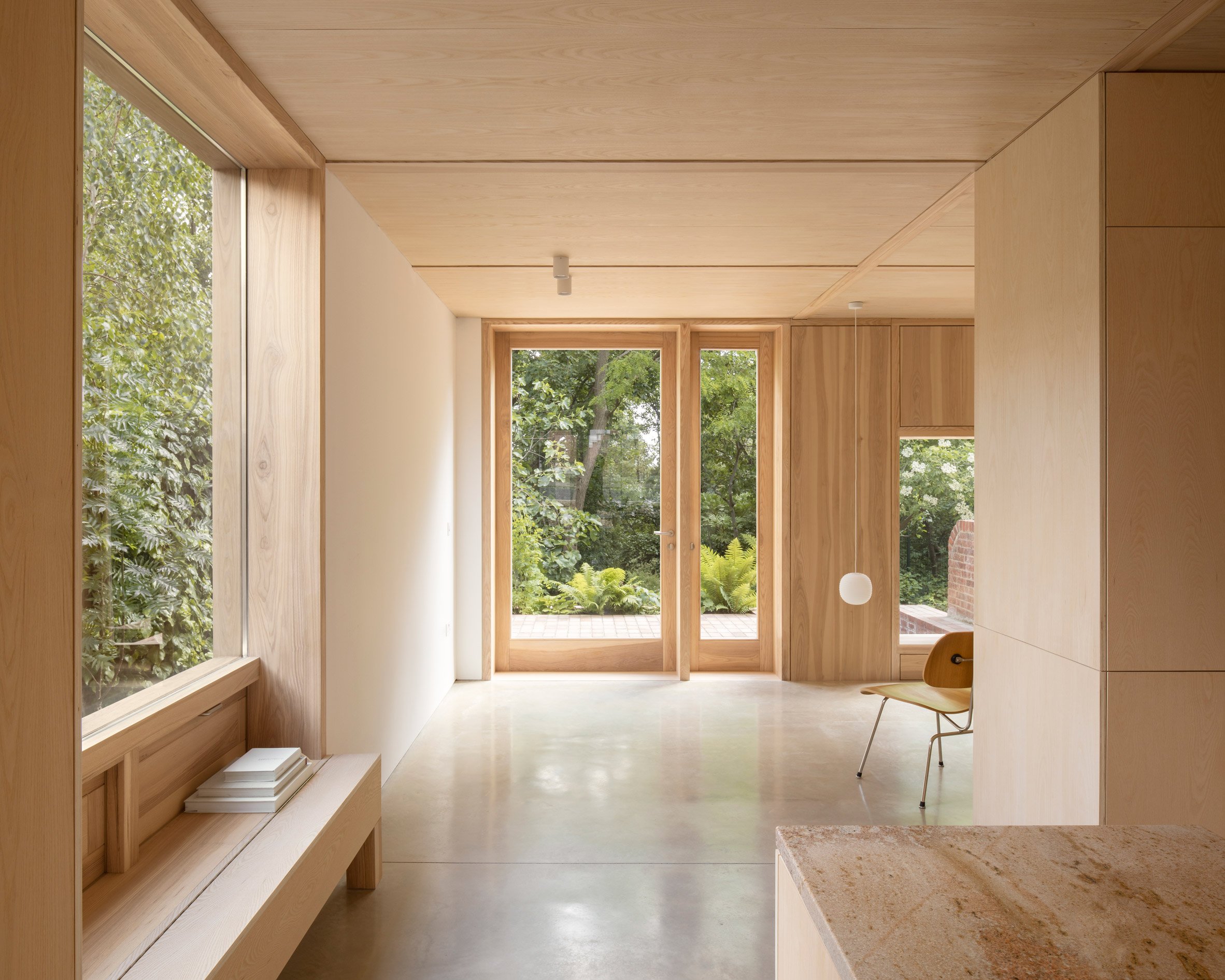 The wood-lined extension that O’Sullivan Skoufoglou Architects has added to the home sits at ground level, incorporating a small garage that was on site.

“The previous ground floor was in real need of repair, with both doors and windows, and the internal cellular, low-ceilinged, cramped and dark layout in bad shape,” studio co-founder Amalia Skoufoglou told Dezeen. Inside, the extension accommodates a kitchen, a dining area that faces the street and a lounge which has been orientated towards the garden and the wild woodland that lies beyond.

This was done at the request of the client who, being a keen gardener, wanted living spaces to have a close visual connection with the outdoors. The ceiling of the extension is supported by a full-length ash flitch beam – a type of beam typically used in the construction of timber structures, which comprises a central steel plate sandwiched between two wooden panels.

Shorter ash struts extend perpendicularly from the central beam to form a series of rectangular openings.

These have been filled with ash wood panels that were prefabricated off-site, along with the extension’s window frames and doors. 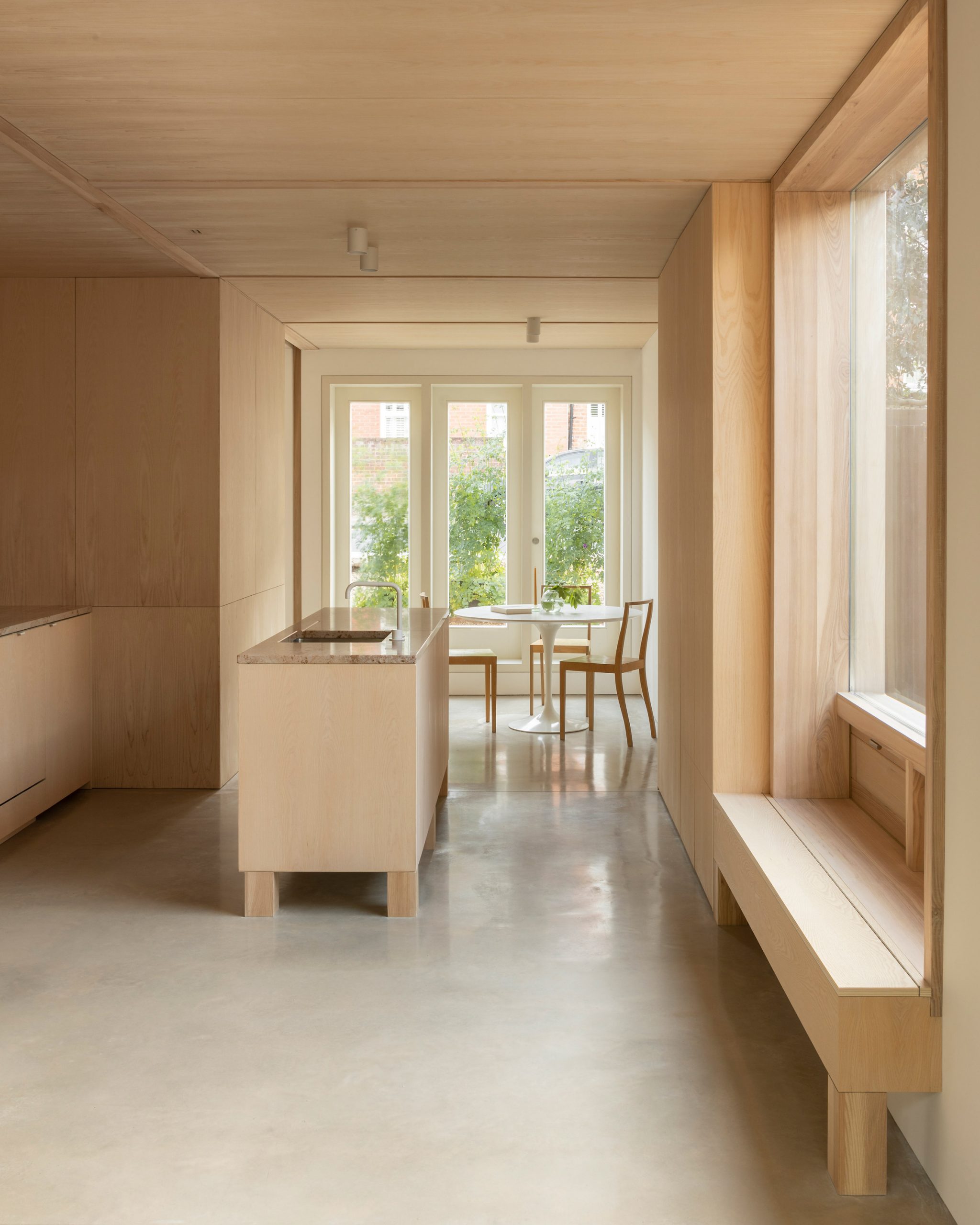 “The interior spaces during the summer are surrounded by heavy foliaged trees and cast dark shadows on the interiors,” explained Skoufoglou.

“Both maple and ash were considered at the outset for their light appearance and veining. Ash won out in the end because the external timber panelling and doors were made in Lithuania and ash is more readily available.” 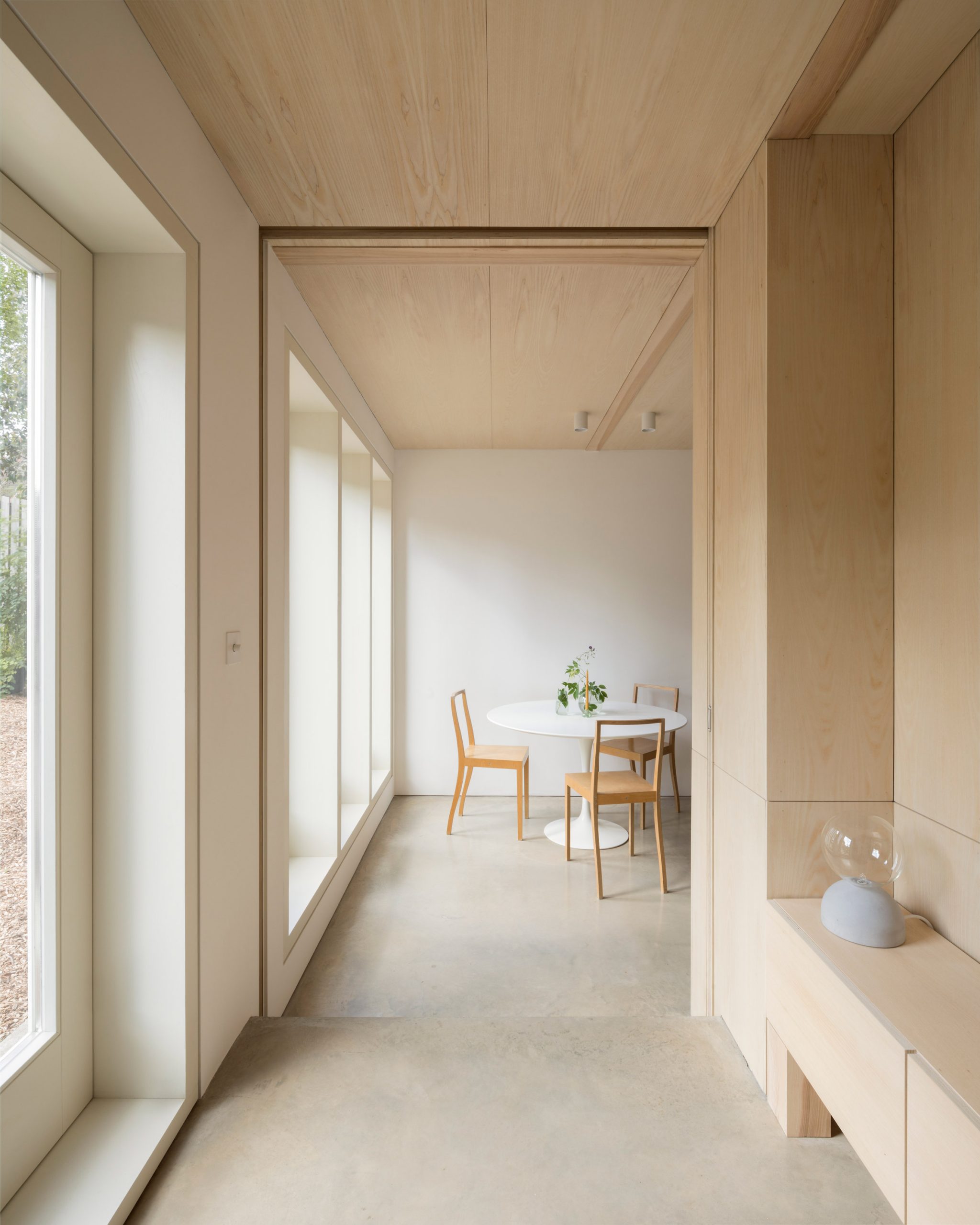 Ash-veneered plywood has then been used to craft the storage cabinetry in the kitchen and the central breakfast island.

Countertops and the splashback running behind the stove are made from creamy Shivakashi granite. The flooring throughout the Grove Park extension is polished concrete, which was cast in-situ. 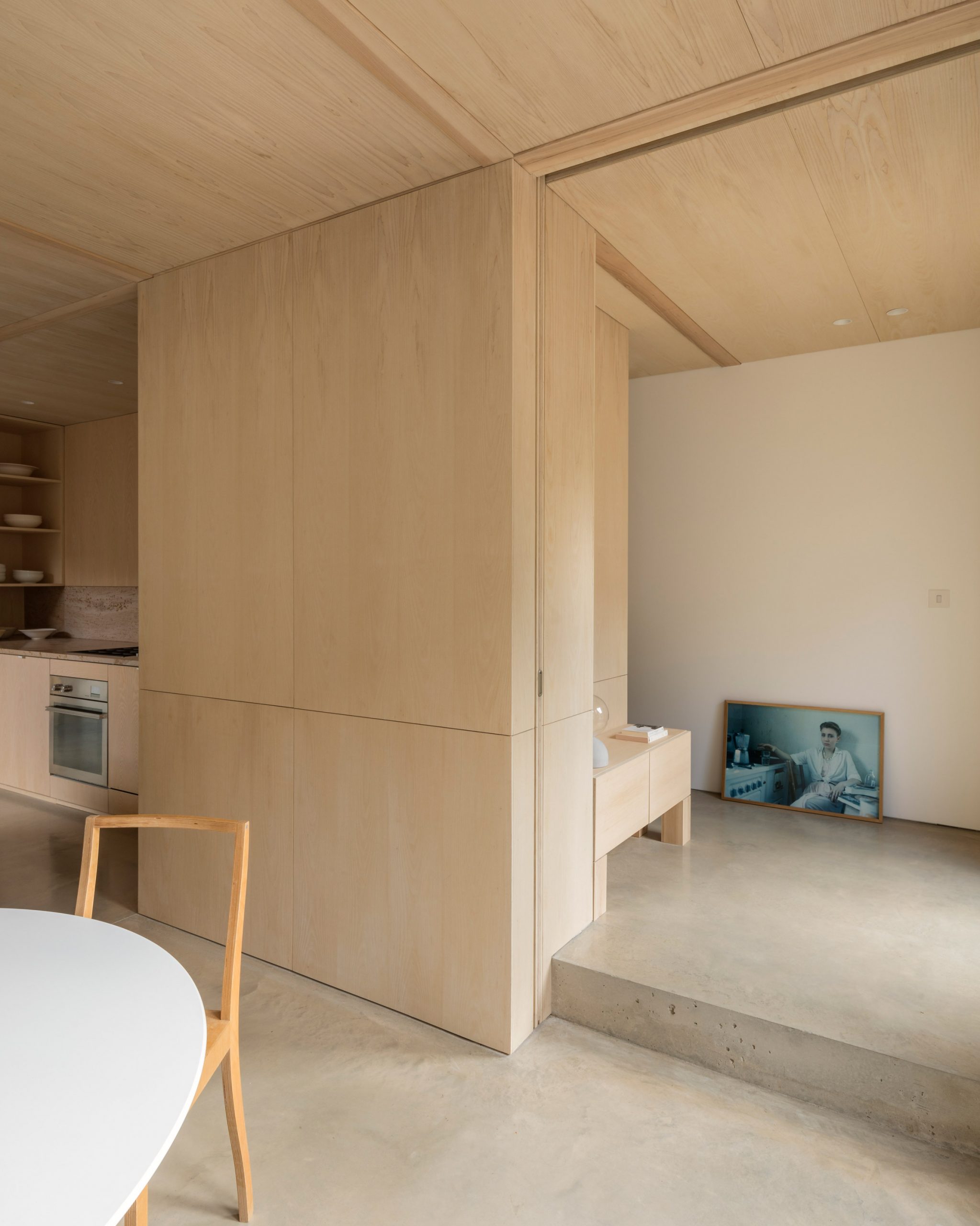 To reveal another perspective of the garden and bring in additional natural light, a huge picture window has been created in the wall opposite the kitchen.

It has a deep-set frame where a comfy seating nook has been built in. Another picture window features in the ash-lined front wall of the extension’s lounge area, which is dressed with a tan-leather sofa and simple spherical pendant lights.

Large panels of glazing have also been inset in the door. 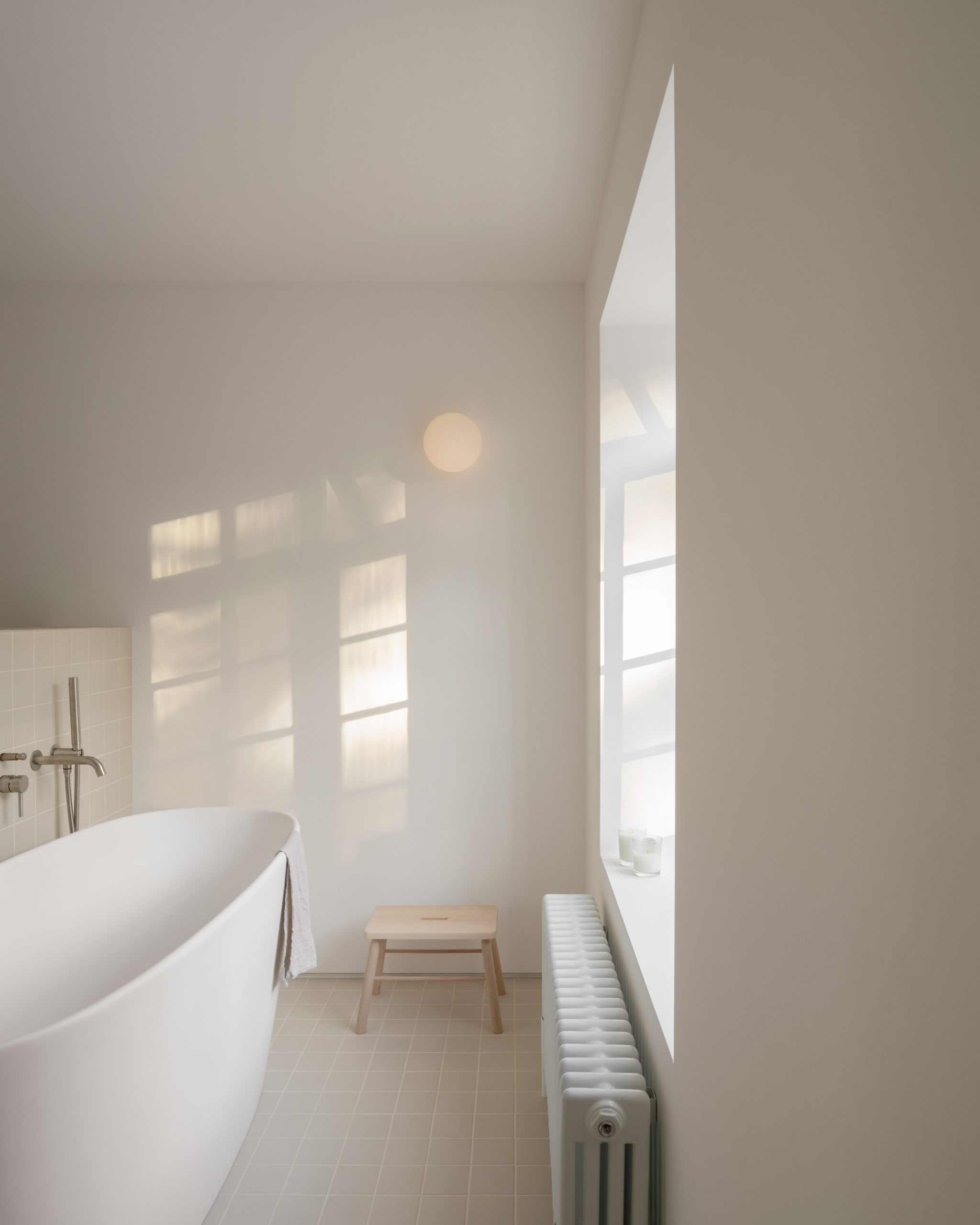 The project additionally saw the studio create a large master bedroom on the first floor of Grove Park house. It has its own en-suite, which has been finished with a freestanding tub and soft-beige tiling.

A stepped terrace has also been built in the back garden, made from red bricks to match the facade of the house. 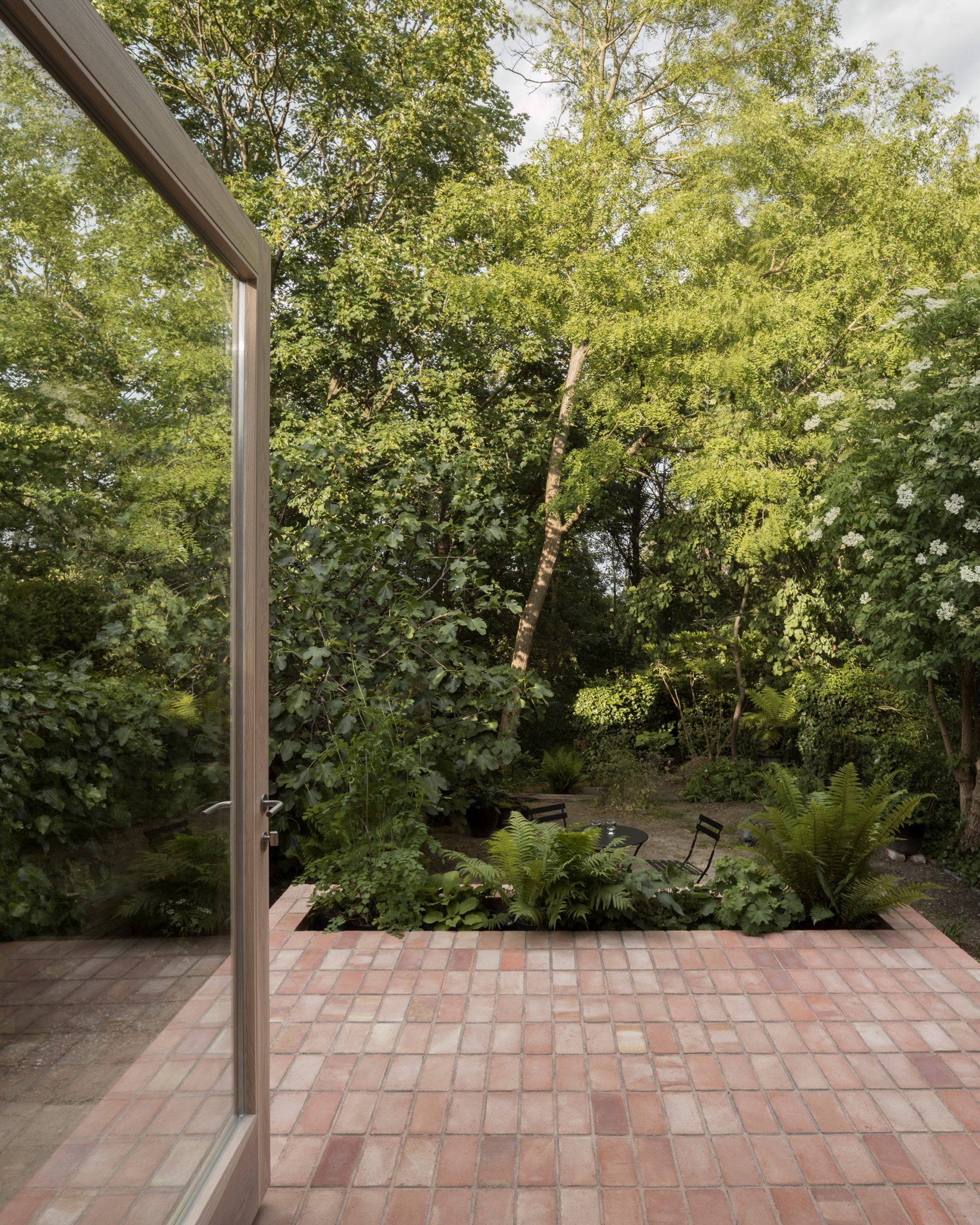 O’Sullivan Skoufoglou Architects was founded in 2016 by Jody O’Sullivan and Amalia Skoufoglou.

The studio often uses wood in its work. Three years ago it created an extension for a home in northwest London, which featured oak louvres protruding from its front window. In 2018, it also decked out a skincare store in the English town of Stamford with ash and cane wood.

Photography is by Ståle Eriksen.