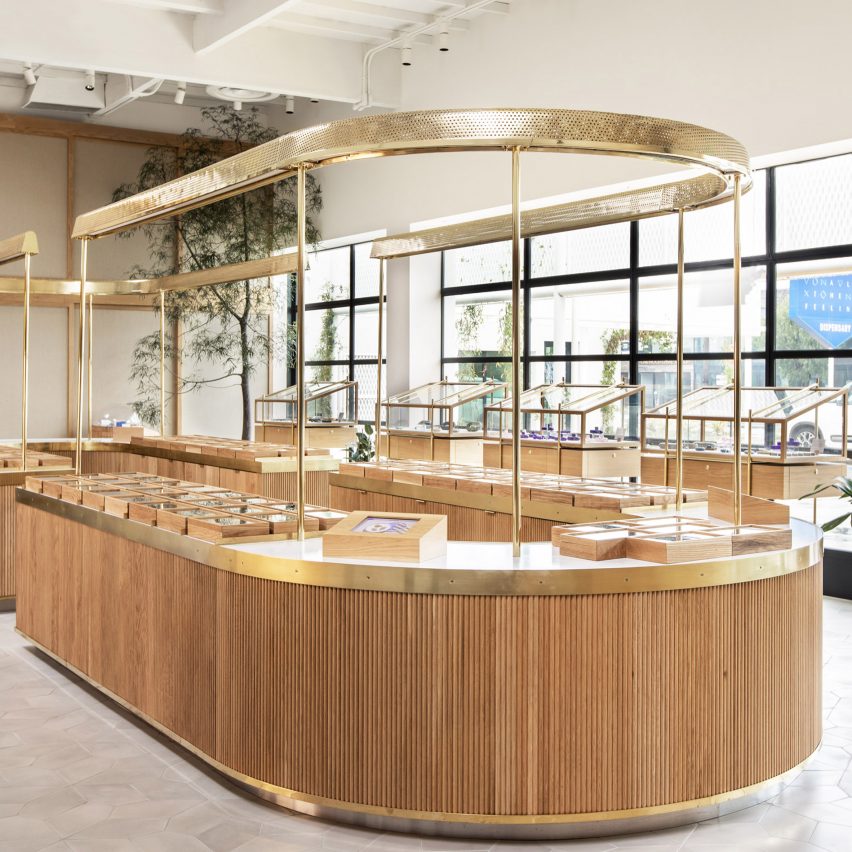 Oak and brass display cabinets fill this cannabis dispensary in Los Angeles that local studio Commune designed to look like a jewellery store.

Commune designed the store for Portland brand Serra that sells and produces cannabis products, from caramel treats to pre-rolled joints. 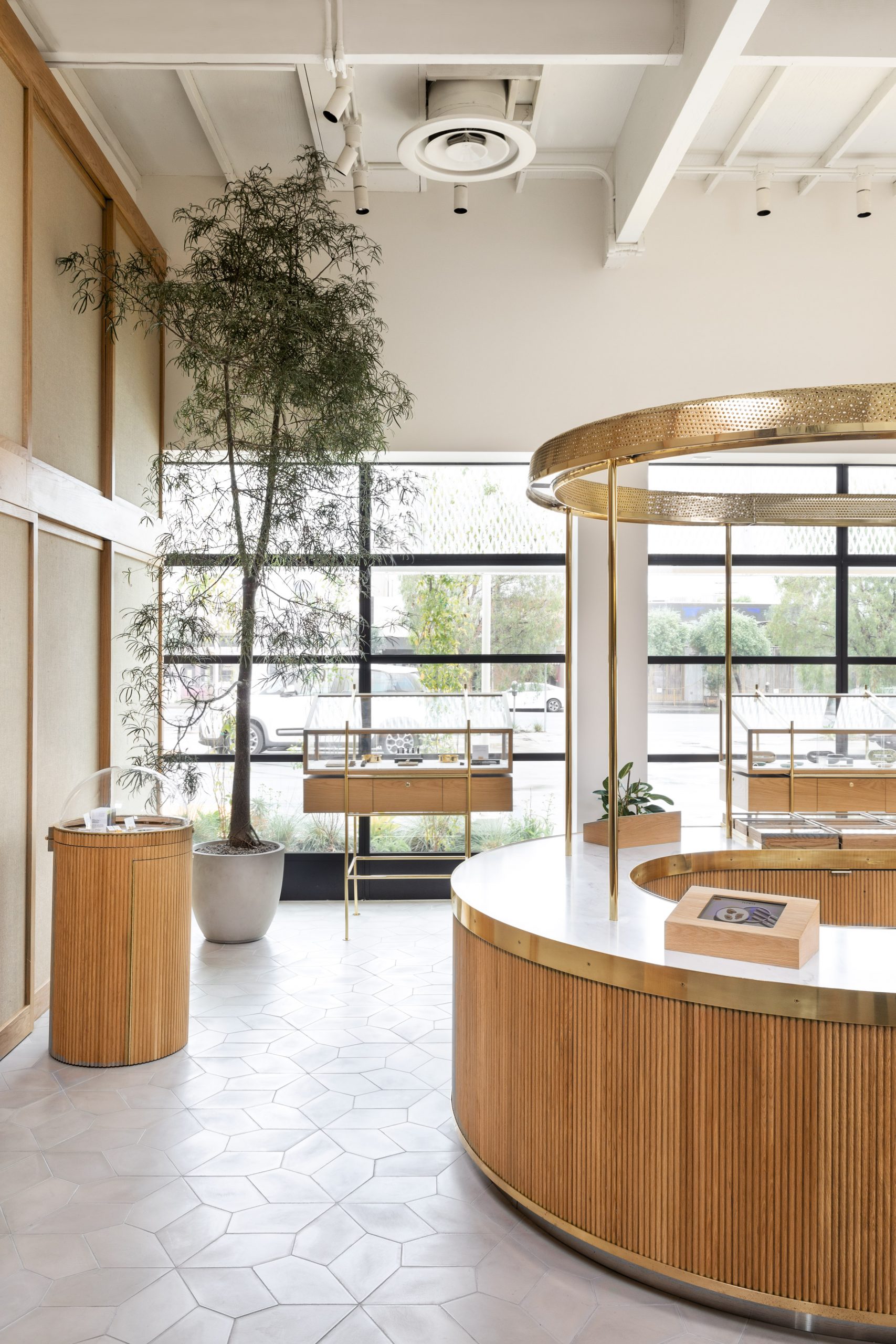 Serra, whose Portland flagship was designed by OMFGCo and JHL Design, tasked Commune to create a Los Angeles store with a similar palette of white, cream and pale wood.

Located in a former car garage on West 3rd Street in the Beverly Grove area, the shop has floor-to-ceiling windows with black frames that usher light inside. 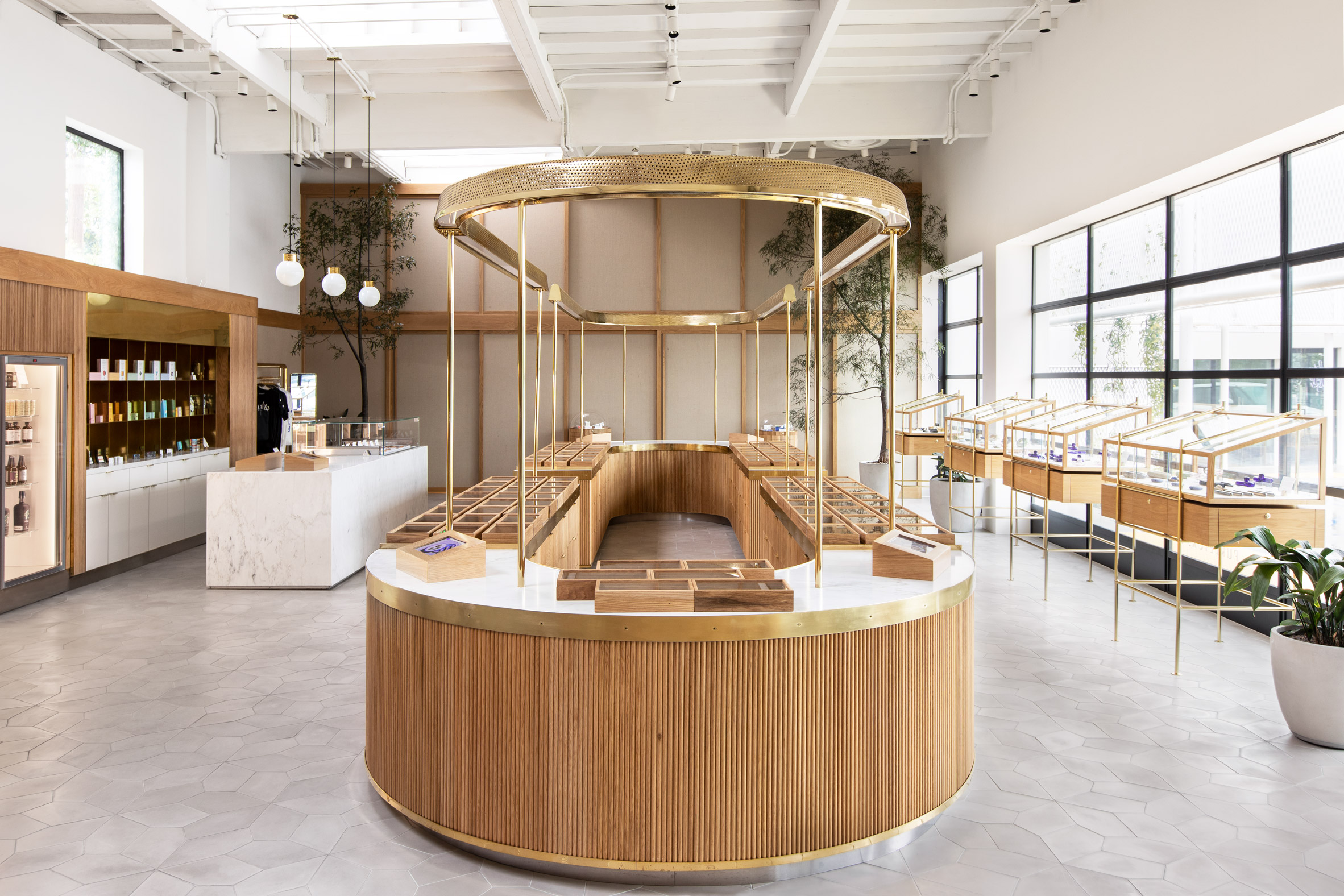 The space was stripped down, revealing wood beams that are now painted white. Commune then designed a series of display cabinets for showing items for sale.

“The interior is meant to say jewellery store rather than a dispensary,” the studio said. “The result is light, airy and luxurious, yet casual… like Los Angeles.”

A focal point of the interiors is an oval-shaped oak counter with rod-like Tambor detailing, which conceals drawers on the opposite side. Slender brass rods on this flower bar support a wrap-around mesh trellis overhead in the same golden material. 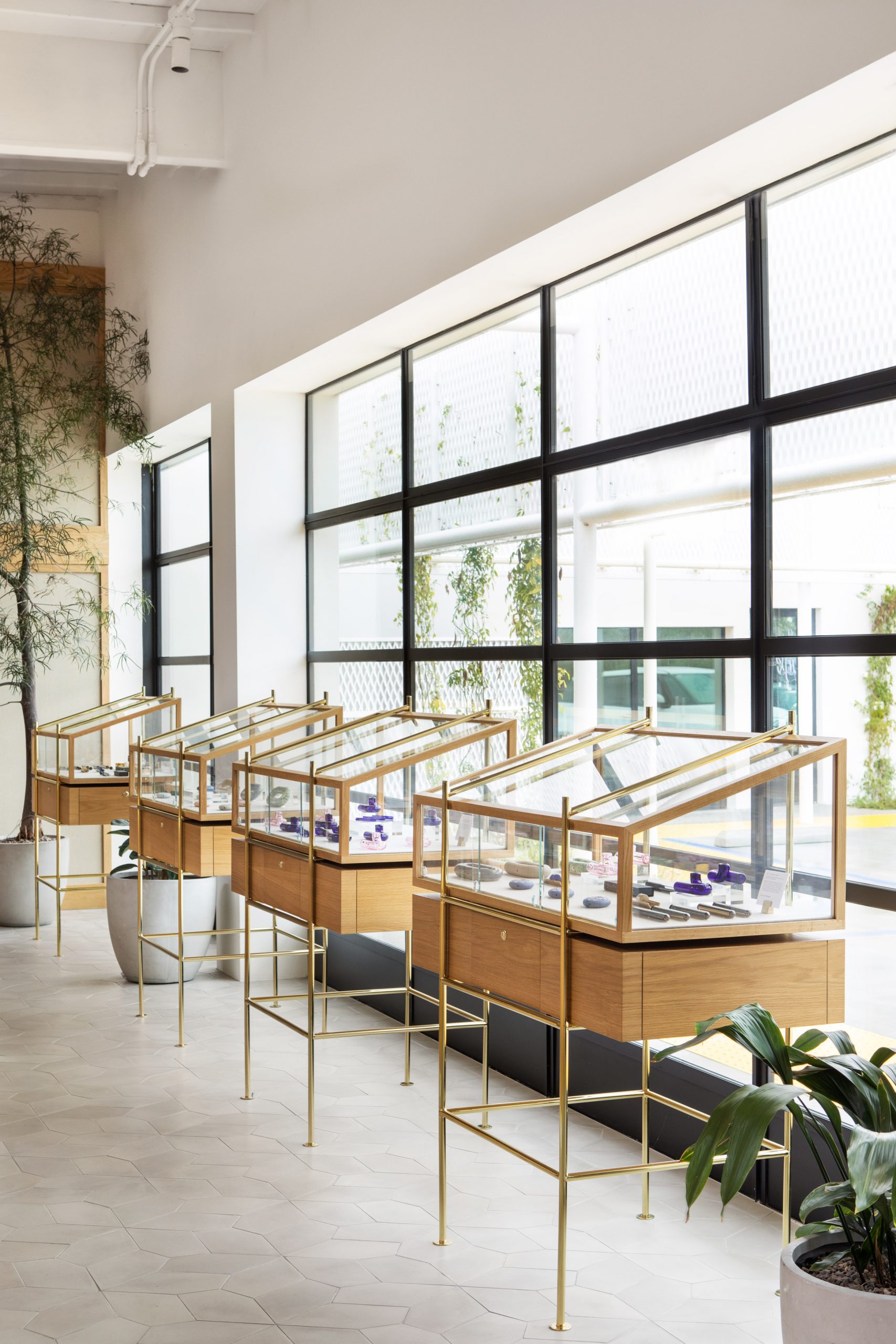 “The store is laid out like a mini speciality store with areas for topicals, edibles, vapes, clothing and accessories with a central racetrack-shaped ‘flower bar’ showcasing the brand’s extensive strain offerings,” said Commune. 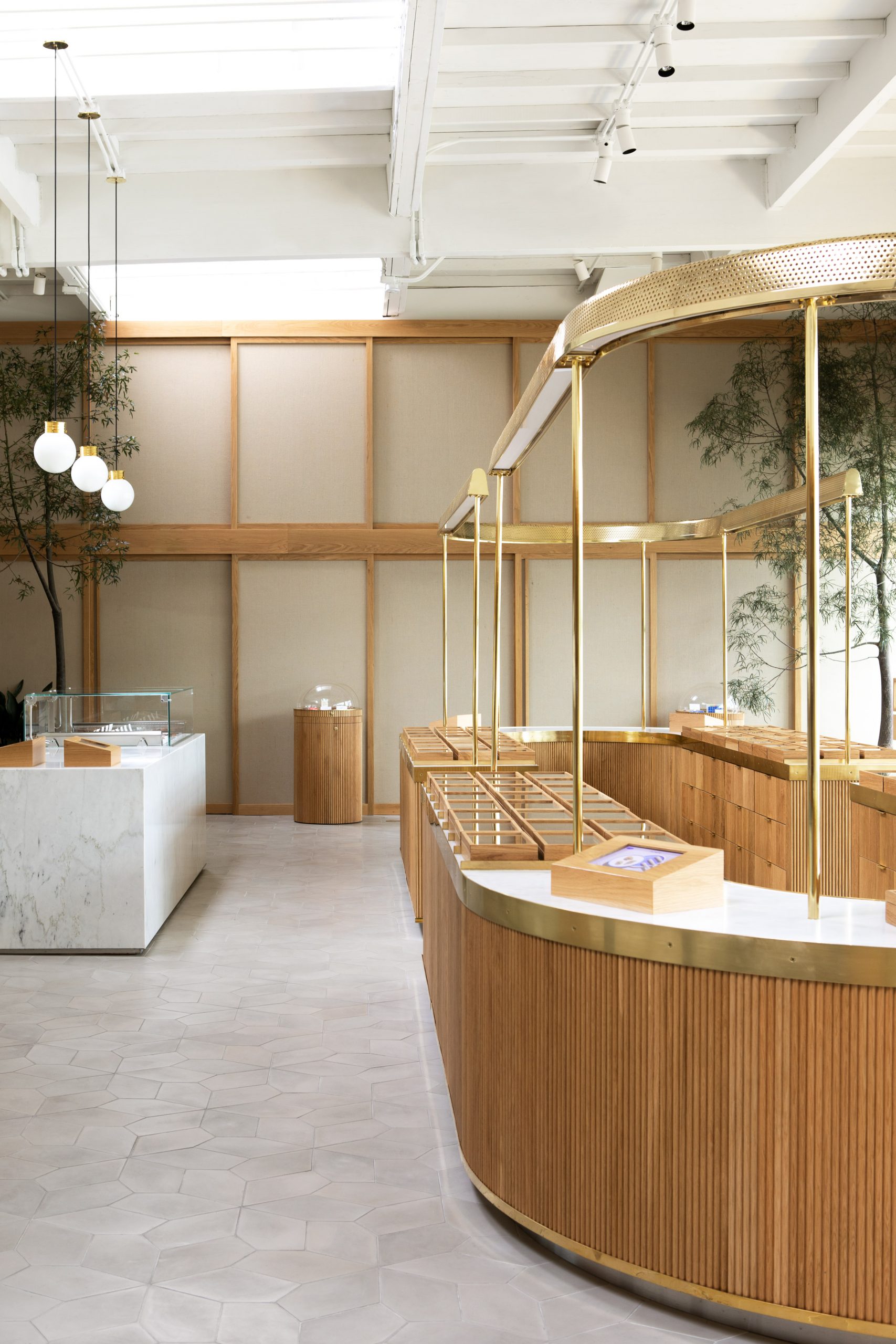 Carrara marble clads another counter that is placed in front of storage cubes, also in brass, and filled with cannabis products. A refrigerator with beverages is next to it. 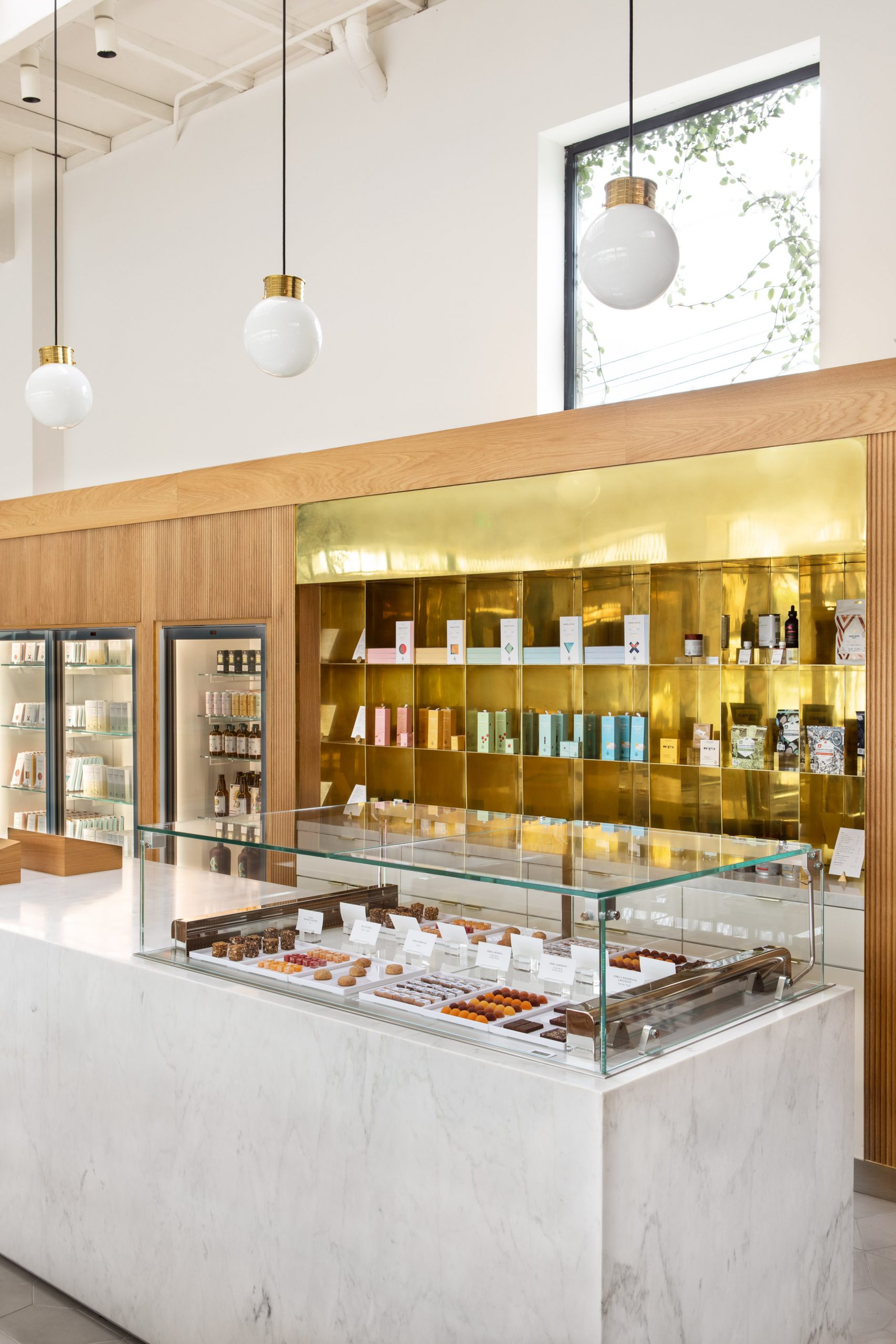 Dispensaries are facilities that sell marijuana for medical or recreational use and are only located in US states that have voted for it to be legal. California became the first state to legalise medical marijuana in 1996. Another cannabis store in Los Angeles is Dosist, which features white slatted walls inside and out. 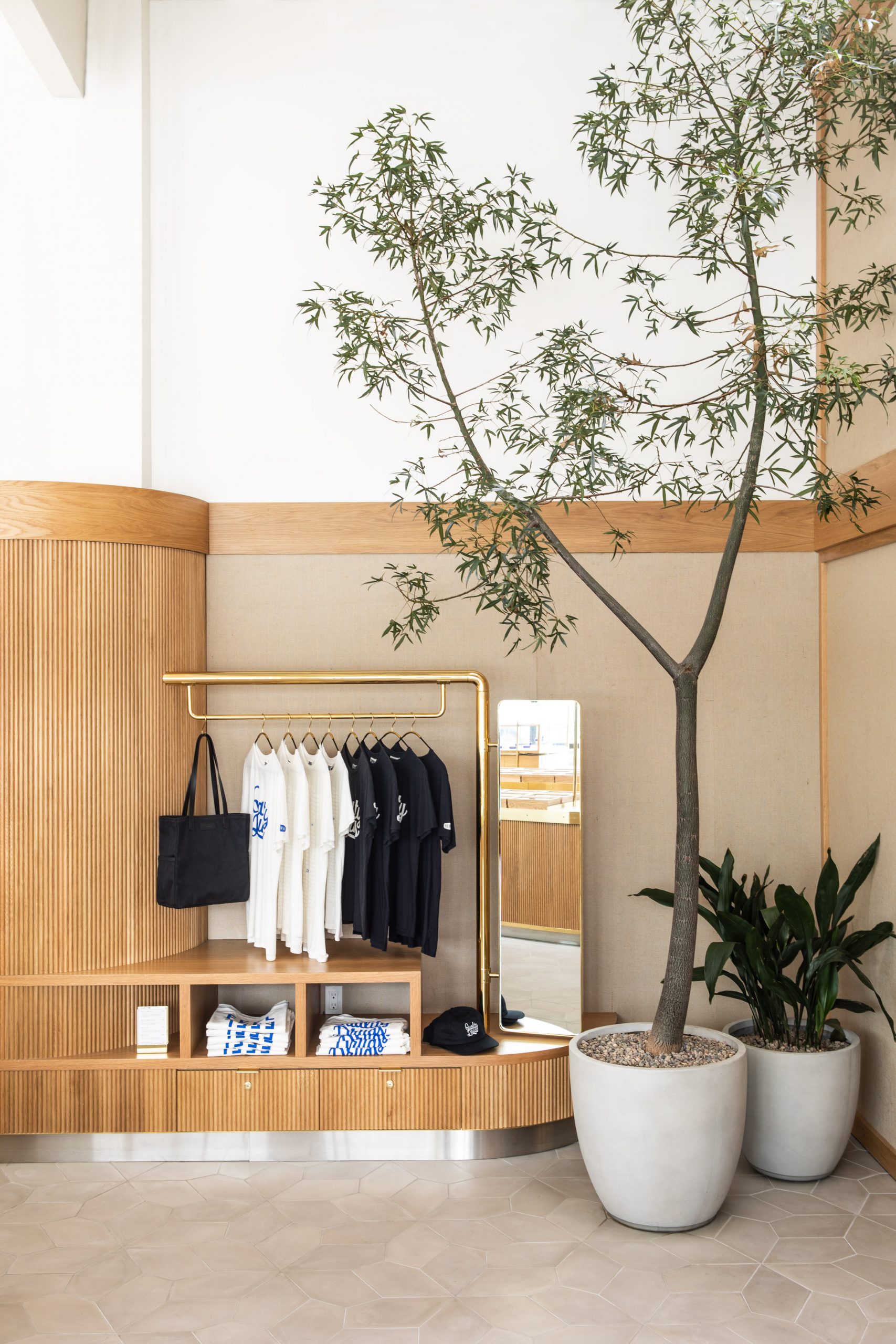 Commune was founded in 2004 by sister and brother duo Pamela and Ramin Shamshiri with Roman Alonso and Steven Johanknecht. In 2016, the Shamshiri siblings left Commune to launch Studio Shamshiri. Its other projects in Los Angles include Hollywood apartment complex El Centro and Ace Hotel in downtown.

Photography is by Laure Joliet.

The post Commune designs Serra marijuana dispensary in Los Angeles to be airy and luxurious appeared first on Dezeen.