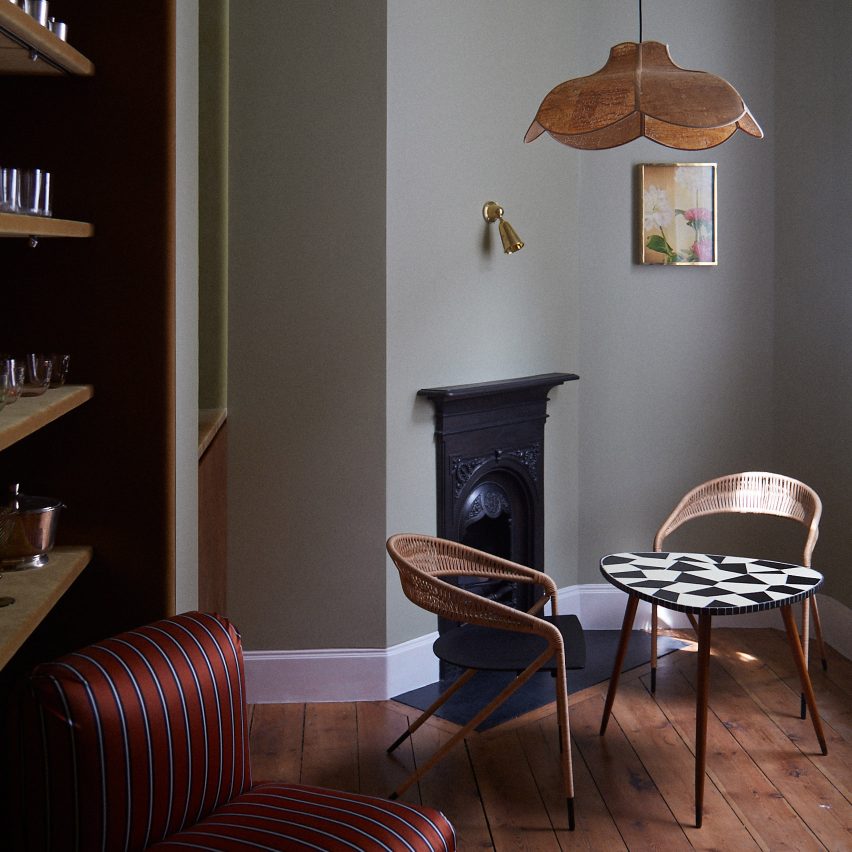 Gabriel Chipperfield has created an “Alice in Wonderland”-style warren of luxurious rooms behind Shreeji newsagents in central London.

The shop was set up by Sandeep Garg in 1982, and has since become a go-to spot for locals to pick up sweets, snacks and find an international roster of magazines. 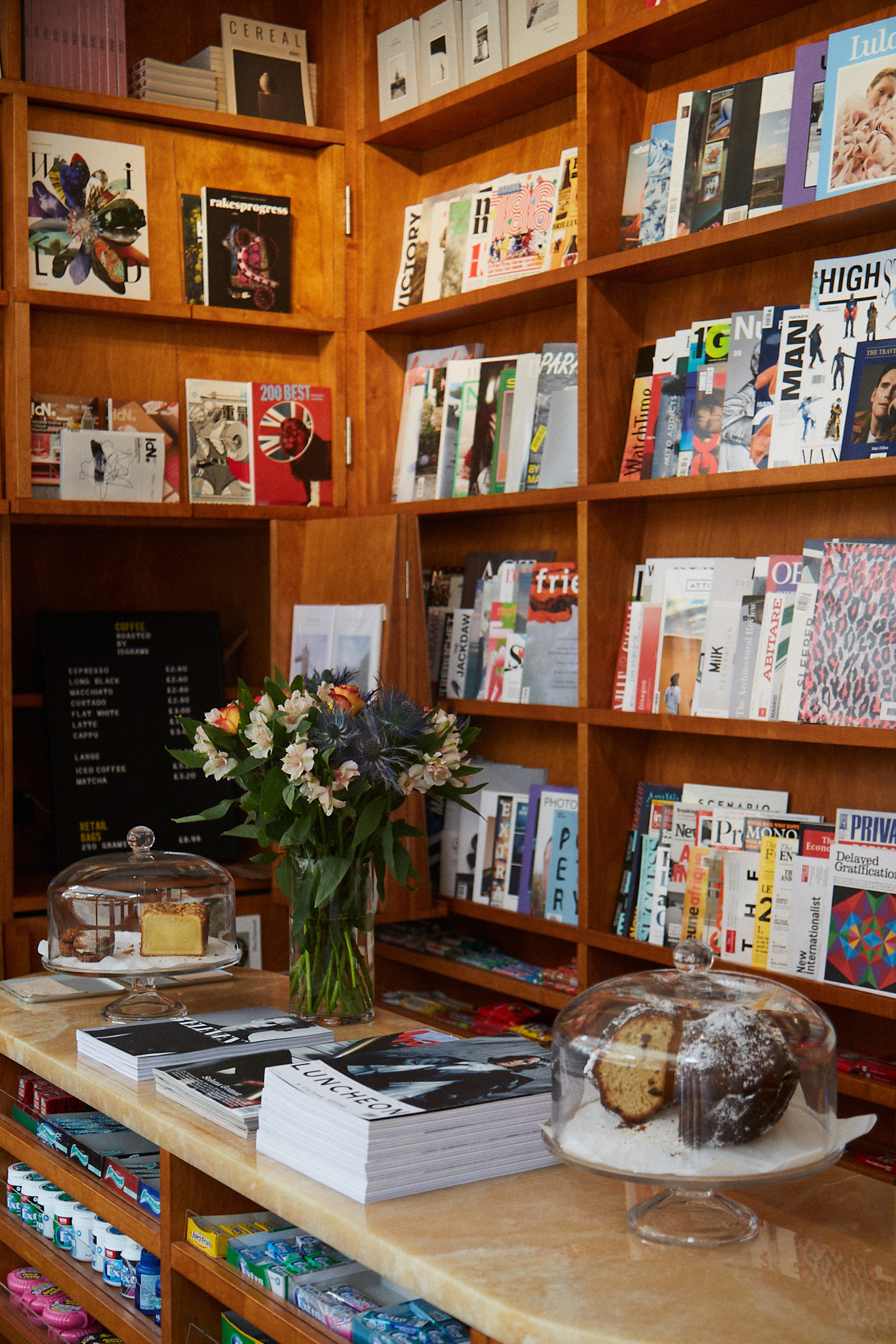 However, over the years, Shreeji had grown tired in appearance so architect Gabriel Chipperfield – son of David Chipperfield –was tasked with refreshing the shop.

He set about fashioning a multifunctional space that better utilised the dormant rooms that lay towards the rear of the floor plan. 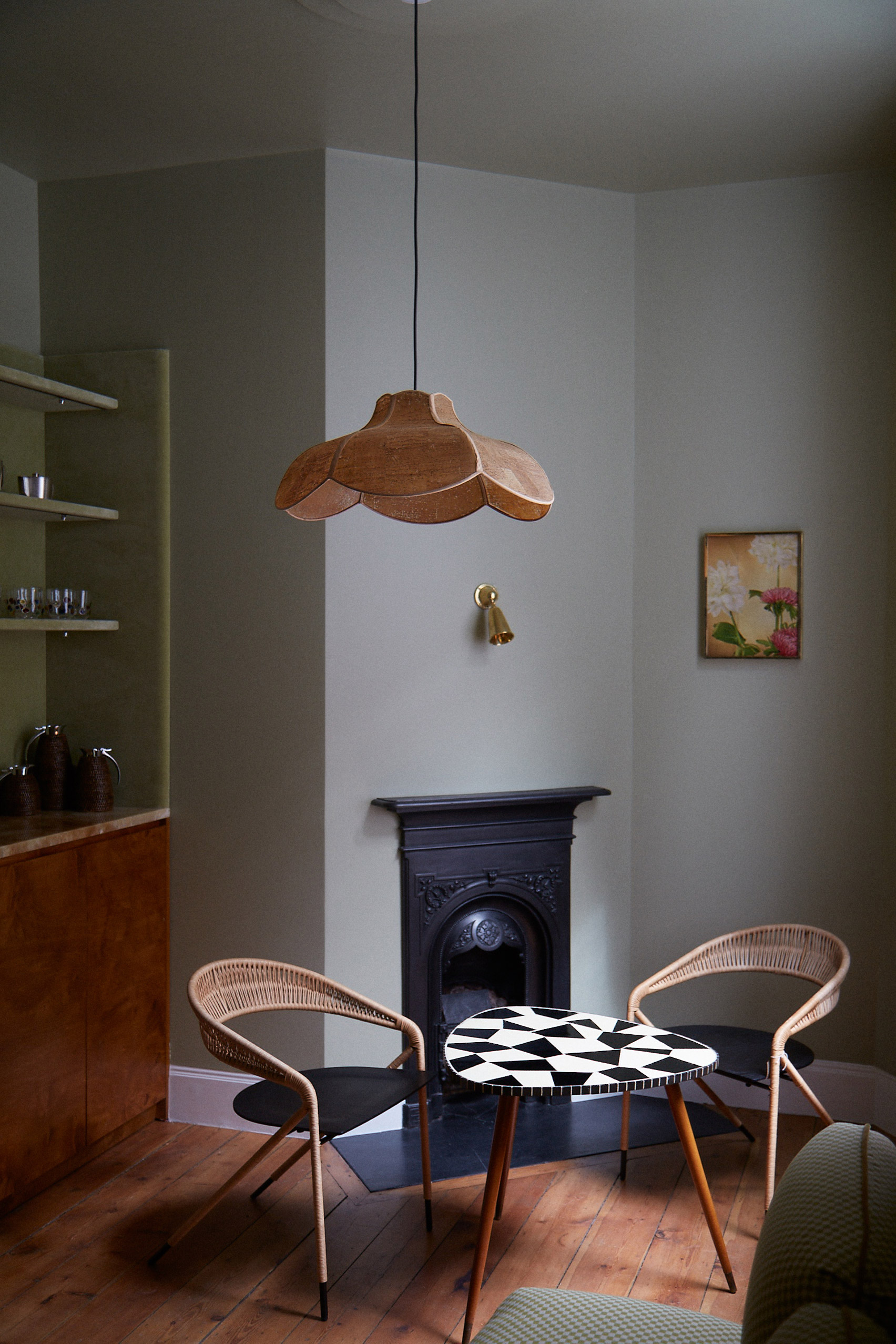 “The shops on Chiltern Street were originally built in the early Victorian era to accommodate the family of the shopkeeper, so there is an enormous amount of space behind the front shop,” Gabriel Chipperfield told Dezeen.

“We wanted to put it to good use and recreate part of the atmosphere of the original apartment in order to offer different experiences for our customers,” he continued.

“What has come from it is an Alice in Wonderland experience where you pass through from one world into another, and even down into another.” 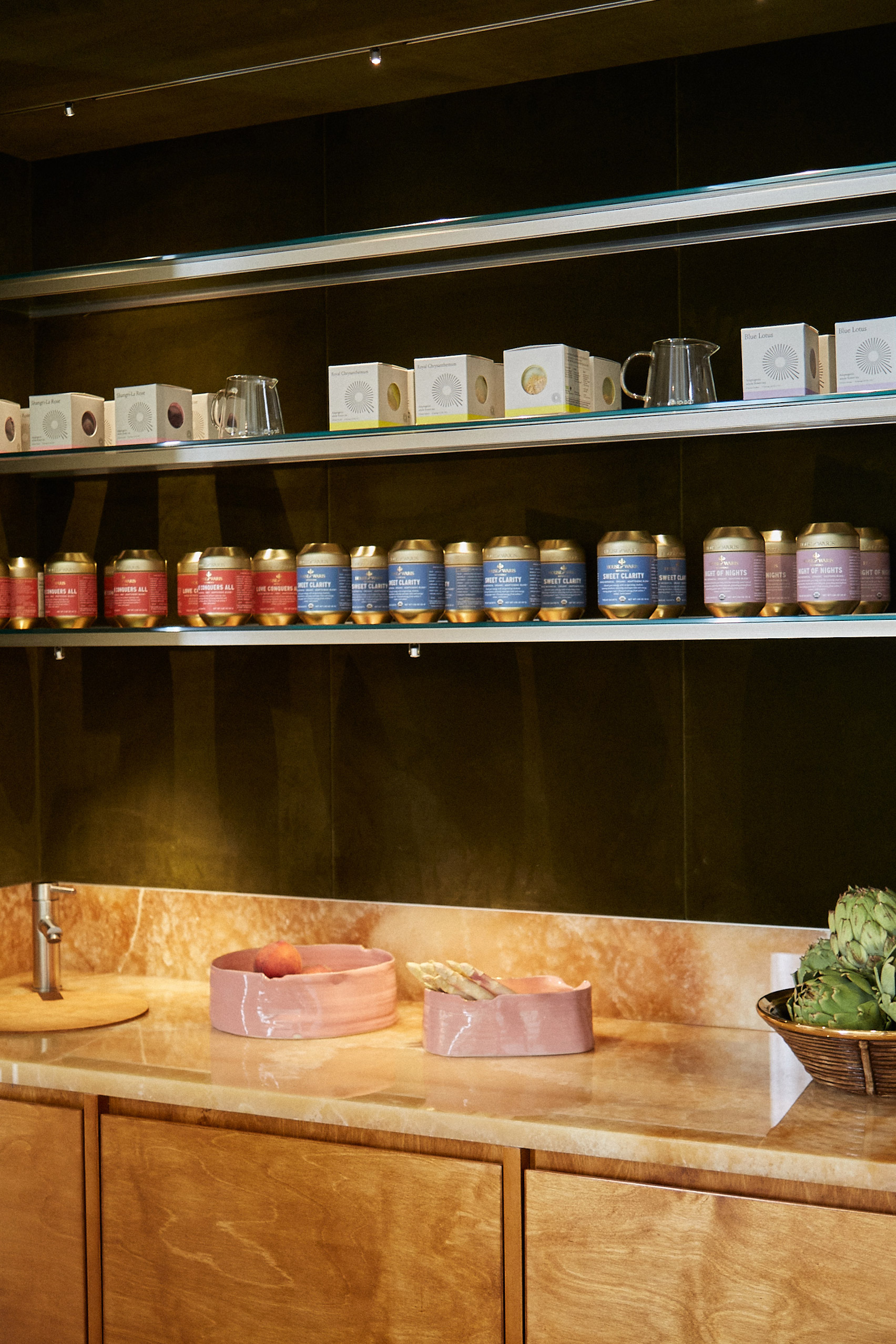 During six months of renovation works, a salon, reading room and coffee and pastry bar were created at the back of Shreeji News. Gabriel Chipperfield’s wife, curator Laura de Gunzburg, was then brought in to develop the interiors.

In the salon, surfaces have been painted a muted shade of grey-green. A pair of armchairs with woven cane backrests and a table with a graphic black-and-white surface top have been arranged in front of the room’s fireplace.

A scallop-edged pendant lamp has been suspended from the ceiling directly overhead. 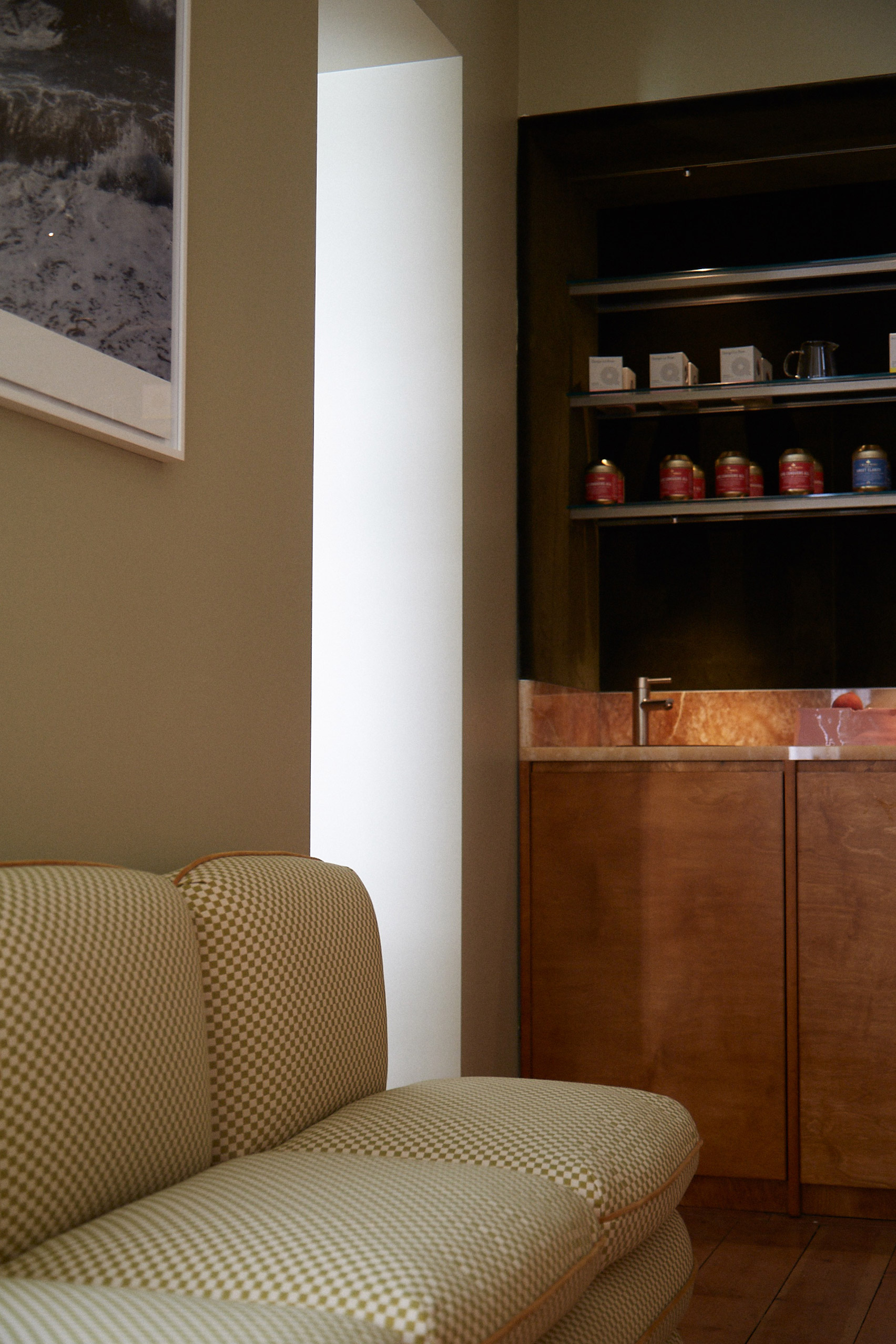 Along the rear of the room runs a stained-plywood cabinet displaying different coffees that customers order. Extra seating is offered by a handful of plump, stripey Pillow Chairs by Will Cooper – design director of studio ASH NYC.

Rows of glassware are presented against a mustard-yellow wall. 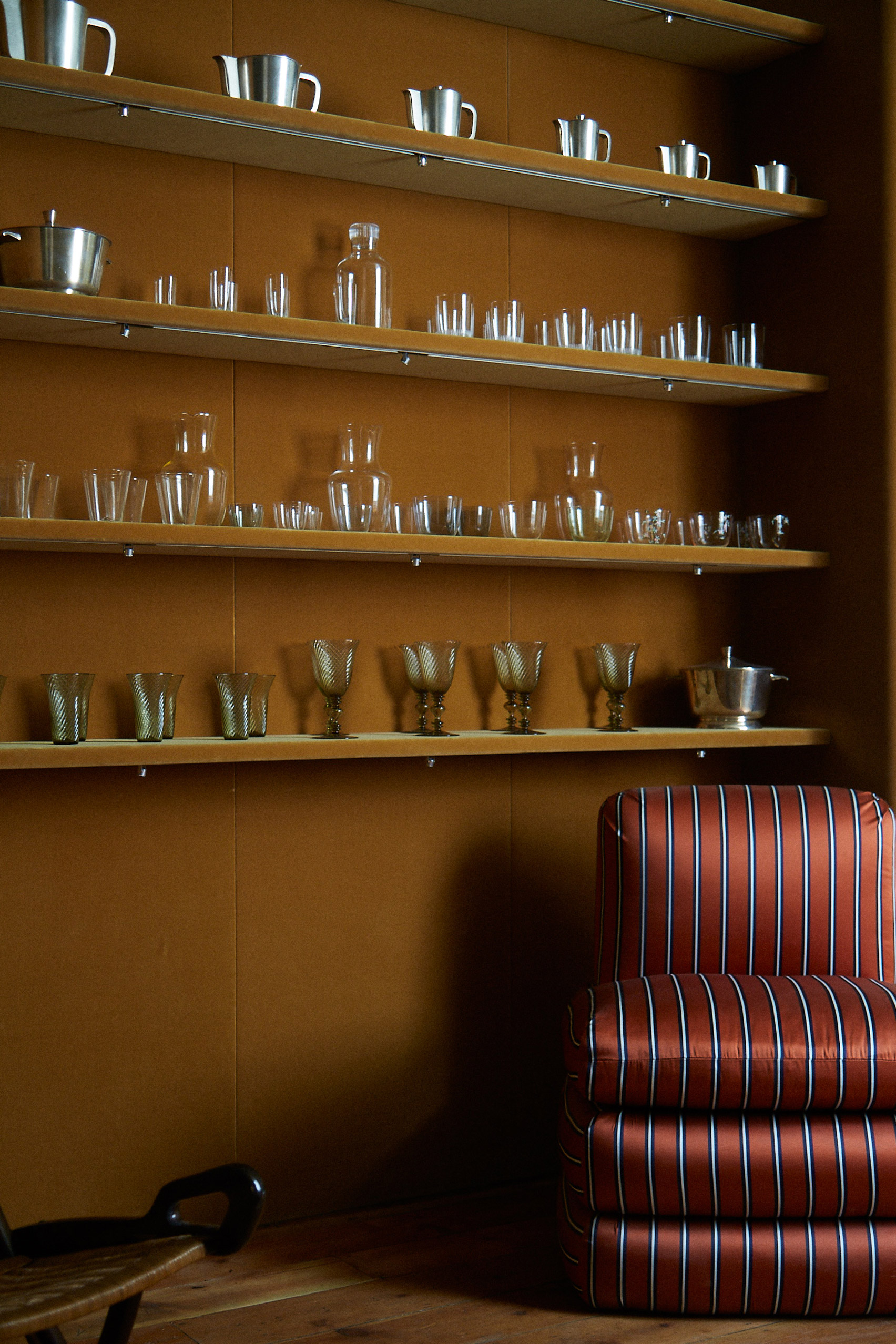 A short corridor leads through to the front of Shreeji News, which has been refitted with floor-to-ceiling shelves also crafted from stained plywood.

Magazines are displayed here or presented in stacks on the central service counter that’s topped with honey-hued onyx. 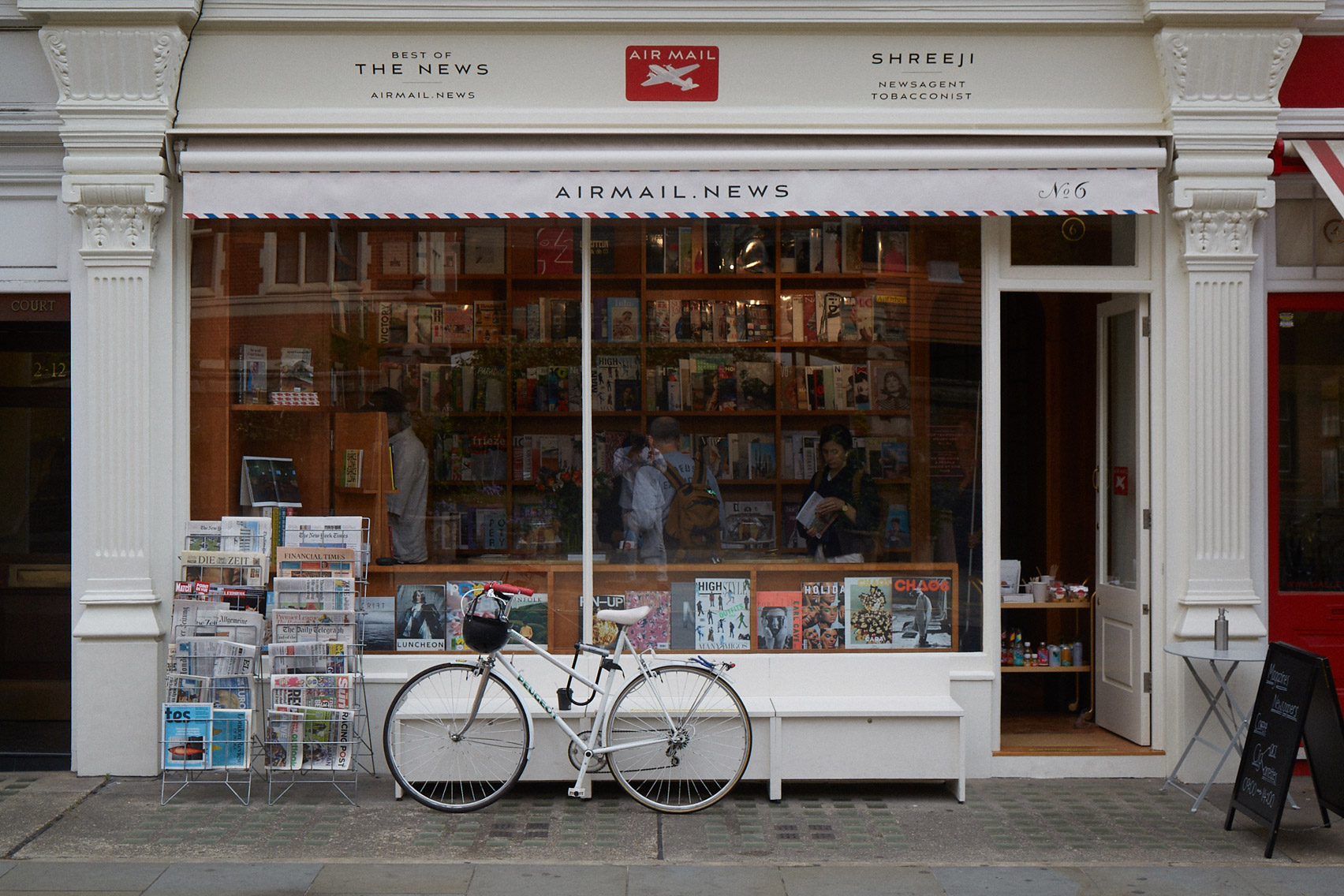 De Gunzburg has additionally curated a range of new and vintage homeware items that will be available to purchase in the newsagents, including designs from figures such as Gio Ponti and brand Lobmeyr.

“We hope to have this be a melting pot of our many interests— a space where we can promote dialogue on design, art, culture, travel and so on,” added de Gunzburg.

Digital magazine Air Mail has also partnered with Shreeji for its reopening. The magazine will be available to read on iPads in the shop’s reading room, and its red-and-blue branding will also feature on the facade and to-go coffee cups.

Marylebone is home to a host of other shops and boutiques. Others include The Drug Store, a gallery-style retail space that sells a range of products infused with CBD.