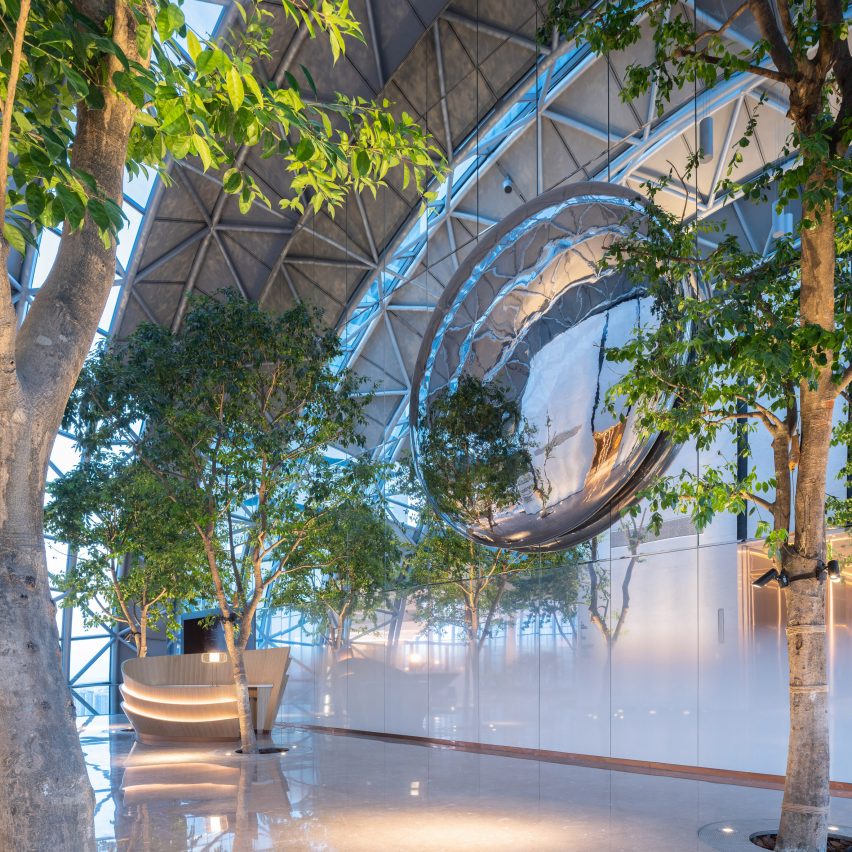 Sailing and nautical aesthetics informed CL3’s interiors for the Intercontinental hotel in the Raffles City Chongqing complex in China, which includes guest rooms that draw on the design of yacht cabins.

The hotel’s location in the city’s Chaotianmen area, where the Yangtze and Jialing rivers meet, was the starting point for the designers.

“The project has a geographical and historical significance by being where the ancient emperor sent his fleet to meet the people,” CL3  said. 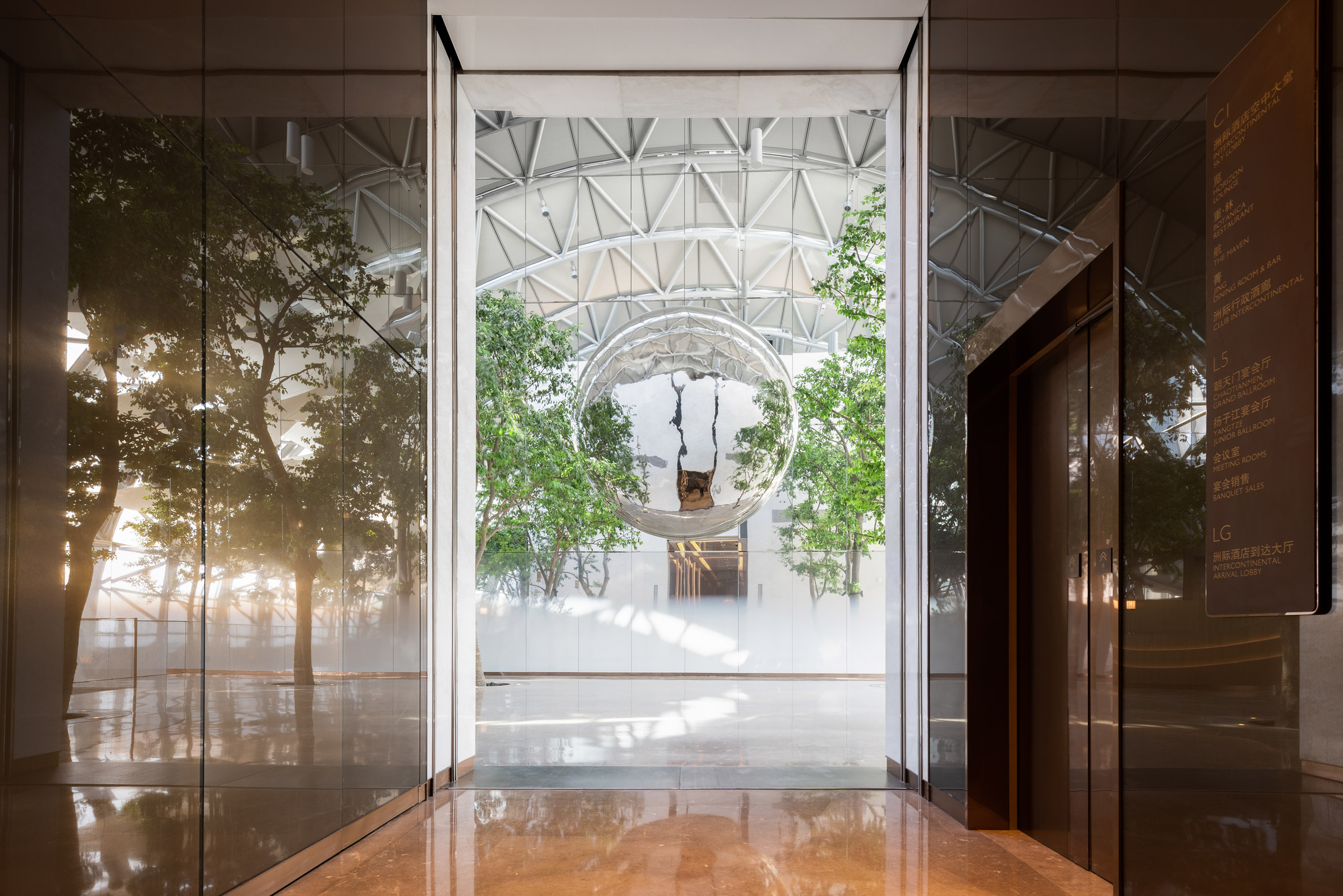 This nautical past not only informed the design of the eight streamlined skyscrapers that make up the Raffles City Chongqing complex, which features sail-like screens, it was also carried through into the interior design.

CL3 was approached to create the interiors after working with architect Moshdie Safdie of Safdie Architects on the Marina Bay Sands project, and designed the interiors of the hotel’s main areas as well as the residential lobby and common areas for five of the towers. 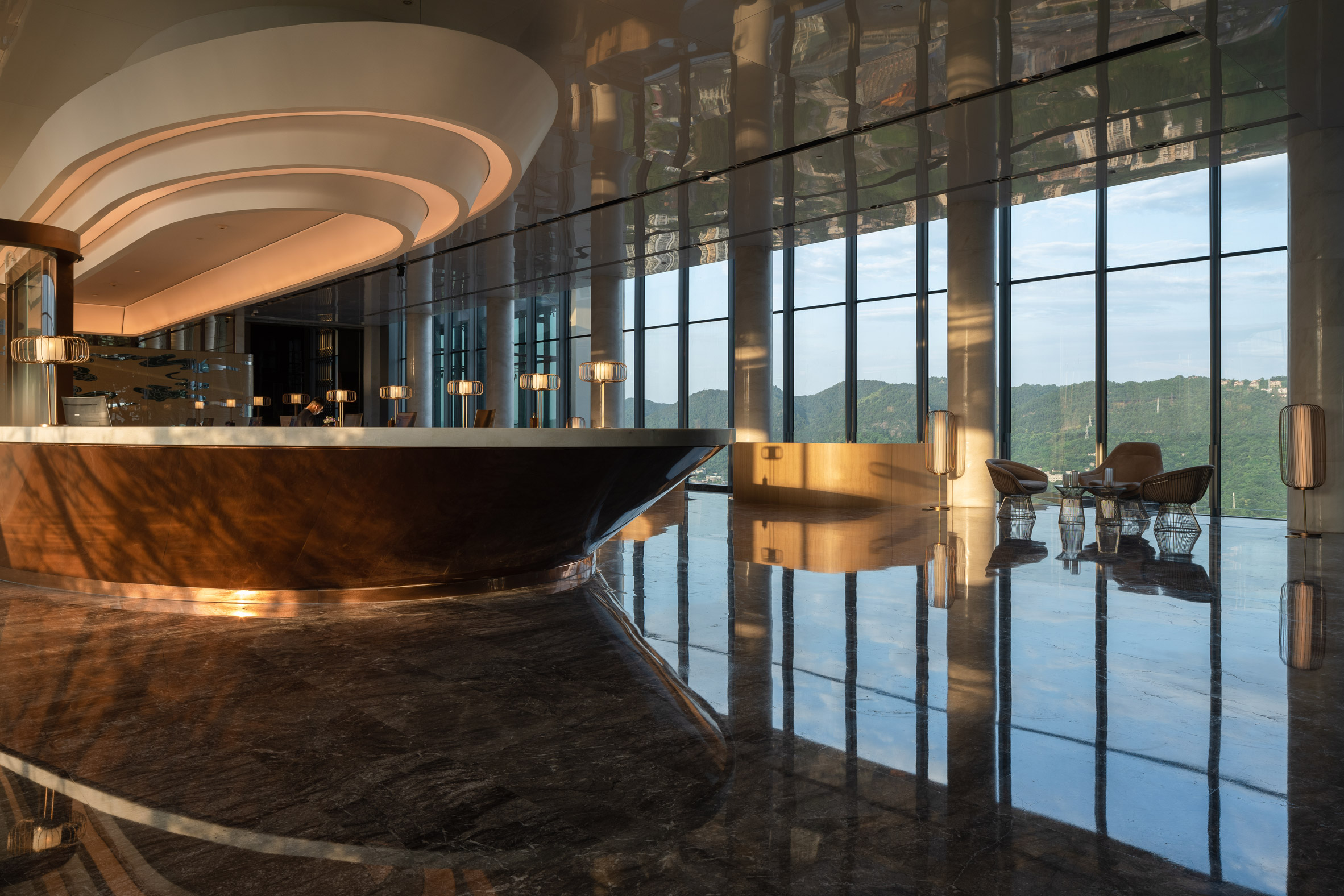 The studio was also responsible for the design of the residential clubhouse inside the signature Crystal skybridge that connects four of the towers.

Intercontinental Chongqing Raffles City’s grand reception is located on level 42 at the skybridge and nods to the sailing theme with a reception desk shaped like the hull of a ship, complemented by lighting in the same shape. 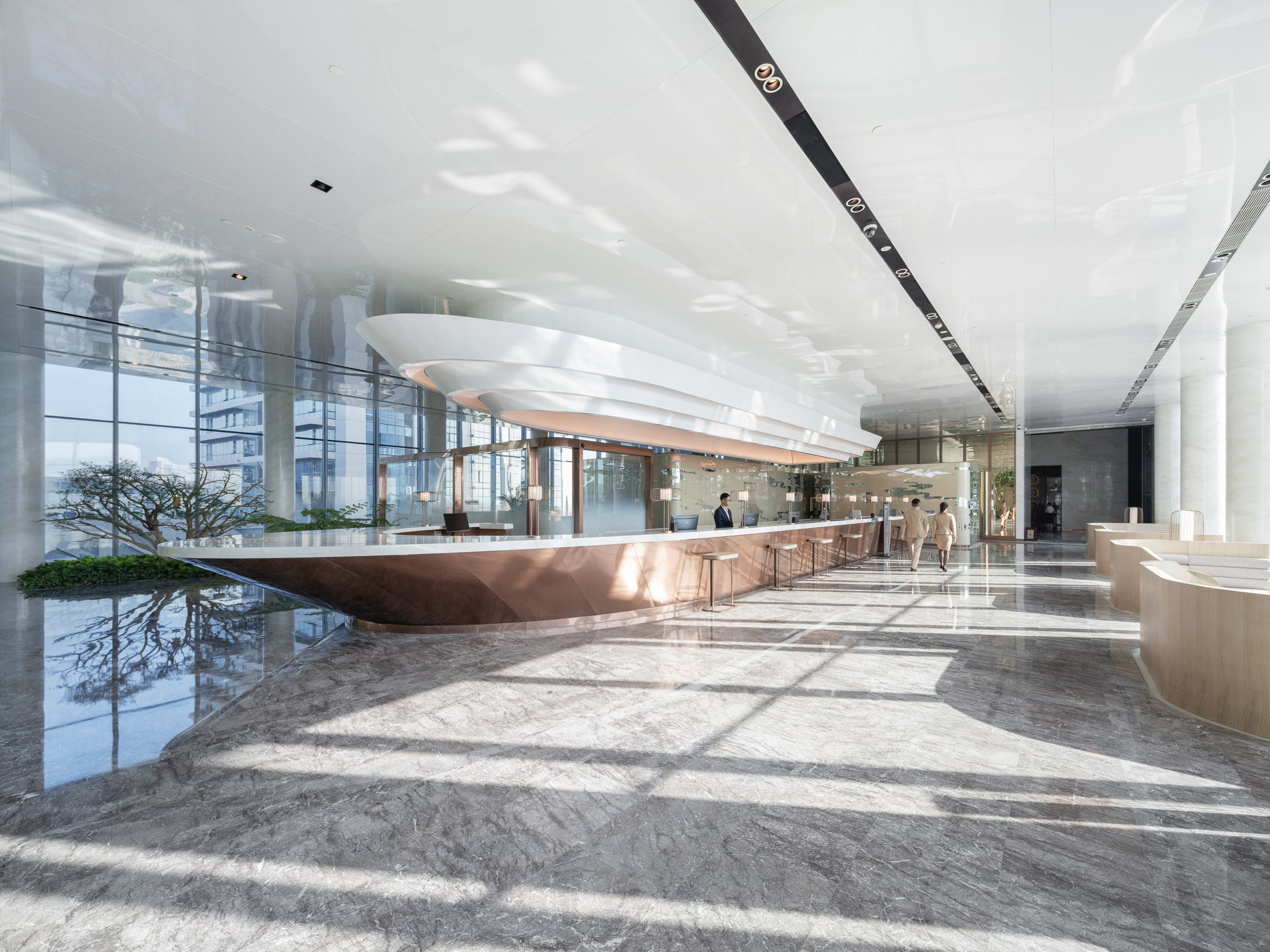 “The shape design echoes the water reflection during sailing in the river,” the studio said. The link bridge reception area was also decorated with marine-themed Chinese motifs and crafts.

In the arrival lobby area, CL3 added stylised drawings of traditional ships to the mirrored walls of the elevators. 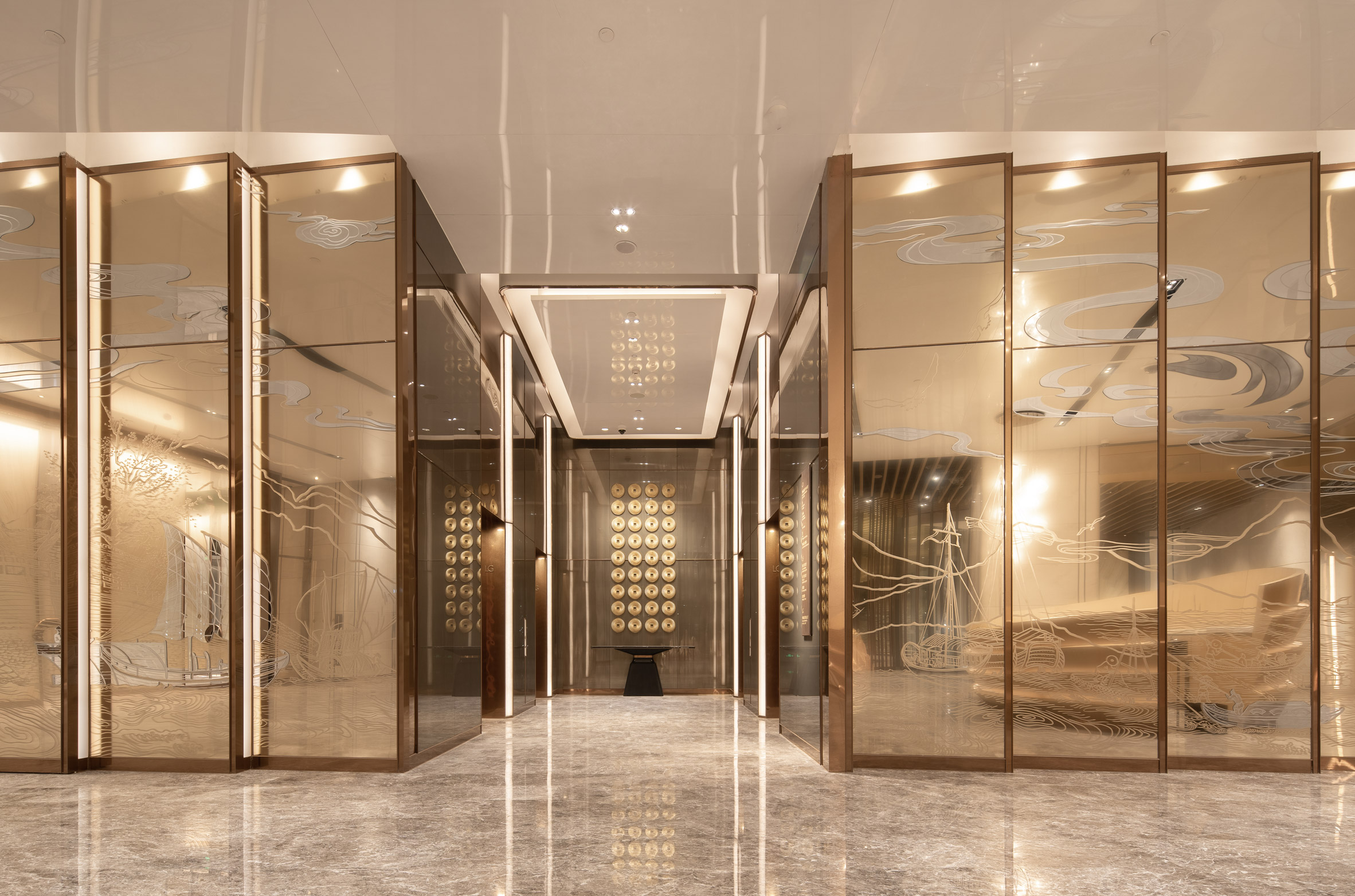 The lobby lounge was designed to create a “mountain landscape in the sky” and filled with green plants under an arc-shaped dome.

It features views of the skybridge that stretches across the skyscrapers, which visitors can enjoy from enveloping seats in pale wood with an undulating, wave-like shape. 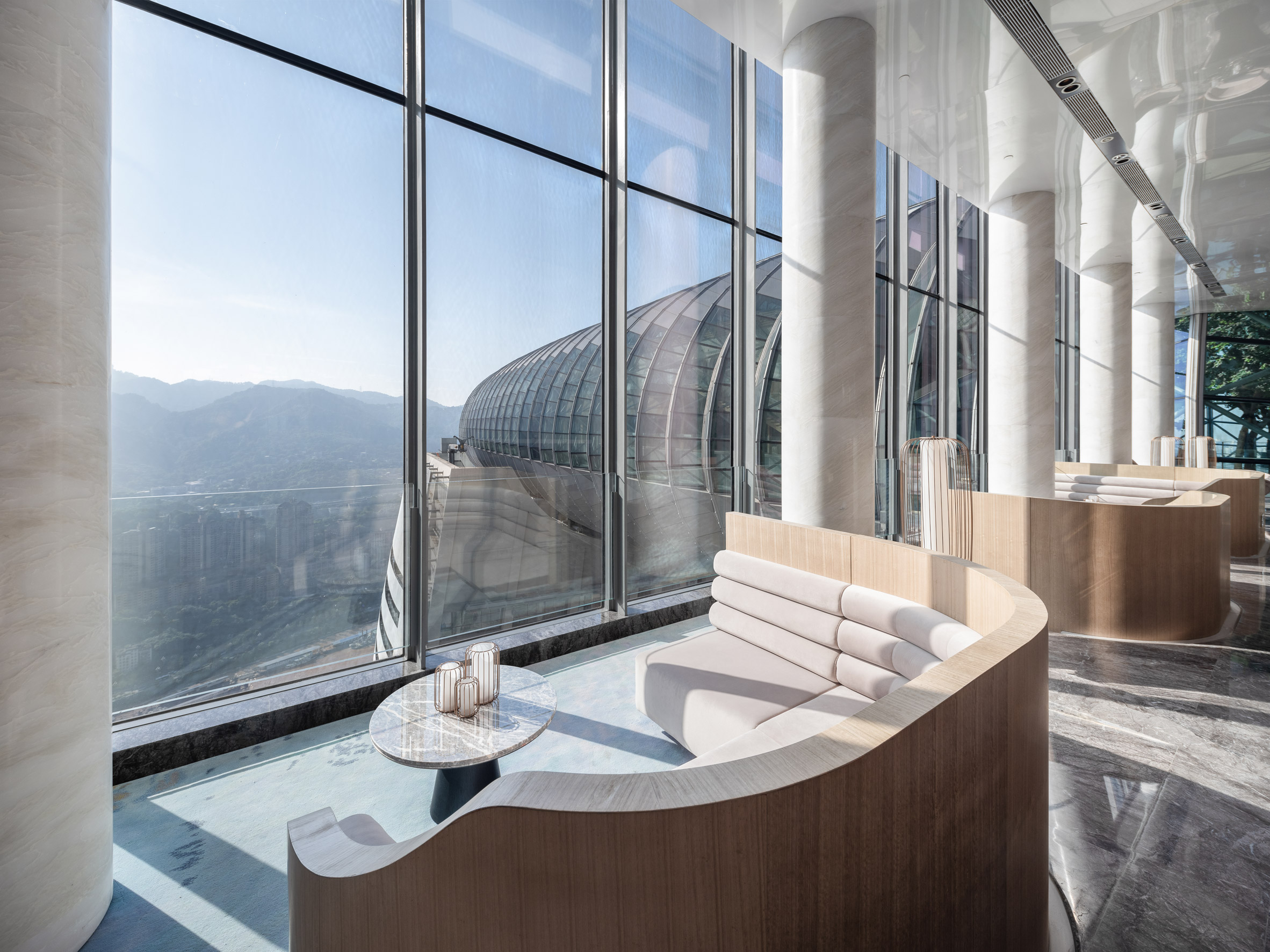 For the interior of the hotel rooms, the studio used pale wood combined with beige and cream colours and softly curved walls.

“The inspiration from the timeless ultra-luxury of contemporary sailing vessels is reflected in the ambience, furniture selections, finishes and guest rooms, ” CL3 said. 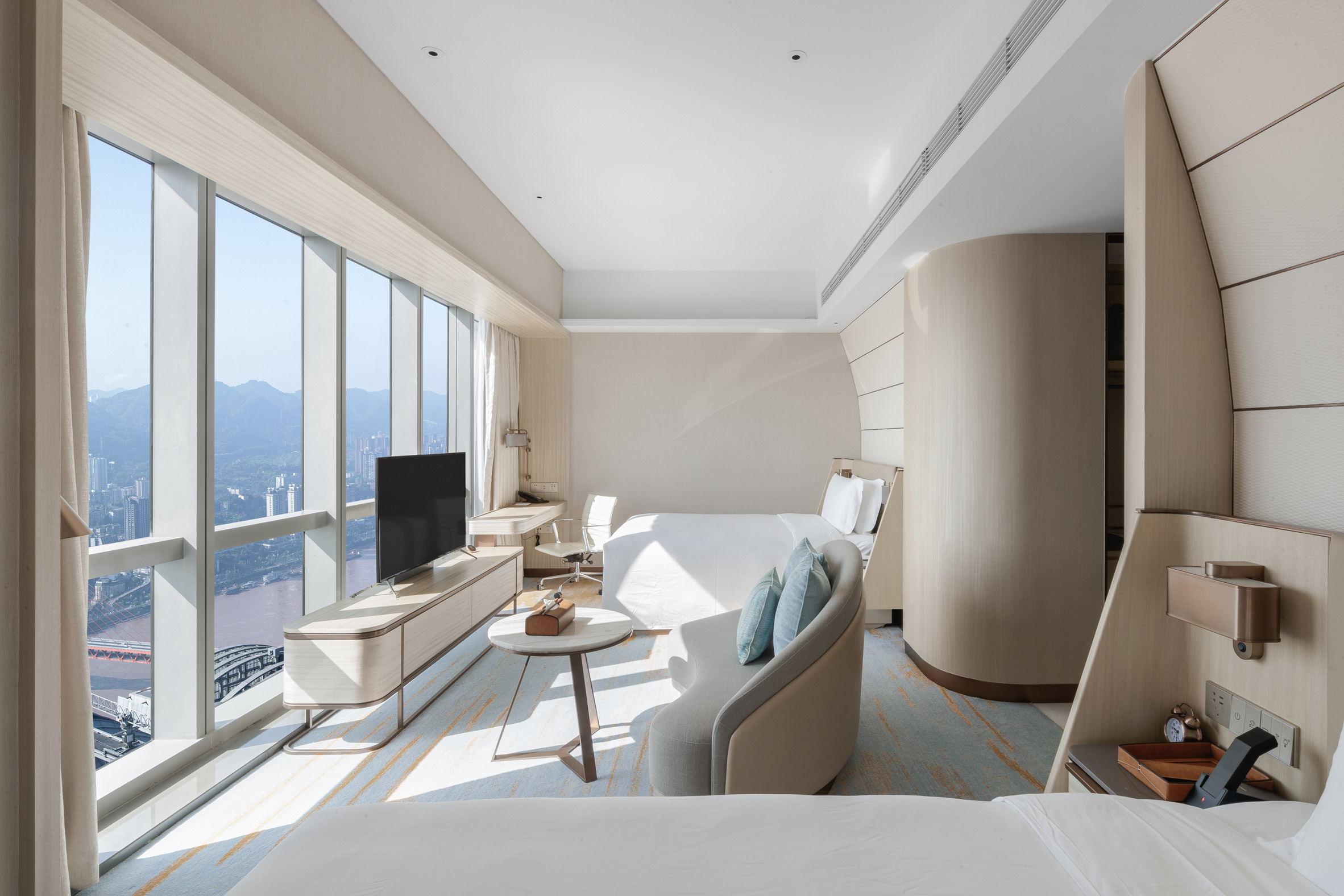 The nautical theme is less apparent in the Jing restaurant, which has a dark stone floor and peacock blue detailing.

The distinctive bar, where guests can sit and enjoy a meal, has been decked out in pale blue, bright blue and white stripes that pick up the blue hues in rest of the room. 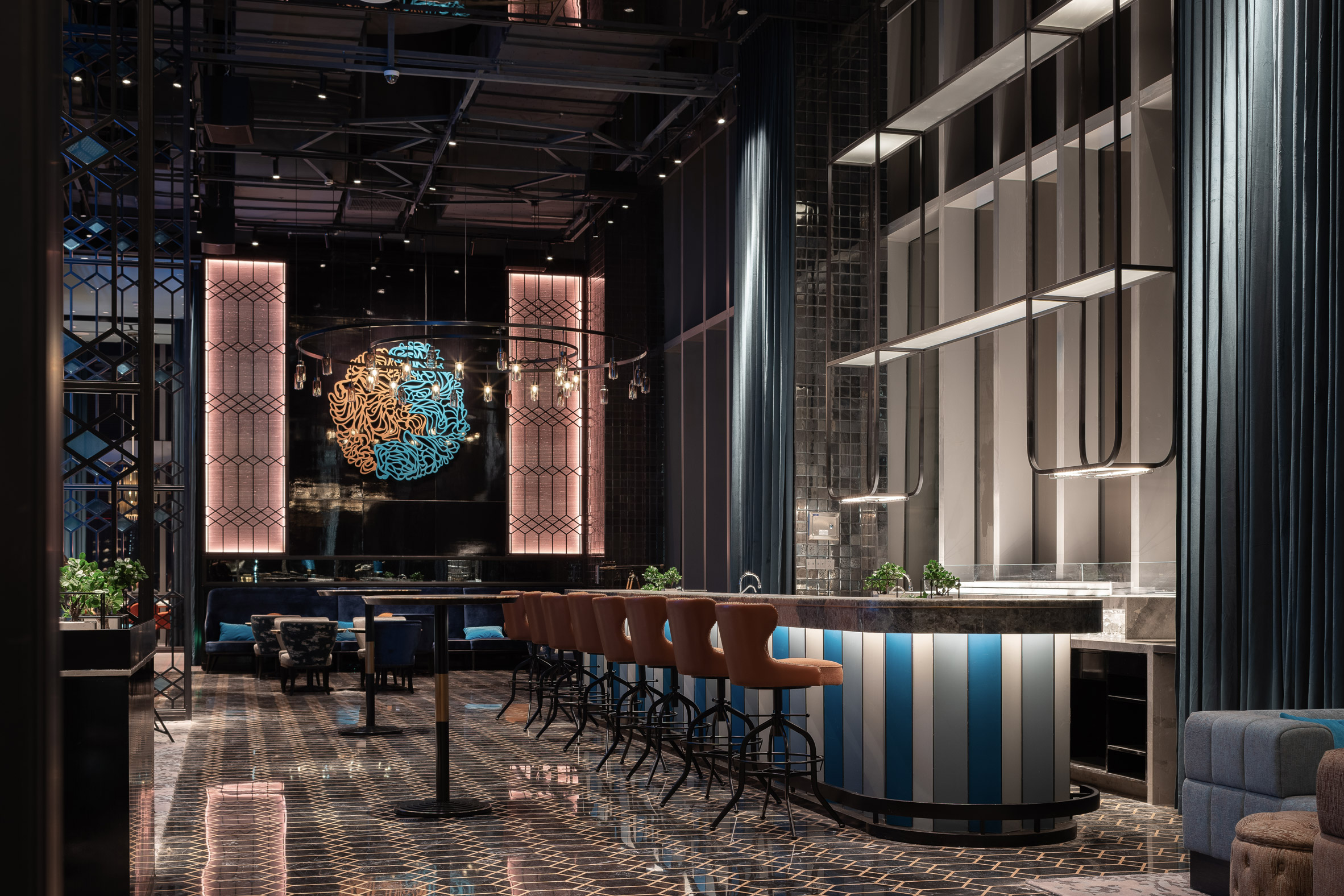 CL3 was also behind some of the residential areas in the complex, including the residential clubhouse inside the Crystal skybridge itself which has a swimming pool, gym and a spa, as well as private function rooms. 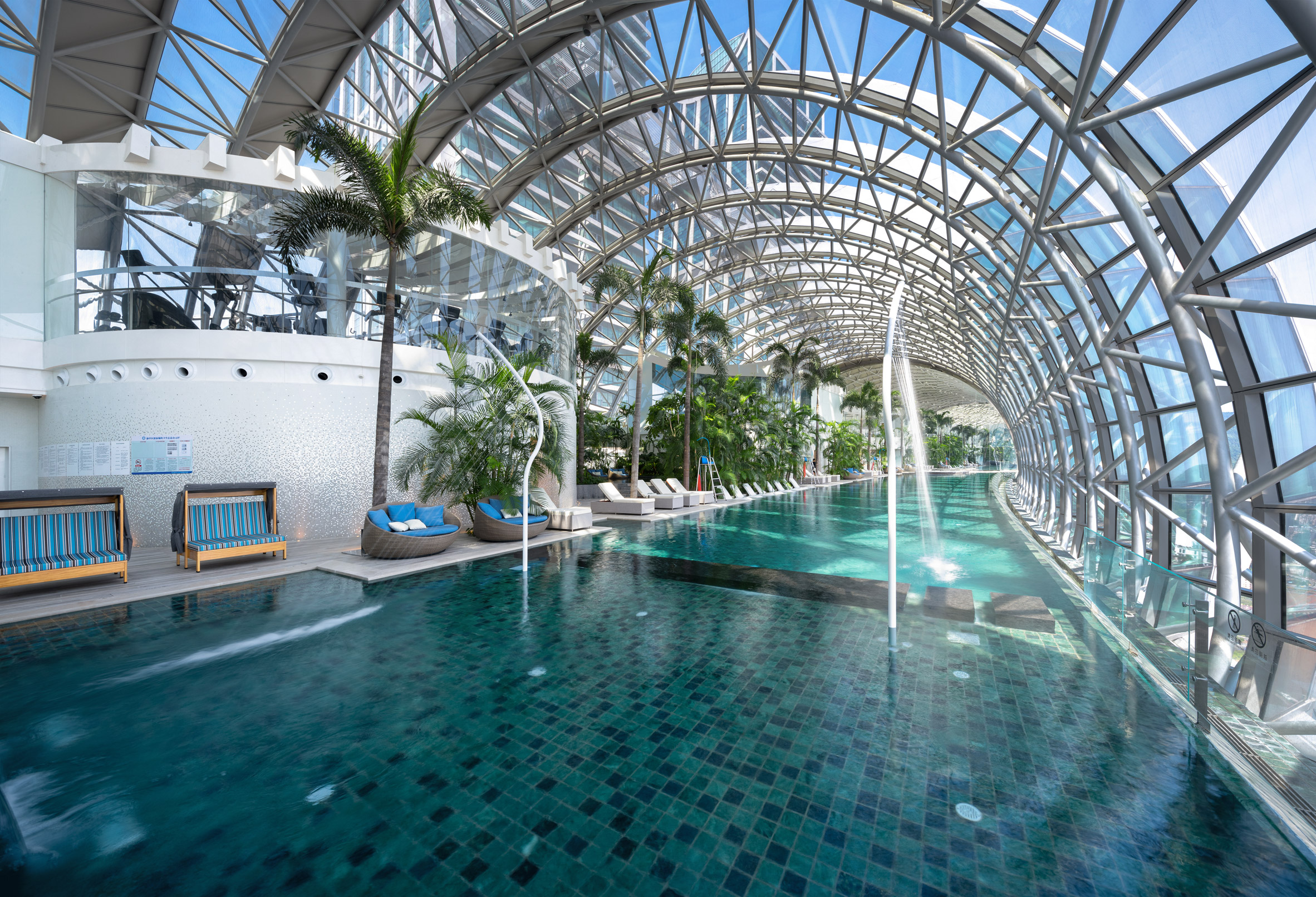 CL3 was founded in 1992. The studio is based in Hong Kong but also has offices in Shenzhen, Beijing and Shanghai.

As well as the Raffles City Chongqing complex, Safdie Architects also designed a housing development in the city, Eling Hill, consisting of a set of stepped homes on a hill overlooking the Yangtze River.

Photography is by Feng Shao.