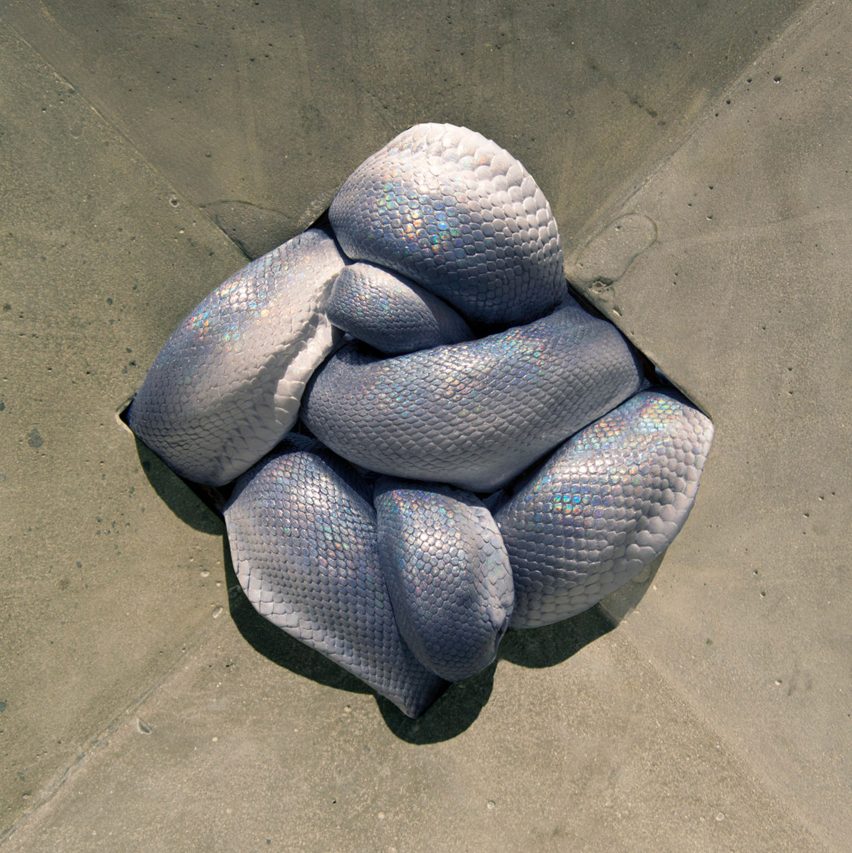 Twisting snakes with iridescent scales squeeze through concrete and polystyrene blocks in How To Behave At Home, the latest exhibition by British taxidermy artist Polly Morgan.

The How To Behave At Home exhibition, which looks at themes of societal norms and expectations, comprises a series of sculptures that feature the coiled bodies of taxidermied snakes.  Morgan believes the animal is an apt symbol for the way in which people utilise social media, particularly photo-sharing apps like Instagram.

“The skins of snakes are alluring, decorating what is essentially a killing and eating machine,” Morgan told Dezeen.

“These patterns are thought to either camouflage the snake or warn would-be predators away; some non-venomous snakes also mimic the bright colours of poisonous snakes to avoid capture,” she continued.

“The filters we apply to our social media feeds, either literally or just by our careful selection of one image over another, is done for similar purposes; to allow us to blend in and avoid crowd censure, or to allow a particular perception of us to flourish.”

Morgan had a loose idea of what How To Behave At Home’s themes would be from the beginning of this year.

However, as the coronavirus pandemic hit and millions across the globe were placed under stay-at-home orders, the artist gained a heightened awareness of the disparity between reality and the idealised content presented over social media.

This influenced the new work that she has created for the exhibition, as well as the selection of older pieces that have been included.

“Watching the changes in my own and others’ behaviour made me think more clearly about what the work represented and exactly how I wanted it to look,” she explained.

“I was interested to see how peoples’ Instagram feeds would change, with no parties to attend or events to promote; would they let the veneer slip or turn to a new kind of boastfulness,” Morgan added.

“I felt celebrities flounder; flaunting their luxurious life was irrelevant and unwelcome and they had to reconfigure their online selves – feeling squeezed and trying to be authentic, my ideas evolved a lot in that period.”

Some of the slithering creatures in the exhibition have been given a subtle iridescent coating, which takes cues from the colourful trompe l’oeil effects often seen in nail art.

Morgan – who has used snakes in several of her previous works – also referenced the appearance of sunbeam snakes, which have shiny, rainbow-like scaling.

“It struck me that using a highly iridescent snake was the ultimate way to represent the vibrancy of our complex lives,” said Morgan, who experimented with paints, varnishes and nail transfer foils to achieve the final effect.

“Having used the actual skins of snakes for years they suddenly felt inadequate; once they dry onto the form they lose a lot of colour and all their iridescence,” she continued. “I realised I’d been, literally, hidebound by taxidermy.”

“Uncharacteristically I went to have my nails done and requested an iridescent finish so I could watch the techniques and learn from them – the fact that nails are everyday veneers fed directly into the work I was producing.”

In the majority of the sculptures, the snakes appear as tangled piles squeezed through holes in concrete or polystyrene blocks.

Polystyrene was specifically chosen to mimic the “accidentally architectural” packaging that Morgan would receive whenever she ordered goods online during the lockdown period of the pandemic.

“The way these objects were cocooned in these protective forms seemed to parallel our own lives during lockdown, safeguarded in our homes,” she explained.

The artist also thought the twisting shape of the snakes reflected how people can shape themselves to adhere to societal expectations.

“The title of the show, How To Behave At Home, comes from a chapter heading in a Victorian book on etiquette,” Morgan revealed.

“Etiquette, just like architecture, can encourage us to behave a certain way, to contain our baser instincts and to conform to certain rules,” she added.

“We no longer have books on etiquette but we do have a new set of social strictures that proliferate online, and I see people contort themselves in every direction in order to avoid censure.”

Polly Morgan is based in London and has been practising sculpture and taxidermy since 2004. The artist’s How To Behave At Home exhibition will be showing at The Bomb Factory in London from 14 October until 2 November 2020.

The post Squashed serpents feature in Polly Morgan's How To Behave At Home exhibition appeared first on Dezeen.