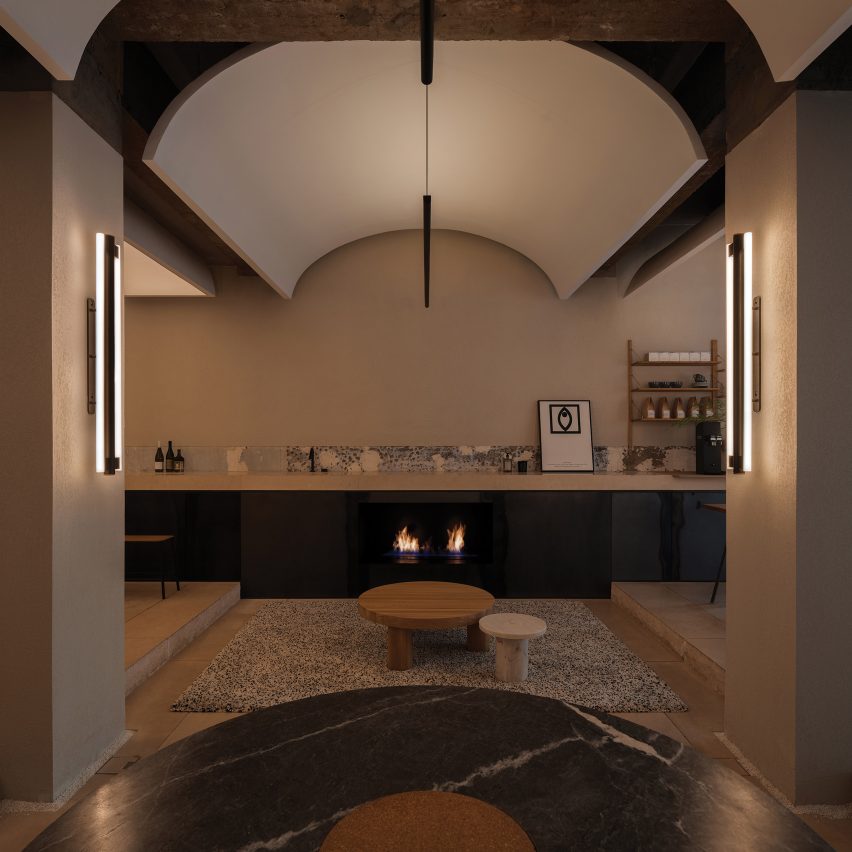 A series of mirrored panels obscure the cocktail bar that lies inside this shop-cum-cafe in Chengdu, China created by design studio Office AIO.

The shop, which is unusually called O, was named by its owner and the co-founder of Office AIO, Tim Kwan. 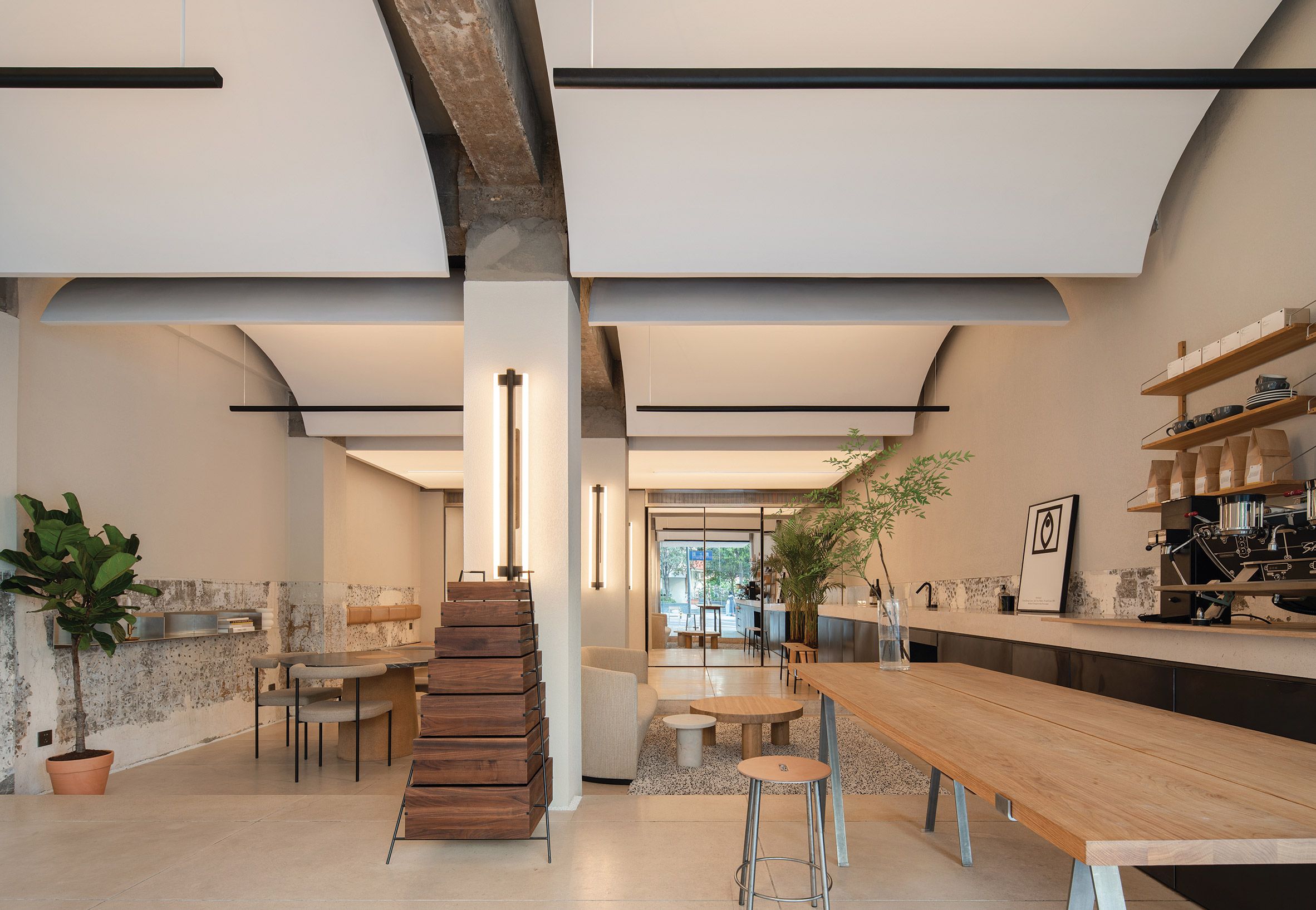 Taking the first letter from the word “object”, Kwan and the shop owner felt that O was the “perfect shape representing eternity – it has no beginning nor end, no direction nor a right way round”.

The looping shape of the letter O also nods to the shifting function of the 68-square-metre shop: by day it’s a cafe that sells and showcases a curated selection of lifestyle items and designer furnishings, while at night it turns into a bar. 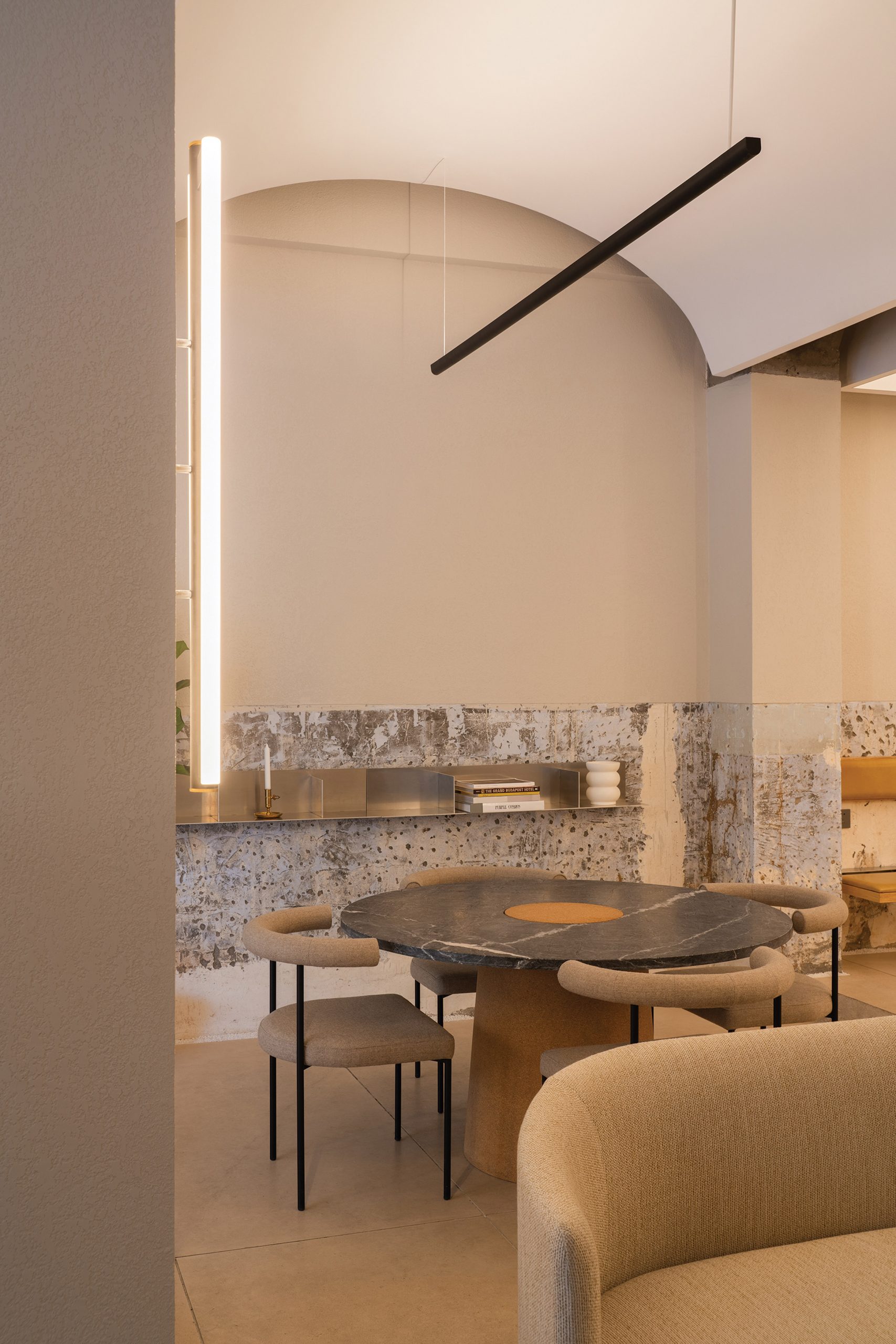 Down one side of the shop runs a lengthy sandstone counter where the cafe’s coffee machine is kept. Just in front is a long wooden table where the barista can prepare drink orders.

The base of the counter has been in-built with a fireplace, which can be switched on as night falls to evoke a cosier mood within the store. 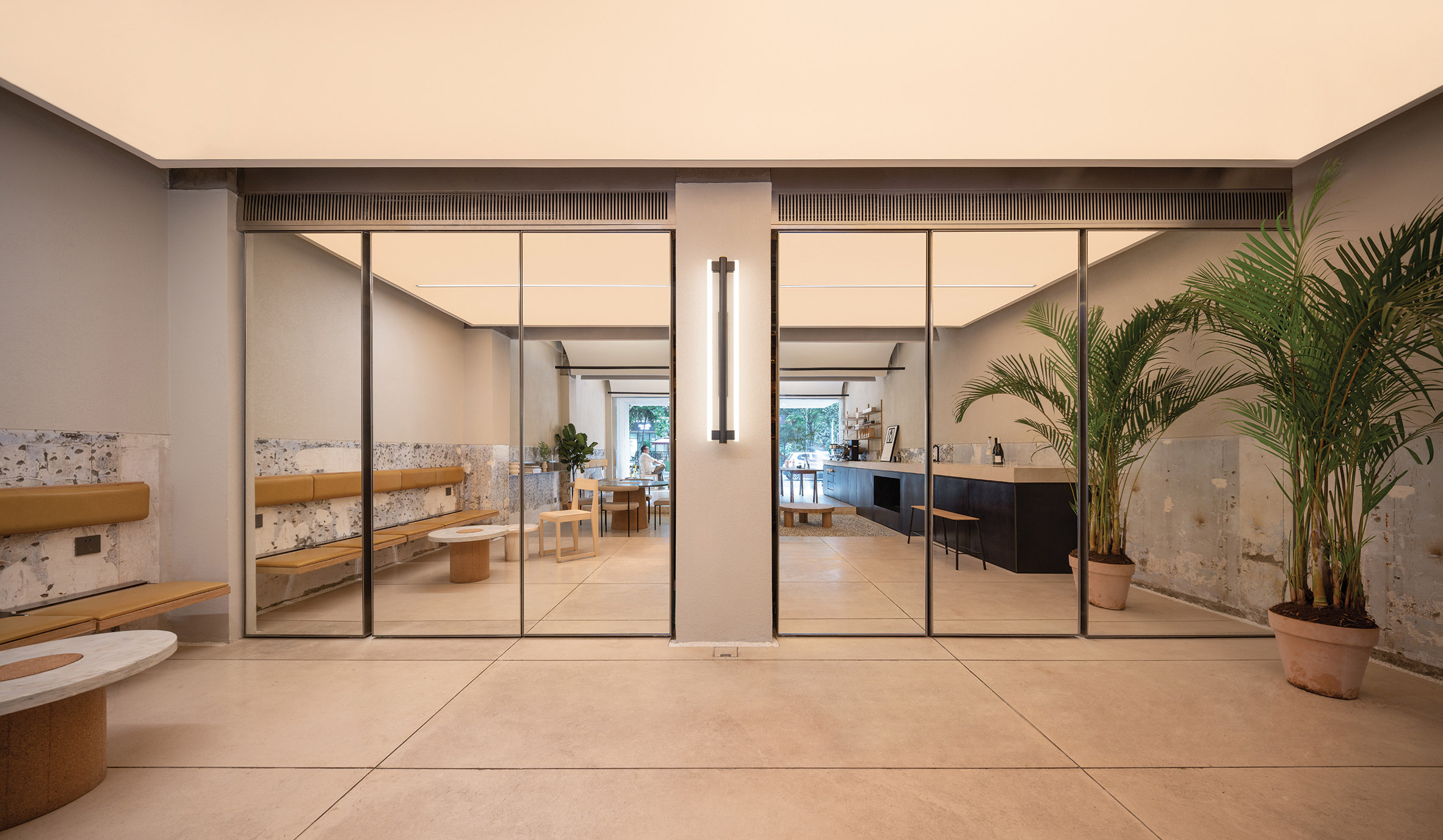 On the other side of the store is a silver-metal shelf where products are displayed and a row of fold-down seats upholstered in tan leather.

The rear of the store appears to be lined with mirrored panels, but these can be drawn back to reveal the night-time drinks bar. Liquor bottles line the inner side of the panels. 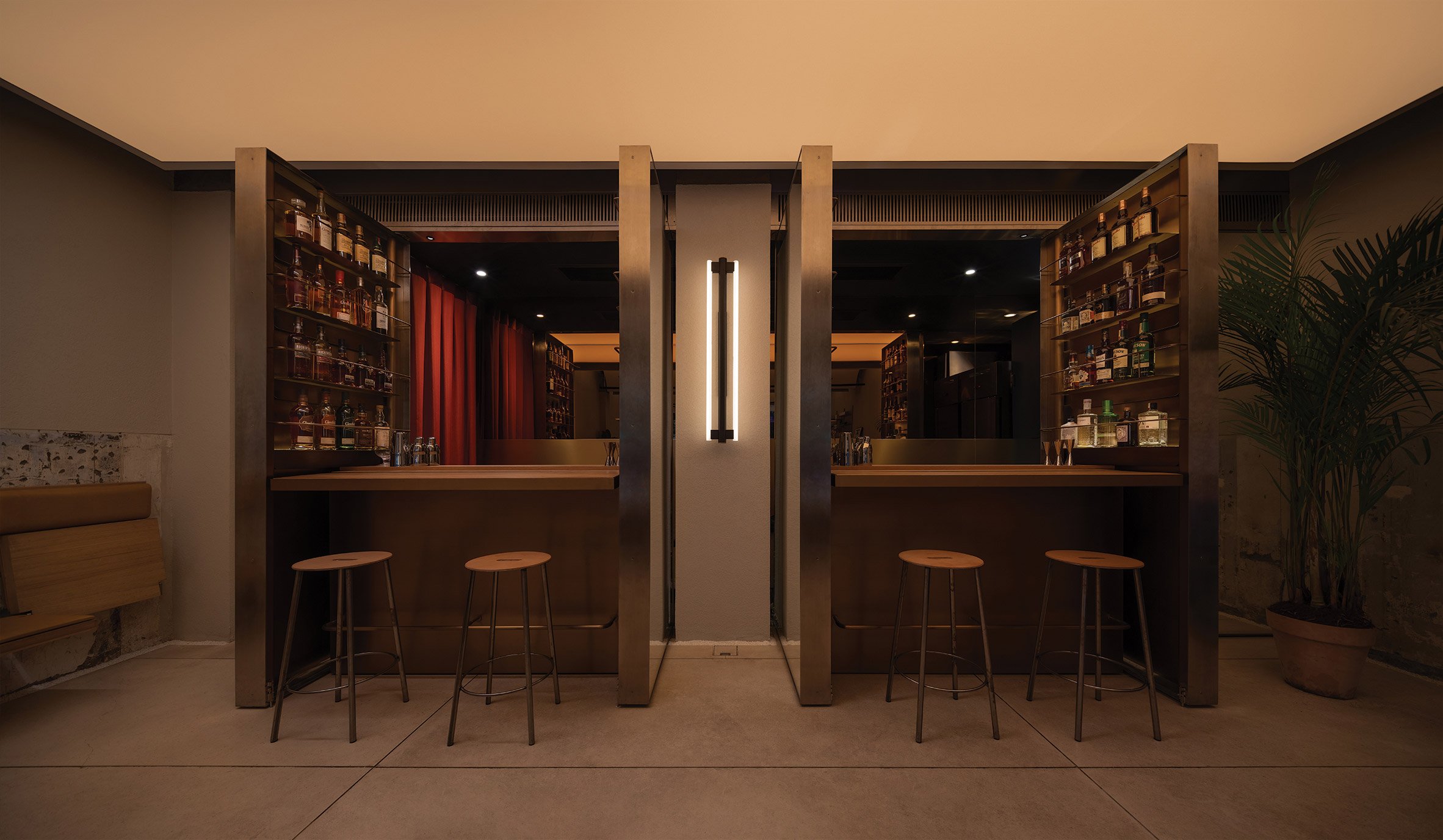 Surfaces throughout the rest of shop O have otherwise been kept simple. A patchy band of exposed concrete runs around the lower half of the walls, but off-white paint has been applied to the upper half.

Interest is added by a handful of potted plants and a sequence of arched screens that have been suspended just beneath the ceiling. 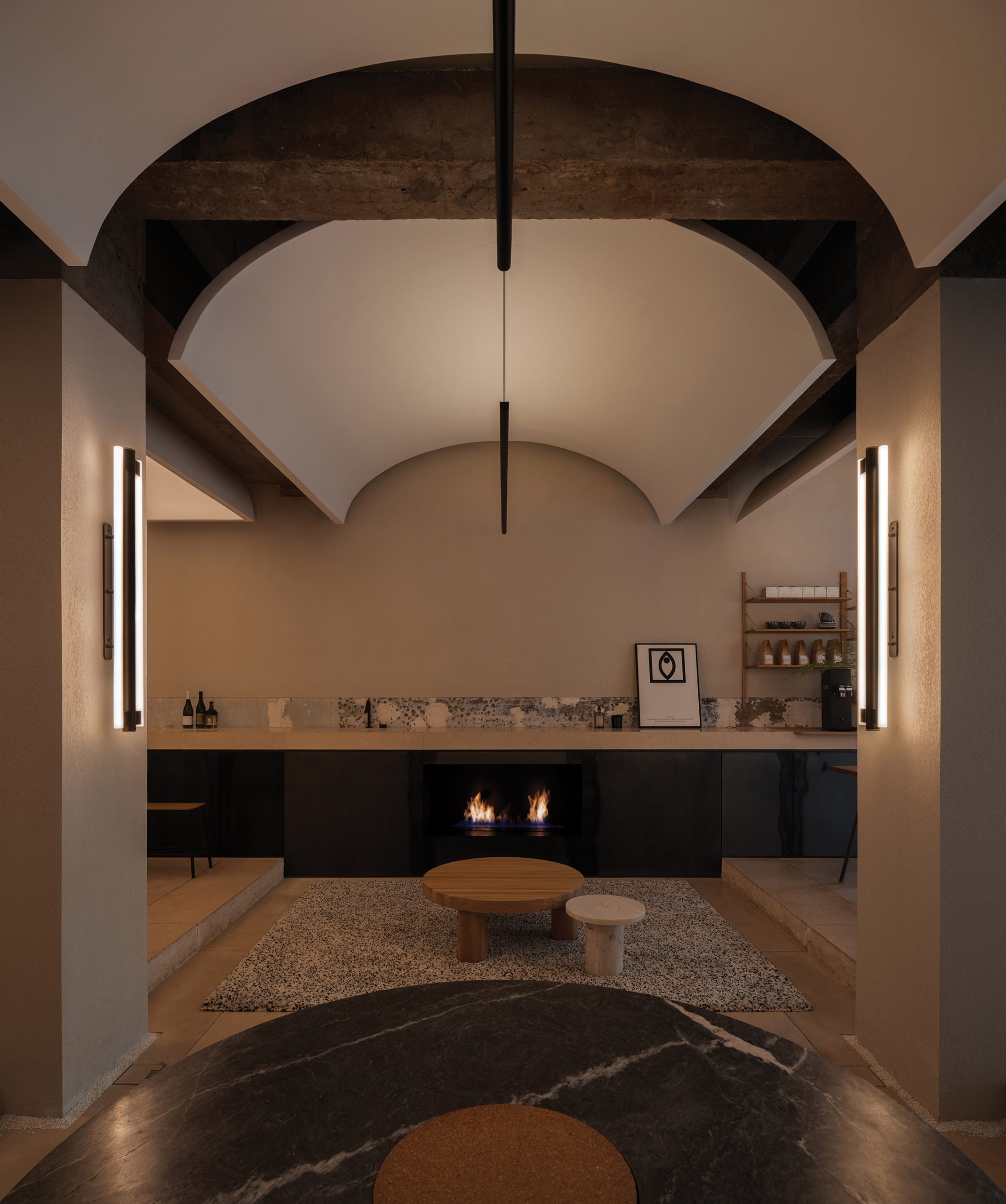 The last screen has been fitted with an LED strip light that can be adjusted to imbue the space with different colours.

“[The screens] bring a sense of character to the store without occupying any footprint,” explained the studio.

“We hope that this space will encourage quality ideas, objects, and people to interact and exchange, and ultimately reach a wholesome experience that is objectively desirable,” it concluded. 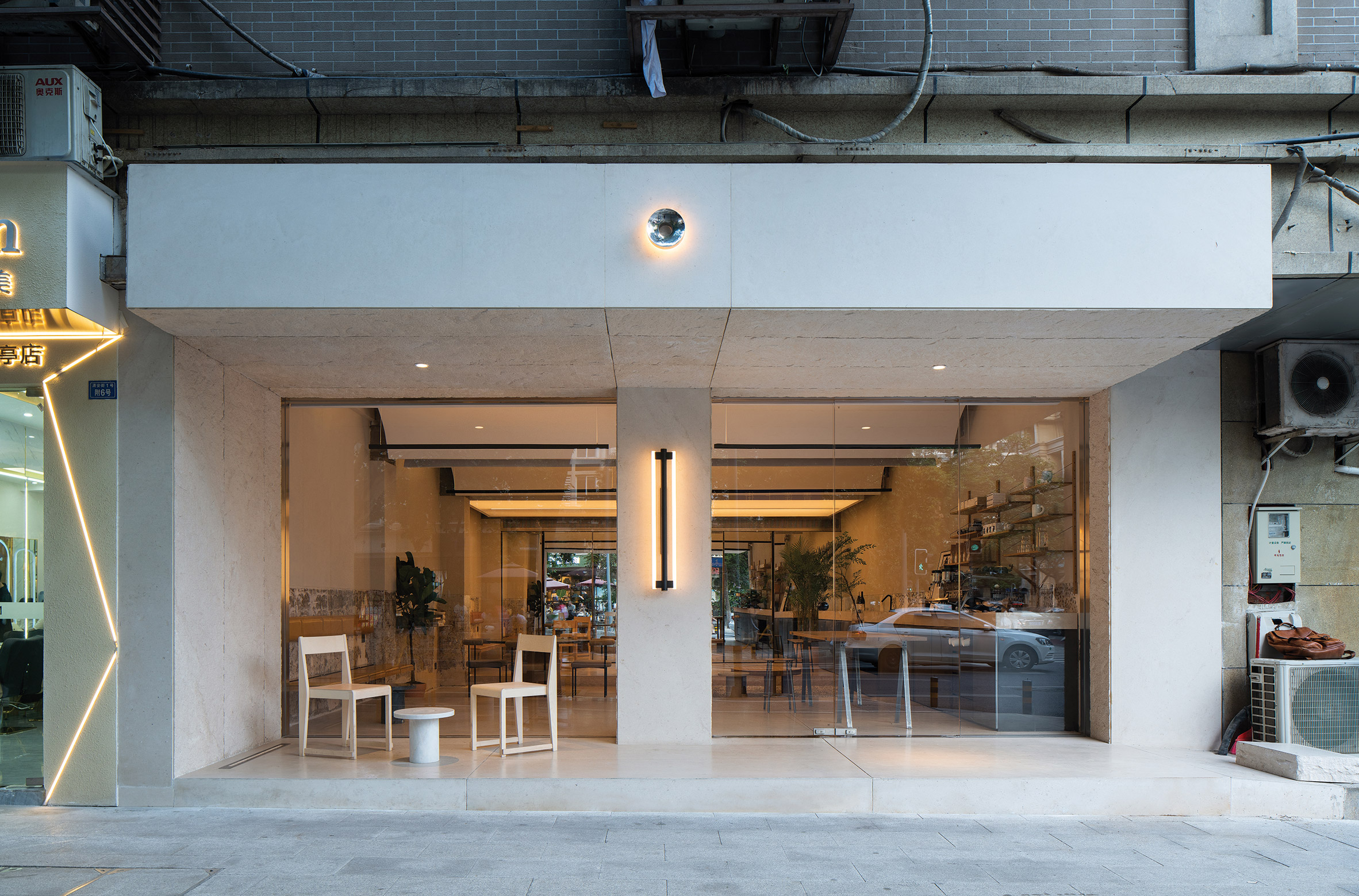 O by Office AIO is longlisted in the small retail interior category of this year’s Dezeen Awards.

It isn’t the first day-to-night venue that the studio has created – two years ago it completed Bar Lotus in Shanghai, which boasts emerald-coloured walls and rippling rose-gold ceilings. The project won the restaurant and bar interior category of the 2019 Dezeen Awards, when judges commended its mix of contemporary and traditional references.

Photography is courtesy of WEN Studio.

The post O shop in Chengdu is a lifestyle store by day and a bar by night appeared first on Dezeen.