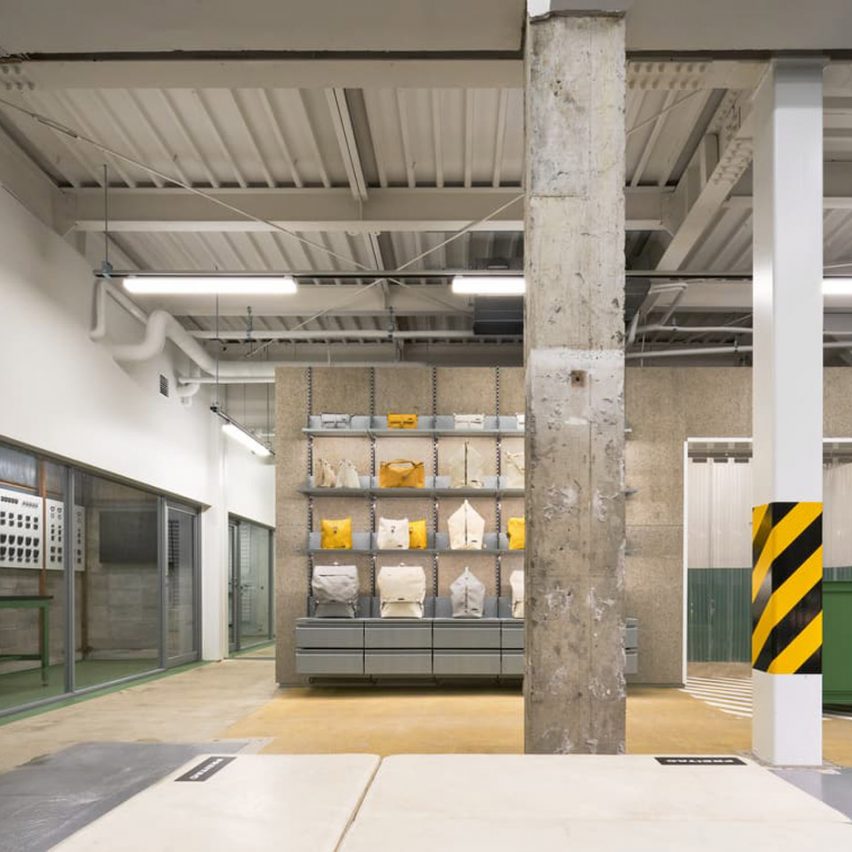 Hazard lines and metal shelving are some of the industrial finishes that Torafu Architects has included in bag brand Freitag’s store in Kyoto – which even includes its own workshop.

Freitag‘s Kyoto store, which is shortlisted in the small retail interior category of the 2020 Dezeen Awards, occupies what was formerly two separate retail units in the city’s Nakagyo-ku district.

The interiors of the store have been designed by Torafu Architects to look like Freitag’s logistics warehouse at the brand’s headquarters in Zurich, Switzerland.

Industrial-style details have been incorporated throughout the 80-square-metre space, which the architecture practice said they left in a “skeleton state”. For example, black-and-yellow hazard lines have been painted around one of the store’s structural columns.

Similar lines appear beneath the green cash desk. Just opposite sits a matching rubber-topped counter where customers will be able to set down and inspect any potential purchases.

PVC flap curtains were used to screen off the shop’s storeroom, which is enclosed by a volume clad in wood-wool boards. Simple strip lights have also been fitted across the ceiling.

Bags are displayed on metal shelves or on top of pallets which have been stacked up in the store’s front window.

Uniform rows of drawers that run across the entire left-hand side of the store contain more Freitag bags, each of which is crafted from recycled truck tarpaulin.

The brand first removes any eyelets or straps left on the tarps before cutting, washing and turning them into a range of different bag models such as backpacks, totes or holdalls.

Towards the rear of the store is a workshop, where customers will be able to experiment with using tarp offcuts themselves and turn them into a small accessory of their choice.

More industrial touches appear on Freitag’s facade, where a red-steel beam has been installed in place of the wall that once divided the two retail units.

A large drawing of a truck has also been created on the store’s side elevation so that customers “never forget the origin of every unique specimen”.

Torafu Architects was founded in 2004 by Koichi Suzuno and Shinya Kamuro. The practice’s Freitag Kyoto store will compete against four other projects in the small interior category of this year’s Dezeen Awards.

Amongst them is an Aesop store in Shinjuku, which features a contrasting mix of steel and plaster surfaces.

Also on the list is Small Icon, a tiny bakery in Yokohama that’s decorated in the same warm, golden hues as a loaf of bread.

Photography is by Taichi Ano.

The post Freitag store in Kyoto is designed to resemble the brand's own warehouse appeared first on Dezeen.