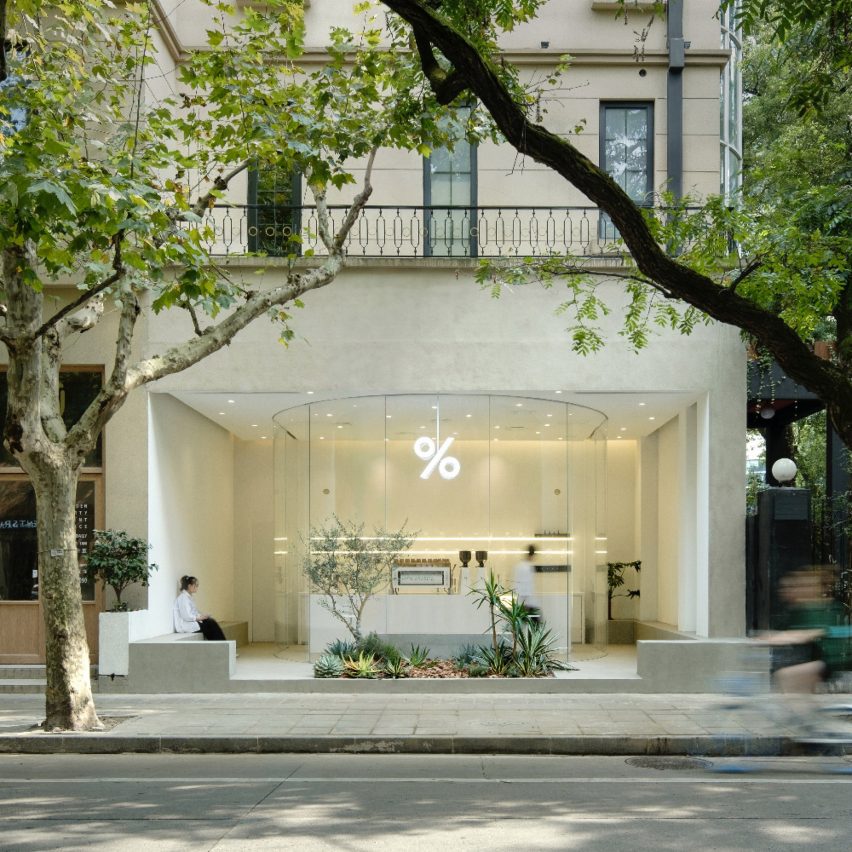 Beijing-based BLUE Architecture Studio has renovated the % Arabica West shop in Shanghai‘s Xuhui district, adding a glass box and a courtyard to open the cafe up to the surrounding neighbourhood.

The studio‘s aim for the 50-square-metre renovation was to break the boundary between the commercial space and the street.

To do so it designed a U-shaped glass box, which contains the coffee counter, till and preparation area, in place of a regular facade. The box is surrounded by a courtyard-style seating area.

“The space is completely opened up to form a small courtyard around a U-shaped glass box,” the studio said.

“Curved glass doors that can be completely opened, and ground materials that extend in from the outside.”

BLUE Architecture Studio also took the minimal style of % Arabica’s shops into consideration when creating the design, which has been shortlisted for Dezeen Awards 2020 in the restaurant interior category.

“Green plants become the protagonist of the space, blurring the boundary between indoor and outdoor.”

Built-in cement benches along the walls provide seating space, while green plants were used to enhance the courtyard feel and create a dialogue with the Chinese parasol trees that line the street.

“The shops make part of their commercial space outdoor and contribute to the city street,” Aoyama said.

“Although the commercial area of the shops is smaller, they create a rich three-dimensional street space experience, so that people’s life can truly relate to the urban space,” he added.

An air conditioning system was installed at the outdoor lounge area, as well as an air curtain machine at the entrance, to create a “more pleasant experience” in both winter and summer.

BLUE Architecture Studio was founded by Japanese architects Yoko Fujii and Shuhei Aoyama in Beijing in 2014.

Photography is by Eiichi Kano.